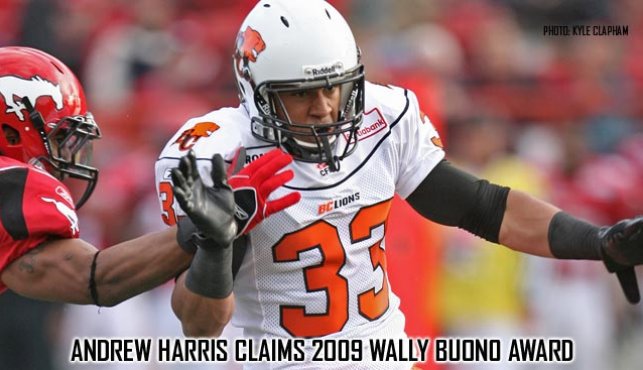 All-star running back Andrew Harris of the Canadian Junior Football League’s Vancouver Island Raiders has been named the 2009 Wally Buono Award winner, becoming the seventh junior football player to win the nationally coveted Wally Buono Award since its inception in 2003.

“Andrew was an outstanding player who represented his team off and on the field. He did whatever was asked of him – whether he was the star running back or a special teams soldier, he always did what was best for the team. I got the pleasure of knowing Andrew when he attended our training camp and I was impressed with his commitment and composure for such a young man,” stated Lions general manager and head coach Wally Buono.

“There was no question in my mind that Andrew was worthy of the award. Not only were his ‘stats’ outstanding but after getting to know him as a part of the BC Lions, he is a young man with a desire to be the best both on and off the field. He demonstrates leadership, selflessness and the willingness to give back to the community, all qualities of what the WBA represents. He should be very proud of his accomplishments but I think they are only the beginning. He definitely has a bright future ahead of him” added WBA director Christie Buono.

Vancouver Island Raiders Coach of the Year Matt Blokker added; “Andrew Harris is competitive and he is a leader.  Leaders like Andrew hold themselves accountable at all times and that is what makes them great.  Andrew Harris is simply the best football player I have ever coached.”

During the 2009 season, Harris gained 1,476 yards on 102 carries for an average of 14.5 yards a carry for the Vancouver Island Raiders as he accumulated 24 touchdowns.  The Raiders are currently undefeated as they head into the Canadian Bowl which will be held in Nanaimo at Caledonia Fields on Saturday, November 14th.  Kickooff for the game is set for 1:00 pm.  Harris will be in the hunt for more CJFL records as he is currently the record holder for the most touchdowns in a career.  He is chasing former CJFL running back and WBA 2007 winner Tristan Jones in several other categories.

Born in 1987, Harris stands 5’11” and weighs in at 195 lbs.  He is currently a member of the Lions practice roster as a non-import running back as well as a member of the Vancouver Island Raiders.  The WBA presentation will be made on November 6th at the BC Lions’ home game versus Edmonton.  Eskimo special teams and backup fullback Chris Ciezki, who is the 2004 WBA winner, will be on the field Friday evening as well.

About the Wally Buono Award:

The Wally Buono Award was established in 2003 and is funded annually by The Saint Bernard Pass Charitable Foundation for the purpose of recognizing Canada’s top junior football player. The award is a national award as it is the only award that recognizes all junior football players throughout Canada. Recipients must prove their athletic and leadership ability on the field as well as a high level of leadership within their community. Previous recipients have included 2003 winner Al Giacalone who is a former running back for Canada’s St. Mary’s University and a former Calgary Colt. In 2004, Chris Ciezki, running back for the University of British Columbia and the Edmonton Huskies, was awarded the Wally Buono Award. Jeff Halvorson of the Okanagan Sun Junior Football Club was the third winner of the Wally Buono Award in 2005. Known as the fastest man in junior football, Jeff died suddenly on the practice field on the first of September 2004, just before the end of a practice session. Halvorson was well on his way to breaking several Canadian national junior football rushing records. 2006 saw University of Manitoba pivot and former Winnipeg Rifle, Nate Friesen, take the award.  Edmonton Wildcat record holder, Tristan Jones was honored as the 2007 Wally Buono Award winner as the finest junior football player in all of Canada.  Cassidy Doneff followed Jones as the WBA winner in 2008.