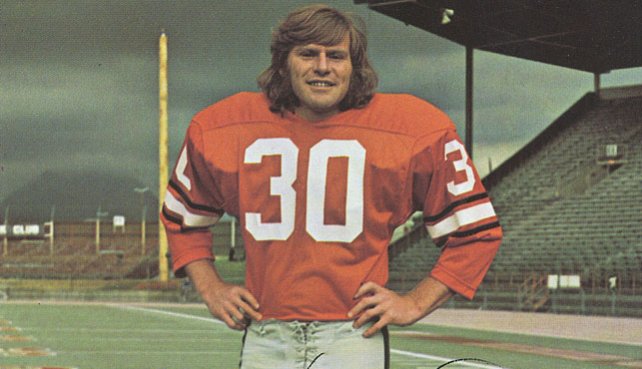 This season, the CFL will pay tribute to teams from the 1970s era by looking back at some of the league’s outstanding players from that decade.

This week, as the Lions prepare to take on the Stampeders in Saturday’s Retro tilt, CFL.ca profiles former Lions great Jim Young.

Jim Young, “Dirty Thirty” as he came to be known, wore the BC Lions colours for 13 seasons (1967-79) and remains one of the most popular players in team history.

“It was after a game in Hamilton in 1967 and a friend of my dad’s came up to me afterwards,” Young says of his fabled nickname. “He said, ‘Man, you Lions sure played dirty tonight.’ It gave me an idea and I approached Jim Taylor, a writer at the Vancouver Sun on tying it in with my number 30. He did a column on it and we ended up doing a book called Dirty Thirty. It was really just something we created for marketing purposes. It was really just an idea.”

While the nickname may not have been an accurate description of Young’s play on the field, he was a hard-nosed, tough receiver who attended Queen’s University after graduating from Westdale Secondary School in Hamilton. He was the number one pick in the 1965 Canadian College Draft by the Toronto Argonauts.

The Minnesota Vikings had also shown interest in the talented receiver so Young opted to try his luck south of the border. He signed as a free agent and spent two seasons (1965-66) with the Vikings prior to returning to Canada after the 1966 season.

In 1967, Young was part of a multi-player three-team swap that saw Bill Symons and Dick Fouts go to Toronto from BC, Joe Kapp go to Minnesota and Young come to the BC Lions. Vancouver would be Young’s football home for the next thirteen seasons.

The Hamilton native was one of the all-time great Lion receivers and retired with 522 receptions for 9,248 yards and 65 touchdowns. Young played in 197 games for BC and led the team in receiving his first nine seasons (1967-75). In 1972, he set a club record with 1,362 receiving yards, a record that was broken by Tyron Gray in 1981. His career mark for most career yards receiving stood for nearly 30 years until it was surpassed by Geroy Simon in 2008.

Young, who was a Western all-star in ’69 and ’72, was named the league’s Most Outstanding Canadian in both 1970 and 1972. “That was nice that it happened,” he says. “In fact, I probably had a better year in’75 than either of those years but the recognition never hurts. But it’s not the same as winning the Grey Cup.”

Young recalls playing against a number of excellent defensive players. “Gene Mack, I had some battles with him. Dick Dupuis, Joe Porier, Dave Gasser, Doug Strong, Joe Forzani. He was very tough,” he says. “Wally Buono as well. And Garney Henley. They (Hamilton) put Henley on me wherever I lined up. He was an excellent defensive back. And Kep. In ’76 Dan Kepley got me underneath and broke two of my ribs.”

The closest Young ever got to a Grey Cup game was the Western Final in 1977. “We lost that game as soon as we got off the plane in Edmonton,” he says with a laugh. “It was about -40 degrees and the wind was howling. We had guys who had never even seen snow before. I think they beat us 38-1.” (Editor’s note: good memory Jim, the score was 38-1 for the Eskimos).

“You set your sites on the Grey Cup every year and when you don’t achieve that it is very difficult. That is one of the reasons I came back to help coach in 1989.”

Young played with some all-time Lion greats who were nearing the end of their careers. “Guys like Norm Fieldgate, Tom Brown and Lonnie Dennis,” he says. “And later Johnny Musso and Ray Nettles. There were so many I don’t want to miss anybody.”

“We had a lot of fun in BC,” he adds. “Playing at old Empire Stadium. It was a little different. We spent a lot of time in the 70’s trying to find a good quarterback. Pete Liske and Rick Cassata were both there late in their careers but it wasn’t until we got Jerry Tagge and Joe Paopao that we started to get some success.”

Young’s #30 is one of only eight honoured by the Lions in the ring at BC Place.

He was inducted in to the CFL Hall of Fame in 1991 and the Canadian Sports Hall of Fame in 2002. Fellow inductees that year were Ted Lindsay, Tim Horton and Carl Brewer. “That was a thrill,” Young says. “Those guys were heroes of mine and I have always been a Leaf fan. First the Canucks, than the Leafs.”

Now 67, Young is retired and lives in Coquitlam, BC. He has coached at both Simon Fraser University (1967-68 and 1970 and 1983-84) and was in management with the Lions from 1989-92. He worked in the hotel industry for many years following his retirement and spends his time now with his grandchildren, helping with his wife’s business and playing golf at various fundraisers. “I’m not a very good golfer,” he says, “so I pretty much stick to fundraising tournaments.”

Young returns to Hamilton periodically to see his two sisters but remains a passionate supporter of the Lions and has had season tickets for years.

“I grew up loving the CFL; I love it to this day,” Dirty Thirty says.” I was very fortunate to play when I did. It was wonderful.”