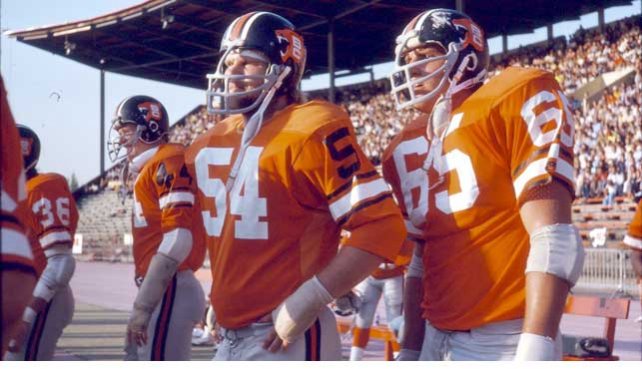 The Leos made the playoffs four times in the decade. Three times they finished third and in 1977 finished second – their best overall result – with a record of 10-6.

In 1970, CFL legend Jackie Parker finished his two-season stint as head coach but could do no better than guide the Lions to a 6-10 record and a fourth place finish in the West. Eagle Keys took over in 1971 until he was replaced by Cal Murphy after going 1-5 to start the 1975 season. Murphy (1975-76) and Vic Rapp (1977-82) were in charge for the balance of the decade.

The Lions missed the playoffs the first three years, finally finishing third in 1973. They lost to Saskatchewan 33-13 in the West Semi-Final. The next year was almost a mirror image as the Leos again finished third but lost to the green ‘Riders 24-14.

BC wouldn’t return to the playoffs until 1977 when the Lions fielded their best team of the decade and finished second in the west with a record of 10-6. Quarterback Jerry Tagge was named the Most Valuable Player in the Western Conference as he threw for 2,787 yards. Head coach Vic Rapp, in his first of six seasons at the helm, took home Coach of the Year honours. Centre Al Wilson was named Most Outstanding Offensive Lineman. Wide receiver Leon Bright was Rookie of the Year and had 45 receptions for 816 yards and seven touchdowns. It was the second year in a row that the Lions took home the hardware for best first-year player. Former UCLA All-American quarterback/safety John Sciarra (1976-77) won the award in 1976. Mike Strickland, coming off a 1,119 yard rushing season in 1976, again led the team with 751. In total, the Lions placed ten players on the Western Conference all-star team.

In the West Semi-Final the Lions got by Winnipeg in a 33-32 thriller. Against the Edmonton Eskimos, a team fast becoming another dynasty, the Leos were overwhelmed 38-1 in the final.

Centre Al Wilson, from Duncan, BC, anchored the Lions offensive line for 15 seasons, from 1972-86. He made seven straight CFL all-star teams (1975-81) and played in 233 games for the Leos. He was the West’s Most Outstanding Offensive Lineman on three occasions and won the Schenley Award in 1977. His sweater #52 joins Young’s at BC Place. Wilson was elected to the CFL Hall of Fame in 1997.

In 1976, kicker/punter Lui Passaglia began his record-breaking 25 year career that would land him in the CFL Hall of Fame (2004). Passaglia has played the most games of any player in CFL history with 408 and has scored the most points in history with 3,991. The Simon Fraser graduate was a nine-time Western All-Star.

The Lions had their share of heroes on the defensive side of the ball in the 70’s.

Hall of Famer Bill Baker (1994) was a CFL all-star defensive end four times over his 11 year CFL career, including two of his three years with the Lions (1975-76). He won the Most Outstanding Defensive Player Award in 1976.

Defensive back Rocky Long was an outstanding kickoff and punt returner for BC and led the Lions in both categories three straight years (1976-78). He was a Western All-Star in 1977.

The 1970’s were a challenging decade for the BC Lions. Better times lay ahead as the 80’s beckoned.