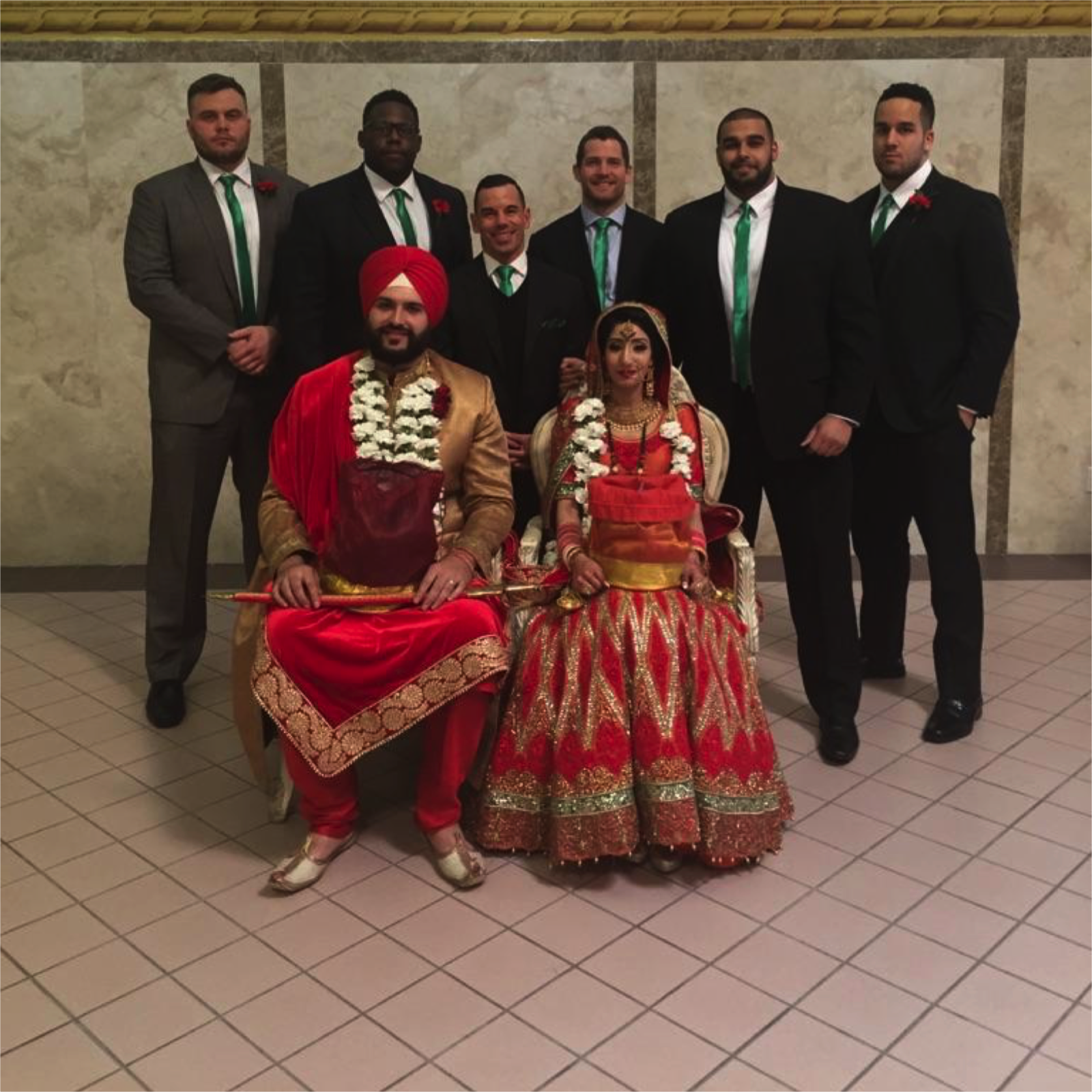 Cody Husband is living up to his name: off the field, just as much as on it. While the offensive guard has been training hard for his second full season in the den, he took a short break over the Easter long weekend and married long-time girlfriend Rajpreet Dhillon.

“It was a great event,” Husband says proudly. “It lasted from Tuesday to Saturday. I got to see first hand how the whole Sikh tradition goes and how the party can be. I had been part of some, but this was a whole new experience for me.”

Husband gets his Sikh heritage from his mother Harprit. He and Dhillon represent two of the three current CFL players who come from Sikh families. The other is Winnipeg Blue Bombers O-Lineman and Terry Fox Secondary grad Sukh Chung.

The two Lions are well aware of the impact playing pro football has on members of the Sikh community.

“It makes you proud because there are not a lot of us that are making pro,” Husband says. “There are a bunch of Sikhs that are starting to make leaps and bounds. We have had three or four pro football players so far, we’re starting to get soccer and basketball players as well.”

“It’s a huge honour. There are not too many of us that have made it this far,” Dhillon says.

Dhillon also believes he is doing his part to help pave the way for others to make it in pro football and makes a point to be available for those seeking advice.

“I am very proud to represent our community, especially being in BC where I was born and raised. It’s not just the Sikh community but all minorities and people in general who want a chance to play,” the former Surrey Ram says.

“A lot of East Indian kids who play football message me on Facebook just to get a little advice and tips. It makes me feel honoured that there are people who look up to myself and Cody.”

Dhillon played his high school football at Sands Secondary in North Delta before graduating from UBC in 2013. A second round pick of the Toronto Argonauts in 2014, Dhillon spent five weeks on the Lions practice roster last season, before agreeing to a new contract in December.

The story of Husband’s journey back home should serve as an inspiration to young football players everywhere. He started playing football in grade ten after realizing his first love of basketball was not meant to be.

After graduating from the revitalized New Westminster Hyacks program, Husband played five years for UBC then landed with the Hamilton Tiger-Cats as a non-drafted free agent. Teammates in Steel Town included former Lions tackle Jason Jimenez, whom Husband says he watched closely as a youngster.

As for the 2016 Lions, Husband feels there is a special chemistry developing with the guys he will be lining up next to.

“We’re going to have a strong O-Line. Other years I have been on teams where we weren’t exactly sure what was going to happen, but we have a really good group this year. Having guys in together working out makes it a lot more enjoyable than going to the gym yourself. We can actually joke around and have fun.”

Dhillon echoes Husband’s optimism on the coming season and is relishing the opportunity to work under veteran offensive line coach Dan Dorazio. Dhillon first met him prior to being drafted two years ago and knew right away it was someone he would love to play for.

“The type of work he does is the stuff I need to make myself a better player. I feel it’s a great fit with him and something that I have been looking forward to for a long time,” Dhillon says.

With good coaching to go along with the mixture of veterans and youngsters, Husband agrees it could add up to the perfect formula for success in 2016.

“When other teams are playing us, their defensive line isn’t going to look forward to it. That’s our idea.”