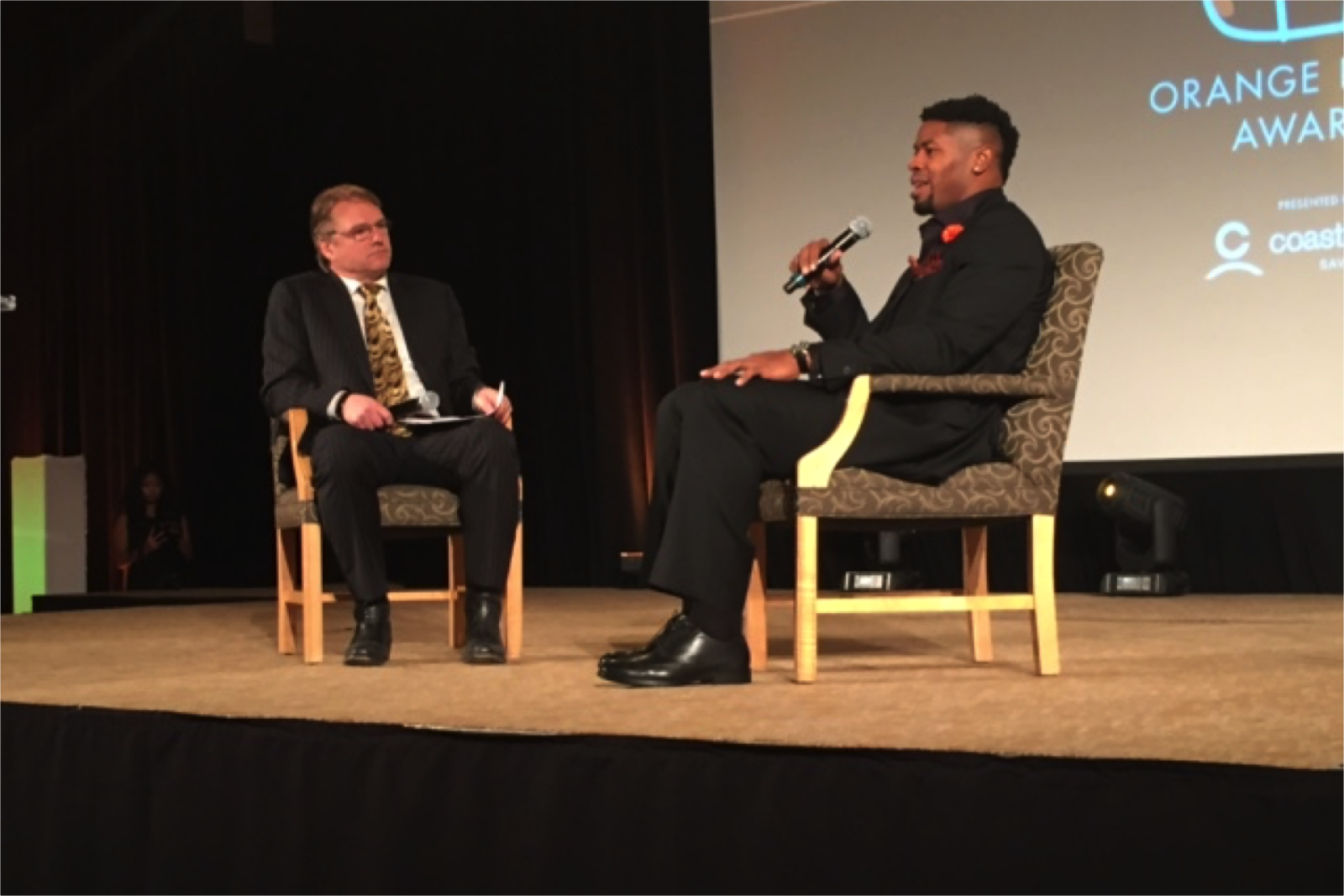 For a 13th year, the Orange Helmet Awards ended with the guest of honour walking off the stage to standing ovation.

Former Lions defensive end Cam Wake returned to the city his pro football career first took off in 2007. The current Miami Dolphins star has not forgotten how it all started and BCLions.com had the chance to sit down with him while he signed merchandise to be auctioned off.

“It’s truly an honour to be back. Looking at the Lions logo, it reminds me these guys helped pave my way,” the 2007 CFL Most Outstanding Rookie says. “I had been south of the border with all of the greatest football minds but nobody really could see who Cam Wake was. The guys in BC gave me an opportunity.”

During a stage Q & A with TSN’s Glen Suitor, Wake echoed how much the Lions organization truly means to him. “For me, the BC Lions represented the first time I had a football family,” Wake said.

That is a pretty neat statement for a guy who enjoyed four productive years at Penn State University before embarking on his pro journey.

Following his release by the New York Giants prior to the 2005 NFL season, his dominant two-year stint in BC almost didn’t happen. All thanks to a mix up on location for the free agent camp he was to attend.

“I made the drive to Howard University in DC,” Wake recalls. “I got there early, was feeling good, but after a few minutes I noticed there wasn’t any other football guys there, just a couple old ladies power walking around the track.”

It didn’t take long to put two and two together: Wake had gone to the wrong place. It was in fact at Hampton University, a three-hour drive away, where Lions scouts were waiting.

“At the time it was not funny at all,” Wake said with a nervous smile. “I kind of thought that was my lone shot and it went down the toilet.”

Club policy was simple: no show to a workout and no deal. It appeared Wake’s CFL dream was over before it began.

“Bob O’Billovich really went to bat for him,” recalls Neil McEvoy. “A lot of guys we sign are contingent on if they show up for the workout. Wally suggested we move on, but Bob made sure it happened.”

McEvoy wound up getting Wake signed and in hindsight the entire regime is thankful they didn’t follow their rule book. “You could see it on the first day of camp just how elite he was,” McEvoy said. “And then the first regular season game in Toronto he was outstanding. A true pass rush specialist.”

“For the debut, I was probably more nervous than I had been in my entire life,” Wake recalls. “It had been almost two years since I experienced any live game action so the butterflies were there.”

If nerves were indeed present, they didn’t show. He had 7 tackles and 3 QB sacks in a 24-22 victory over the Argos. The Lions recorded a 14-3-1 record, the best in franchise history but would fall to Saskatchewan in the Western Final.

In his two years up north, Wake recorded 39 sacks. Individual honours included CFL Most Outstanding Rookie in 2007, Most Outstanding Defensive Player in 2007 and 2008, along with Western Division All-Star nods. It was only a matter of time before the NFL came calling. After fielding offers from St. Louis, New Orleans, Buffalo and Minnesota, Wake joined the Miami Dolphins.

“I’ll be honest, when I first came up here it wasn’t on my mind that I had to get back down south and make it big right away. The goal was to just play the game I love and be the best that I can be no matter where it was.”

Today, Wake is a four-time Pro Bowl selection. He was also named Dolphins team MVP in 2012. Last season, Miami was 3-3 when Wake tore his achillies tendon in a Thursday night loss at New England. The injury played a big part in their second half struggles.

“Watching my team play on TV while there was nothing I can do to help was the toughest thing of my career,” Wake said. “I started jogging two weeks ago and it’s great to be fully training for this season.”

You can also bet it allowed him to reflect more on his first football family some 4,500 kilometres away.

For an inside look at the 2016 Orange Helmet Awards, click here.