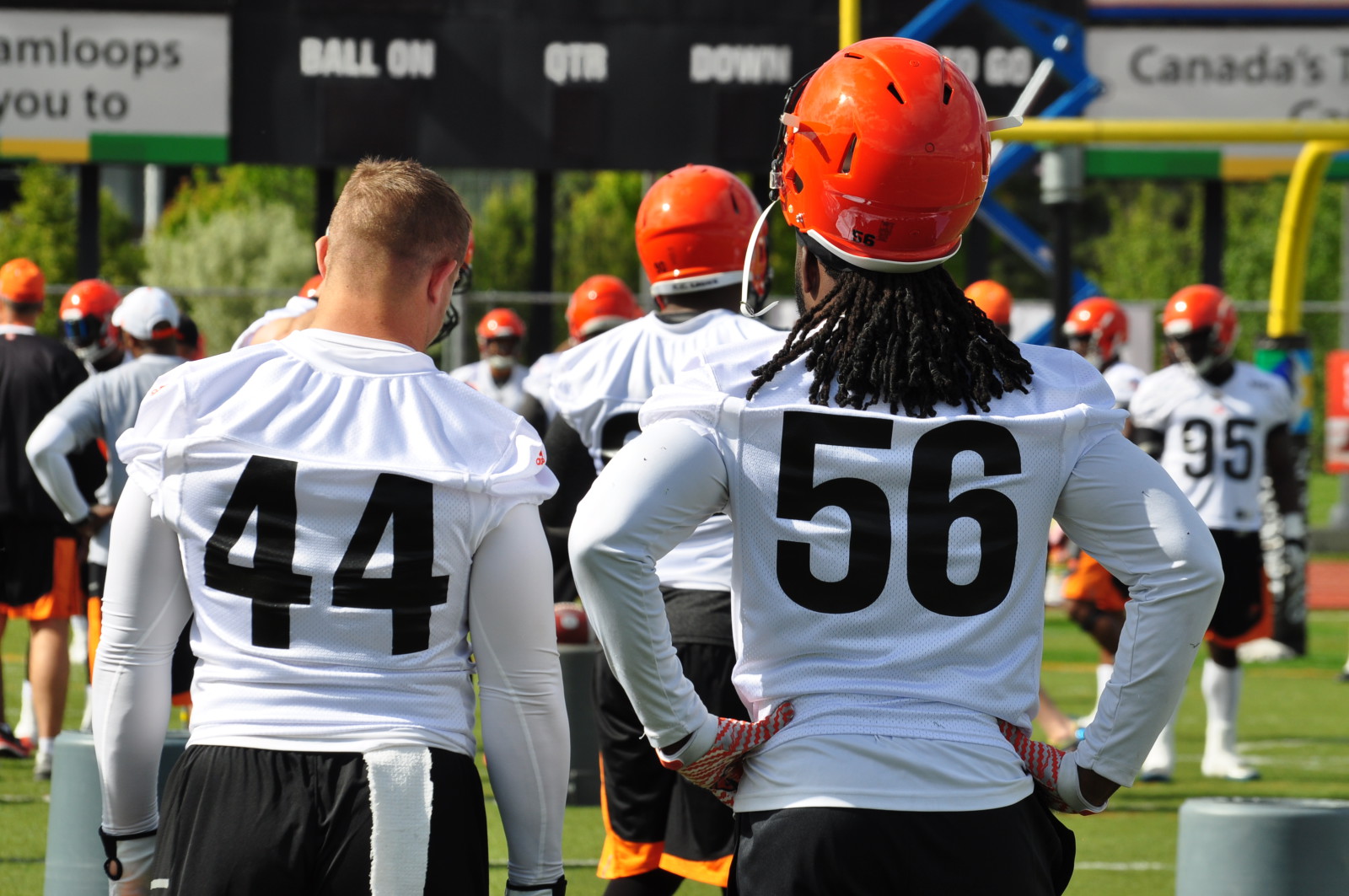 It’s just like old times in Kamloops with “Team 100” flying around and making plays. Adam Bighill and Solomon Elimimian, arguably the best linebacker duo the CFL will see for a long time, have some unfinished business in 2016. Elimimian reported to camp in excellent shape following his recovery from last season’s torn achillies tendon. Back in April, he told BCLions.com wasn’t using the word “rehab” in preparation for a seventh season in the den. Elimimian also made sure he told Bighill how excited he was when camp opened.

“I told him when we first put the pads on how much I appreciate him and what he did last year,” Elimimian said. “It’s going to be physical football and I feel we are going to dominate some teams.”

In the first few days of drills, you can tell Bighill has also benefited from having Solly alongside him. The further you go down the depth chart, the tougher choices there will be before trimming the roster down to 46 players on June 18th.

Bo Lokombo had an increased workload in 2015, making 26 defensive tackles, and looks to be fitting in nicely after attending off-season OTA’s in Surrey and mini-camp in Kamloops. The Abbotsford native and 2013 third round draft pick has the feel of a future starter down the road. Lokombo’s upside and non-import status paved the way for Alex Hoffman-Ellis to sign in Hamilton.

Adrian Clarke is back for a second CFL season. Along with backing up Elimimian, the Bishop’s alum will be counted on for his workload on special teams, where he recorded eight tackles as a rookie.

Of course you can’t talk about linebackers who excel on special teams without mentioning the “wizard” Jason Aragki, who is eight special teams tackles away from tying former Winnipeg Blue Bomber Wade Miller for the CFL all-time record. Aragki has also been productive at camp when lining up at outside linebacker in defensive packages. In 2015, Aragki tied his career high with six defensive tackles, all of which came in the regular season finale.

Dyshawn Davis was one of the more impressive defensive players at last week’s mini-camp and linebackers coach Chris Tormey was impressed by his athleticism and ability to fit in. Victor Aiyewa was a late arrival due to passport issues and has had to pick things up on the fly, but having a good group of mentors to learn from has helped speed up the process.

“They’re all doing a great job,” said Tormey. “We’re throwing a lot at them and they are picking it up well. The young guys are very focussed on learning the scheme.”