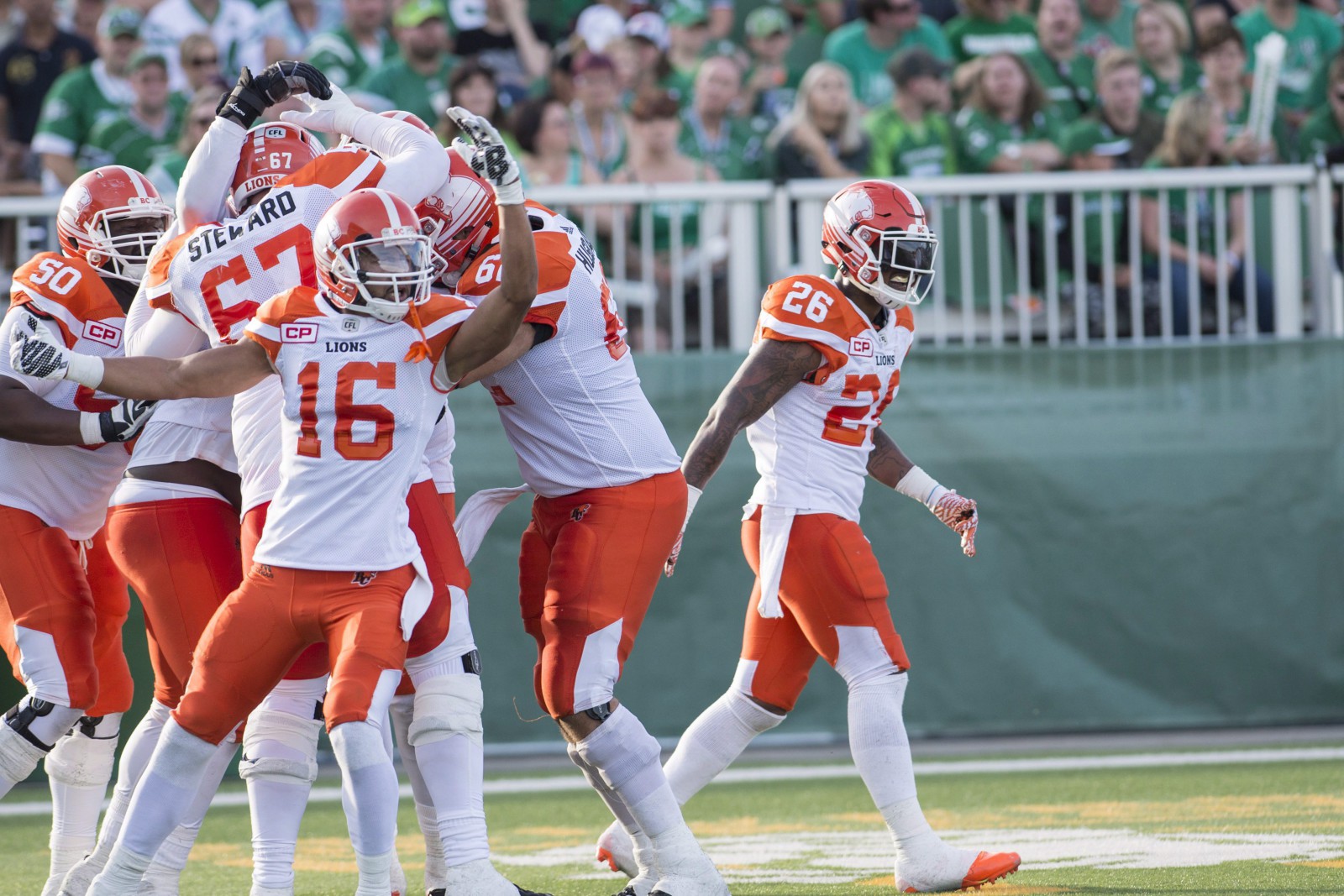 The B.C. Lions celebrate a touchdown catch by tackle Jovan Olafioye (#63) against the Saskatchewan Roughriders during second half CFL action in Regina on Saturday, July 16th, 2016. THE CANADIAN PRESS/Rick Elvin

It may be cliché, but it’s also worth repeating: If you want to win a championship, you must pay the price and overcome every hurdle that stands in your way.

Look no further than the BC Lions recent Grey Cup history: In 2011, there was the 0-5 start. You kept hearing whispers of “we’re close,” but it was hard to believe a turnaround was possible until they actually did it. The 2006 squad, as dominant as it was, actually started 2-3 before rattling off seven straight victories and running away with the West Division. In 2000, the situation seemed so bleak that head coach Greg Mohns bolted after seven games for a position in the XFL. They would follow that up by becoming the first sub .500 regular season team to go on and hoist Earl Grey’s mug. And then of course there is the classic Disney-style underdog story of 1994: A third place finish, followed by kicking down the door in Edmonton and heavily favoured Calgary, before returning home to take down the equally superior Baltimore CFLers on Lui Passaglia’s field goal as time expired.

The 2016 story is far from being written, but if the first place Lions want to be sipping champagne on November 30th they will have overcome a different kind of adversity: Season-ending injuries to Nick Moore and TJ Lee. Moore tore his ACL on, of all things, a routine touchdown celebration. Lee’s ruptured Achilles tendon took place in the game’s dying minutes when the result was no longer in doubt. That’s one of football’s sad realities, the fact certain things can happen at any time. Now it’s time to make way for another cliché: Next Man Up. Geraldo Boldewjin will start in Moore’s place for Friday’s first-place showdown in Calgary. The Amsterdam-born receiver is anxious to prove his worth after going down with a hamstring injury and stomach virus in training camp, ailments that kept him out of both pre-season contests. The Boise State product is excited for his 2016 debut.

“That’s the most exciting part about it, just being able to get on the field and show everybody what I can do out there. I’m very excited.” With Jonathon Jennings doing a nice job of  picking and choosing his receiving targets through four games, that certainly has to add to Boldewjin’s motivation to perform well. “Watching the games from home,  it’s been fun watching those guys make plays. Now I finally get a piece of that too. I can’t wait to just be out there and celebrate with my teammates in the end zone.”

Boldewijn’s lone regular season experience came against these same Stampeders in the regular season finale of 2015. He made an impression by hauling a 50-yard dart from Travis Lulay, the club’s third-longest completion all season. Boldewjin hopes the Stampeders’ players and coaches took notice. “I’m still trying to treat it as any other game,” Boldewijn added. “Those guys are good, but we just have to prepare for it and take care of busines

“He proved last year, he could make plays,” added Wally Buono. “His wingspan is such that if you put the ball around him, he’s going to go up and get it. He’s been working for the last couple of weeks, he has a good sense of what’s going on and I know the quarterbacks are comfortable with him.”

The task of filling Lee’s shoes is now up to Steven Clarke who proved his versatility in 2015 when he was tasked with taking over at safety after Ryan Phillips tweaked a hamstring in last season’s opener. Clarke impressed the coaching staff enough to earn a spot at corner when Phillips recovered. Although the resume is there, the third-year Lion is fully aware that it’s in the rear view mirror “I’m just excited and ready to get back out there and make plays,” Clarke said. “It’s unfortunate the opportunity came this way because TJ is one of our main guys, but now I have to step up, make sure that void is actually filled and make sure that I’m not the weak link in the group.”

“Stephen is a proven DB and even though the position is new for him I know he’s going to be up to speed and he and Ronnie ( Yell) will work well together,” Buono said. “I know he wants to play and I know he’ll bring something to the table.”

The consensus from early on in camp was the fact this Lions young secondary was the fastest and deepest unit they’ve had in quite some time. A prime example was the fact Clarke’s spot at the nickel was won by rookie Loucheiz Purifoy. Although internal competition is just another fact of football life, this group supports one another and it’s clear how much fun they have both on and off the field. “We’re all close friends and we all hang out outside of football,” Clarke added. “When you have that kind of connection on the field, it just seems to click.”

These men are playing for one another. That much is evident through four games.

On Monday, the club signed DB Chandler Fenner to a practice roster spot. The former Seattle Seahawk and New York Giant was originally signed by the club in February and released at the conclusion of pre-season. In addition, DB Kache Palacio and RB JC Coleman were released from the practice roster.