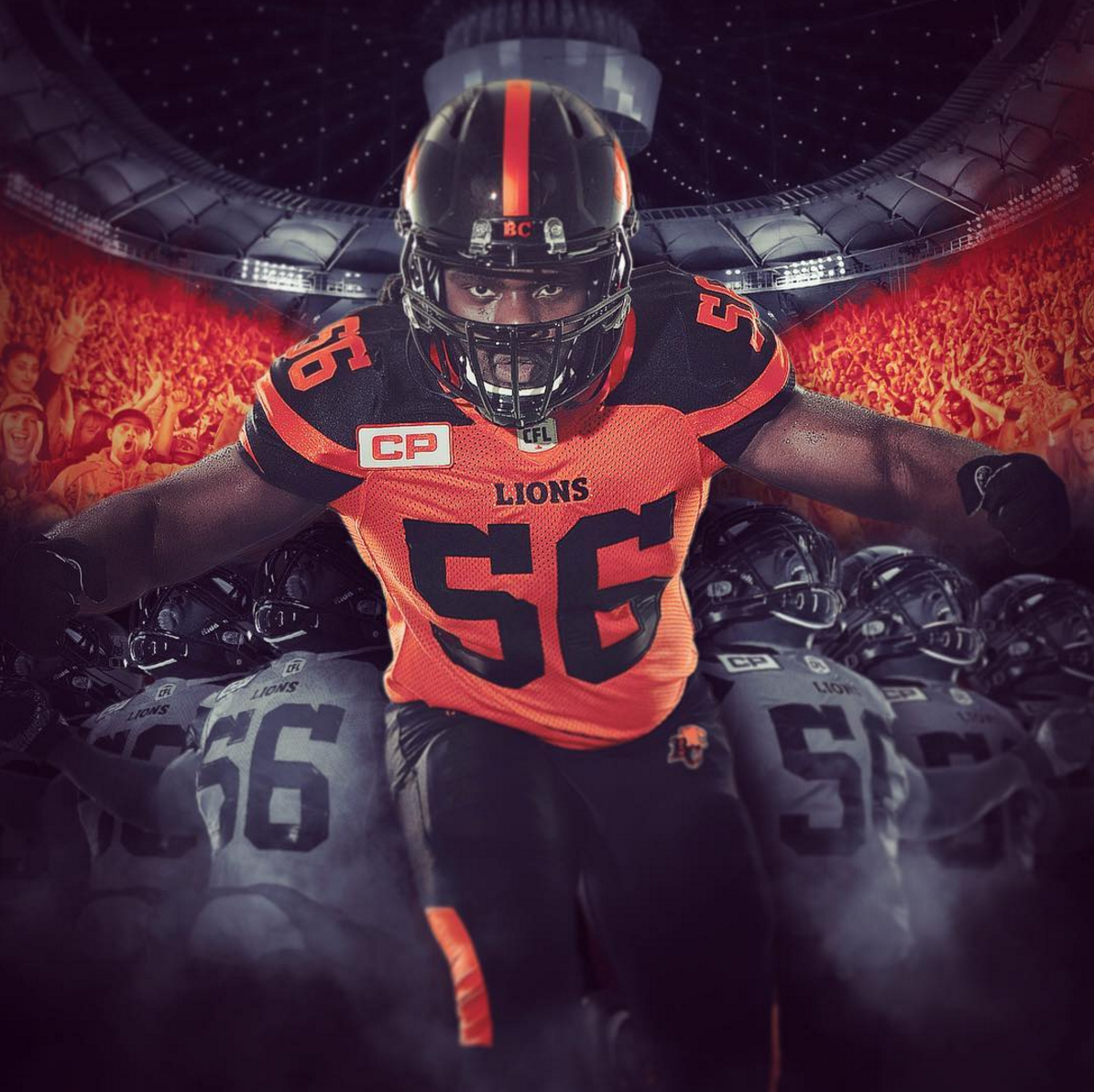 He was bleary-eyed and admitted he had about “six hours of sleep in the last five nights,” but that didn’t stop Solomon Elimimian from enjoying his early Christmas present at the Surrey training facility on Wednesday morning.

The BC Lions Football Club  wasted little time taking care of its biggest offseason priority as the linebacker has officially put pen to paper on a two-year contract with the team through 2018. Elimimian, the CFL’s Most Outstanding Defensive Player for 2016, was set to become a free agent in February. 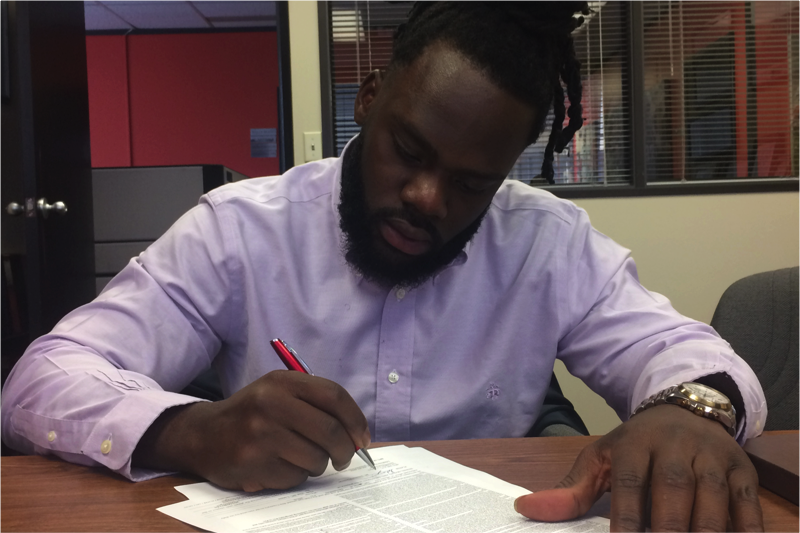 This time last week, number 56 was visiting his father in Nigeria before flying home to Los Angeles where he was slated to spend the entire Christmas break. The development in his contract negotiations altered his travel schedule and contributed to his lack of rest over the last few days.

“Solomon’s achievements as a football player are significant and this is a very big signing for our club,” said Wally Buono. “He is an important part of our defence, a leader in our dressing room and I know how important it is for our fans to have Solomon back with us.”

The only player in the history of the CFL to win three different major player awards and its only exclusively defensive player to earn a Most Outstanding Player Award as he did in 2014, Elimimian’s resume already reads like a likely hall of fame candidate.

A three-time CFL All-Star and a four-time West Division selection, Elimimian is on the cusp of franchise history heading into next season. His 575 career tackles put him just 12 defensive stops behind Dante Marsh’s all-time team mark of 587 while his combined total of 605 stops (including special teams tackles) places him just behind Marsh’s 609.

“BC is the only place I want to be and I’m elated to be signing back with the Lions. We have all the ingredients of a championship team and I can’t wait to get back on the field and get to work in 2017.” 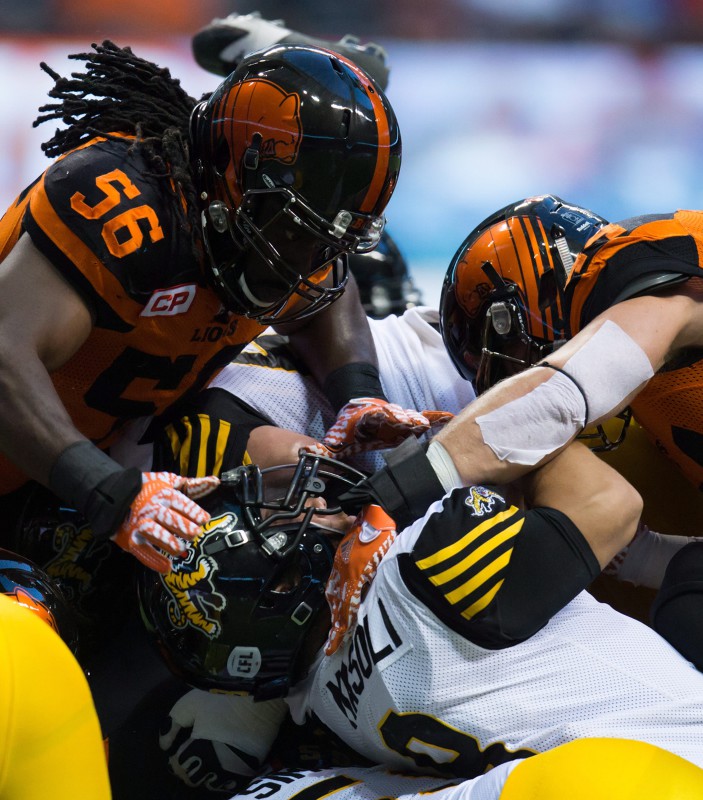 Elimimian’s stellar bounce back season included an excellent outing in Toronto on August 31st where he had 14 defensive stops to break Marsh’s single-game franchise record. He also recorded a key second half interception to snuff out an Argonauts drive. The Lions prevailed 16-13 to improve their record to 7-3.

“These are things are built through relationships, but it’s also what the player wants, ” added Buono. “Solly sees himself as a BC Lion, wanted to be a BC Lion and we were able to sit down and get a deal done so that he’s content. He’s looking forward to 2017 and knowing Solly, he is going to work that much harder to make sure he is better. We want to give him credit for being a team guy.”

Elimimian first came to the Lions as a free agent signing in May of 2010 and made an immediate impact north of the border: his 77 defensive tackles and 11 sacks paved the way for a CFL Most Outstanding Rookie nod. He returned to the Leos following a brief NFL stops with the Minnesota Vikings and Cleveland Browns in 2012.

“Both sides came together. It was something I wanted to to, something they wanted to to, so it makes sense,” added Elimimian. “I know the situation here and I am happy with it. We have a great group of guys on this team.”

The fact this was done before Santa’s sled departs the North Pole speaks volumes: the winning culture was re-established in 2016 and the fact Elimimian wants to return and finish the job without even taking a look at the free agent market is a major win. From Buono’s perspective, he can now avoid distractions and uncertainty as the staff continues to get ready for 2017 training camp. The fact eight members of the coaching staff have committed to returning is another example of how people want to remain a part of what is being built.

The idea of testing the market would no doubt be appealing to anyone at the stage of Elimimian’s career, but you have to figure staying closest to his off-season home of Los Angeles played a big role in this decision as well. The linebacker has also become a big part of the Lions’ community initiatives and you could probably say that had something to do with the decision as well. As a wise man once said: “It isn’t just about money.”

With Adam Bighill currently exploring his NFL window until January 27th , we won’t officially start printing cards about the return of ‘Team 100′ just yet. However, should number 44 not find work down south the Lions’ defence should be as formidable as ever in 2017. These two players would love nothing more than to bring a seventh Grey Cup to this province and this past season proved they are more than capable of playing at a high level into their 30’s.

About that performance in Toronto: it may have been the single best performance by a defensive player in the CFL this past season. He played like a one-man wrecking crew and made sure the defence gave up nothing following a Ricky Ray-led touchdown drive to open the game.