Jonathon Jennings: Student of the Game 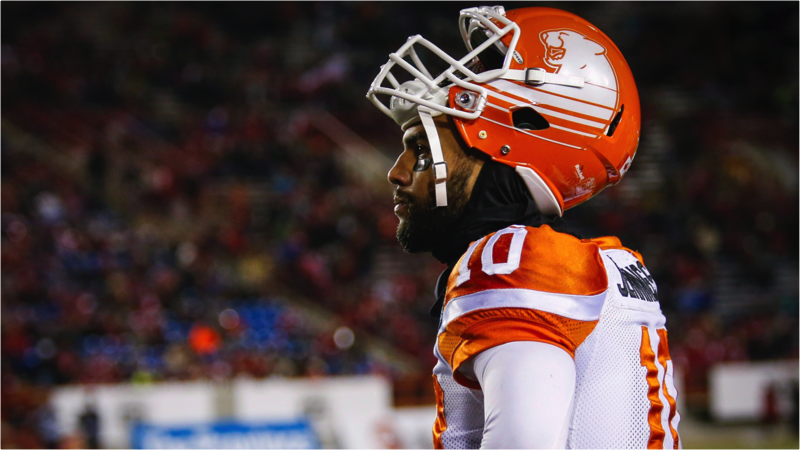 Jonathon Jennings: Student of the Game

Jonathon Jennings is not ashamed to admit it. He has watched the play about a hundred times. It is bookmarked under the favourites on his laptop. He can recite both the TV and radio play-by-play calls verbatim. In case you hadn’t figured it out, we’re talking about his thrilling nine-yard touchdown run that completed an almost improbable comeback against Winnipeg in last November’s Western Semi-Final. When we ask him to recite it yet one more time, one thing is clear: There was no concern about leaving Matt Nichols and company 66 seconds to kick a potential game-winning field goal. It was all about hitting pay dirt.

“At the goal line I said to myself ‘I have to find a way to run this guy over and do whatever I can to get in the end zone’. It was one of the most thrilling plays of my career,” recalls Jennings fondly.

It’s true. Not even three cracks from your opponent’s one-yard line is a slam-dunk. Just ask Russell Wilson and the Seattle Seahawks in Super Bowl XLIX two years ago. If you can’t trust your defence to come up big, you shouldn’t be competing for championships in the first place.

Jennings’ eyes lit up as he continued to discuss the play in great detail.

“It really felt like it was slow motion”, remembers Jennings. “The play didn’t go as we expected, but that’s football. I tried to wait on another read on the left side of the field. It wasn’t there. So I kind of hopped around the pocket, felt a guy diving at my feet and I was shocked he didn’t find a way to grab me so I kind of bounced out of it, bounced away from the pocket and started out to the right.

I saw Taylor Loffler coming and knew at this point it was all or nothing. These are the kind of moments that you talk about: maybe earlier in the season you play it safe or try and throw the ball away, but at this moment I had to make a play.” 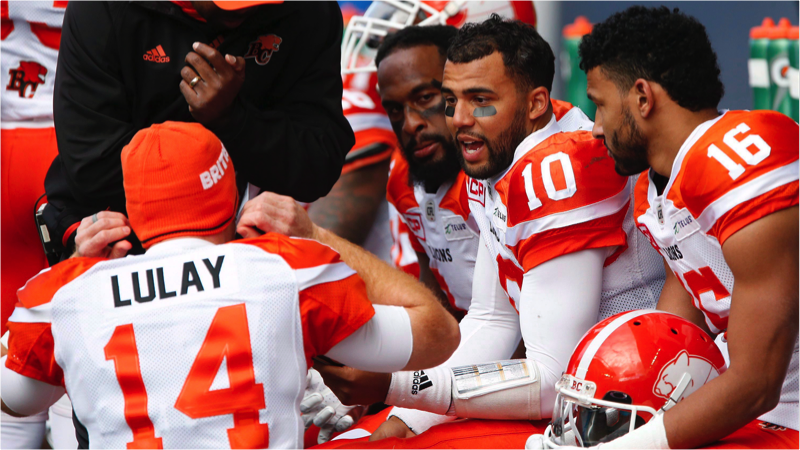 Maybe in week 12 when the stakes aren’t quite as high, he goes out of bounds. In November, the mindset is different. The play that sent Jennings and company to Calgary for the Western Final was the exclamation point on the quarterback’s stellar second season in the pilot’s seat. Jennings admits he is happy to not be dealing with the same questions from last offseason.

There were whispers of is he ready? Was the six-game sample size enough to earn the starting job going into camp?

Shouldn’t Travis Lulay be given the chance to prove himself before the young kid gets the keys? You name it….

It is Jonathon’s team now, but that doesn’t mean he has stopped being a student of the game and taking the valuable guidance from Lulay and Khari Jones. The two quarterbacks spent a majority of this past week with their offensive co-ordinator, going over the good and bad from last season as well as kick-starting the preparations for 2017. For three self-confessed “football nerds,” the closed-door meetings and film sessions have been time well spent. 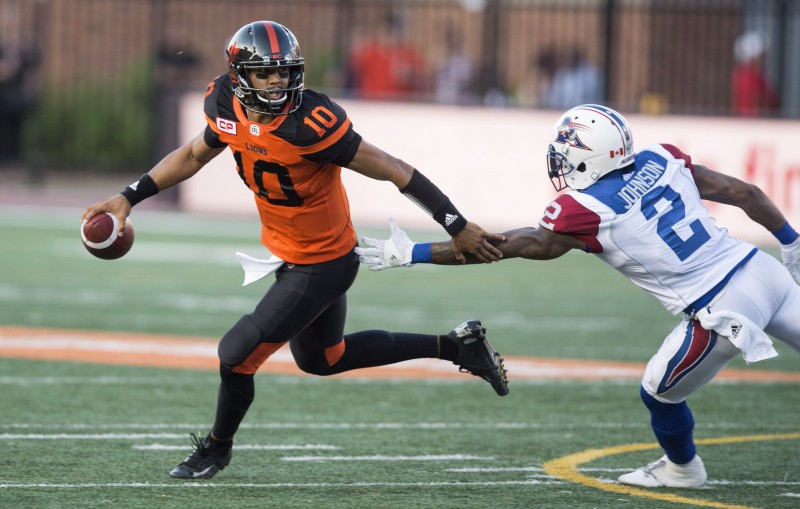 “You always need to take a step back from the game, analyze what you did in past seasons and understand what you can do to be a better football team,” says Jennings.

“There is no ceiling to how knowledgeable you can get. That comes with seeing guys like Travis, seeing a coach wanting to come in and continue to learn. Khari is a great example for me as well. They (the coaches) go to conferences; they talk to other coaches and are always trying to learn different ways to be better.”

The willingness to never stop learning has no doubt allowed Jennings to develop and make those key mid-play decisions like the playoff touchdown against Winnipeg; even as they break down before his eyes.

The regular season, which preceded that magical November afternoon, was quite remarkable. He had the third-highest passing total in team history and became just the fourth Lions pivot to eclipse the 5,000- yard mark- Doug Flutie, Dave Dickenson and Casey Printers is not bad company- so the fact Jennings feels he still has a ton to learn.

“It’s always good to have those two guys in a room and get a chance to go through some things and take account of last year after stepping away for awhile,” says Jones of the four- day session with Jennings and Lulay.

Jones of course spent three years in BC as an understudy to Damon Allen before getting his shot to start in Winnipeg. Being a student of the game and devoting his time to the film room and playbook played a big part in his longevity, so he no doubt appreciates Jennings’ dedication to his craft.

“That’s what you want from the quarterback position,” adds Jones. “It’s a position where you aren’t going to be perfect and you’re going to be judged constantly. Jon realizes that. He has a good head on his shoulders and he knows what he wants to accomplish as a football player. Hopefully I am a person who can help him get there.”

Will all of the offseason prep and not taking anything for granted lean to even bigger accomplishments in 2017? Jennings had a good chuckle when he was reminded that Lulay’s third season in orange ended with a Grey Cup win and CFL Most Outstanding Player honours.

Precedent set or not, taking that next step as a team is the only thing on Jennings’ mind at this point.

“Pressure is always on. I would be thrilled to have the opportunity to win a Grey Cup. That’s the ultimate goal. Season in, season out you are really trying to attack that goal and be the best you can be. Obviously if you play well you can help contribute to a great team.”

It is hard to tell who is more excited about the offensive weapons at their disposal: Jennings or Jones. Their receiving corps was already going to be among the most explosive and dynamic in the CFL, especially once Bryan Burnham put pen to paper after his tour of NFL tryouts. Then Chris Williams came along. You can only imagine the amount of play scribbling and schemes being drawn up during the quarterbacks’ school session with Jones this week. 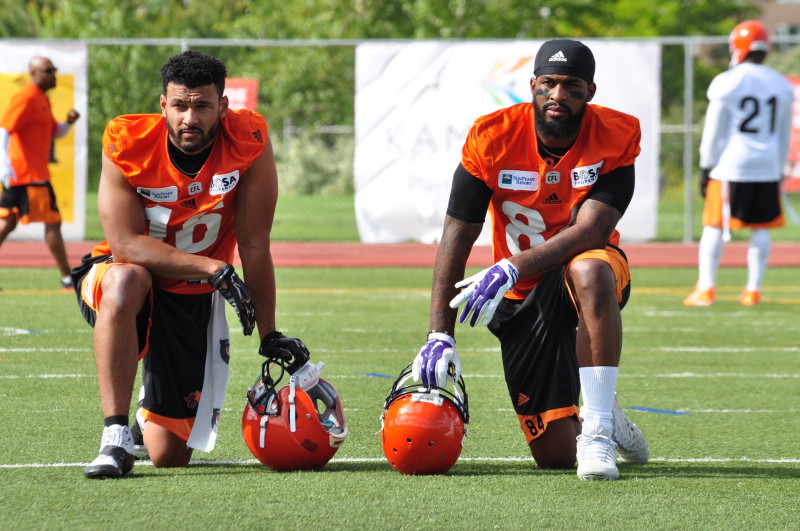 “Burnham became so good last year and he was one of the most exciting players in the league. You obviously have Manny killing it all the time. To have those guys back is going to be a huge foundation for us. And it always excited me to watch Chris last year. He was very electrifying, very exciting. It’s always fun to see a super fast guy out there doing that stuff.”

261 catches, 26 touchdowns and 4,204 yards: that’s what you get when you combine last year’s totals for the “big three” of Burnham, Arceneaux and Williams.

Along with dreaming about stats, working out and watching film this offseason, Jennings is also enjoying life as newlywed. He and long time girlfriend Abigail Minsch tied the knot on New Year’s Eve in front of family, friends and even a few teammates, Lulay included, in their hometown of Columbus, Ohio.

From there it was on to a well-deserved honeymoon in Maui. A football student at heart, the 25-year old even found some time to spend with Wally Buono who was in the midst of his annual January vacation on the island.

“Maui was awesome, says the third-year QB. ”It’s always nice to take a step back from the season and enjoy yourself. That was a great way to spend the honeymoon. We got to see Wally and went out for dinner with him, we also saw Mike Reilly. I tried surfing. We had some great food, you can’t beat the fish on the island.” 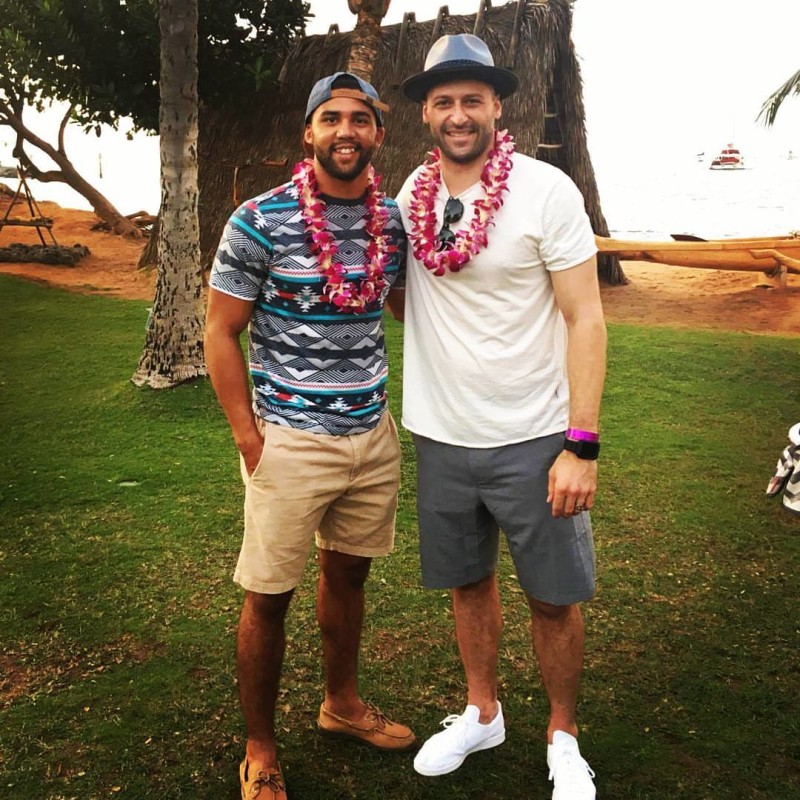 Jennings admits riding the waves was no picnic in the park, even for a spry, athletic pro athlete never willing to back down from a challenge.

“It was hard,” recalls Jennings. “Looking at pictures after the fact, it was kind of sad (laughs). It felt like we were on 20-foot waves but in the photos they were like little baby bumps. That’s probably it for me, but I can always say I surfed.”

Riding undpredictable waves and having your first and second reads fall through on a play. Those kind of come hand in hand. One thing we know about Jennings is he isn’t willing to give up on either. And that could result in many more winning scores to come. It should be a fun ride in 2017,especially with the student already hard at work.

Birth Certificate Just A Piece Of Paper For Lulay

The ageless redhead knew the question was coming, so he might as well have gotten it over with before training camp. Lulay had a good chuckle when it was brought up during a media conference he is in fact now the oldest player on the roster. This development comes after the departures of Ryan Phillips (signed with Montreal) and Tim O’Neill (retired).

“It’s really just a number on the roster,” says Lulay. “33 is not old in the quarterbacking world. If I didn’t think I could play at a high level, I 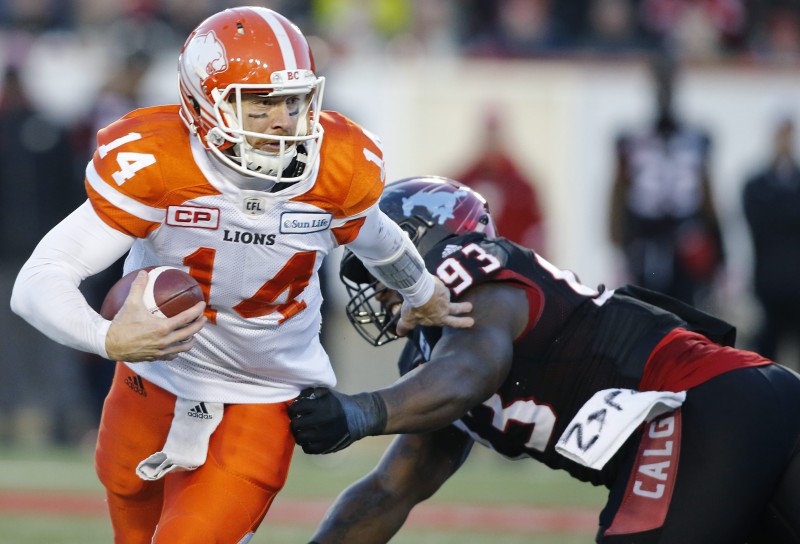 wouldn’t still be doing it. You have to prepare like you are playing the whole season. That’s the mindset.”

“That’s what we want from him. He’s not here just to be a mentor to Jonathon,” says Jones. “He still brings a lot to the table as a player. Last year was the first time in awhile he made it through injury free and had his body back. If something does happen to Jonathon, we still expect to win. That’s why Travis is here.”

Although Lulay realizes he won’t be playing every down, the situation here was just too good to leave. That’s the message he conveys when asked why he didn’t pursue a move to a team in search of a number one. His relationship with Jennings and other veterans was also a big deciding factor.

He has become one of my closest friends on the team. We spend more time with each other than we do with our wives during the season,” says Lulay of Jennings.

“This team really cares about each other. We have really good vibes, particularly on the offensive side of the ball. That starts with Khari.”

It is indeed a close family. Step one to building a winner.