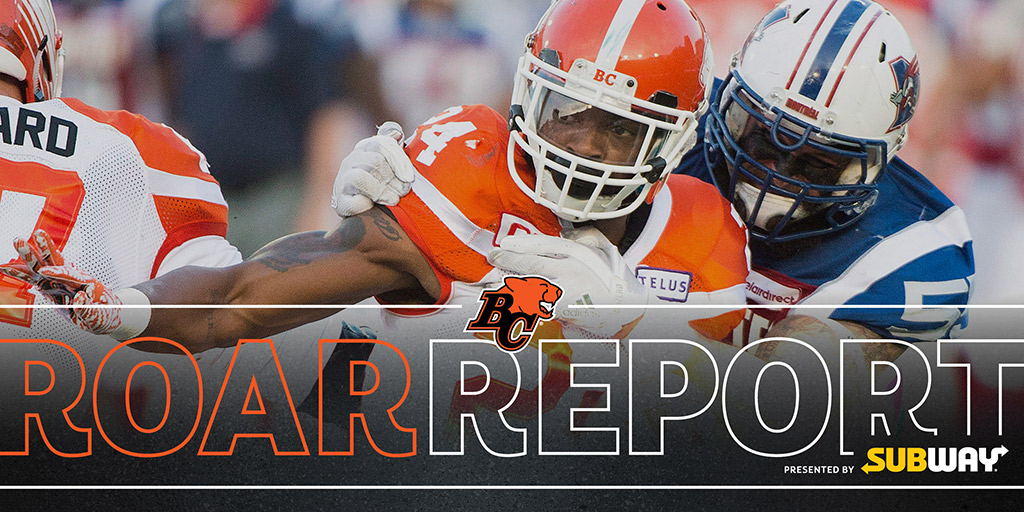 The road warriors did it again. And for a second straight week, they capitalized with a huge 4th quarter. Travis Lulay’s two-yard touchdown plunge with 2:43 left was the difference in a 23-16 win over the 1-2 Montreal Alouettes.

Your BC Lions are now 2-1 on the young season and now get set for a showdown in Hamilton on Saturday, July 15th.

“It felt very good to come into a hostile environment, get the W and just be ourselves,” said Johnson in a jacked up visitors locker room.

“We started off fast and didn’t have a hot 2nd or 3rd quarter, but we did what we had to do in the 4th to win that game.”

A fast start would be an understatement. Johnson’s first major of the night capped off an 11-play, 81-yard drive that chewed up over five minutes after the opening kickoff. The talk all week was the need to come out firing on all cylinders and they did just that.

“It felt really good to just go down there and score a touchdown,” added the running back.

“Now we just have to pay more attention to the details and have a good four quarters. We want to make the whole game look well, just not in the 1st or in the 4th.” 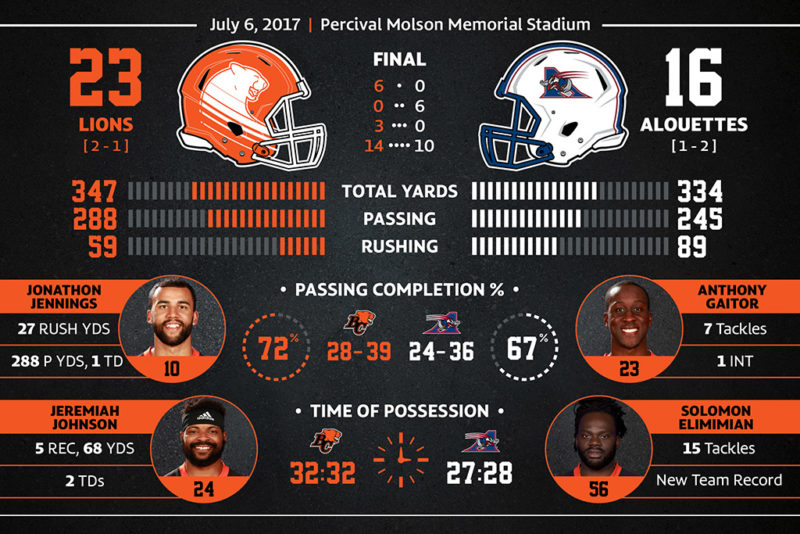 “Jeremiah is an insane player. He has insane skill and it’s tough to stop him,” said Jennings.

“He’s a great player, he does so much for us and I am excited to watch him every single week.”

Johnson’s score was the only points they managed before halftime and the Alouettes were able to draw even on a pair of Boris Bede field goals. Ty Long’s only field goal of the night was all the scoring in the 3rd quarter.A big potential turning point came with 8:12 to play and the Lions up 16-9: Tony Burnett intercepted a Darian Durant pass and took it 108 yards to the end zone, only to have it called back on a borderline illegal contact penalty by Ronnie Yell.

Tyrell Sutton scored the Als’ only major on the following play to even things up, only to have the visitors respond with an eight-play scoring drive on their own. Lulay’s quarterback sneak was the dagger and Jennings deserves kudos for once again finishing strong.

“That’s what he does, man,” said Johnson. “The man is very resilient and tremendously relaxed back there. The offence never sensed any panic from him. Being a leader I try to make sure everything is everything and JJ did his thing at the end of the game. We’re just piggybacking what we did last year. We’re road warriors.”

On defence, Solomon Elimimian was a force, setting a new single game franchise record of 15 tackles. He also became the first in franchise history to surpass 600 for his career. Is there anything this guy cannot do?

Jennings and the offence averaged seven yards on second down plays. Their ability to convert on second and long was there from the get go when Shaq Johnson made a nine-yard catch on the second play from scrimmage.

“When a play like that happens and gets called back you just take a long walk. It’s exhausting, but it’s a long season and there will be opportunities to get it back. We’re only three games in and I think there will be another one out there for me. I’ll make it. We’re locking in, there is a couple of new pieces and we’re starting to play with a little more cohesiveness.”- Burnett on what went through his mind after the big pick six was called back.

“The guys were great about it, they were professionals. We knew it was going to be a tough game and it was. For them to come out east and win both games… Now they can go home and relax. We’re back on the road on Thursday, right? If the fourth quarter is our best quarter, nothing wrong with that.” 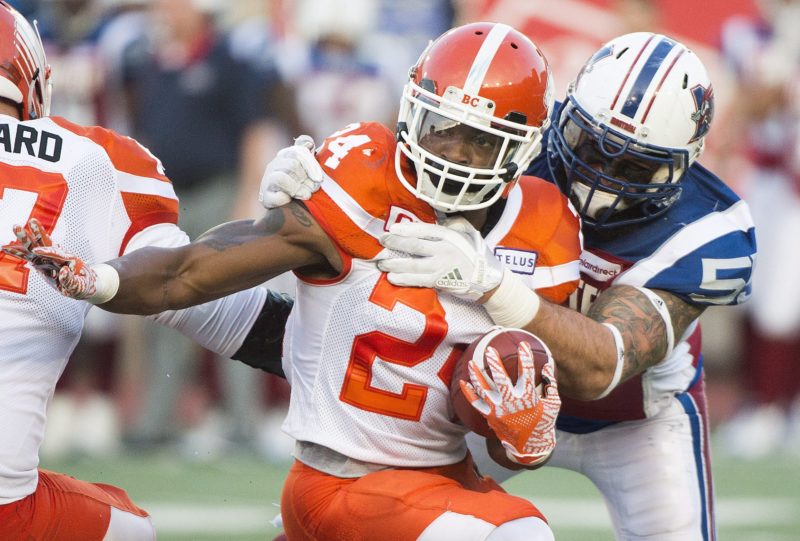 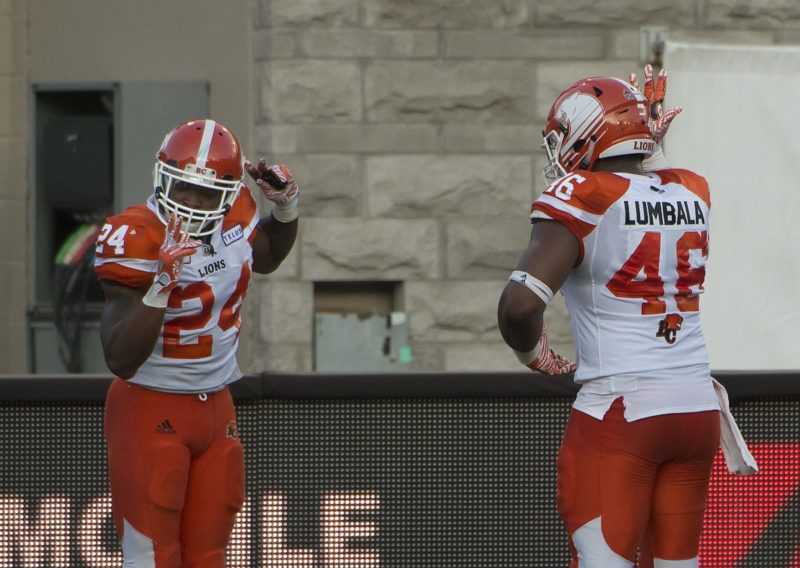 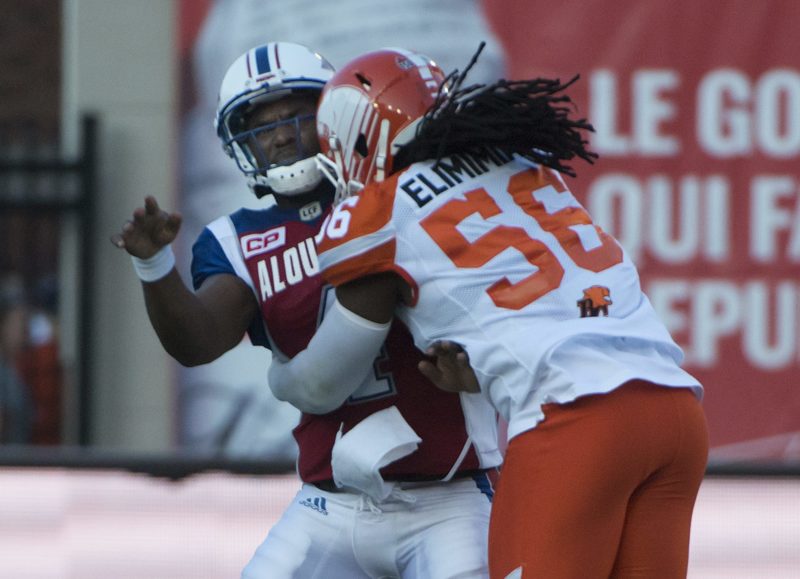 Any more doubts about this defence? To come all the way east for two games and only allow one touchdown in each of them has to be considered one of the best storylines so far this season. Burnett has helped them become even more dynamic and the secondary deserves full marks.

What more can you say about Elimimian? He tied Calvin Tiggle for second most tackles in a single game, just one behind the all-time record still owned by Reggie Hunt. Elimimian’s biggest play of the night was probably when he tripped up Durant short of first down yardage on Montreal’s second drive of the game. Thanks to number 56, they set the tone real early.

Apologies if we keep pumping his tires, but how about Long averaging 50.2 yards per punt and pinning the Alouettes deep (before their own 20) on at least three occasions? Perhaps some of those who became impatient after his first taste of CFL action will start to cut the hardworking rookie some slack.

Although he is only in year two, Johnson has turned into one of the team’s best leaders. His ability to lead matches his traits on the field: bruising and hard nosed. His first score of the night was symbolic of who he is. A guy that pays the price and never gives up on a play. He took some hits tonight as always. And he was much better for it. What a night on the McGill campus.

The winning score wasn’t Lulay’s only big contribution. He alerted Buono of a replay that compelled the coach to challenge for pass interference in the 3rd quarter, a review he would win. Instead of giving the ball back, they marched down the field to set up Long for his chip shot. Debatable call? Could have been. But they made Montreal pay.

The most impressive Jennings stat? How about the fact he has engineered a league best eight winning touchdown drives in the fourth quarter since the start of 2016?