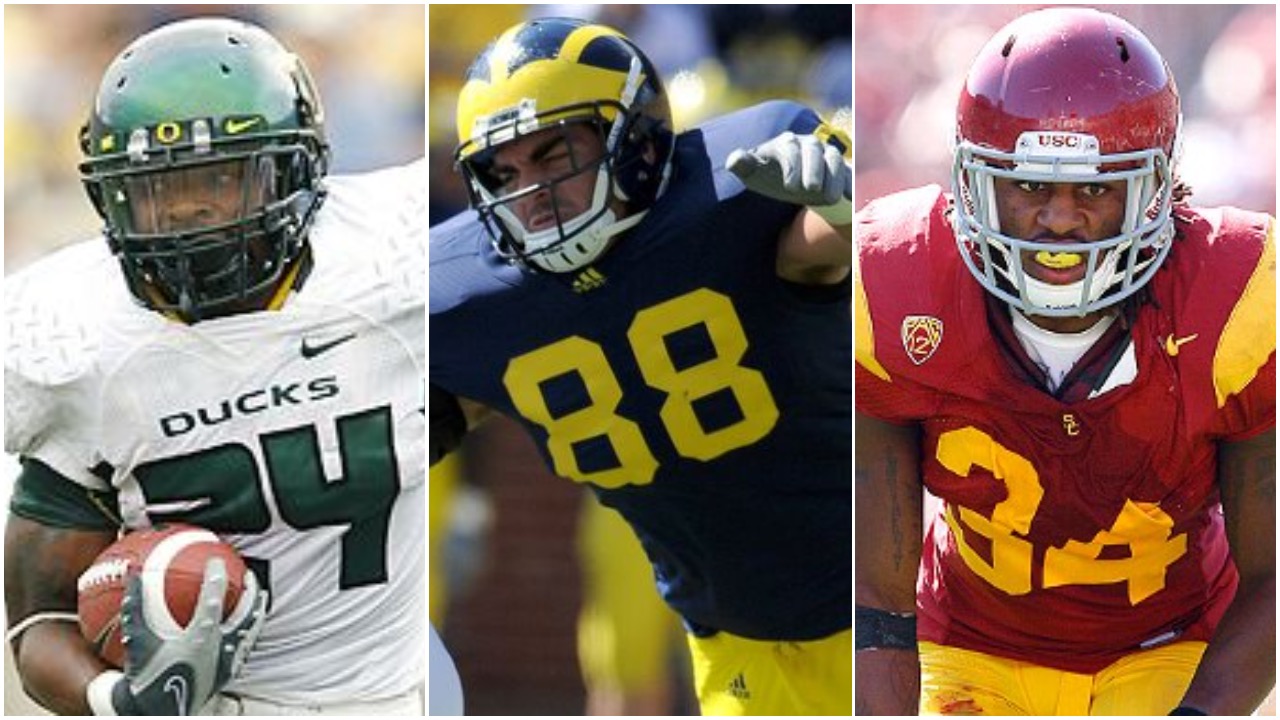 Playing college football in the United States can be summed up in one word – fun. It’s fun to play in front of 100,000 cheering fans on a Saturday afternoon, it’s fun to line-up next to your best friends and it’s fun to go to class on Monday morning after a big win against a bitter rival.

The 2017 NCAA football season kicked off on August 26 and many of the BC Lions were tuned-in to watch their alma maters open the season. Playing college football has left an indelible mark on everyone on the Lions’ roster, and we decided to talk to a few of the players about their experiences as student athletes.

Craig Roh was a highly sought-after recruit following a stellar career at Chaparral High School in Scottsdale, AZ, but the powerful defensive linemen ultimately opted to attend the University of Michigan. Roh was indispensable to the Maize and Blue during his four years on campus, starting a record 51 consecutive contests for the Wolverines.

“I chose to go to Michigan because it was the quintessential college experience,” said Roh on his decision to become a Wolverine. “[Ann Arbor] is a great college town, you have 120,000 people showing up to games every weekend.”

“I met a guy at Michigan’s Fan Fest who named his son Mason Blue for Maize and Blue because he was such a big fan of Michigan. That is the moment I realized how important college football is to people.” 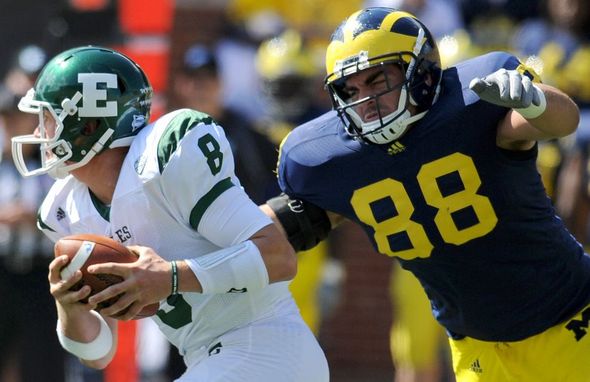 The Michigan Wolverines are one of the most accomplished programs in all of college football, and almost every week is a rivalry game for them. Whether it be battling the Notre Dame Fighting Irish, playing for state supremacy with the Michigan State Spartans, the Little Brown Jug with the University of Minnesota or simply taking on the Ohio State Buckeyes in what fans refer to as “The Game”, Michigan’s rivalry games are some of the biggest in the nation.

“With Ohio State, it seemed like there was mutual respect between both programs battling at it,” said Roh on the Wolverines most historic rival. “But with Michigan State, that was just dirty, disgusting football. The Spartans always came in with the mentality to be horrible humans, and they did that every time.”

The city of Ann Arbor is home to the University of Michigan and has roughly 120,000 residents. The Wolverines play their home games at Michigan Stadium, known as ‘The Big House’, which has a capacity of 107,601. Famous for selling out every game, it’s fair to say that the majority of Ann Arborites (yes, that’s what they are called) are in the stands at every Michigan home game.

“I remember one game, it was the first Notre Dame night game in my junior year, it was so loud that I couldn’t see in front of me,” recalled Roh. “All the sound that night was converging on one location.”

Jeremiah Johnson was fortunate to spend four seasons playing at the football factory known as the University of Oregon. The Leos starting running back had a brilliant career with the Ducks, amassing 2,336 yards rushing and 30 scores. His best season came a senior in 2008, when he led Oregon with 1,201 rushing yards and 13 touchdowns on the ground.

“It was awesome,” said JJ on his experience at Oregon. “You got to play with the best players in the country. The fans there are incredible and the noise at the stadium is unmatched, no one is louder than us. It makes you want to go out there and give it your all.” 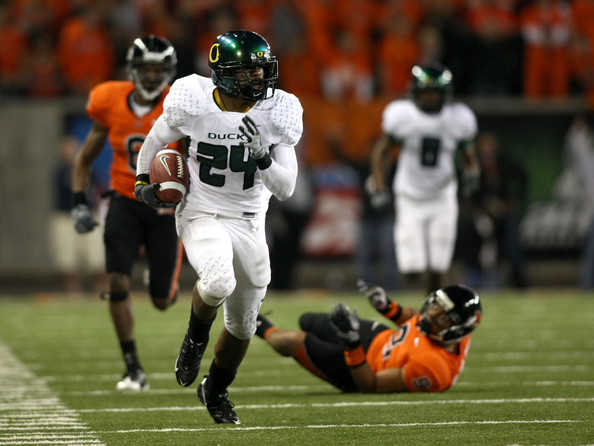 During the week, Eugene, OR is a quirky farming community in western Oregon but once the leaves start changing, Eugene becomes a duck-crazed boondock on Saturday afternoons. Despite only housing a little over 66,000 fans, Autzen Stadium, home to the Ducks, is one of the loudest stadiums in the country. Home field advantage is a big reason why Oregon has won four Pac-12 Championships and a pair of Rose Bowls since 2009.

“I remember one game I decided to do the duck walk to the game with all the students. The duck walk is when you walk across the Willamette River to the stadium on game day. Hearing how excited the fans were and seeing how juiced they were, that moment was one of my best moments as a student athlete.”

The Oregon Ducks may have fewer rivals than Michigan, but their hatred of the Oregon State Beavers is unparrelled according to Jeremiah. Known as ‘The Civil War’, the Ducks and Beavers first met 123 years ago on November 3, 1894. In the 120 meetings since, Oregon has won 63 times, lost 47 times and tied the Beavers 10 times.

“I don’t care if you’re the top team in the country, if you lose The Civil War, you feel like you had a losing season,” said Johnson on the importance of playing the Beavers. “It doesn’t matter what your record is, every year you come and play one game to decide who is the best team in Oregon.”

“As a freshman, you don’t really understand the roots of the rivalry. But the older guys tell you stories and the animosity grows. I’ll be a beaver hater for the rest of my life.”

Steven Clarke helped transform the Vanderbilt Commodores from a perennial loser into a title contender during his four years on campus. Vandy won just two games during Clarke’s freshman campaign in 2010, but they combined to win 18 games and a pair of bowl games over the course of his final two years on campus.

“At first, we were looked at as the worst team in the SEC,” said Clarke of his early years with the Commodores. “But after my first year, we hired a whole new coaching staff and we showed everyone that we were a good team.” 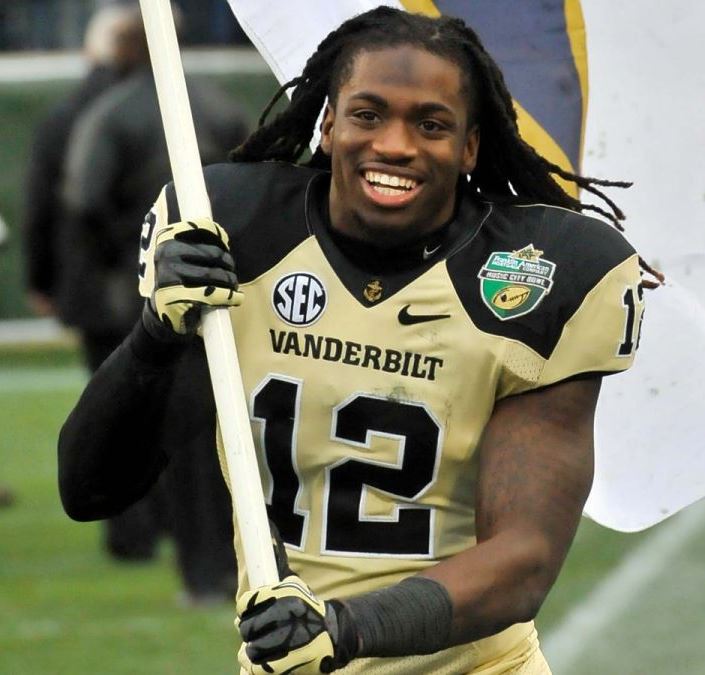 “We took the program to new heights, we finished in the top-25 in my junior and senior seasons. I would honestly recommend going to an SEC school because the atmosphere and school spirit at all those schools like Alabama, Florida, LSU is amazing.”

Playing professionally is the goal of every college athlete, but nothing replicates the experience of playing for your school with classmates, professors and alumni watching from the stands.

“In college, you have everyone supporting you,” said Clarke in reference to college football fans. “You have the student body, you have your family and then the actual fans that live in the city. In the pros, you don’t interact with the fans on a day-to-day basis like you do on campus in college. It’s a fun time.”

Vanderbilt is located in Nashville, TN and naturally their biggest rival is the Tennessee Volunteers. With alumni like Peyton Manning and Reggie White, the Vols have long been viewed within the state as the superior football program. Understandably, this has always gotten under the skin of Vandy and their fans.

“It was so big,” Clarke said of their annual date with the Vols. “We would be driving down the street and fans would see us and shout ‘kick Tennessee’s butt’. During my senior year, we beat them at Tennessee and their fans were throwing beer bottles and everything like that on the field.”

“In Texas, you’ve got football and oil, and Texas Tech is the definition of that.” By that definition, Micah Awe, a Petroleum Engineering major, was a perfect fit to play his college football for the Texas Tech Red Raiders in Lubbock, TX. 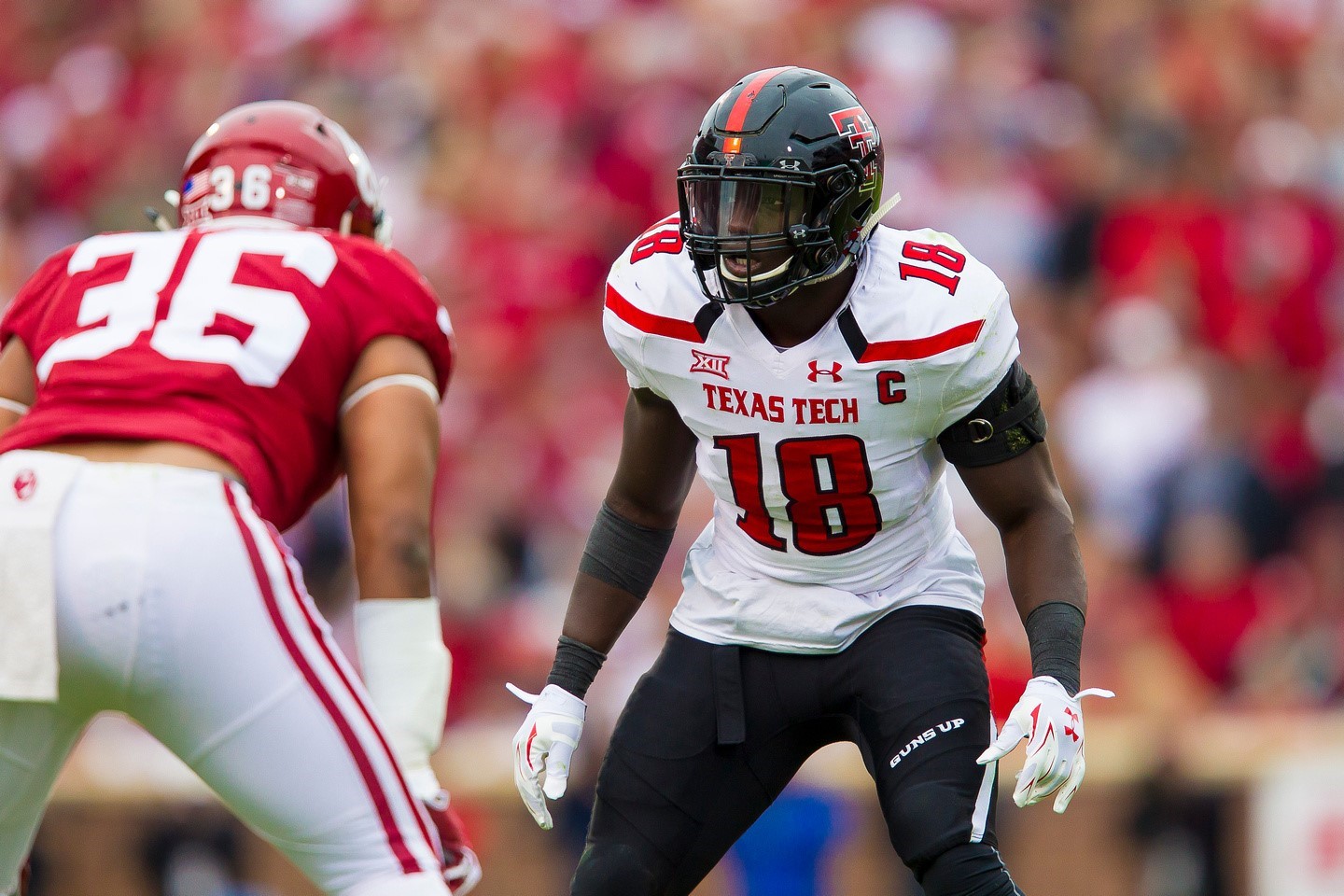 “I remember playing LSU during my senior year in the Texas Bowl at NRG Stadium in Houston and I had to give a right or left call because I was the middle linebacker and I couldn’t even hear myself. I could barely even hear myself think, that’s how loud it was. There were 70,000 Texas Tech fans and LSU fans and I was like ‘oh my goodness’. It was crazy, but it’s a great experience. It was a dream come true, honestly.”

Awe spent four seasons hitting running backs and books in Lubbock Texas, exiting with a degree in Petroleum Engineering. The Nigerian born linebacker didn’t take the easy route in college, choosing instead to study equally as hard in the classroom as he did in the defensive meeting room.

“My favourite part of being a student-athlete was being with my classmates,” said Awe. “I remember being in engineering class the day after we lost and my professor jokingly saying, ‘sorry that you lost’ and everyone laughed at me because I was the only football player. It was a funny moment, but it also motivated me because I didn’t want to experience that again.”

“My senior year was very fun because in Petroleum Engineering you start to see the same people from all four years and by senior year we all knew each other really well. It was cool how a lot of my classmates would come up to me after a game and say, ‘good game last night’. I knew they were lying if we had lost, but earning the respect of my classmates on and off the field was the best part of college for me.”

Tony Burnett has three great loves in his life: his family, football and the University of Southern California. Tony had a great view of the Trojans dominance on the football field in the early part of the century as he grew up in Watts, CA. Playing for USC was something he always dreamt of doing.

“It was an amazing experience,” said the former walk-on about his playing days at USC. “We had 90,000 strong at every home game. It was cool to be a part of history there. SC has had so many All-Americans, first round draft picks and hall of famers. The tradition of the program makes you hold yourself to a higher standard because you’re following those guys and you don’t want to let them down.”

Los Angeles is known for being a bandwagon sports market, but if there is one team the City of Angels is loyal to, it’s USC. Whether the Trojans have a winning record or a losing record, the stands are always full on Saturdays at the Los Angeles Memorial Coliseum. 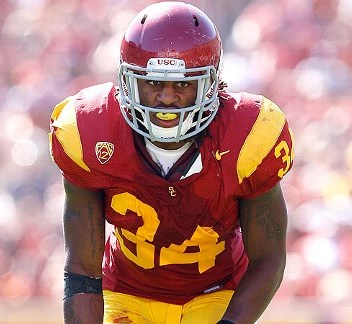 “When you talk about the Coliseum, probably the craziest section in the whole stadium is the student section. It’s nuts there. I actually had a chance to go back and watch a game from the student section after I graduated and that was the most fun I’ve ever had watching football.”

With 11 National Championships and 24 Rose Bowl wins, USC is one of the most storied programs in college football history. This level of success breeds animosity with other top-level schools and the Trojans have no shortage of rivalries. Notre Dame is their most notable rival, but Stanford is actually their oldest rival and they also battle UCLA annually for the Victory Bell.

“Well, first thing’s first, Notre Dame are a bunch of bums,” Burnett says with a chuckle when asked about his alma mater’s most hated rival. “Man, rivalries are so fun. Notre Dame, obviously is just like SC, a storied program. UCLA has some great players, unfortunately Troy Aikman, who is one of my favourite players went there, but it’s okay, I understand people have choices to make.”

“Rivalry games, you talk about the tension in the building, man the fans are crazy and those are always the loudest games. When you play those games, it’s deafening.”

Tradition, pageantry and joy. Those three words describe college football south of the 49th parallel. The BC Lions are committed to working together as one to win the Grey Cup in 2017, but you can bet that the players will be talking trash all fall as their schools fight for the right to be on top of the polls at the end of the college football season.