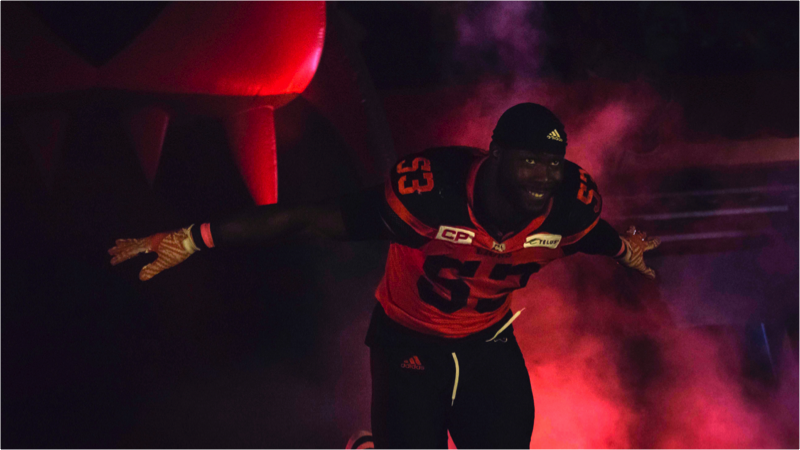 In what has turned out to be a rather interesting 64th campaign in franchise history, the BC Lions have played 12 games and dressed just as many defensive linemen. They welcomed the 13th with open arms on Monday as Alex Bazzie officially returned to the den after a go-around in the NFL that proved to be just as interesting and eventful.

He chose a return to the Lions over at least two other serious CFL suitors. You couldn’t wipe the smile off of the normally intimidating figure’s face as he made the rounds to hug and catch up with his new/old teammates.

“It is like coming back from out of town and greeting your family again. It feels good,” said Bazzie after going through a physical.

“I’m very excited to get to come back and work with a great group of men that I left after the season. Just being able to have that opportunity and to work with the same coaching staff, I’m very familiar with everybody.”

The 27-year old may prove to be just what this defensive front needs. Injuries and a struggling pass rush have been two big reasons for the roster juggling. Bazzie kept close tabs on his friends while trying to crack the Arizona Cardinals roster over the summer. The Marshall University product feels they are capable of re-discovering that magic.

“We’re not doing as good statistically in the passing game, as far as getting to the quarterback and making him feel uncomfortable. I know that the same group of guys are here from last year and that attitude is there, regardless if it’s not showing on film,” explained the Lions’ sack leader from 2016.

“The things you can expect me to bring back are passion, attitude and just love for the game. A lot of times you don’t have to talk much. They always say the film speaks for itself. We have to show what our true identity is.”

Only the Montreal Alouettes have recorded fewer sacks than the Lions this season. Does that fall entirely on the defensive line? That would be an overstatement. But adding a guy who had 29 sacks, 83 defensive tackles and a couple of forced fumbles in his first three seasons here will certainly give this unit a much needed boost as the franchise looks to extend its playoff streak to 21 seasons. 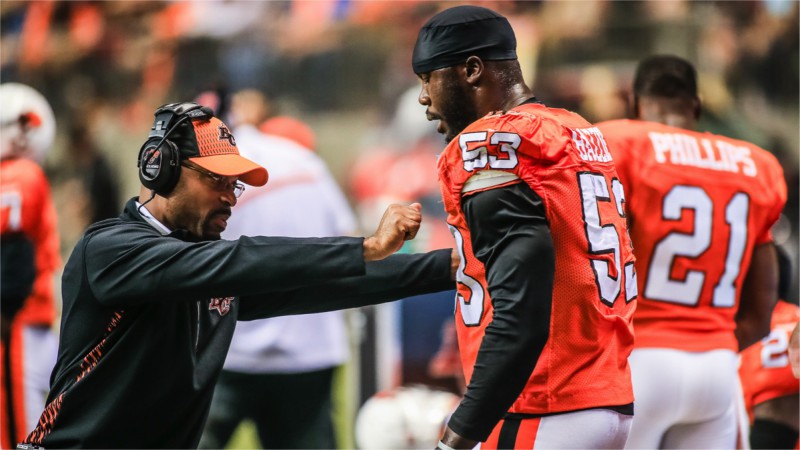 Bazzie’s previous three-year run naturally drew interest from south of the border and he signed a futures deal with the Indianapolis Colts on January 9th. He was waived four months later and spent 24 days as a member of the Carolina Panthers before landing with Arizona.

It was with the Cardinals where Bazzie, having shifted to outside linebacker, felt more at home, suiting up in all five pre-season games and recording 16 combined tackles and three sacks. He credits the coaches and veterans for showing him the ropes.

“Bob Sanders (linebackers coach) was the guy I worked most with down there with Arizona. You talk about somebody who comes to work every day with his hard hat as well,” said Bazzie.

“He holds his players accountable for everything and expects them to show what they can do. That’s a guy with such great knowledge and experience in that league. A lot of people respect it.”

“I was probably working with one of the best groups of guys that I’ve been around over my years; guys like Chandler Jones, Markus Golden, Kareem Martin, Tyron Mathieu and Jarvis Jones,” added the 2016 CFL Western Division All-Star.

“We were all learning from one another and forming a bond. That group of men just embraced me and took me in with open arms. We never looked back. Every day it was laughter and learning tools. That was something that I liked most about it: it was always talking football, always trying to educate one another on the game of football. It was an honour to be with a group of men like that.” 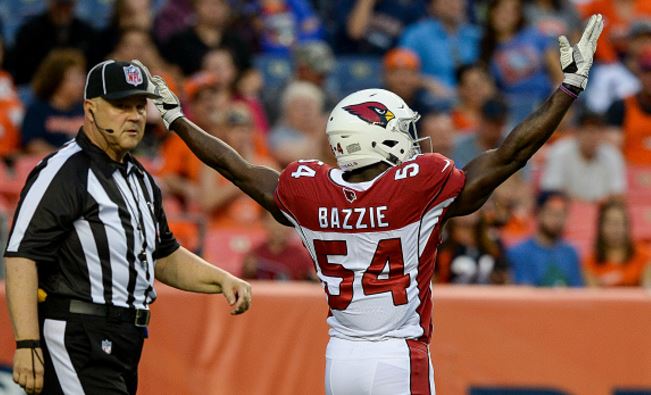 Switching leagues and adjusting to a new position is not something many pros can stomach. Bazzie was also motivated by a few old BC Lions teammates also trying to catch on down south. Richie Leone was with him in Arizona. He kept close tabs on Adam Bighill’s adventures with the New Orleans Saints and also spent some quality time with Bo Lokombo who was trying out close to Bazzie’s Maryland home with the Baltimore Ravens.

“I would follow Adam and keep up with him through Twitter. I remember being happy at the beginning of camp to see him make some noise in one-on-one drills against the running backs. That was the Bighill I know. I was rooting for him throughout the process even though we didn’t keep in contact. That was a mutual thing we had with one another,” said Bazzie.

“I hung out with Bo a couple times before I left for camp. He was probably about 35-40 minutes up the road from me. We got to catch up and talk some football. I was in Arizona with Richie, but Bo is probably the guy I talked to the most. We reached out a lot, even if it wasn’t about football.”

Bazzie accomplished what he could in Arizona. Now he’s more than happy to help this team make some noise over the final six weeks and make a run toward his first Grey Cup.

“I’m very hungry, man. With a lot of the men I went to war with last year still being here this season, I know it’s unfinished business,” claimed Bazzie.

“The same goal is still at stake. Being one game short of the Grey Cup last year, I feel we can still do it. We’re in a tougher situation than last year, but we still have those guys in the building. It’s about finding that chemistry and the ‘it’ factor. Everybody has to click at once and that is going to be something special.”

Lucky 13 on the defensive line? It’s a question the players, coaches and fans are certainly glad we are asking.