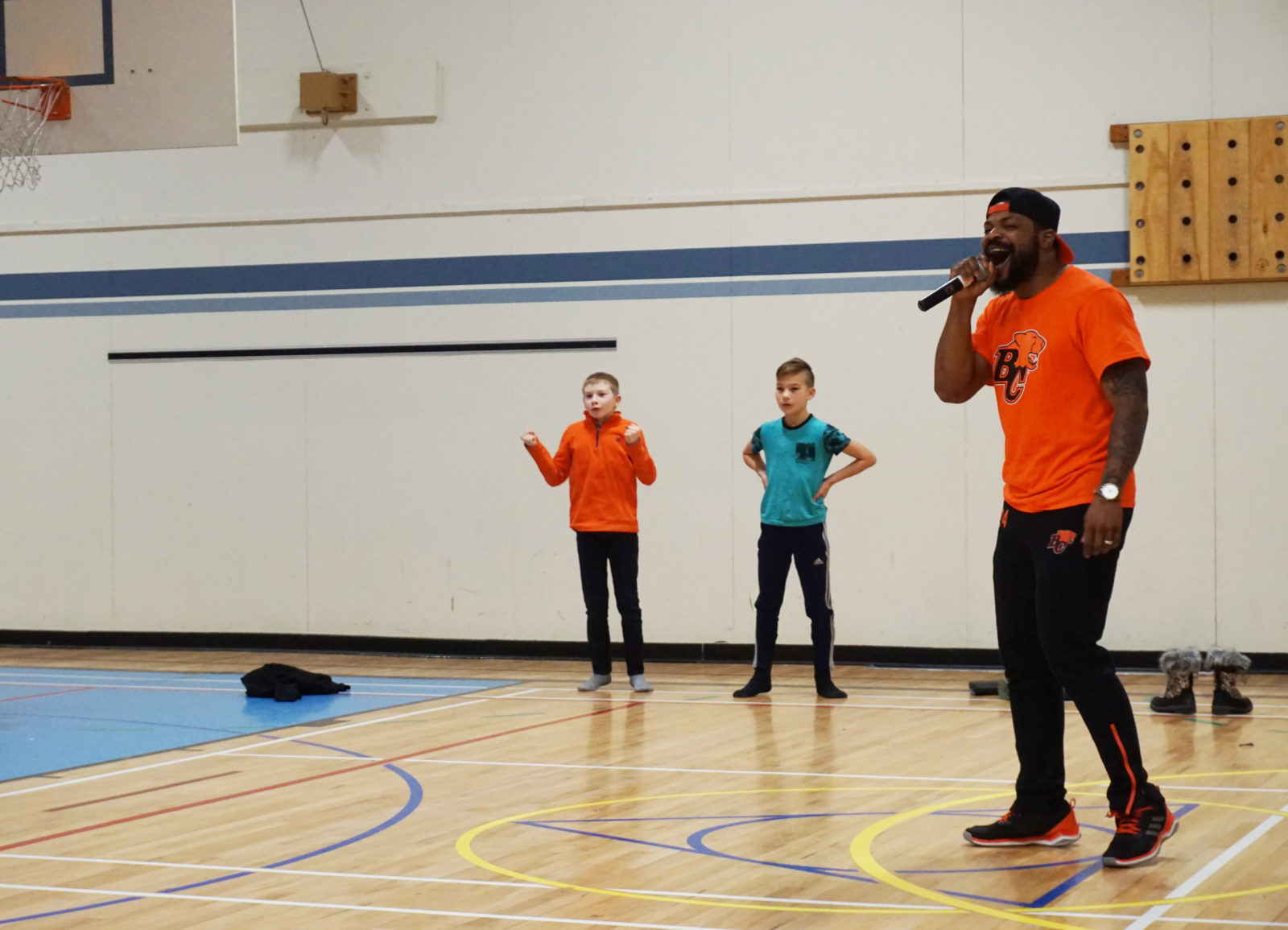 We are 12 days into the New Year and the majority of people are still attempting to keep their New Year’s resolutions. Some people strived to eat healthier, some people committed themselves to hit the gym more often, while others simply decided to work less and play more. The BC Lions and many of their players made it their mission to give back even more than they normally do to the young people of British Columbia in 2018.

The Lions kicked off their offseason community programs yesterday with a visit to Eagle Ridge Elementary School in Coquitlam, BC. Among the programs that will be run at schools across the province are Be More Than a Bystander, Lions Pride, Fortis BC Energy Champions, Lions in the House, and Read, Write and Roar. Some of the players that will be making school visits and community appearances this offseason are Solomon Elimimian, Jeremiah Johnson, Rolly Lumbala, Craig Roh, Jas Dhillon and Matt Bucknor.

At the helm of the various programs and all of the school visits is Jamie Taras. The former CFL All-Star and Tom Pate Memorial Award recipient is the director of community relations for the Lions.

“I have to give credit to the Lions under Bob Ackles and Lui Passaglia, my predecessor, for our commitment to the community,” says Jamie Taras on the Lions giving back. “When Lui came in, he really looked at developing the community programs. We have grown in the years since and we will be doing close to 200 school visits over the next four months.

“All the players that are part of these programs are community minded, they want to be involved in our community, they want to give back. I think they feel like they have a platform to be a positive force in the community and they are taking full advantage of that opportunity.” 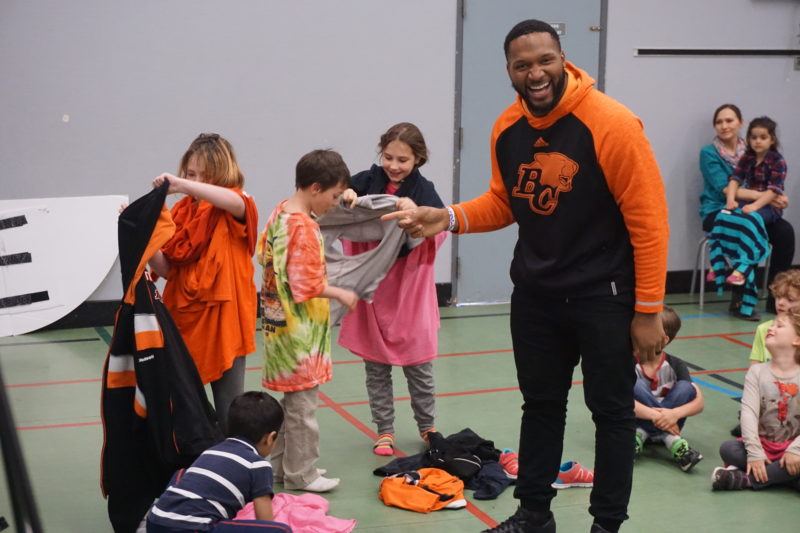 Be More Than a Bystander

“Be More Than a Bystander is about teaching kids that they can help someone in a dangerous situation with your presence,” says Leos defensive back Matt Bucknor. “Sometimes we will see abuse happening and a lot of times people don’t know what to do and that can definitely put you in a difficult spot because you want to help but you don’t know how. Our goal is to equip these students with some tools for how they can help victims.”

Be More Than a Bystander’s message to fight for women’s rights is particularly relevant in today’s world given the spotlight that is currently focused on abuse and the #MeToo movement.

“With everything you see in the media these days, this program is especially important,” Lions running back Jeremiah Johnson says of Be More Than a Bystander and its relevancy to the #MeToo campaign. “Every day it seems like a new story comes out about a celebrity or a politician being accused of sexual harassment.

“Honestly, it just shows us all how much women have endured. For women to go through this type of traumatic event and in some cases to hold it in for years. It so often seems like it’s a man in a position of power committing the crimes which scares off women from coming forward because they are afraid they will lose their job. It’s terrible to see stories like that and hopefully programs like Be More Than a Bystander can help end the abuse.” 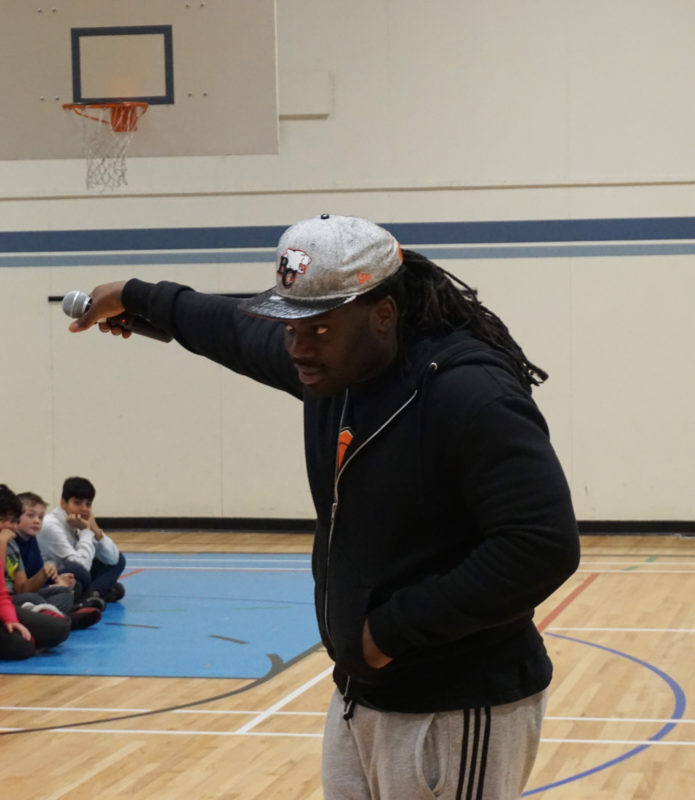 Lions Pride is an initiative created by the Lions and partnered with the Community Crime Prevention Division of the Ministry of Public Safety to promote saying no to gangs. Lions Pride is geared towards young people and is designed to give them the tools to make positive decisions.

“Back when I was in high school, a lot of people were looking up to drug dealers,” says Jeremiah on the importance Lions Pride has. “Everyone wanted to have the chains, wear the fancy clothes and drive the cars with the big rims. That’s what people looked up to.

“A lot of people look at me and say, ‘you’re just a dumb football player or a jock’, but because I am football player, I can use my platform to get a child on the right track. I always speak from the heart and my goal is to encourage young people to value themselves enough to avoid gangs.”

Fortis BC Energy Champions is an innovative program with the goal to teach children, kindergarten through grade seven, the value of caring for the environment. Over the course of the next four months, the Lions will visit 75 schools around the province in an effort to literally save the world.

Lions in the House

Lions in the House is a community outreach program designed specifically for middle-school aged kids and preaches the opportunities presented by the trades. The Lions goal is to shine a light on careers in the trades and encourage youth to follow their passion. 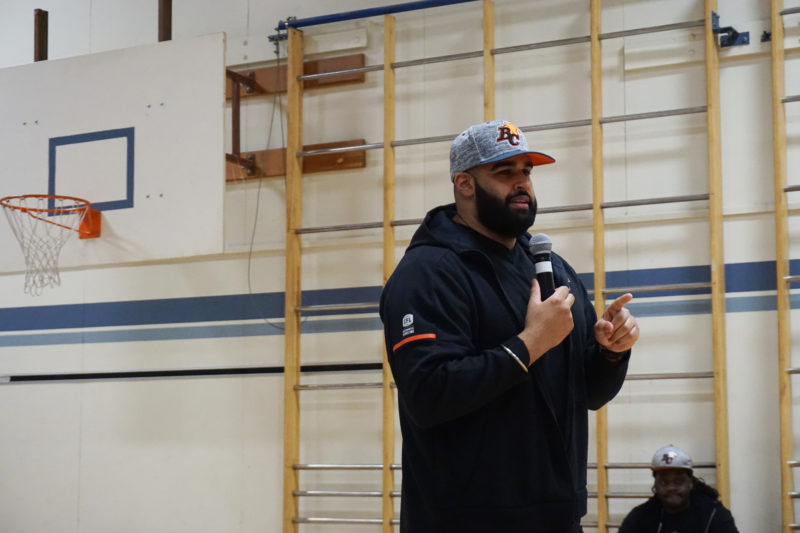 “We just want to emphasize to kids that going to college and university are not the only way to make money,” says Johnson on the mission of the Lions in the House program. “What I find really interesting about BC is that while kids are in high school, you can learn a trade. You can work on getting your career in trades started while you’re still in school and then you are way ahead of the pack by the time you graduate. Plus, you get a little money in your pocket while you learn.”

Founded in 2001, Read, Write and Roar has encouraged thousands of primary school children to create a journal to help improve their reading and writing skills. The literacy program worked with 14 school districts across BC in 2017.

The BC Lions are British Columbia’s team. They are the only team that has the name, British Columbia, and they did so because the players and the staff represent the entire province, not just one city.

A big part in representing a province is supporting the communities within it. The Leos and their players take great pride in the impact they can make. The school visits are province wide, as are the community appearances.

“We believe that we are BC’s team,” says Taras. “We are there for the entire province. We will be traveling across BC, doing 11 road trips from January to May. We try to reach as many places as we can with these messages and these programs.”

Click here for more information on all the community programs run by the Lions.