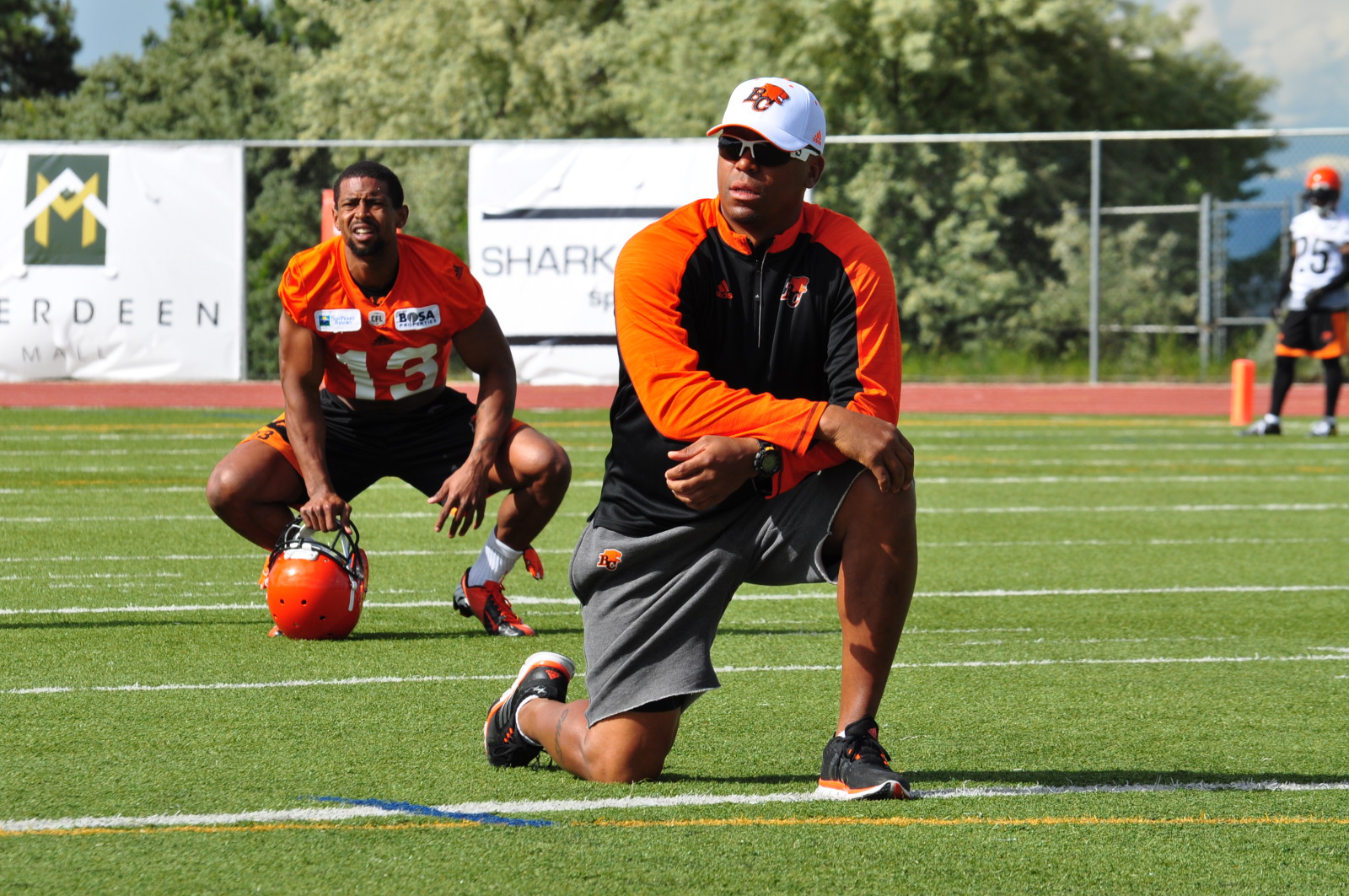 Geroy Simon briefly turns on his monitor for an update in college hoops. With Texas and Nevada going down to the wire and his bracket already in danger of becoming an afterthought in round one, it certainly isn’t hard to quickly re-shift his focus to the task at hand.

The spreadsheets, player profiles and booklets he is assembling at his desk are all you need to know: it is combine season. As you can already tell, Superman lives for this time of year.

“This is when all the information you’ve been compiling since August comes together,” explained the Canadian Football Hall of Fame inductee.

“Finding players is a tedious process; figuring out where they’re at, where they’re playing and if they can play at our level. It’s an exciting time because now we’re getting down to the specifics.” 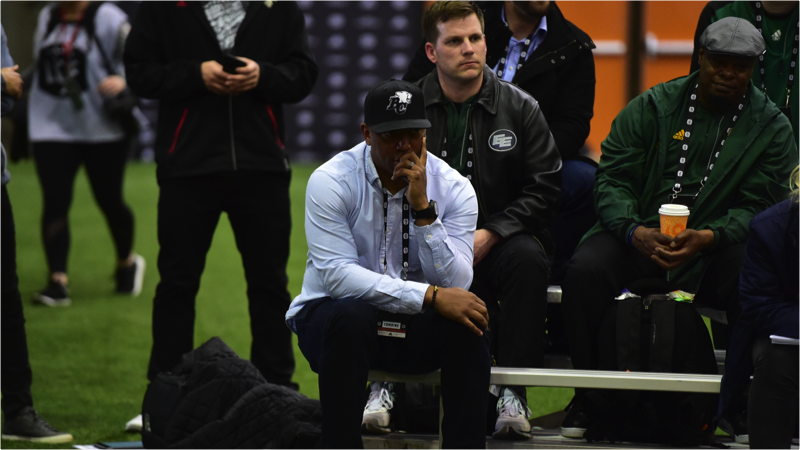 Geroy Simon observes the action at the 2017 Combine in Regina. Current Lions’ director of player personnel Torey Hunter (back right) is also part of the onlookers.

The CFL National Combine presented by adidas officially kicks off this coming Friday in Winnipeg. Simon, in his third season as the club’s director of Canadian scouting, is compiling all of the information for GM Ed Hervey and the other scouts who will be on hand in the Manitoba capital.

A final precursor to the May 3rd CFL Draft, the National Combine brings together roughly 50 of the top Canadian prospects. Many of those will have advanced from the Eastern, Ontario and Western Regional combine, the latter taking place this Thursday. Prospects will be evaluated in drills such as the 40-yard dash, 3 cone drill, bench press and individual drills.

What separates the contenders from pretenders in this league is the quality of Canadian content on the roster. The combine gives Simon and other scouts a chance to see things they wouldn’t easily catch on film.

“You finally get to talk to the players. A lot of times if I go to a game I can pull a player aside but this is the time where we have a chance to sit down with them and talk to them about some of their personal stuff,” said Simon.

“We don’t have to dig at them too much but you just want to get an idea of what type of person the guy is, is, what type of background they grew up in and where they see themselves going in the future.”

The combine can also bring about surprises. Simon can think of one current example on the Lions’ roster whose stock rose after the combine. 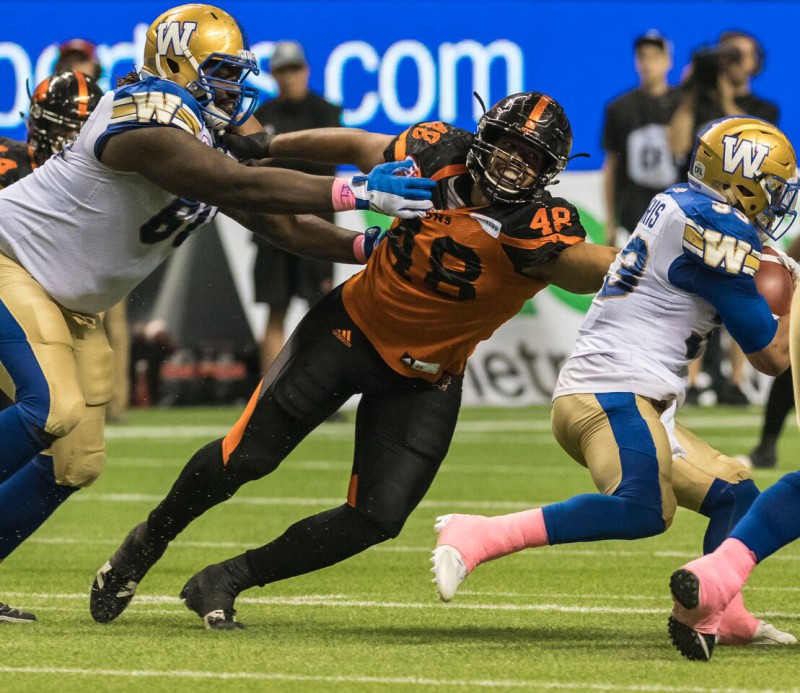 Maxx Forde was drafted in the seventh round in 2015 out of the University of Idaho.

“When you look at a guy like Maxx Forde, he was a late draft pick for us (seventh round in 2015),” said Simon.

“Even though he played at a US school he had production but was coming off an injury. We weren’t quite sure on what he was going to be. Then he tested well at the combine so it gives you a chance to go back and look at it. Some guys will surprise you. Other guys you think might test well but then their performance changes your mind. It goes both ways.”

There was plenty of elite talent on display at last year’s combine. Junior Luke was one of the top defensive linemen in Regina and the Lions were able to grab him at seventh overall, four picks after landing one of their top targets in receiver Danny Vandervoort.

“Junior is a very good player and I had him high on my list,” recalled Simon.

“He is one that just kind of verifies everything that you have seen on film. He gets off the ball quick, he’s good with his hands and he’s very disruptive. You go to the combine and you see his testing numbers and realize he is very quick in the first ten yards of the 40 (yard dash) and he’s pretty strong, even if that’s not so much weight room strength. You have to consider all of those options but he’s definitely one of those guys who verifies information that you already have going into combine week.” 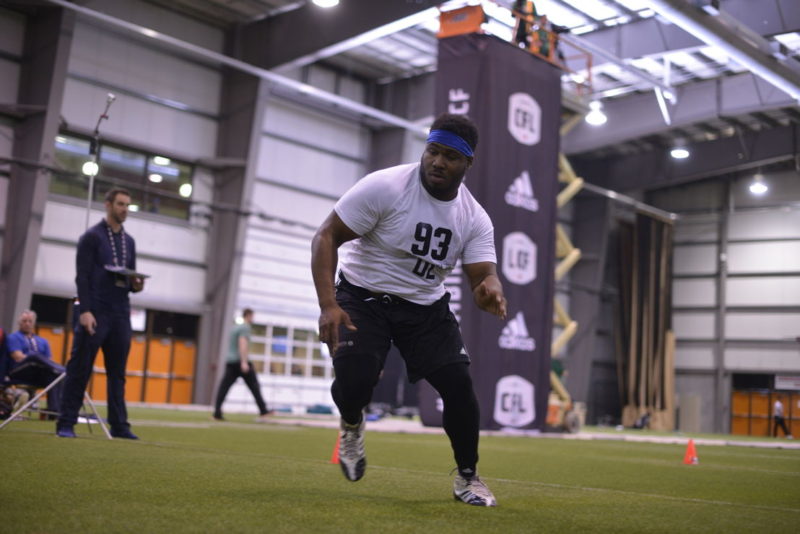 It truly is the Christmas season for scouts. The Lions have already held US free agent camps in Los Angeles and Dallas with trips to San Jose, Atlanta, Washington DC and Seattle still to come.

Simon also just returned from the University of Nebraska where he attended the Pro Day for offensive lineman David Knevel, a top Canadian prospect who has opted to skip the combine.

With the importance of improving the offensive line serving as Hervey’s mission statement since day one, the brass can leave no stone unturned.

The event has also grown significantly since Simon first ventured into scouting five years ago. The National Combine is now held in conjunction with Mark’s CFL Week where top players from all of the teams come together for the TSN photo shoots and other fun events with fans. The Lions will be represented by Jonathon Jennings, Emmanuel Arceneaux, Bryan Burnham, Solomon Elimimian and newcomer Odell Willis.

“I think it’s great that the CFL has made it what it is. Combine week kind of kicks off the year, it gets us prepared for the season and draft and lets you see players who have switched teams so it’s going to be a good week. I am looking forward to it.”

A different kind of March Madness. Especially if there are a couple more late round gems out there.