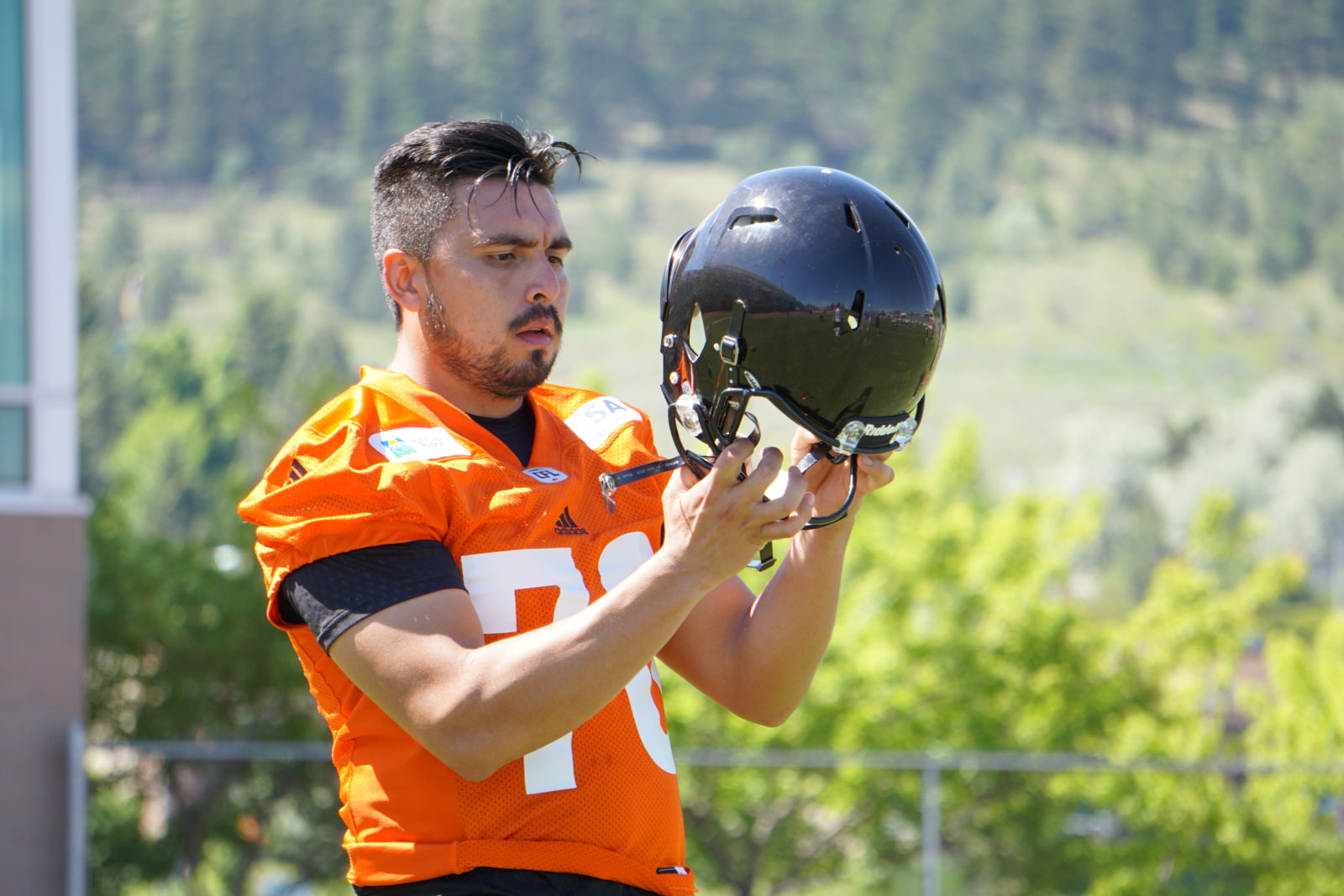 For most of his young life, Jose Maltos wasn’t any different than most of the ‘futbol’ players in his home country. It was in high school where his kicking skills caught the attention of some coaches from that other variation of the game.

“I was pretty good in soccer so they invited me to kick,” recalled Maltos following Wednesday’s practice in Kamloops.

“And then when I got into college (at Universidad Autonoma de Nuevo or UANL for short),  I started to learn more about the kicking and punting game. I ended up being their starter.”

It all paid off when he was offered a scholarship to Southern Methodist University. And although issues with his transcripts would ultimately prevent him from attending and playing there, he had the support of two pretty important coaches from the program.

“I had a previous relationship with both Jeff Reinebold and June Jones. They invited me to a Pro Day in 2012,” explains Maltos.

“That was only opportunity to get into the NFL at that time.”

And he would parlay it into workouts with both the Miami Dolphins and Dallas Cowboys before a stint on the New Orleans Saints training camp roster in August of 2013. That’s as close as he would get. Five years later, he is thrilled to be in Kamloops and have the opportunity to learn from Reinebold and Ty Long and prove he can still play pro football. Just how dedicated is Maltos? He drove nine hours from Monterrey to Dallas for the club’s free agent camp earlier this month.

“I’m thankful to the organization, mainly Ed Hervey, Wally and coach Reinebold for the opportunity they have given me,” says Maltos.

“They invited me (to Dallas) via email on a Thursday and I was kicking there on Saturday. I still have aspirations to be a pro kicker so I figured that was an opportunity I couldn’t pass up. I did pretty well and that’s why I’m here.”

“We also knew him from the NFL workouts he was at,” added head coach Wally Buono.

“He’s learning the CFL game and right now it’s probably a lot for him, but he has a good mentor in Ty Long. You can see his progress. His biggest strengths are probably his kickoffs and field goals and that’s not something that we’ve really done a lot of work on yet.” 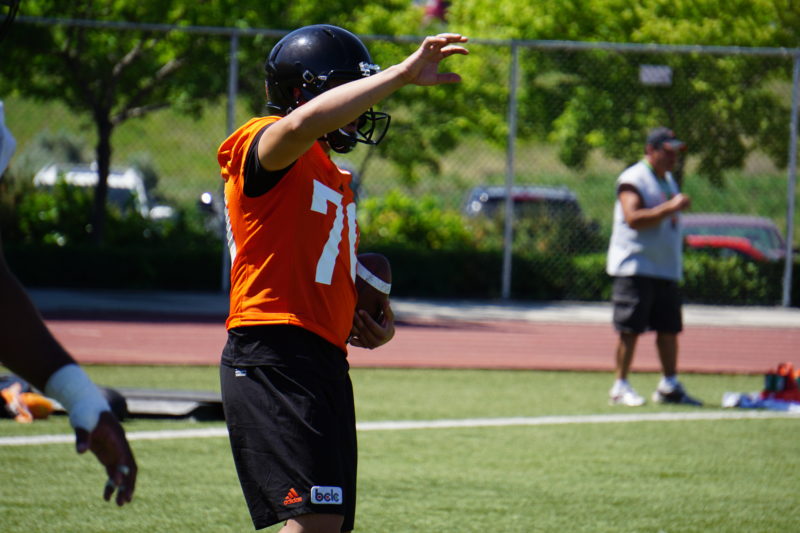 Maltos represented Mexico at the 2011 IFAF International World Cup in Austria where his 56-yard field goal set an all-time tournament record. The second highest total at the event? Maltos’ 53-yarder in the same year.

Even if he doesn’t make it as a long-term pro, Maltos indeed has one heck of a story to tell. Not many Mexican athletes get to experience this type of environment that training camp has to offer.

“I’ve met great players and players who are going to be Pro Football Hall of Famers one day,” stated Maltos.

“In New Orleans, I got to learn from Drew Brees and their great punter Thomas Morestead. I was happy to be there and get that experience.”

It’s been a long and windy road from Monterrey to Kamloops. But you can bet that for Maltos it has been worth every mile.

Buono once again praised his players for not feeling the ill effects of back-to-back ‘power practices. Going four straight hours with a 20-minute break in between is quite the contrast from the separate morning and afternoon sessions of years’ past.

He says its a credit to longtime trainer Bill Reichelt, Head Athletic Therapist Tristan Sandhu, Strength and Conditioning Coach Chris Boyko and all of their respective staff members.

“I give them a lot of credit, not just for today but all the things they do in the offseason; all of the conditioning things, all of the rehab things.

When you look at it the last five years, our team consistently is the lowest when it comes to injury costs. When you look at the work they do and the commitment they put into helping the players stay healthy, it’s no accident.” 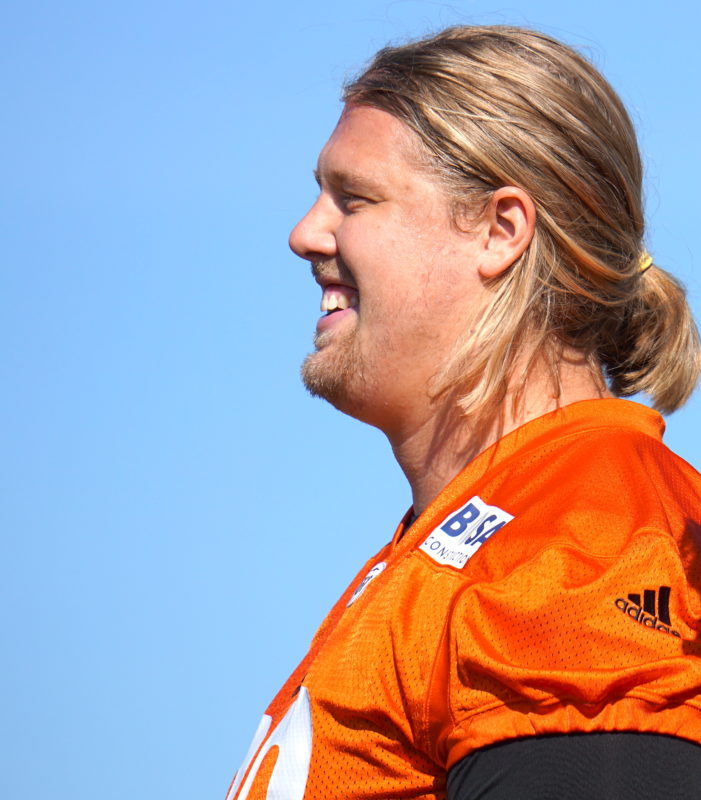 Other observations: Odell Willis and Gabriel Knapton, the new bookends on the defensive line, have come as advertised through two days of padded practice. Willis has proven he can still get to the quarterback and that he can very much be an every-down player in 2018. Knapton’s should also help the defensive line have more pass knockdowns this season.

Props to David Foucault for making the most of his reps. at right guard during the team drills. The centerpiece of last year’s Jovan Olafioye trade struggled in his first year in the den and Buono pointed out some of the weight he put on this offseason should help him regain some of that strength. Olafioye practiced on Wednesday at the right tackle spot.

We spoke in our positional preview about some of the intriguing athletes at the receiver position. Notable performances so far have included Ricky Collins Jr., Shaq Johnson and Tyler Davis.

Quarterback Cody Fajardo has demonstrated good instincts and solid arm strength. As expected, he has proven he can be a good scrambler out of the pocket and turn broken plays into positive yards with his feet.