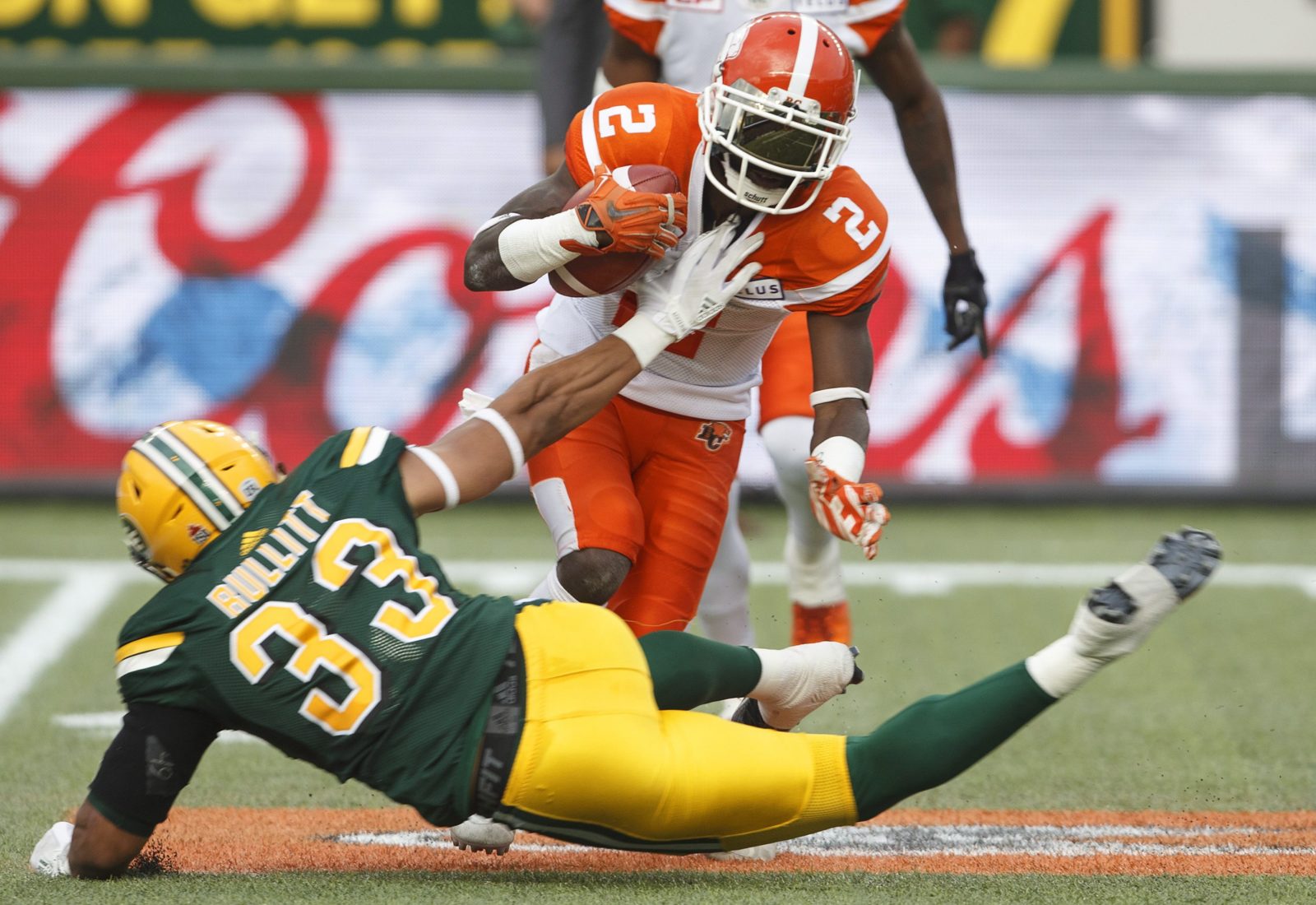 B.C. Lions running back Chris Rainey (2) is taken down by Edmonton Eskimos linebacker Terrance Bullitt (33) during first half CFL action in Edmonton, Alta., on Friday July 28, 2017. THE CANADIAN PRESS/Jason Franson

It was kind of a running joke outside the two CFL markets throughout the offseason: “when will the B.C. Lions change their colours to green and gold?” True, the 2018 edition of the squad has a large portion of ex-Eskimos. It started with the hire of GM Ed Hervey last November, subsequent addition of president Rick LeLacheur in time for the new year and trickled over into the free agent period.

After a trade for Odell Willis in early February, no less than nine additions in free agency once suited up in the Alberta capital, including defensive back Garry Peters.  As he and a few others prepare for a return to their former home this Friday, the former Clemson star says there should be more positives than negatives to the Edmonton invasion.

“It’s made my transition easier because I know what a lot of these guys are about and the kind of winning attitude they are bringing to our program,” explained Peters.

“Not only are these teammates of mine, but they are also close friends. I train with Odell in Atlanta all the time, Marcell (Young) has become like a brother to me and I have always looked up to him so for me, having all of these guys here with me has been a huge help as I get adjusted to a new team and a new city.”

After a season-opening win over Montreal and bye in week number two, Peters and the Lions are also looking to prove they belong in a competitive Western Division. They are also no doubt facing a hungry Eskimos squad, in wake of their 38-21 home loss to the Hamilton Tiger-Cats last Friday. One thing remains the same: in order to have any success, they must find a way to contain 2017 CFL Most Outstanding Player Mike Reilly. The former Lions backup has thrown for 694 yards through two weeks, tops in the league. Peters and his friends might know a thing or two after practicing against him on a regular basis.

“Montreal was a good test, but I think Edmonton is going to be an even bigger one,” said Peters.

“The key for Mike is he’s so smart and great at reading defences. You’ve got to give him pre-snap looks or else he’s going to kill you and pick you apart. The main thing with him is disguising coverages and communication. He makes perfect throws and makes it hard on you, but it can definitely be done.” 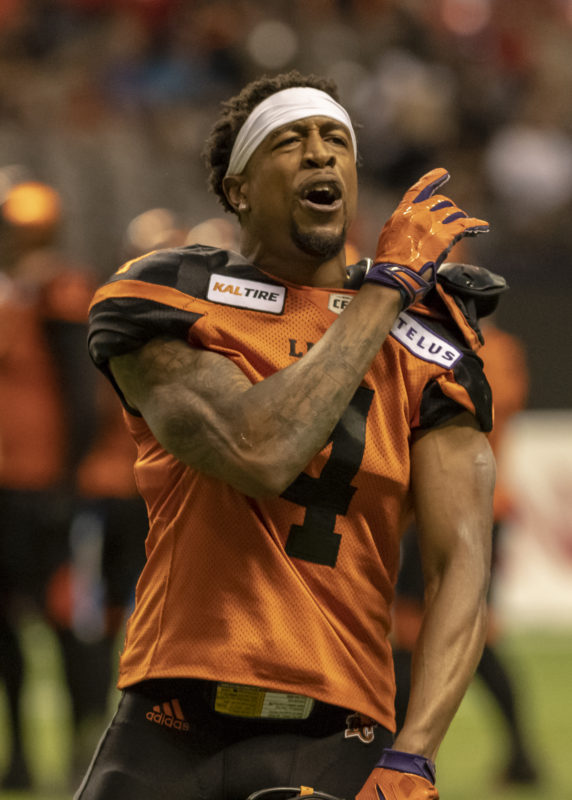 Lions defensive back Garry Peters celebrates during a victory over the Montreal Alouettes on June 16th/2018. Photo: David Friederich.

Along with his entire staff, Wally Buono has made the most of the early bye week and is preaching to his players to remain focused on one thing: starting the season 2-0.

“I haven’t really focused on that,” said Buono of the amount of former Eskimos on his roster.

“Obviously for them, there is always that extra sentimental approach to the game, but we’re all going in as B.C. Lions and after a loss in Edmonton, they’re going to be ready to play. From our point of view, we’ve had a good bye week, but it’s time now to get back to work.”

Having said that, one thing the visitors may definitely have on their side is that motivation factor. Who doesn’t want to stick it to their former club?

“I’m so excited. I’ve been looking forward to this game since I signed with B.C.,” added Peters.

“Edmonton was all I had known my whole career. I really trusted Ed and that was the main reason I came here. That and seeing a lot of my closest friends sign here.”

Make sure the pizza is ordered and the beverages are cold. It should be one great Friday night reunion.

2017 season series: the Eskimos won all three meetings, including a 37-26 result in the lone matchup at Commonwealth Stadium July 26th.

Lions last result: a 22-10 home victory over Montreal in week one.

Fan Poll
What area must the Lions focus on most in Edmonton?
Containing Mike Reilly
Vote
Winning the line of scrimmage
Vote
Sustaining drives on offence
Vote
Other
Vote
Submit View Poll Results

Although they added former Lions’ top pass rusher Alex Bazzie on day one of free agency, both Willis and Philip Hunt were key departures from an Edmonton defensive front that did a fair bit of damage last season. Linebacker Adam Konar was put on the six-game injured list after a week one victory in Winnipeg. The mindset of Jeremiah Johnson and company? Attack early and often, especially on the ground.

“That’s the goal. We want to attack, get those guys on their heels and let them know from the beginning that it’s going to be a rough one,” said Johnson.

“Once we do that and get those big five leaning on them boys, everything should be going well.”

Establishing a running game is probably one thing the offence wants to improve on from the last game.  Johnson finished with just 52 rushing yards on ten carries, while Jonathon Jennings was the team’s leading rusher, finishing with a career-high 57 on the ground. A more balanced attack could go a long way in getting that highly coveted second win.

“We want to be the same, look the same and execute the same, but we want to actually come out here and have a fast start, put some points on the board early, in the middle end at the end” added number 24.

“We’re here to just have a great game.”

Contain Mike Reilly- Edmonton’s best player will play a big role in whether or not the hometown team can bounce back against the rested Lions.

Extend Drives-  chewing up those yards and tiring out the Edmonton defence for a second straight week could be the big formula.

Eliminate Penalties- we’ve used it before, but as far as special teams go it was a job well done against the Alouettes.

Willis on his return to Edmonton: “I ain’t going to text none of them. I have no need to really talk to them. I’ve talked to the view I’ve talked to since I’ve been there, but just to be talking to them because we’re playing them, I don’t need to say anything to those guys. They know I’m ready to come to play them. It is what it is.”

Buono, when asked about his “final” trip to Commonwealth: “My last time here is going to be in November, okay? I believe that and if you don’t believe that you won’t be here in November. I’m not talking about the last time. I’ve had good some memories here and I’ve had a lot of bad memories here. Let’s put it this way: it’s early in the season, there’s a lot of work to be done and it’s not time to get sentimental.” 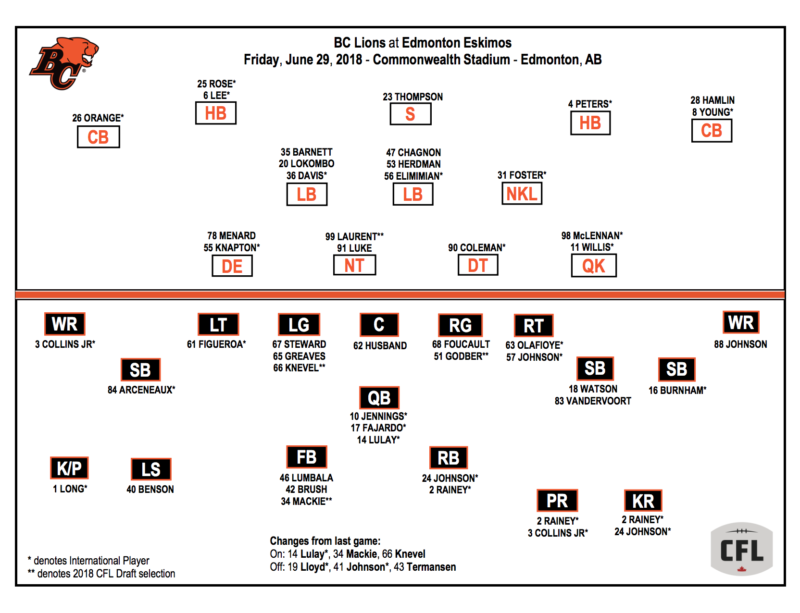 The long road back is complete: 295 days after suffering his knee injury, Travis Lulay will dress as the third-string quarterback behind Jennings and Cody Fajardo. Tip of the cap to the 34-year old for his hard work in getting back. Hunter Steward is expected to slot in at left guard after missing practice time in the middle of the week.

We hate to keep harping on it, but you get the sense we might be due. The Lions have lost five straight in Edmonton with the last victory coming on July 13th, 2013.  Travis Lulay threw touchdown passes to Andrew Harris and Emmanuel Arceneaux in that rain-soaked, 17-3 triumph. 2013 was also Hervey’s first season as GM of the Eskimos.

One more trend to reverse: the record coming off a bye. Since Buono’s return to coaching before the 2016 season they are 1-3-0 in the first game back after a break.

Stats of the week: You might want to call him ‘Red Zone Reilly.’ Through two games, the Eskimos offence has scored touchdowns on four of their five trips to the red zone. The Lions were one for two in their victory over the Alouettes. Reilly has also rushed for a CFL-leading three touchdowns, while Derrel Walker leads the league with 232 receiving yards. Chris Rainey‘s 92 punt return yards were the highest CFL total in week one. Despite playing only one game, the Lions’ defence is second in the league with five sacks.

We mentioned the weather forecast above. Can we assume it’s safe to say the Eskimos won’t be affected by a thunder and lightning delay for a third straight week to start their season?

You can listen to the action on TSN 1040, beginning with the pre-game show at 5:00 PM PT with Lowell Ullrich. Bob Marjanovich, Giulio Caravatta and sideline reporter Karen Surman bring you the action from Commonwealth Stadium at 7:00 PM PT. Viewers can watch on TSN 1, while Lions fans south of the border can tune in on ESPN 2.