Roar Report: Lions Come From 17 Down To Stun Blue Bombers 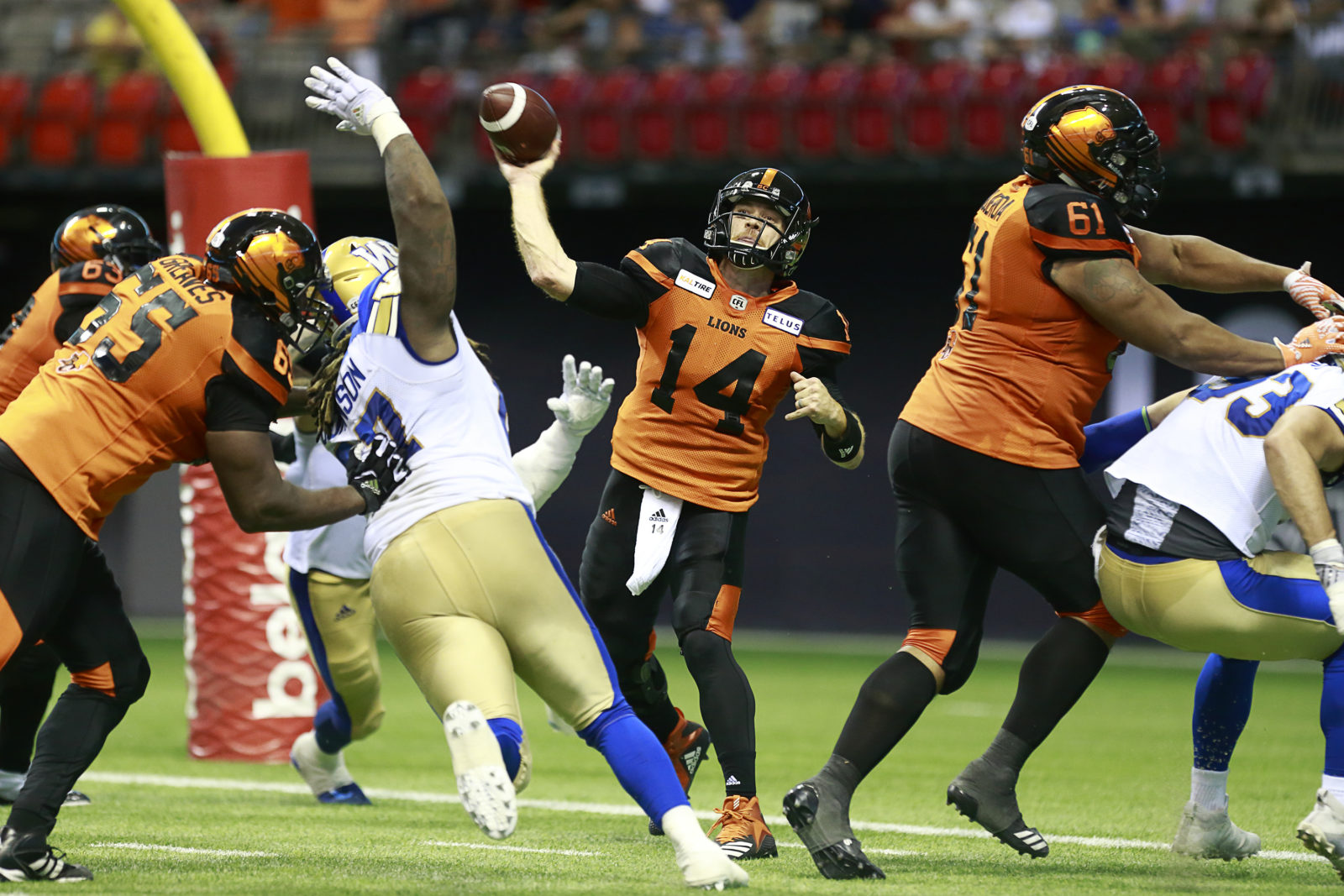 Roar Report: Lions Come From 17 Down To Stun Blue Bombers

VANCOUVER, BC - JULY 14: The Winnipeg Blue Bombers play the BC Lions in their CFL game July 14, 2018 at BC Place in Vancouver, BC. (Photo by Jeff Vinnick/BC Lions)

It had more ups and downs than the classic PNE roller coaster adjacent to old Empire Stadium. And for the BC Lions (2-2-0), it was well worth the usual wait in line.

Travis Lulay passed for 326 yards and a touchdown to Shaq Johnson to even the score and Ty Long‘s 16-yard field goal with no time left sealed the 20-17 victory over the Winnipeg Blue Bombers (2-3-0) on Saturday night. The home side overcame both a sluggish start and loss of running back Jeremiah Johnson to an ankle injury in front of a jacked up crowd at BC Place.

Trailing 17-0 at the half and seemingly running out of chances, Lulay and the offence went to work late in the third quarter. Lulay connected with Chris Rainey for a 33-yard reception that helped set up a touchdown plunge by Cody Fajardo to make it a ten-point game. After that, the defence stood its ground and put them in a position to finish the thrilling comeback.

“It was really execution at critical moments and the D buckled down and created a few turnovers,” said Lulay in a euphoric home locker room.

“Winnipeg is a good football team and they kept us off balance in the first half. Offensively, they kept us off the field, right? We felt like we were doing a few things. I had a critical mistake on the first drive of the game, the ball got away from me. We had a clock management issue and Burnham had a touchdown but Fogg made a nice play to poke it out. Two great scoring opportunities and we ended up with zero points.”

Fogg also came up big on that first miscue Lulay described. The Lions were in a position to answer Winnipeg’s opening drive touchdown before the Bombers’ defensive back took advantage of a ball that slipped out of Lulay’s hand. The end zone interception played a big role in killing some momentum early, as did the sure touchdown to Burnham right before the break.

As is usually the case when trailing big at the half, a little soul searching in the locker room went a long way in changing their fate.

“That’s the biggest thing is to not let it be fatal, because it can be. It’s a huge momentum killer” explained Lulay.

“To take a deep breath, look up and see zeroes, that was tough to not come away with points. We just had to hunker down at halftime.”

As the ageless quarterback mentioned, this comeback was made possible by a gutsy defensive effort. After stopping Matt Nichols and company on a pair of 3rd and short situations, including a gamble from the Lions seven-yard line that was stuffed by Odell Willis, an interception by Anthony Orange with 1:39 to go proved to be the final turning point before Long’s winning kick. Perhaps it serves as a little nice karma for a unit that had taken its share of criticism these last couple of weeks.

“Coming off those two losses, we wanted to come in here and show we are a better football team than that. Shutting them out in the second half is a big testament to our coaching staff putting us in the right position so we can get that W.”

It’s never too early to discuss statement victories and potential defining moments of a season. This could very well have been one of those nights.

“Those wins at home and protecting our turf just kind of builds momentum for the next game. We’re just excited to get everything rolling now.’

As Orange and the other newcomers brought in by GM Ed Hervey continue to establish chemistry, a win like this will also bring them together faster. The veteran Lulay agrees with that notion.

“It’s huge for us because we’re still early in the season, we stay right in the hunt with this win tonight,  a bunch of teams have two losses in the west, so we’re just right in the thick of it,” added the quarterback.

“We know we can be a lot better. It should be a great confidence builder. I tell you what, it feels a heck of a lot better to correct mistakes after a win than a loss.”

Your Lions return to practice on Monday ahead of Friday’s road tilt with the Ottawa REDBLACKS. It is a 4:30 kickoff from TD Place Stadium. 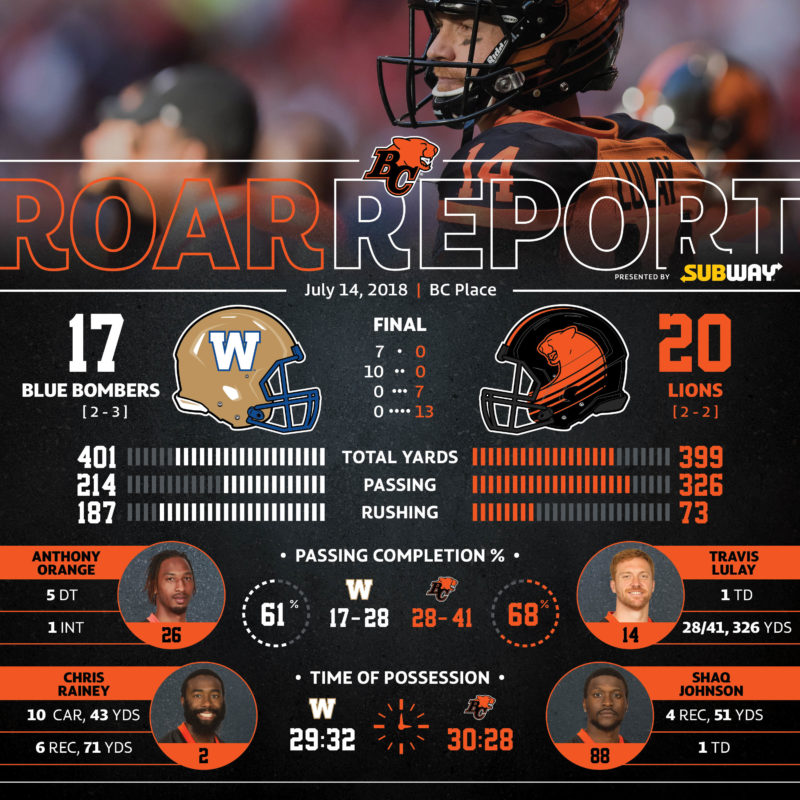 One thing Wally Buono might not miss in retirement is these nerve-racking finishes. He has been on both ends of several of them over his illustrious career. A couple of quotes from his post-game press conference.

On Lulay’s Triumphant Return- “Not only was I happy for him, I think the whole organization (and) the fans (were), you heard the ovation he got. The guy worked hard as he always has, he’s always well prepared and he ran the offence very efficiently. Hopefully, we start connecting on some of those throws and we start the win will be a lot more explosive.”

On Rainey’s Production- “Chris is always clamouring at me about a bigger role in the offence. We’re trying to do that, but we’re also trying to make sure our return game doesn’t suffer because of wear and tear. Tonight he didn’t have any choice and obviously, he was outstanding.”

0- the number of second half points given up in two home games this season.

5- turnovers for the Lions defence: the two on downs and interceptions by Orange, TJ Lee and Winston Rose.

71- the total of receiving yards for both Rainey and Bryan Burnham to lead the home side this evening.

60- the number of Rainey’s receiving yards that came after the catch.

399- the total offence for the Lions, their most complete effort so far on this young season.

300- total career receptions for Cory Watson after he hauled in a pair of passes in this one.

10.7- the average yards per carry by Andrew Harris, who finished with 139 yards on the ground and once again made life difficult at times for the Leos defensive front.

So are any observers still doubting if Lulay is ready? He would admit the effort wasn’t perfect: if he connects on a couple deep balls to Ricky Collins Jr. and Emmanuel Arceneaux, he may have flirted with 500 yards, but overall you chalk it up as a passing grade for the new/old starting QB.

Rainey truly is remarkable at rising to the occasion with an increased workload. His big-play ability was a huge catalyst for the offence as they looked to turn the corner and chip away.

We’re guessing the Winnipeg call-in shows had some interesting input on said decision to go for it on that third down inside the Lions ten. Risk reward. A chip shot field goal and a ten-point lead might have been salt in the wound at that point. You also can’t underestimate the first 3rd down stop that occurred from inside the one-yard line when Solomon Elimimian got to Bombers backup QB Chris Streveler. Another big-time play by a big-time player.

Speaking of huge plays. What can you say about Burnham’s amazing 38-yard catch to set up the winning field goal? Bombers head coach Mike O’Shea might disagree after an unsuccessful challenge for offensive pass interference.