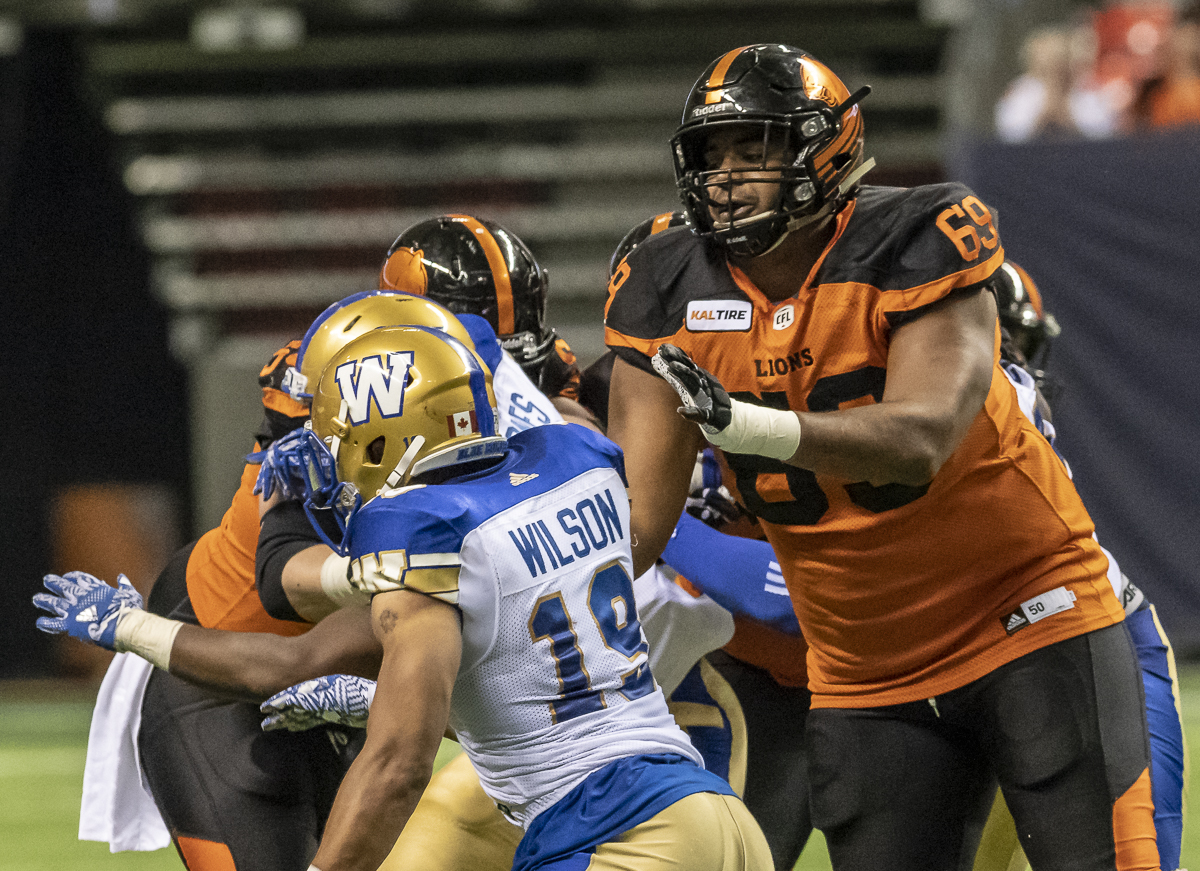 On the field, he is a 6’8, 325- pound wrecking ball. Off of it, his polite and articulate demeanour suggests he should consider running for political office once his playing days are over. Besides protecting the quarterback and wreaking havoc on opposing defensive linemen, David Knevel has gotten the most joy out of helping people. That was evident during his time at the University of Nebraska when he joined a large contingent helping out the cleanup efforts in the nearby town of Pilger that was devastated by a category five tornado in 2014. For the community-minded Knevel, it was an eye-opening experience.

“We went there to help clean up a lot of the debris and it was just amazing to see a community come together and have a lot of people from Nebraska and neighbouring states come in and help,” recalled the Lions third-round draft pick from this year.

“That was definitely my most memorable and rewarding experience.”

Knevel knew from the time he got to Nebraska that he wanted to make a difference outside of football.

“The school had a life skills program and folks there were adamant at advising us to do that,” explained Knevel.

“My roommate and jumped on that opportunity and did as much as we could. If you did a certain amount of volunteer work you got on the life skills team and I exceeded that every year. That was just fun.”

Whether it’s the Make-A-Wish Foundation, Souper Bowl of Caring or Uplifting Athletes, Knevel would always find a way to make time for charity. The History Major was also a three-time Nebraska Honor Roll selection. Playing for the Cornhuskers program also prepared him for the bright lights of pro football. 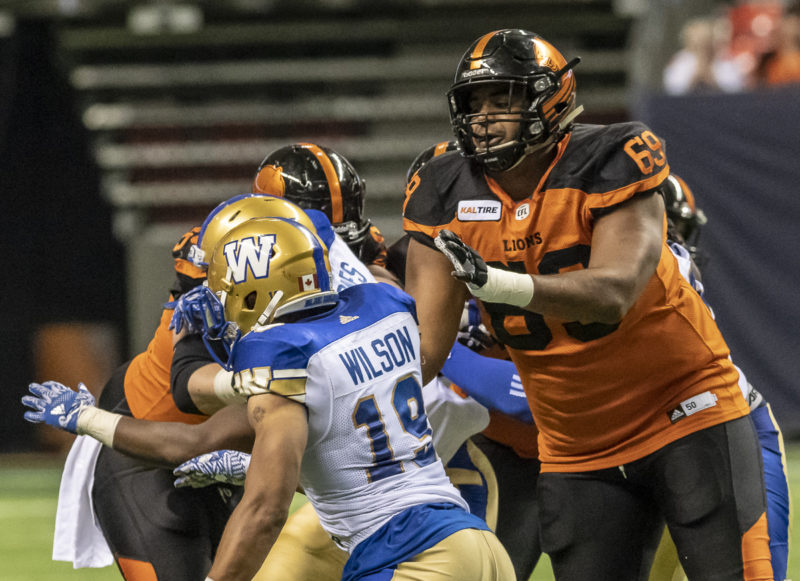 David Knevel in action against the Winnipeg Blue Bombers on in pre-season action on June 8th, 2018. Photo: David Friederich.

“I’ll tell you a quick story, ” started Knevel when asked about playing at such a big powerhouse.

“It wasn’t even game day, it was spring football. They told me there would be 60,000 people at this spring game and I was just like ‘ok, whatever.’ We show up there just like a normal day and I go in to get changed, the normal routine. I walk out to the practice field and I can see through a window and there were people walking. I still didn’t think there was going to be 60,000 people. I go out there for the pre-game routine and sure enough, there were about 50,000 people for the pre-game and then 60,000 for the game itself. Zero to 100 just like that. It was probably the liveliest experience I had ever been a part of and that was just a spring game. Then actual game days you get 90,000 people, it’s all colour coordinated, all that stuff. It’s ridiculous.”

After being scouted by Geroy Simon at his Nebraska pro day, the native of Brantford, Ontario confirmed his place near the top of coveted offensive linemen on the B.C. Lions’ draft board. Since being selected 21st overall, he hasn’t stopped improving his techniques. That came to light when he was forced to replace Jovan Olafioye at right tackle early in the loss at Ottawa on July 20th.

“First off, I made sure Big O was good and told him I had his back,” explained Knevel.

“Personally, my whole mindset was that I was just excited to go out and play meaningful snaps in the CFL. I just wanted to go out there, do what I do and have fun.”

He also credits his time at training camp in Kamloops for playing a big role in his early development.

“The biggest thing for me in camp was learning how to play guard. That was the big adjustment,” recalled Knevel.

“Then when I played a little bit of tackle (in Ottawa) it felt natural. Learning to play guard has helped me at the tackle position, made my hands better and made me withstand a lot of strength rushes. Overall as a player, I think I grew a lot by the end of camp. The coaching helped me a lot too. (Offensive line coach)Dan (Dorazio) does well with a lot of the details.” 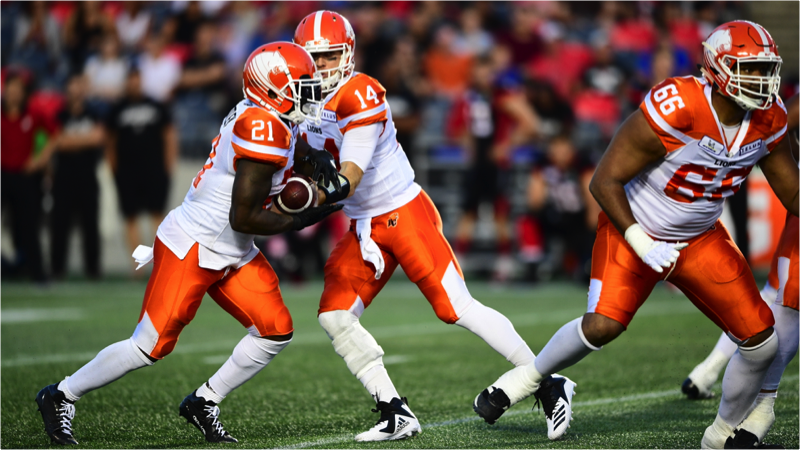 The bread and butter of any CFL team success depend heavily on the quality of your Canadian starters. That’s especially true if you can find a couple of those gems on the offensive line. The thought of Knevel and first round selection Peter Godber as future fixtures on the right side should have the organization and its fans oozing with anticipation. For now, the fact they can step in and play is a huge bonus in year one.

“I think you can say this: he had a great week of practice because he practised the whole week for Jovan and that was a blessing for him,” said head coach Wally Buono.

“Then when he went into the game what he did in practice he did in the game. When you see a young guy like that step into a tough position, because the position of offensive tackle is difficult, I thought he handled himself very very well and obviously that excited a lot of people.”

Always one to credit those around him, the rookie says he wouldn’t have gone anywhere without the support of his parents, Michelle Knevel and Mark Miller.

“They helped my brother and me out from a young age. We all had dreams to go down south and you can’t do that unless your parents help you out, take you to camps and all of that,” said Knevel.

And should he get the shoulder tap against the undefeated Stampeders on Saturday night, you know he’ll be ready. That’s why you practice with the intensity Buono talked about above.

“That’s the goal, to get better every day no matter what sport it is,” added Knevel.

“The people you’re competing against, you want to make them better and hope you get better as a team because of that.”