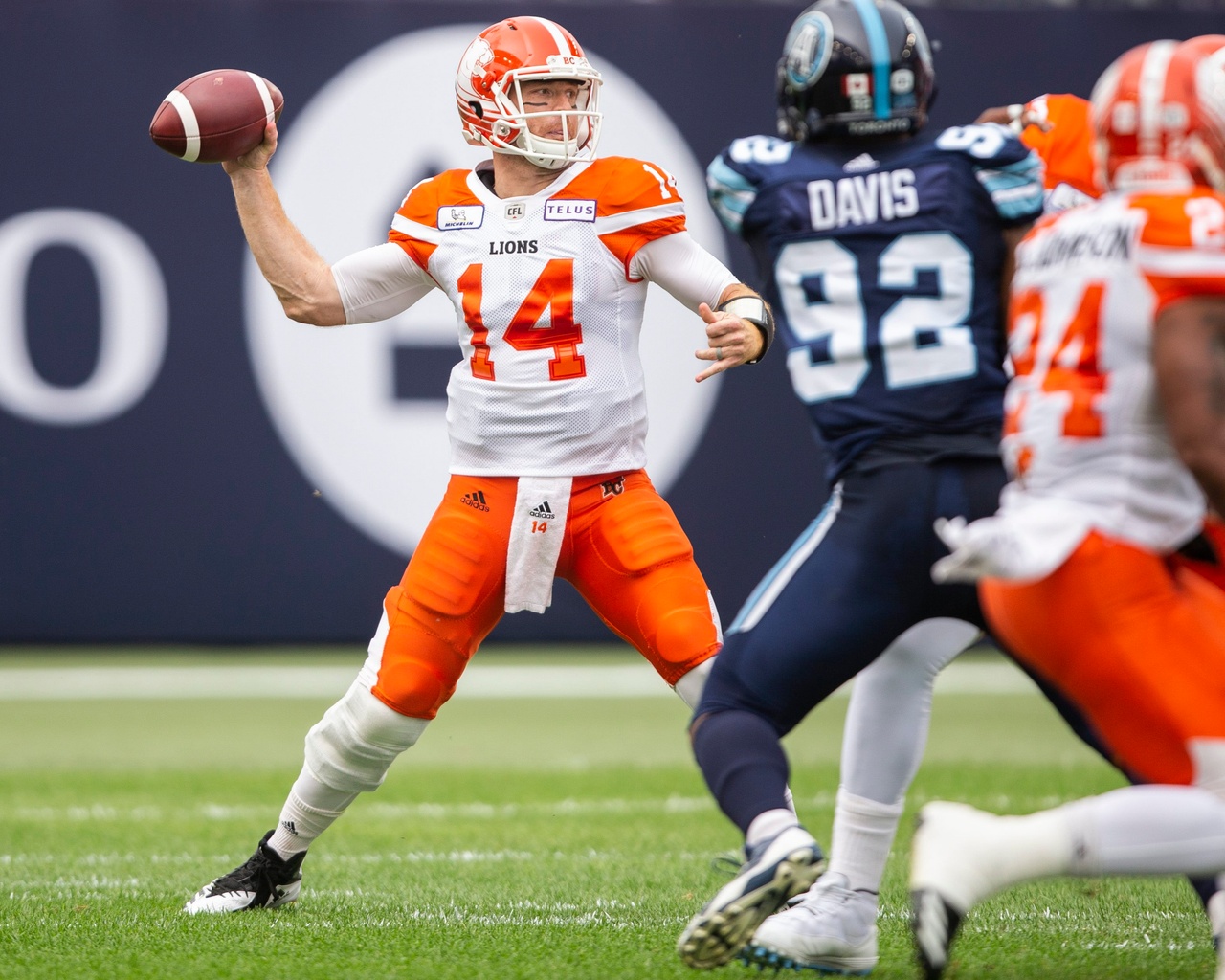 It was another rollercoaster affair; only your BC Lions (3-5-0) would come up just short of a second straight win. McLeod Bethel-Thompson and James Wilder Jr. would see to that. Wilder Jr. finished with 130 all-purpose yards and the quarterback made plays when he had to as the hometown Toronto Argonauts (3-5-0) escaped with a 24-23 victory in front of a raucous crowd at BMO Field.

After taking a seven-point lead into halftime, the offence couldn’t keep it consistent. Still, they were in a position to potentially kick a game-winning field goal in the dying seconds before Manny Arceneaux’s lost fumble did them in. Number 84 owned the mistake afterword.

“It couldn’t have come at a worse time in the game. Gotta be high and tight. It’s basic fundamentals.”

Perhaps it served as a bit of poetic justice for the man who recovered it. Earlier in the drive, Marcus Ball appeared to have a game-sealing interception before fumbling into the hands of Chris Rainey. The Lions were granted new life and marched from their own 22 into Argonaut territory before Arceneaux’s drop. Wally Buono wasn’t pointing the finger at one particular play.

“They converted, they ran the ball, we didn’t play the run as well and you’ve got to give their quarterback credit,” said the head coach.

“We knew it was going to be a very tough, very close game. When you look at it, as I said, they out-physical us and they out-competed (us).”

The Lions trailed 6-3 after the opening quarter before Jeremiah Johnson and Bryan Burnham had second quarter touchdowns to give them a 17-10 lead going into the break.

After that, all they could muster up was a pair of Ty Long field goals.

James Franklin‘s one-yard plunge with 12:14 remaining proved to be the winning points.

“It was mistake after mistake. We all took our part in it,” added Arceneaux.

“We take one step forward and two steps back. It’s just about finding that consistency, man. We just have the meltdowns that tend to come at the wrong game.”

Travis Lulay finished the evening with 285 yards passing while Johnson had his most productive outing of the season with 117 all-purpose yards.

After silencing some of those doubters in last week’s big comeback over the Eskimos, Otha Foster III and the defence will now have to go back to the drawing board.

“It wasn’t because we didn’t execute. They made plays when they had to,” explained Foster.

“That’s the most frustrating thing: after a big win last week to come all the way east and lose by one point. That’s tough. But like we’ve done every other time this season, all we can do is get back in the film room, have a good week in practice and look to bounce back in front of our great fans.”

Buono couldn’t quite put a finger on why his group can’t string together back to back victories.

“If I knew, I would fix it,” added the CFL all-time wins leader.

Penalties were once again a factor in defeat, including a couple of costly time count violations and procedure calls that forced Lulay and the offence into 1st or 2nd and long situations.

“These are all things that come back and disrupt your rhythm, disrupt your momentum and when you look at why you lose, they contribute to that.”

Next up for the Lions is a home date with the Saskatchewan Roughriders on Saturday, August 25th at 7:00 PM. 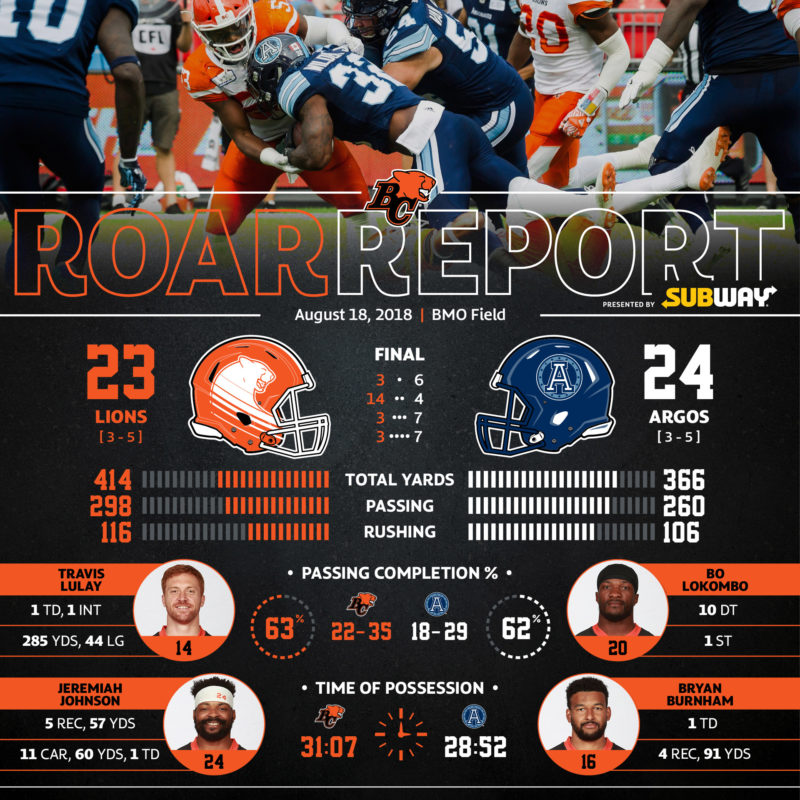 5.1- the average yards per carry for Wilder Jr., like Johnson, who was a force in both the ground and pass game.

0- the number of two and outs by the Argos’ offence before the 4th quarter. They would end up with three, including one toward the end where they were running out the clock.

414- the season-high total of offensive yards for the Lions.

91- the game-high total of receiving yards for Burnham.

31:08– the Lions’ time of possession, nearly three minutes better than the Argos.

4- the total number of Lions turnovers.

This one will sting, no doubt about it. It started off promising as Lulay engineered a 12-play, 59- yard drive that killed over six minutes to start the game. They would have to settle for a field goal. A major to start things off would have changed the outlook. That lack of finishing has been evident in each of the losses.

We talked in our game preview about Wilder Jr.’s capability as a difference maker. The Lions defence didn’t have much of an answer for the speedster in this one.

We always preach it, yes. But pass protection is always key. Lulay had plenty of time on that opening drive we spoke of and time in the pocket was a big reason Bethel-Thompson was able to come up big for the second victory in as many CFL starts. Establishing a bigger pass rush will be a big talking point this week.

The Lions return home to face the Saskatchewan Roughriders next Saturday, August 25th at 7:00 PM. The 3-4 Riders play host to the 7-0 Calgary Stampeders this Sunday evening.