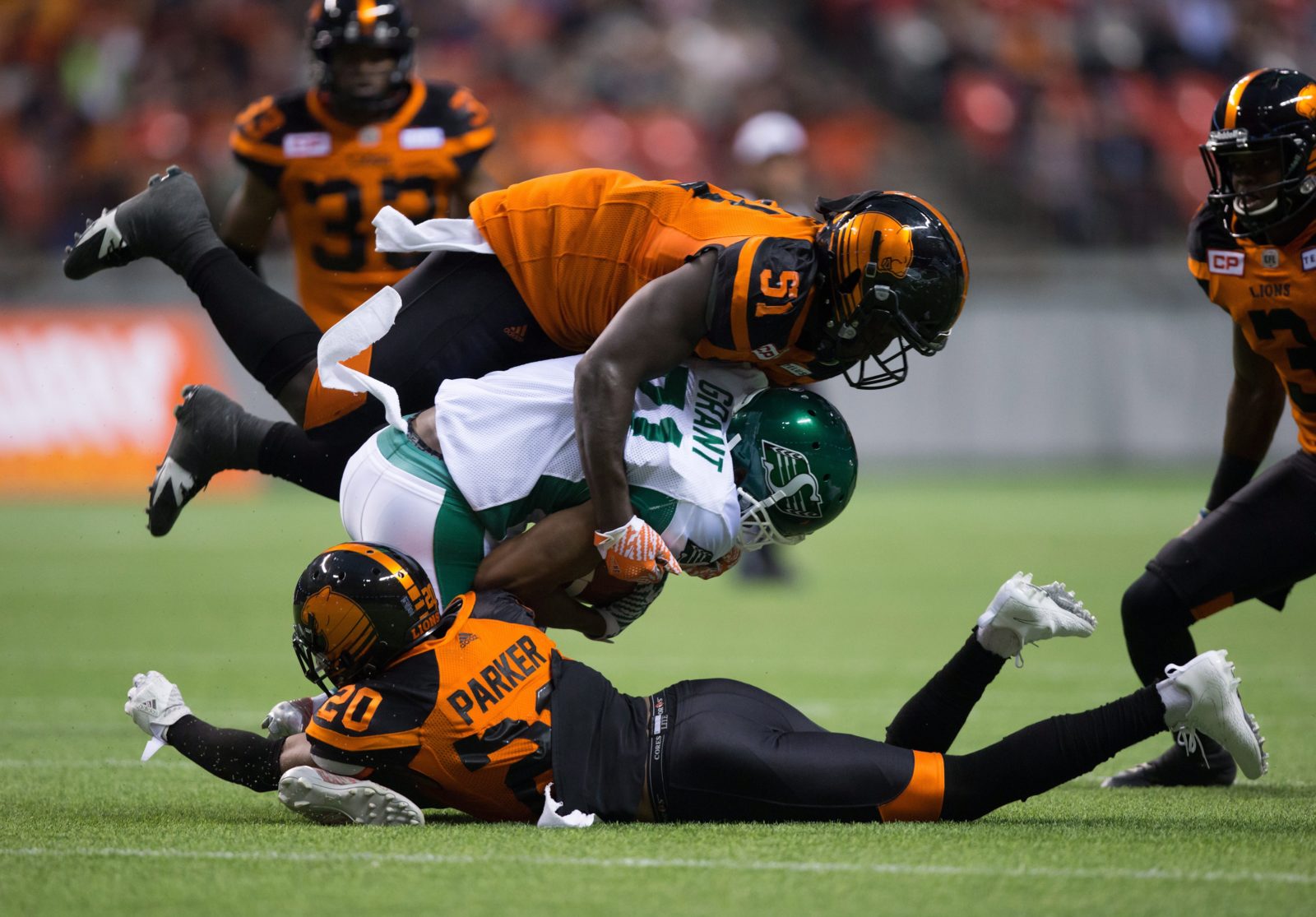 Saskatchewan Roughriders' Myke Tavarres, centre, is tackled by B.C. Lions' Micah Awe, top, and Keynan Parker during the second half of a pre-season CFL football game in Vancouver, B.C., on Friday, June 16, 2017. THE CANADIAN PRESS/Darryl Dyck

Micah Awe is angry. And that can mean nothing but good news for a Lions defence in need of some help and potentially bad news for every one of their upcoming opponents. The hard-hitting, ferocious linebacker was back at the facility on Tuesday and after passing his physical in the morning, took part in some post-practice conditioning with the rest of his new/old teammates. After he admittedly wasn’t given much of a chance in his short-lived tryout with the New York Jets, Awe is ready to prove he can get back to being the dominant force he showed glimpses of in his rookie CFL season.

“I’m coming out here to prove not just them wrong, but just a lot of my naysayers saying I’m too ‘blah blah blah.’ I’ll just show you. You just got to keep proving yourself over and over again.”

Awe indeed took a winding road back to the lower mainland. Prior to his release from the Lions and subsequent NFL tryout, the Petroleum Engineering Major from Texas Tech spent much of the last offseason working on a project in a Chicago that was funded by the United States Department of Energy. With the thought of playing football at some point in 2018 very much the priority, Awe put the energy sector on old, killing most of his time between April and now working as both an Uber driver and Amazon delivery man.

“I did a couple of fast walks delivering stuff in the heat in Chicago,” chuckled Awe.

“But that can never prepare you for the CFL.”

Never one to shy away from a conversation, he now says those jobs proved to be memorable.

“It’s interesting. To be honest, I just met a lot of nice people,” said Awe of his offseason experience.

“They asked me questions like ‘oh, you played in the CFL?’ A lot of people don’t know where the CFL or Vancouver is, but I educated people and that’s what you need to do. Doing all that on the side, to say the least, it’s humbling. It lets you realize what you really have with football.  That’s why I’m back. I couldn’t commit to an engineering job because no engineering company wants to hear you can be gone any second. I’m just out here to try and help others.”

Well we know there is not any Uber in British Columbia, so it won’t be hard for him to focus on getting back to what he accomplished a year ago. Awe emerged as one of the unknown surprises when 2017 training camp broke in Kamloops. After taking over the starting outside linebacker spot that was previously held by one Adam Bighill, Awe finished his first CFL campaign with 54 defensive tackles, a pair of pass knockdowns and a forced fumble. He now admits the transition to the Canadian game was a lot harder than he first envisioned.

“My most honest experience about the CFL is the first kickoff in pre-season against Calgary (last season), I got smacked in the mouth,” recalled Awe. 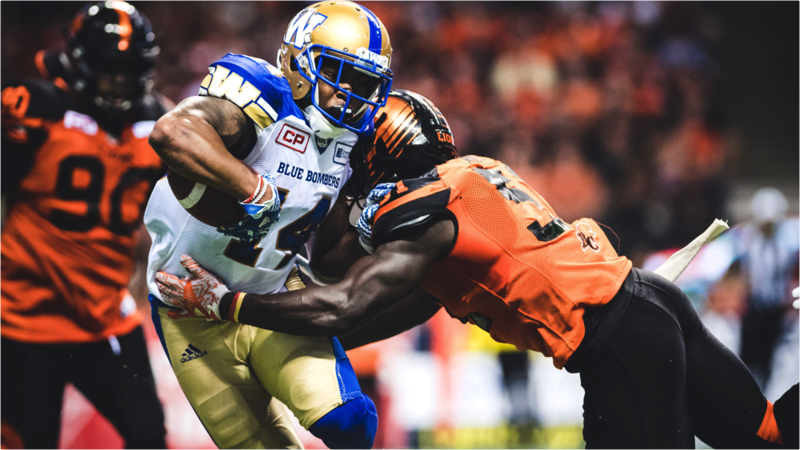 It’s no secret he also re-joins a defence that can use a shot in the arm after allowing the Toronto Argonauts to convert on more than a few second and long situations and not forcing a two and out until the fourth quarter of Saturday’s one-point defeat. Awe doesn’t think it needs to be a hard fix.

“Just go down the list and look at the names that are here: whether they needed me or not, we already have talent here. I don’t think it’s a matter of talent; it’s a matter of mindset and going from the team that says ‘we can win games’ to ‘we’re going to win point blank.’ We have to have that swag. I think that’s what we’re missing. We’re winning. Point blank. Business and business.”

And you can bet it will last longer than his attempt to make it down south.

“To be honest, it’s a business. I understand that,” said the linebacker.

“I committed half a year to a year to be on the Jets and they cut me on the third day of the draft. Non-performance obviously, but it’s part of my journey, right?

The journey has seen many twists and turns, but you can sense both Awe and the 2018 BC Lions are better off for it. The offence will have a whole new challenge on their hands for Thursday’s practice.