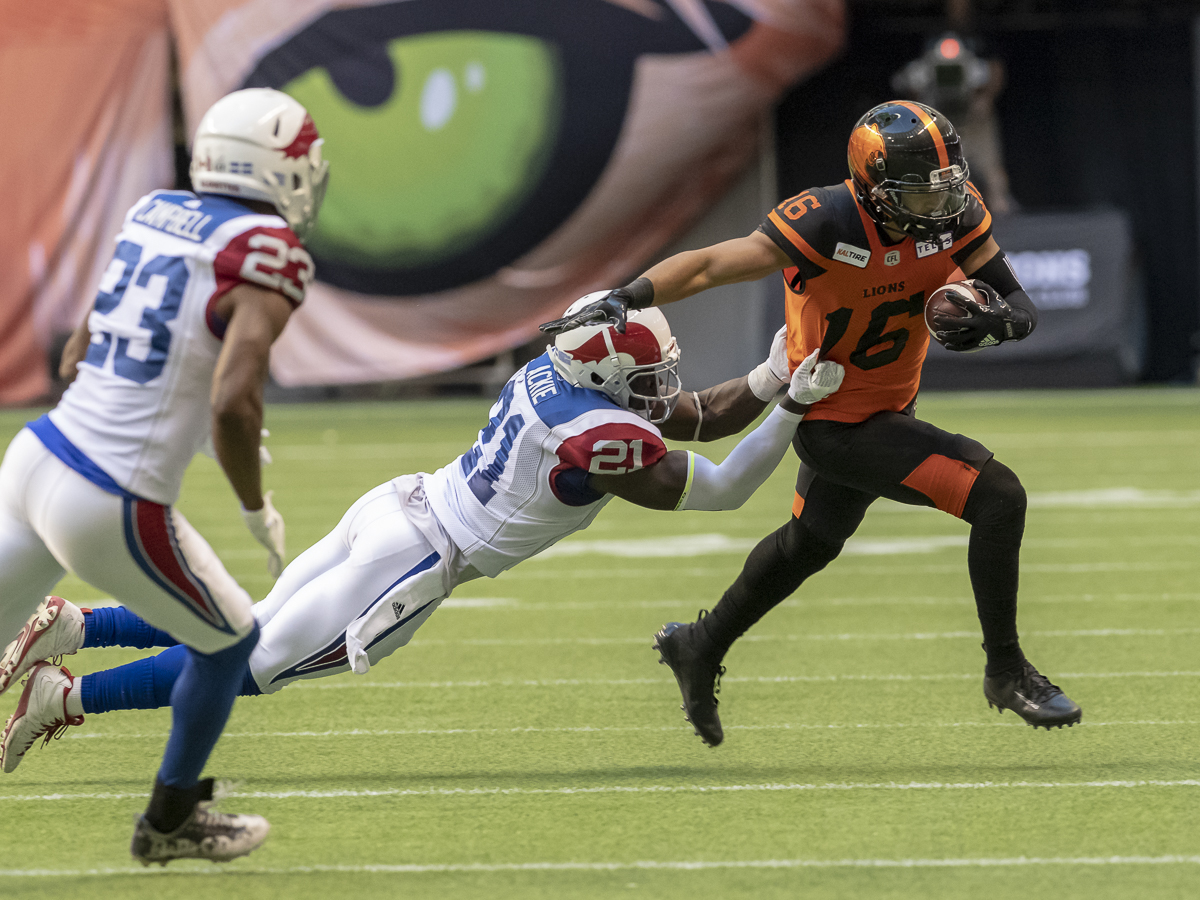 His maiden voyage as a CFL starter might indicate some choppy waters. Yet if you judge it by his demeanour, 2018 first round pick Peter Godber is more than ready to captain the project. Forced into the starting centre role after veteran Cody Husband went down with a season-ending leg injury on the opening play from scrimmage last week, the pride of Rice University is ready to show what he can do as his Lions squad searches for its first road victory in almost a full calendar year in Montreal on Friday night (4:30 PM/TSN/RDS/TSN 1040).

“I was the backup centre at Rice for my last two years there. In practice, I’d go ones with the guards and twos with the centre so it’s nothing really new to me. Football is football,” said Godber.

It was at Rice where Godber took some key pointers from his offensive line coach Ronnie Vinklarek, who had also spent time as a coach with Edmonton and Winnipeg.

“He pretty much pulled me aside my sophomore year and was like ‘you’re going to be playing professional football whether it’s in the NFL or CFL. You better learn how to snap.’ I’m grateful he did that for me. It has definitely prepared me for this game coming up. I’m excited to go.”

Having a mentor like Husband to learn from has also groomed him well for this key assignment.

“He kind of pulled me under his week,” explained the rookie.

“I sat next to him in meetings and he really made sure to show me pretty much how to play the position in this league, what calls to make and explained to me why to make those calls. I was grateful to have learned from him all season. I’m excited and ready to play some football.”

As for the assignment itself, Godber expects something resembling a three-hour streetfight. Despite what the Alouettes’ record indicates, they have been stingy on defence at times this season, especially in a 22-10 loss at BC Place to open the regular season.

“They like to come downhill and hit you,” said Godber of the Alouettes defence led by coordinator Rich Stubler.

“They have some great d-linemen and great linebackers. You look at the stats and see their two linebackers (Chris) Ackie and Henoc Muamba, they’re both top five in the league in tackles and that’s not just a coincidence. Their both great players and they have a great defence all around. It’s going to be a challenge for us, but we’re excited to go play some football.”

Through the CFL draft and free agency, this revamped Lions offensive line has been a bit nastier and intriguing so far. Godber in the middle will be interesting to monitor as will this matchup as a whole. Along with their struggles away from home. the Lions have failed to generate back-to-back victories of any kind since July 15th and July 21st of 2017. They know that must change quickly in order to take advantage of this massive opportunity they have in front of them. Travis Lulay and company enter this week just two points back of the idol Winnipeg Blue Bombers for a crossover playoff spot with two games in hand. The Lions’ starting quarterback is 100 per cent healthy after leaving in the second quarter of last week’s win over Ottawa to go through concussion protocol.

Lions latest result: a 26-14 win over Ottawa on September 7th.

Alouettes latest result: a 21-11 win over Ottawa on August 31st.

Last meeting: Jonathon Jennings and the Lions overcame a slow start to take down Montreal 22-10 in the regular season opener on June 16th.

2018 W/L record: 1-2-0. Statistics: 54/84 for 762 yards, one touchdown and one four interceptions. Pipkin has also been a threat on the ground with 19 carries for 130 yards and four touchdowns. Two of those scores came in a victory over Toronto on August 24th.

WR DeVier Posey-  last year’s Grey Cup MVP (pictured below) brings a pure game-breaking ability to a Lions’ offence that has lacked one of those for most of this season. With a full week of practice under his belt after arriving in Vancouver on Sunday, Posey will look to turn heads in his orange debut.

KR/RB- Chris Rainey– the rain man is back in action after sitting out in favour of Travon Van last week. Always the ultimate competitor, you can bet Rainey will approach this game with a chip on his shoulder. With 1525 combined yards, he trails only Ottawa’s Dionte Spencer for the league lead.

LB Bo Lokombo– fresh off recording his first career interception, Lokombo has continued to prove his worth as a reliable cog in the defensive will. The pride of Abbotsford will be counted on to contain Pipkin’s mobility out of the pocket. 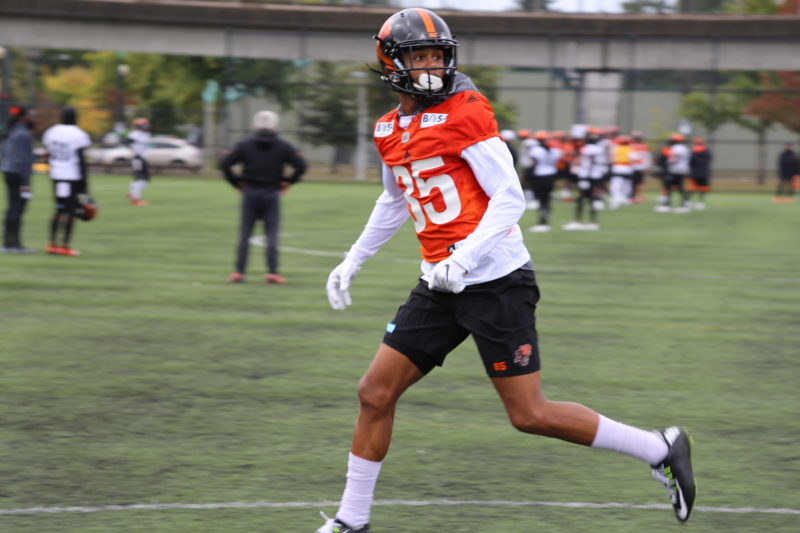 “The week of prep has been good. Obviously with Posey coming in and Peter Godber at centre I think everybody’s focused really well. We’ve had three good days of preparation and I think everybody understands the position that we’re in. This is a team that, if we’re going to crossover, we have to get some separation (from). They’re going to be tough, they’ve won their last two games and obviously on the road, it’s been tough for us.”- Wally Buono on the stakes against Montreal.

“I haven’t been thinking about that because that’s not an issue for me. I’ve been here before; as a player, we won the Grey Cup as a head coach at the Big O ( Olympic Stadium), as a coach I won a Grey Cup in 2001 at the Big O too. Those are memorable things that aren’t going to ever be matched. Coming here for your last game is just another game, but for me what’s more important is keeping the team focused and making sure that we do everything possible to win a big game.”- Buono not feeling nostalgic about the final game in his hometown.

“He looks like Cam Newton a little bit. He can throw the ball, he can stay in the bucket, but he has the ability to run. We’re going to have to contain him, play smart in second and long. keep him in the pocket, give him pressure and force him to throw the ball. Perfect passes.”- Defensive lineman Junior Luke on facing Pipkin.

Stats of the week: Looks can be deceiving, and trust us, this Lions squad knows it can ill afford to take anyone lightly at this point, but the Alouettes enter this contest dead last in a few key offensive categories including points scored ( 178), touchdowns (17), first downs (184), net offence (3,008 yards) and total plays from scrimmage (543). As we mentioned though, Pipkin has shown to be very capable of extending plays with his feet. Mark Washington’s defence has shown flashes of brilliance in the team’s four wins. This presents yet another chance to prove they are in the upper echelon.

Pipkin’s favourite target since taking over as the starter is B.J. Cunningham. The veteran receiver has jumped from 39 yards per game to 91 yards per game.

A couple of weeks ago we told you the Lions’ offence was lacking big plays. A quick check of those stats reveals they are now tied with Edmonton for fourth in the CFL with 31. The league defines ‘big plays’ as any pass that goes for 30 or more yards or any rush that goes for 20 or more yards.

The Jeremiah Johnson factor. In the six times this season the tailback has carried the ball ten or more times he has a touchdown in five of them and averaged 5.6 yards per carry.

Yes, we’ve talked at length about how well Jeff Reinebold has moulded this special teams unit. Here is more proof: the Lions have committed the fewest special teams penalties (15) so far this season, six less than Calgary who is second on that list.

Courtesy CFL stats man Steve Daniel: barring a return trip in the Eastern Division playoffs, this marks Buono’s final football visit to the city he grew up in. Combining his totals as a player and coach, Buono has a record of 76-58-5 in games played at Montreal, a winning percentage of .565.

TSN 1040 has you covered, beginning with the pre-game show at 2:30 PM with Lowell Ullrich. Bob Marjanovich, Giulio Caravatta and sideline reporter Karen Surman bring you the action at 4:30 PM. Viewers can watch on TSN and Lions fans south of the border can stream the action on ESPN+ and those in the UK and Ireland can watch on BT Sport. Fans in the lower mainland can head to the downtown Vancouver Shark Club for our road game viewing party. The action there kicks off at 4:00. More info HERE! 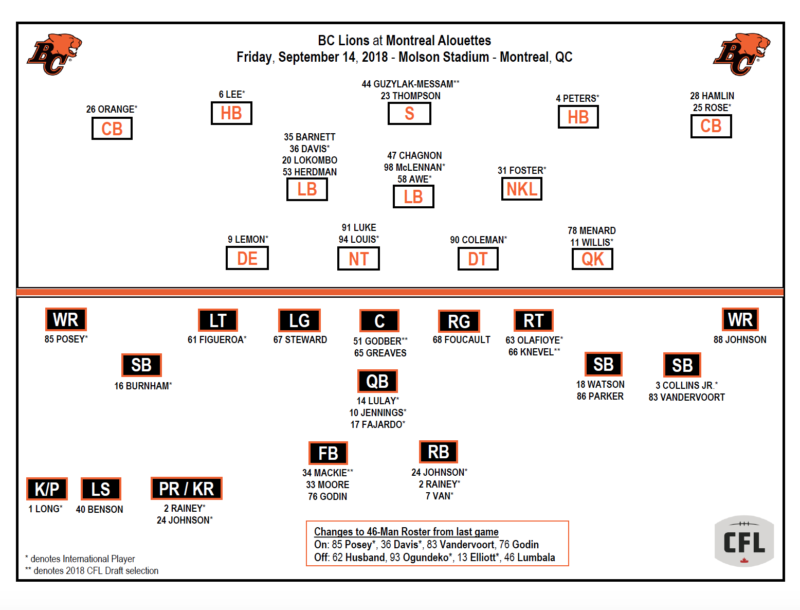