The Story Behind The Shot 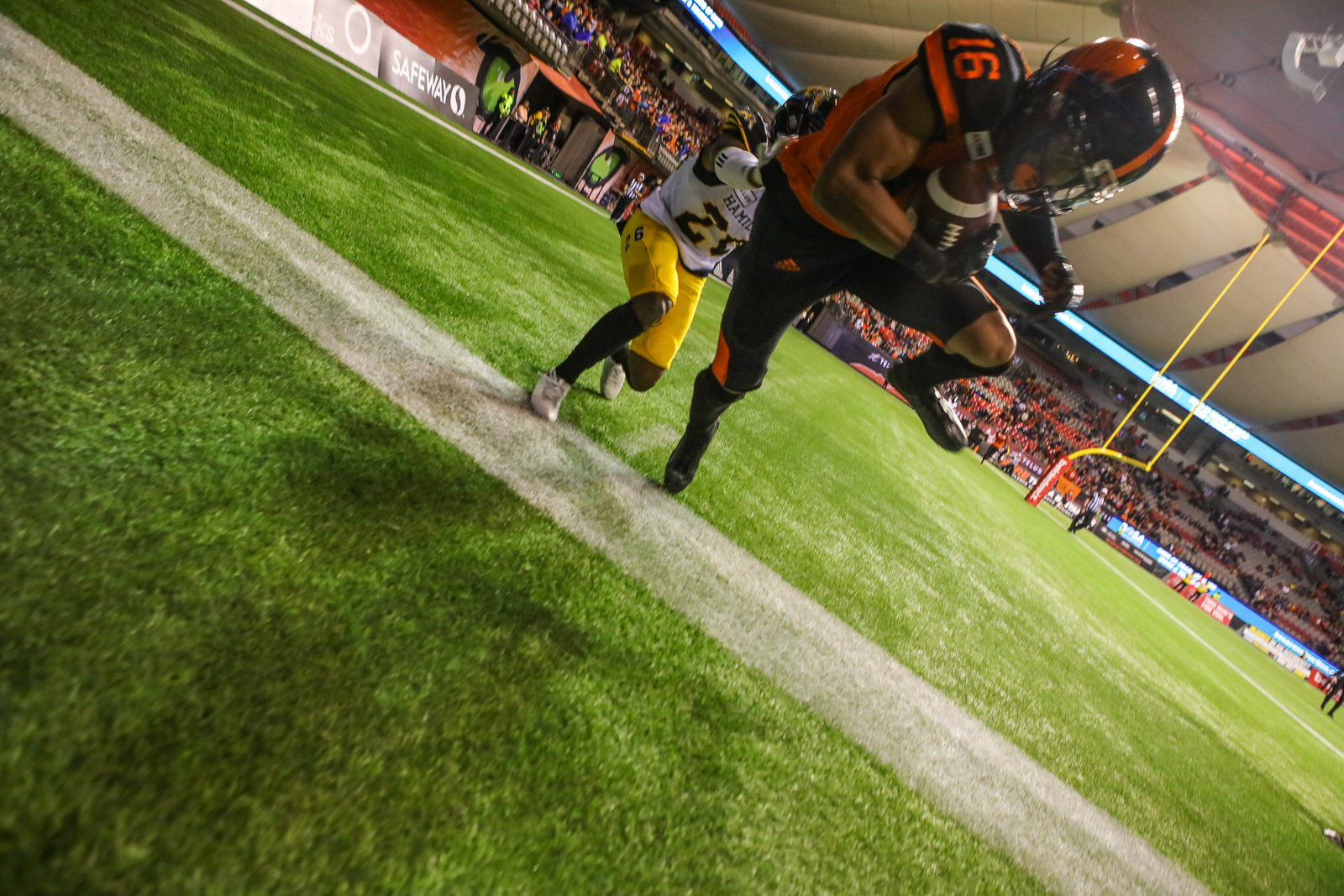 The Story Behind The Shot

If you attended the thrilling comeback win over the Hamilton Tiger-Cats in the fall of 2018, it’s a game you likely will never forget. Simply put, the CFL classic had it all. An amazing comeback, heart-stopping moments in overtime and the type of photo that will only get captured maybe once in an entire season. 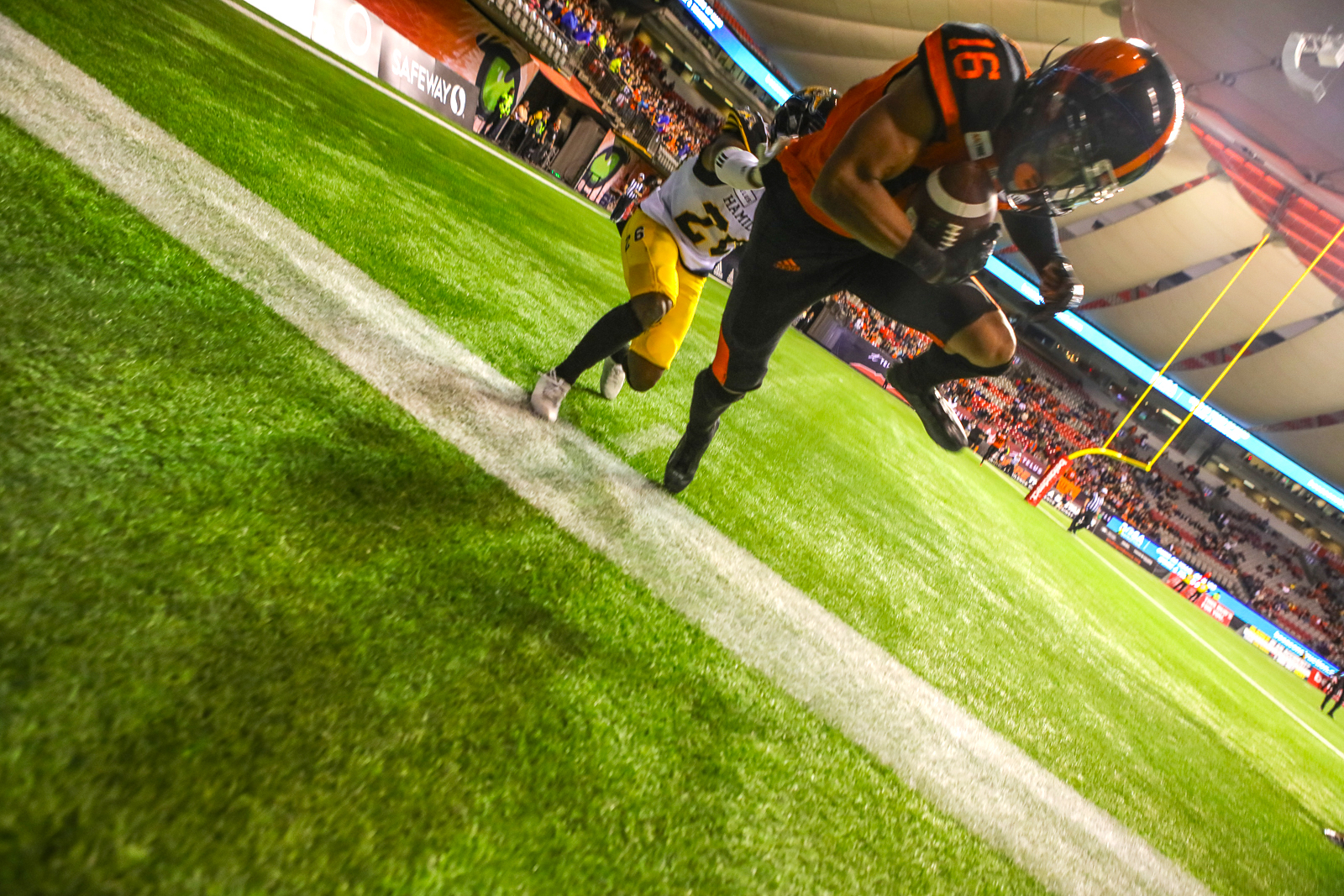 For Paul Yates, his phone rang off the hook for a few weeks after that game. A long-time team photographer for the football club, Yates received plenty of national exposure for capturing Bryan Burnham’s highlight-reel two-point convert that sent the game into overtime- despite the fact Burnham ran him over, he still got the money shot. No doubt capturing images in a fast-paced sport like football comes with the odd “workplace hazard.”

Fresh off a visit to his home studio from Global BC Sports Reporter Jay Janower, like we said, he’s a popular guy these days, Yates took a few moments to speak with BCLions.com.

“The key to staying focused is to not bail and hang in there for as long as you can,” he says.

“When your natural reaction, from the smart part of your brain, says ‘get the hell out of there! Go!’ What are you going to do? Leave? No, it’s too late. Then you try and make it look like you do this all the time, that your knee and elbow don’t hurt and that this is totally normal.” 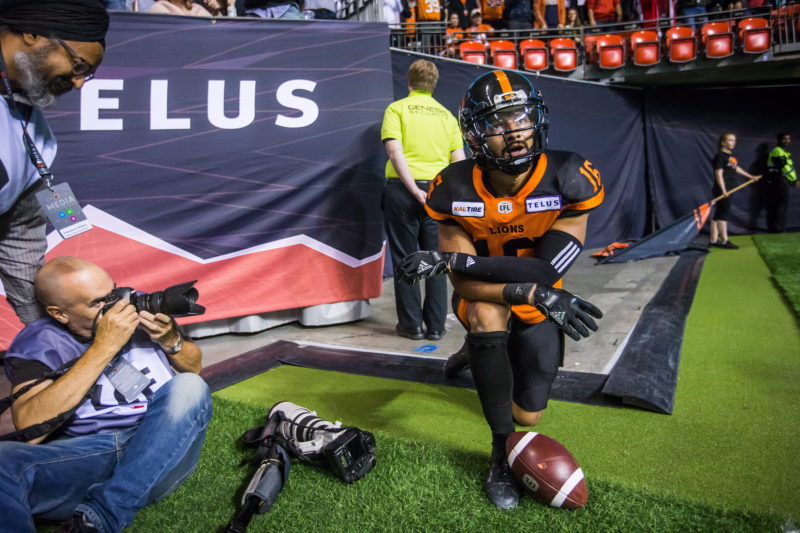 And perhaps it was fitting he captured such an incredible photo after shelling out a mere $16,630 for a brand new Canon lens. Call it photographer’s justice.

Over the years, Yates has learned the hard way the longer you stay in the ‘line of fire,’ the bigger the payoff will be once he checks his memory cards. Saturday night being the prime example.

“When I first started shooting Lions games in 2008 I would bail early. Like, really early. As soon as the ball was snapped,” Yates recalls.

“But as you get more experience, you get the timing a wee bit better. Still, these guys are so fast, TV doesn’t really do it justice. At field level, they can get close on ten metres in a nanosecond. You just can’t believe how fast they are at field level.”

Of course, you can never really plan for moments like the one Burnham, and his tightrope capabilities, required on Saturday. But Yates, who likely jogs a few kilometres every game, made sure he was planted in the right spot as soon as Shaq Johnson made a big play to set them up on the Hamilton 20-yard line with just two ticks left on the clock.

“Oh yes, absolutely, the play was going to be huge one way or the other,” he says.

“If this was just another play, it would have been cool, but with the UNBELIEVABLE comeback, it made that play so much bigger… you could just feel it and see it and hear it, so yes that’s what you want, to get that shot… corners on ball side are often a good bet, but it was just odds that the call was to that corner and sheer luck that it was where I was. 45-degree angles to the quarterback are often winners, so it increases the odds, but also a pain because the refs are also on that angle and often they ‘ruin’ your shot.”

The lengthy video review after Burnham was initially ruled out of bounds just added to the theatre for Yates. With instant photo evidence, it was hard to contain his initial excitement. Because as we know, video reviews of that close nature are seldom overturned due to lack of conclusive evidence to change the officials’ call on the field.

“That drama was nuts after the play, nobody knew if he was in or not. When I looked at the shot and zoomed in, it was awesome, I knew he was in, but I can’t cause a scene by showing it to a player or ref. Can’t do that, would cause all sorts of problems, so not cool. I still had the shot if the call was out of course, but that would have been a whole different story. So I’m glad they got it right.” 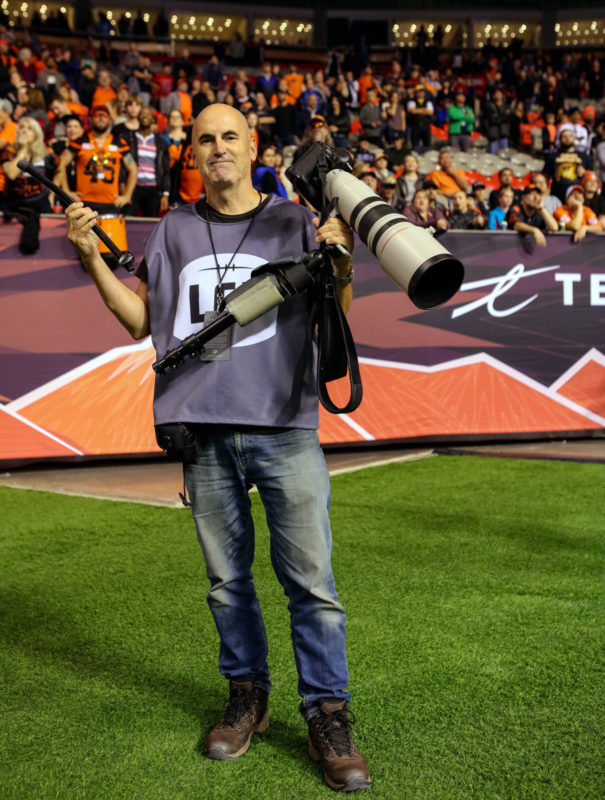 And of course, he can’t help but look back at other memorable moments that resulted in near danger.

“Glancing blows twice, and I missed the shot both times,” Yates chuckles.

“During a Vancouver Canadians baseball game, I was looking at the batter from the infield on one knee, right inside the first base line, a line drive hit the mat right behind my head, about 5 inches behind my head, left a scuff mark with a ‘thwack’ and went out the other side, 10 meters past the 1st baseman. But in football, two close misses but never a direct hit like that. In GSL flag football a mom hit me with her purse once because she couldn’t see her kid on this play, I had stepped in front of her to get the shot….my bad.”

Angry Moms. We forgot to mention that workplace hazard. 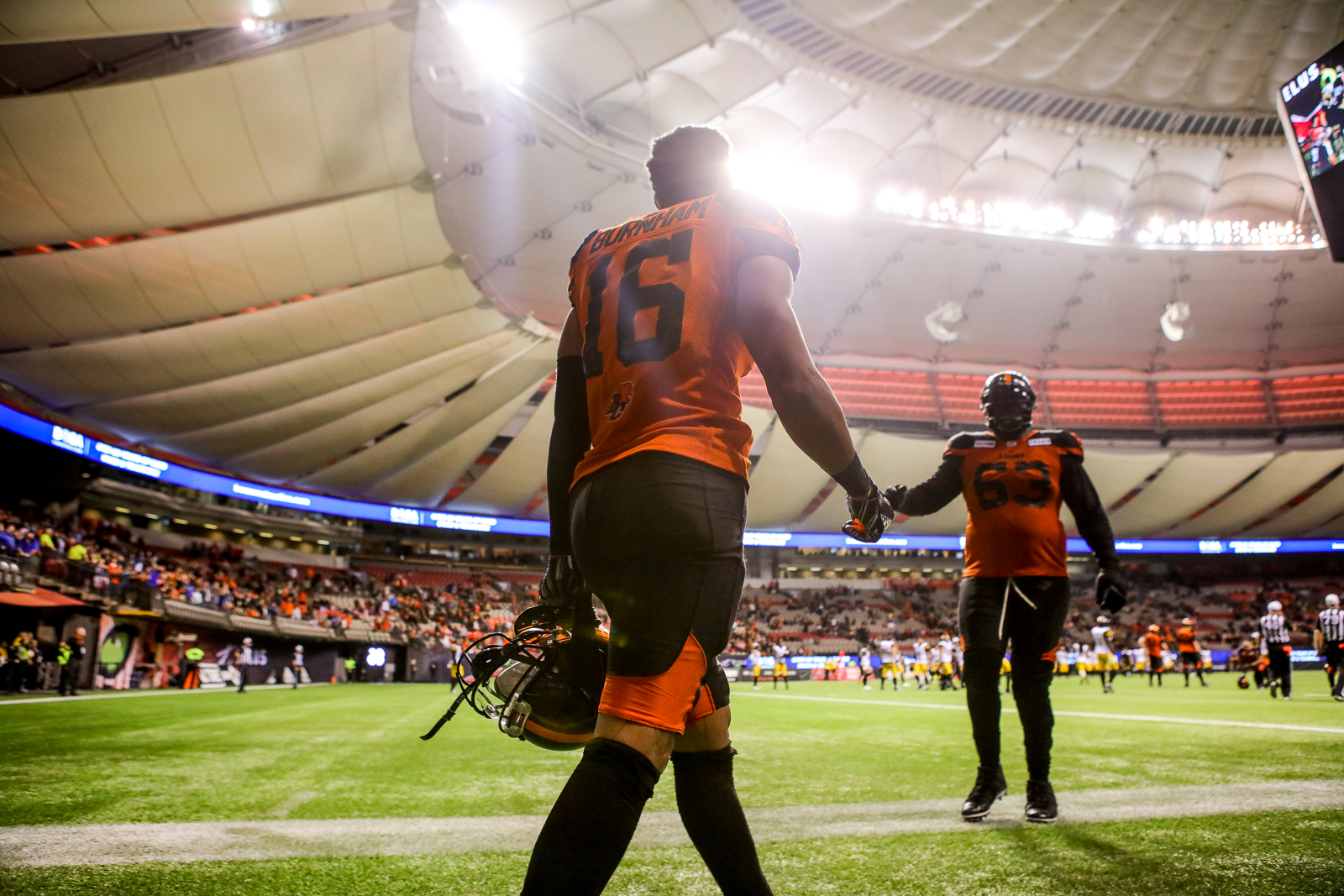 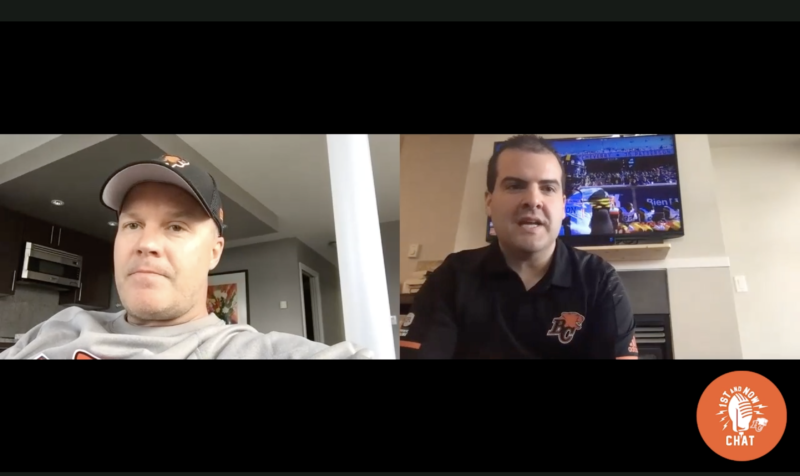 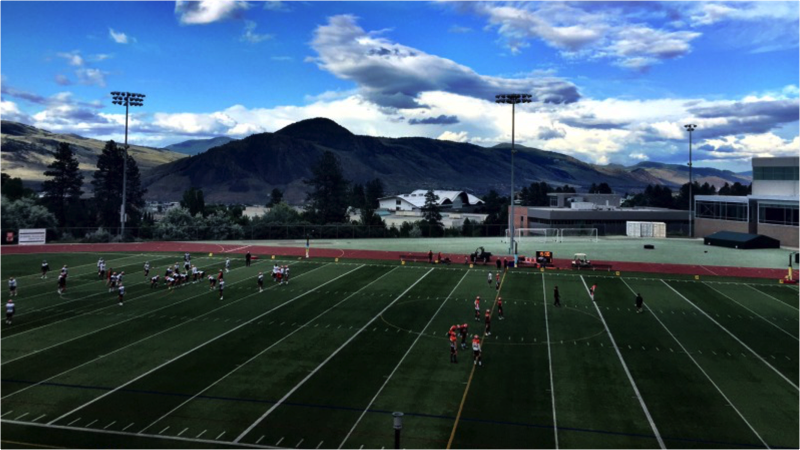