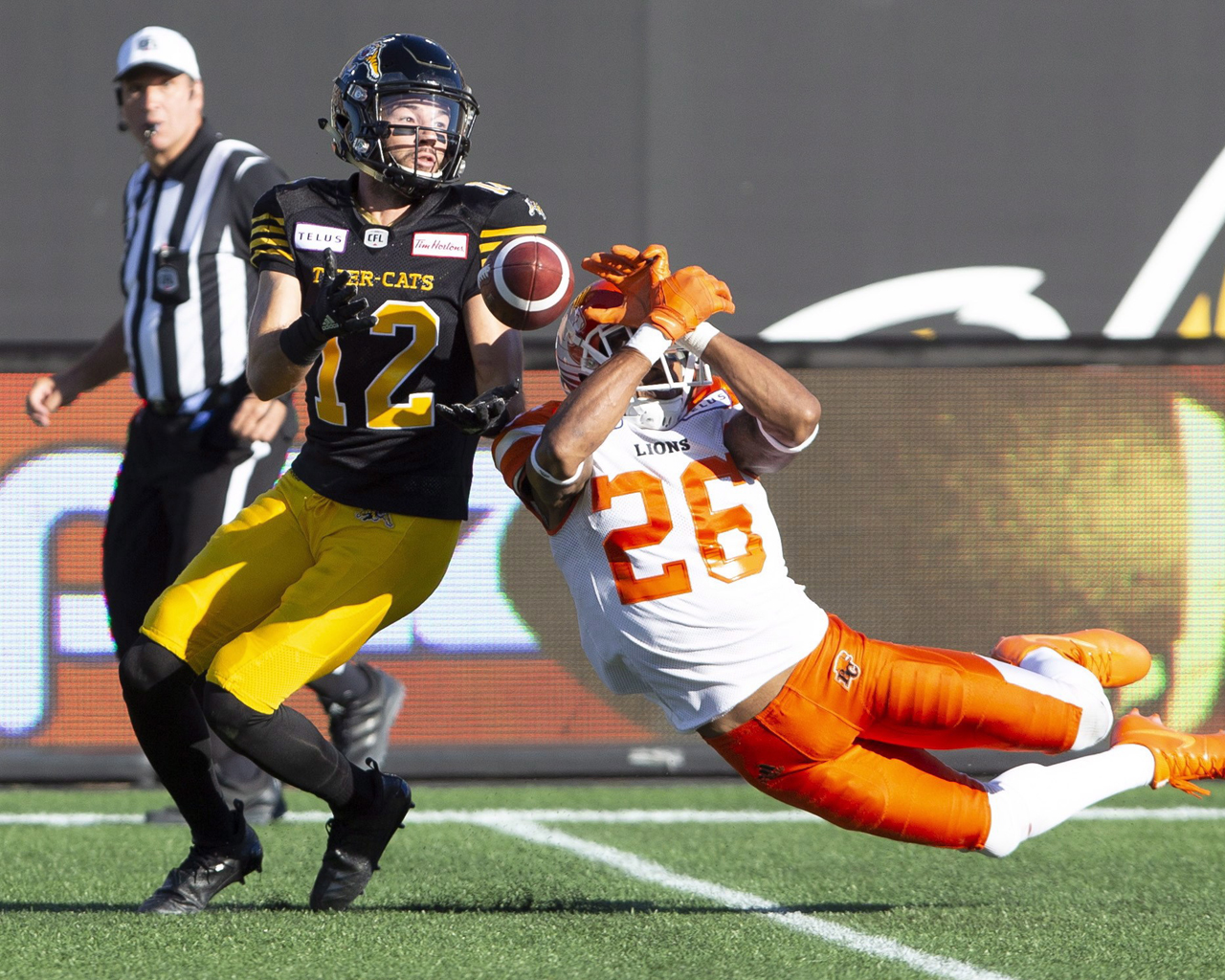 The ball slips through the hands of BC Lions defensive back Anthony Orange (26) straight into the hands of Hamilton Tiger-Cats wide receiver Mike Jones (12) during first half CFL Football game action in Hamilton, Ont. on Saturday, September 29, 2018. THE CANADIAN PRESS/Peter Power

The home team was jacked up after last week’s rollercoaster and that was apparent from the get-go. Jeremiah Masoli found Luke Tasker for a touchdown on the game’s opening drive, Jonathon Jennings threw a pick-six to Don Unamba on the Lions’ first play from scrimmage and the Tiger-Cats ( 7-7-0) never looked back in a 40-10 victory over your BC Lions ( 6-7-0) on Saturday at Tim Hortons Field.

As you might expect, many of the veteran players didn’t have much to add.

“Tough game. I don’t know what to say,” said defensive back TJ Lee.

“Defensively, we let them get away on second down. There was a lot of scramble plays they had, 16 (Banks) was able to get the ball and convert for them. We messed up a lot in the red zone and didn’t get enough turnovers.”

Masoli found his favourite target Brandon Banks for two majors while Jennings and the offence struggled to move the ball for most of the windy afternoon.

After some of the initial disappointment and post-game fireworks tempered, Odell Willis opted to take the glass half full approach.

“It’s just all on us, “explained Willis.

We can even point to the Lions’ Cinderella turnaround in 2011 when they dropped a 42-10 decision in Steel Town to fall to 9-7. They would not lose again.

But the past is the past and now they must focus on getting back on track with five games to go in their regular season.

“We’ve got to throw this one away, get ready for next week and give them their kudos for the win. It’s still about us and our journey. It happens. We’re on to the next one. It’s a great reality check. We’ve got to learn from it.”

Jennings and the offence had their chances to get back into it, particularly on their final series of the first half when his pass to DeVier Posey in the corner of the end zone fell incomplete with no time left on the clock and Hamilton led 30-3 when the teams left for their dressing rooms.

“We just got whooped. Didn’t come to play. I made some poor decisions and we just didn’t capitalize on any opportunities that we had. It’s just a tough game. Sometimes it just goes like that and they just whopped us.”

Depending on the result of Winnipeg’s game in Edmonton Saturday night, Jennings and company could wake up Sunday in 5th place in the ultra-competitive Western Division. 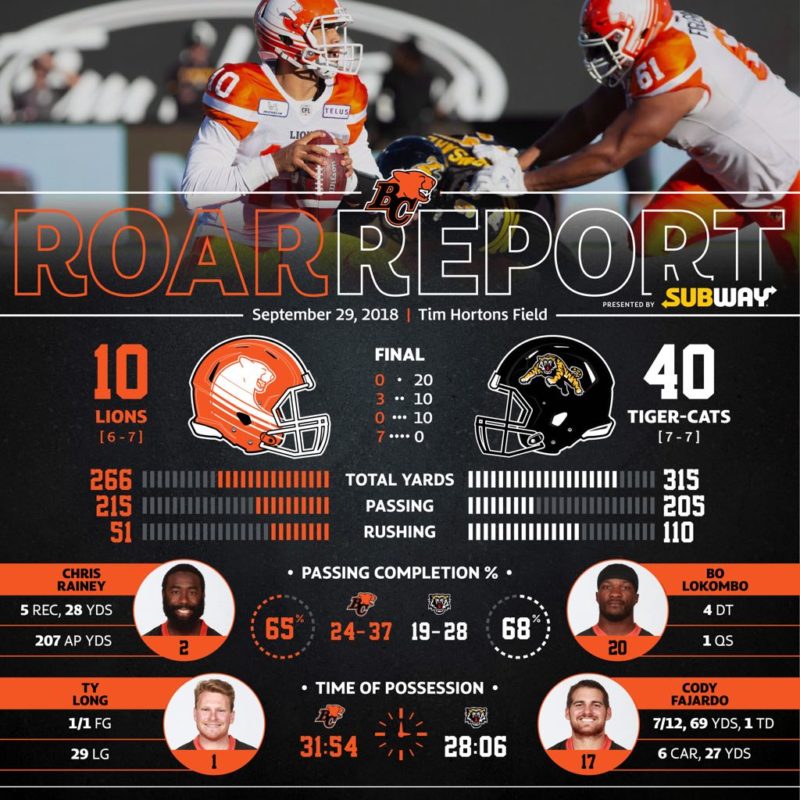 3- interceptions thrown by Jennings in three quarters before being taken out in favour of Cody Fajardo. Two of those were returned for touchdowns.

17- total Ticats points off of the three turnovers.

9- receptions for Banks in his return after missing two games with a groin injury.

20- the number of points Hamilton put up in the first quarter. The Lions had not allowed any points in the opening 15 minutes over the course of their three-game winning streak.

As you might expect, one of the big storylines centred around reaction to Lions players dancing on the Tiger-Cats midfield logo prior to their formal walkthrough at Tim Hortons Field on Friday afternoon. Wally Buono was asked by TSN’s Matthew Scianitti if he was surprised the Ticats took exception to the fun.

“Football is a funny game and motivation comes from a lot of things,” explained Buono.

“Some people get motivated personally, some people have to have other things motivate them. I’ve always felt if you’re going to do something like that, then you’ve got to be able to stand up and back it. Whether there was any intent, I don’t think there was, they played more physical than we did, their coaches did a better job of preparing them and as we all know, back to backs are tough. You’ve got to give Hamilton and their coaches credit. They got them ready, they played a great game and they took us out of it early.”

At the end of the day, you’ve got to have some fun. There was no ill will directed at the Tiger-Cats for Friday’s impromptu dance off. However, Buono went on to indicate he will discourage it from happening again.

The Lions are back at BC Place to take on the defending Grey Cup champion Toronto Argonauts on Saturday, October 6th. It is a 4:00 PM kickoff.