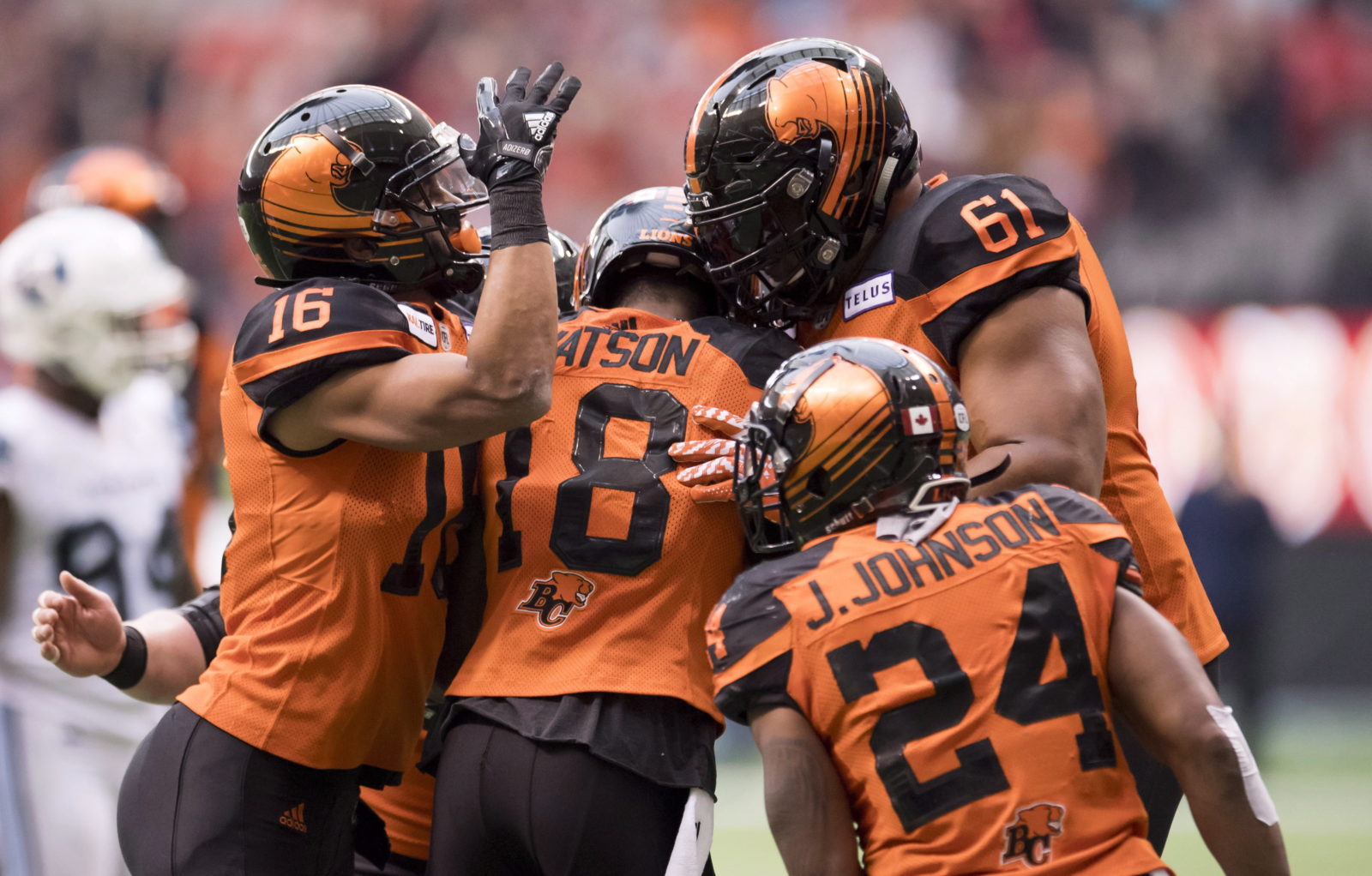 BC Lions wide receiver Cory Watson (18) celebrates his touchdown with his teammates during CFL football action against the Toronto Argonauts in Vancouver on Saturday, Oct. 6, 2018. THE CANADIAN PRESS/Jonathan Hayward

They took care of their own business on Saturday night and then received a nice Thanksgiving present with Saskatchewan grinding out a 19-12 victory over Edmonton in a defensive battle on Monday afternoon.

Those results moved your BC Lions back into a playoff position with the struggling Eskimos now occupying the West Division basement, having played one more game. Here are the Western Division standings with four weeks to play:

The Lions’ victory, combined with a Calgary win over Montreal earlier on Thanksgiving Monday also guaranteed there will be a West Division team crossing over to the East for a third consecutive season. By virtue of that, both Ottawa and Hamilton punched their tickets to the playoffs and are guaranteed a home game. First place and a bye to the Eastern Final is still in play with the two squads meeting in our nation’s capital on Friday, October 19th.

As for the Wild West, there is simply no easy way to handicap how the division may look when all is said and done. From a mathematical standpoint, the Lions can finish anywhere from 2nd to 5th and out of the playoffs altogether. A top-two finish might be somewhat of a pipedream: they would have to win three of their remaining four games, beating Saskatchewan by at least four points on October 27th in the process, and also have the Roughriders lose both of their remaining games while hoping the Winnipeg Blue Bombers drop two of their last three. It can also happen if the Lions win all of their remaining four games, including the four-point scenario in Regina, and the Riders drop just one of their other two contests and the Bombers finish with no more than 1o wins. Get all that? The Lions dropped the season series to Winnipeg and are currently behind Saskatchewan by virtue of a 24-21 loss at BC place in August.

The good news; in order to simply make it they don’t have to rely on the out of town scoreboard and can secure their spot in the November tournament if they continue to win games. That all starts with a visit to the first place Stampeders this Saturday night. The 12-2 Stamps have locked up a home playoff date for the seventh straight season and can clinch first place in the division with a victory on Saturday AND a Saskatchewan loss at Winnipeg earlier that afternoon. And yes there is a possibility the Lions could clinch a spot as soon as next week: they would have to win in Calgary and then take care of Edmonton on October 19th. Doing so would lock up the season series with the Eskimos and also guarantee they can’t finish with a worse record than the green and gold.

The resurgent Blue Bombers are back in the discussion following a three-game winning streak and must beat the Roughriders to keep their slim chances of second place and a home date in November alive. A win for the Green Riders puts them into the post-season and assures them of their first home playoff game since the 2013 season when they won their last Grey Cup. Should they prevail and the Lions take care of Calgary, Saskatchewan would still have an outside chance of finishing first. They visit the Stampeders next week.

And then there is the mystery of Mike Reilly and the Eskimos. A three-game losing streak has them below .500 for the first time in 2018 and as hosts of the 106th Grey Cup on November 24th you can bet they weren’t counting on being on the outside looking in with three games to play. But they are in the same mind frame as the Lions: just win baby. They will host Ottawa this weekend before a highly-anticipated visit to BC Place on the 19th. That result could determine which one of those teams survive beyond the first week of November. The Eskimos finish with a home date against the Bombers, another matchup that can potentially be an elimination game. How much do we love this league? Races like this are a big part of it. And your Lions can be extra thankful they control their fate with four games to play.