Playoff Notebook | Back To Familiar Grounds 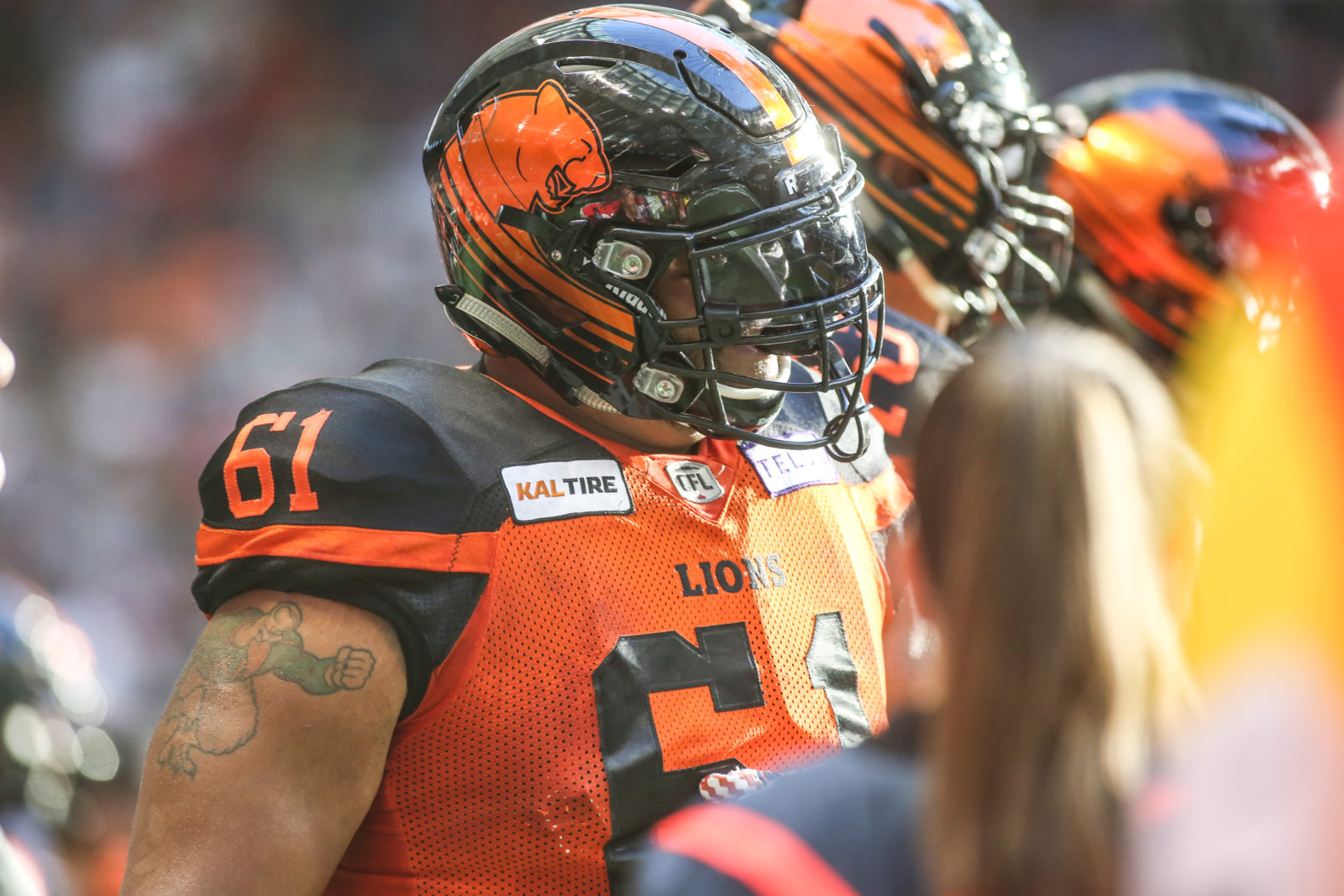 Playoff Notebook | Back To Familiar Grounds

Joel Figueroa knows first-hand just how championship-starved the passionate fans of the storied Hamilton Tiger-Cats fans can be. Fig, as his friends and teammates call him, suited up with the Ticats for the first three seasons of his career and was part of a squad that reached back to back Grey Cups in 2013 and 2014.

Now the hulking left tackle is feeling an extra boost of motivation as he prepares to get re-acquainted with the playoff environment in Steeltown.

“I enjoyed it a lot,” said Figueroa of his time in Hamilton.

“We had a lot of young guys and it was pretty much a new team that was put together. In a way, it was no different than how this Lions team was built.”

And the way Figueroa’s current team was constructed is hopefully tailor-made for this time of the year: tough, hard-nosed, bring your lunchpail to work kind of guys. When you think of it, not much different than the place they will visit on Sunday afternoon for the Eastern Semi-Final.

A couple of minor injuries aside, the Lions’ starting offensive line has pretty much been intact since training camp broke in Kamloops way back in the second week of June. For his part, Figueroa has come as advertised after GM Ed Hervey made filling the quarterback’s blindside a major priority on the opening of free agency. But everyone knows they don’t remember what you accomplished in the regular season.

“I think up front we’ve been playing pretty well. For whatever reason, we didn’t finish with the record we wanted, but we’re very much in the hunt and this is what you play for: just the shot to go all the way,” adds Figueroa.

“We feel that we’re going to go in there, do what we do and have a shot to get this W and move one step closer.” 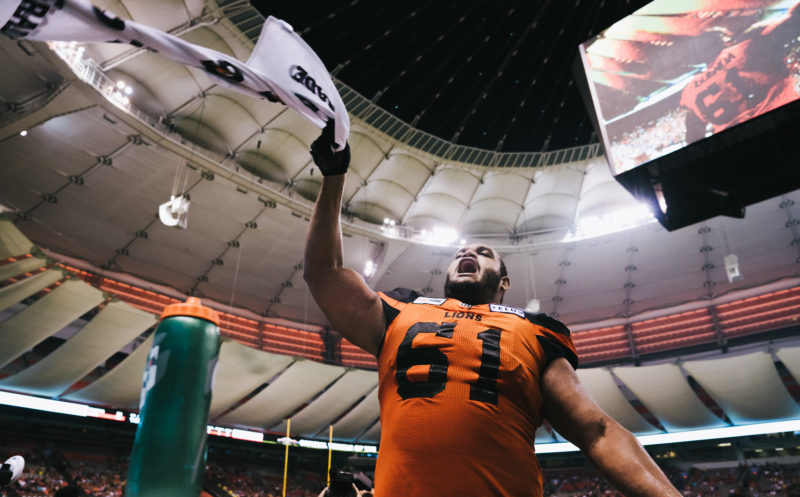 Joel Figueroa (61) of the BC Lions during the game against the Edmonton Eskimos at BC Place Stadium in Vancouver, BC on Thursday, August 9, 2018. (Photo: Johany Jutras / CFL)

He knows it will be a big battle up front against some of his old friends and especially looks forward to battling Ted Laurent,  an East Division All-Star and the Tiger-Cats’ leader with eight sacks in the regular season.

“We just need to approach this like we have every other opponent. There are a lot of solid defensive tackles in this league and he’s one of them. Our unit will definitely have to do certain things to slow him down… I can’t really discuss that though (laughs).”

Collectively, the offence led by Travis Lulay needs to show more than what they did during their two-game losing streak to end the regular season. While we’re on the topic of newcomers on the roster, Figueroa and company know they need to help utilize a potentially huge difference maker in the backfield. None other than Tyrell Sutton who has not suited up in a playoff game since 2013 with the Montreal Alouettes.

“I feel like every team is going to do what we’re doing,” explains Figueroa.

“Guys are going to start running the ball more and that’s what you need when it starts getting cold. Tyrell is definitely a bruiser and does a lot for us. He can run, he can pass block and run routes as well. That’s good for us to have a well-rounded back.” 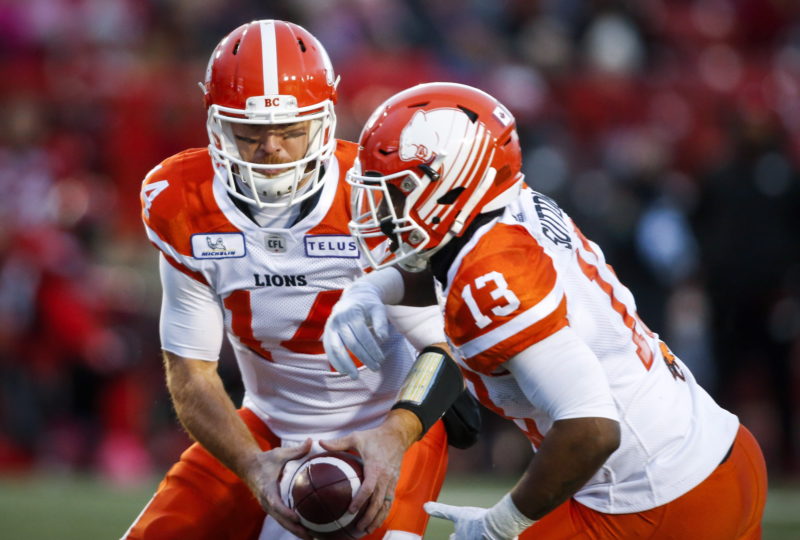 BC Lions quarterback Travis Lulay, left, hands the ball off to Tyrell Sutton, during CFL football action against the Calgary Stampeders, in Calgary, Saturday, Oct. 13, 2018. THE CANADIAN PRESS/Jeff McIntosh

The forecast is calling for a mix of rain and snow when the Lions will practice at McMaster University on Friday, then expected to clear up for the weekend with game day temperatures falling as low as minus three Celsius. You can tell it’s playoff time based on the more frigid forecast. Now Figueroa and his teammates will try and take the road never travelled to Grey Cup: representing the East Division as the crossover team. Although, if it happens they won’t care too much for history.

“Winning is winning. We harp on it all the time; it doesn’t matter if you win by ten, one or fifty,” states Figueroa.

“That’s all they remember. They won’t remember that you crossed over or anything like that. We’re just focusing on this one game at a time and Hamilton is the hurdle we have to jump over.”

And you know he will relish the opportunity to get a playoff win against his old friends in an environment he loves to play in.

“I love it. The fans were great when I was there and it’s a nice feeling to play there. It’s loud; they have great people in the community, real hard-working, blue-collar type football fans. It’s always good when they pack the place.”

Lions players, coaches and staff were bound for the charter plane after Thursday’s practice and scheduled to land in Hamilton around 10:30 PM local time on Thursday night. Going a day earlier than they normally would for an Eastern trip is designed to not only get accustomed to the time change but get the body clocks right for a 10:00 AM Pacific kickoff on Sunday.

“Friday is going to be a tough day for the players, but that’s understandable,” said head coach Wally Buono.

“It gives them also opportunities to rest, get used to the time zone. 1:00 (Eastern Time) games are early and these are not something that players usually do until the playoffs. I think the more you can make that change for them, the better it is.”

Following Friday at McMaster, the team will have its usual day before walkthrough at Tim Hortons Field. Sunday’s pre-game show is underway at 8 AM on TSN 1040. 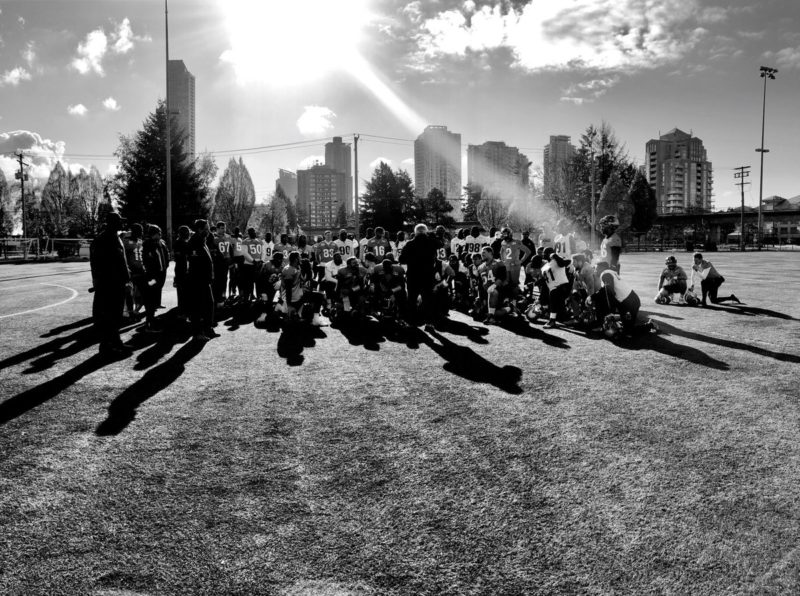 Props to Ty Long on his West Division nomination for CFL Most Outstanding Special Teams Player. A well-deserved nod for the second-year specialist who led the league in punting yards, punting average and hit 87.6 per cent of his field goal attempts (43/49) this season.

His counterpart is Ottawa placekicker Lewis Ward who set a single-season CFL record with a 98.1 success rate on field goals and an all-time league record 47 straight attempts made.

Both reliable kickers are no doubt worthy of the award. 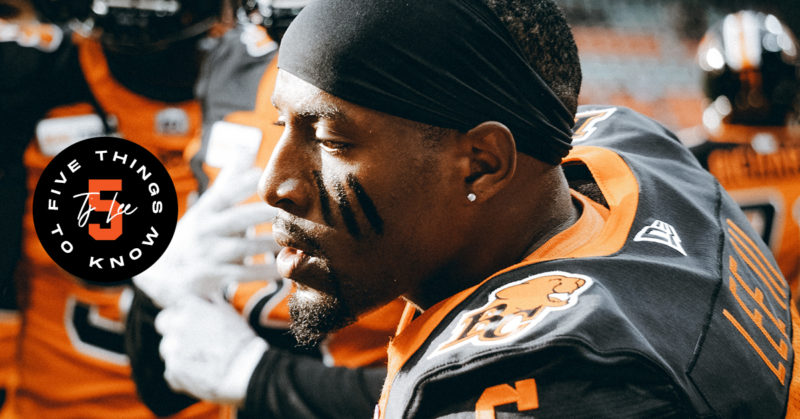