While the snow has barely settled on the 2018 season, it’s time to look ahead to 2019 as the Canadian Football League has announced next season’s schedule this morning.

For fans of the Lions it’s all about the Saturdays as the club plays six of its nine regular season games on weekends in 2019 with two games on Friday nights and a feature game on Thursday Night Football in July.

“We’re pleased with the 2019 schedule and our fans will be as well,” said president RickLeLacheur. “We know how popular Saturday games are in this market and it was our number one priority to get as many as we could this year.” 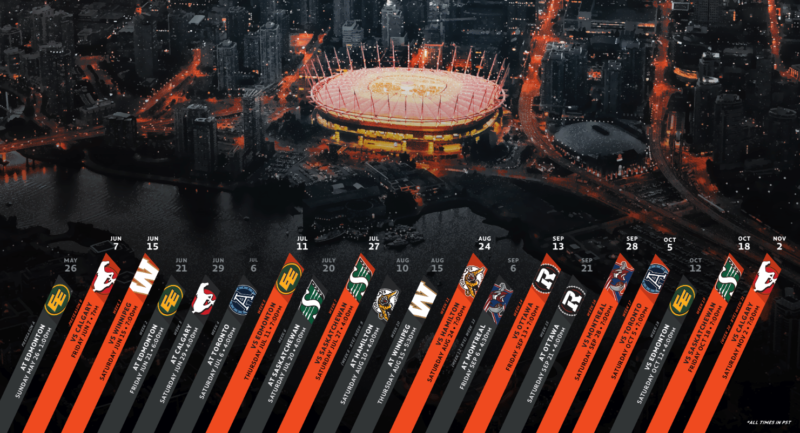 The club kicks off the 2019 home campaign versus the Winnipeg Blue Bombers on Saturday, June 15th before heading out on the road for three games and returning to BC Place for a Thursday night tilt against the Edmonton Eskimos on July 11th.

West Division rival Saskatchewan Roughriders make the first of two visits on Saturday, July 27th with a 4:00 pm kickoff and then return on Friday, October 18th. The Grey Cup-champion Calgary Stampeders make their only regular season appearance in Vancouver on Saturday, November 2nd.

The second half of the regular season schedule features all four East Division teams making the trek west and five games after Labour Day. The Hamilton Tiger-Cats come calling on Saturday, August 24th followed by the Ottawa RedBlacks on Friday, September 13th. The Montreal Alouettes roll into town on Saturday, September 28th and the new look Toronto Argonauts visit on Saturday, October 5th.

BC Lions Training Camp gets underway on Sunday, May 19th in Kamloops and the Lions get their first taste of preseason action a week later in Edmonton on May 26th. The club’s home preseason game is slated for Friday, June 7th against Calgary.