The more up-to-date information on Mike Reilly’s football resume reveals some pretty remarkable credentials. Who wouldn’t want a quarterback in the midst of three consecutive seasons of over 5,000 passing yards?

And who can forget earning Grey Cup MVP honours when his Edmonton Eskimos took down Ottawa on a cold November 2015 evening in Winnipeg? Then, of course, there are the multiple All-Star selections and league Most Outstanding Player in 2017 where he threw for no less than 30 touchdowns, matching that total a year later. All of these credentials add up to the best Lions free agent signing since perhaps Doug Flutie nearly 30 years ago. Few would dispute that claim.

But the reality is you wouldn’t blame Reilly if he didn’t think a day like this would ultimately come- being the hired gun for a franchise looking for a major shot in the arm to get them back to Grey Cup contention.

After bouncing around NFL camps in Pittsburgh, Green Bay, St. Louis and Seattle with only some minimal pre-season duty with the Steelers to put on any game tape, it may have served as a rude awakening for a guy who passed for a single-season record 2,280 yards in his senior season at Flathead High School in Kalispell, Montana.

That was enough to earn the attention of Washington State University where he would redshirt as a freshman in 2004. After transferring to Central Washington to major in both football and mechanical engineering, he proceeded to throw at least one touchdown pass in 46 consecutive games (an NCAA All-Divisions Games Record) and break pretty much every school passing record.

“It’s hard because anybody playing professional football was a top dog in college and especially at the quarterback position when only one guy can play. You’re used to being the guy,” explains Reilly when looking back at the early days.

“When you get to the professional ranks, you have to start over. I’d never been a third or fourth string quarterback in my life and suddenly that’s where I found myself.”

Although the NFL experience didn’t go smooth, Reilly would get a sense of stability and career development in his first stint with the BC Lions from 2010-12.

Along with earning his first Grey Cup ring in his second CFL season, Reilly got the chance to learn the ropes from 2011 league Most Outstanding Player and Grey Cup MVP Travis Lulay. Ironically, it was his new offensive coordinator Jarious Jackson that was deemed expendable when Reilly climbed the Lions’ depth chart behind centre.

The full season as Lulay’s understudy served as the main catalyst for what was in store after newly minted Eskimos GM Ed Hervey acquired his rights from Wally Buono just before the 2013 free agency period opened.

“I was lucky to come into the situation that I did, having Travis Lulay and Jarious Jackson as the quarterbacks in front of me because they’re both great football players but great human beings as well,” says the three-time CFL passing leader.

“I’ve been very close with Jarious for the longest time. He was my quarterbacks’ coach while I was in Edmonton. We won a championship together. And I think everybody knows my history with Travis. He was a groomsman in my wedding, our families are extremely close and we both have nothing but daughters. I think I have nothing but daughters because I used to give him grief about having nothing but girls (laughs).” 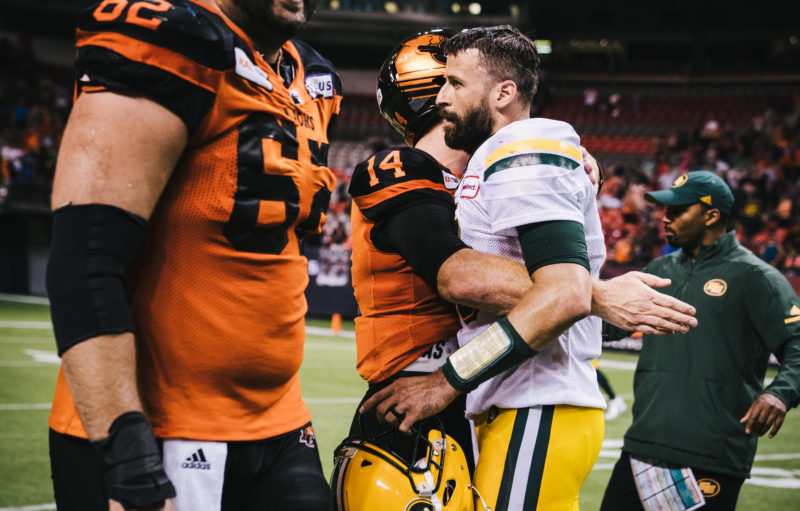 Mike Reilly (13) of the Edmonton Eskimos and Travis Lulay (14) of the BC Lions after the game at BC Place Stadium in Vancouver, BC on Thursday, August 9, 2018. (Photo: Johany Jutras / CFL)

As Reilly was accustomed to at that point, the move to Alberta’s capital provided a roadblock in the long path to becoming a starter. It Matt Nichols, another quarterback prospect that played college ball in the state of Washington standing in Reilly’s way. When Nichols suffered a torn ACL in training camp, the man known as “Rikester” became the Eskimos’ go-to-guy. Everything he accomplished after that point didn’t necessarily make it easy for him to head west for these next four years and possibly beyond.

When he passed for 511 yards in a losing cause on August 8th of that season- at that time, the fourth-highest single-game total by any Eskimos quarterback- the league got a first true glimpse at a rising star. And a few observers on the west coast maybe started to wonder what had got away.

All those factors in place, it was no doubt still hard for the 34-year old to say goodbye to a city and organization where he enjoyed so much success over a six-year period.

“It’s not an easy thing to do, for sure,” says Reilly.

“I spent a good majority of time in Edmonton, been there for six years. When I went there I had just met my wife and we’d been dating for a month before I signed a contract. Since then, we’ve been married, we have two kids that were both born in Edmonton. You build a lot of memories and those are things I will never forget. They can never be taken away. Winning a championship there, winning a MOP, all those things were incredible experiences that I’m truly grateful for. The fanbase there accepted me and was excited from day one. They rode with us through some ups and downs and there were plenty of both. So that was a great time in my life and I never took that for granted.”

A lot has changed since Reilly moved across the Rockies six years ago. Now a family man with wife Emily and two young daughters, he has gained a new perspective on the true joys of life. One thing that isn’t new, is his relationship with Hervey, the man who believed in him six years ago.

“Me and Ed have a history that I don’t think you can replace,” explains the quarterback.

“For him to be the guy that gave me my first opportunity to be a starter and take a chance on me, a guy that was, for the most part, unproven. I had two starts here in BC. One went really well, one not so well. He obviously saw something that made him take a chance and I’ve always been appreciative of that. I said that in my MOP acceptance speech. He was one of the first people I listed as being grateful towards because you don’t know if you’re going to get that opportunity in professional sports. A lot of guys don’t get that chance.” 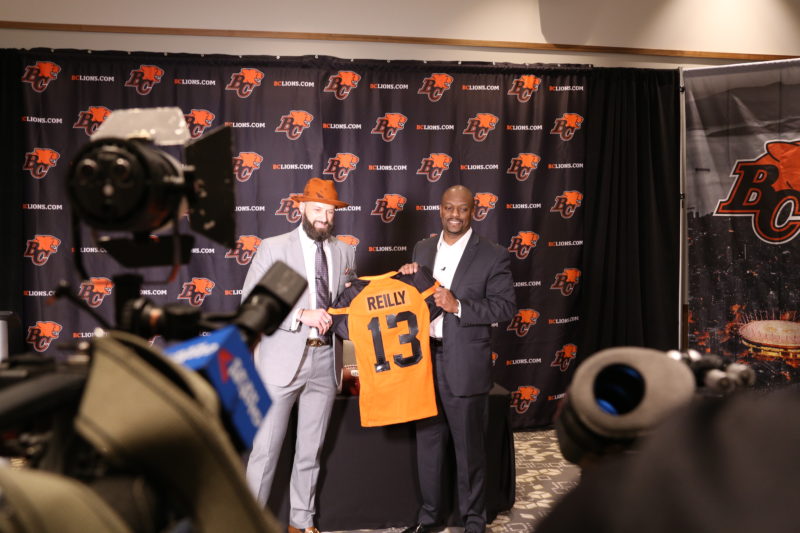 General manager and quarterback share the same vision when it comes to championships. They also put the same emphasis on the importance of putting more fans in seats at BC Place and getting more people excited about BC Lions football. Winning would certainly go a long way in helping out that cause. The GM pointed to the start of their relationship in Edmonton where he wanted Reilly to make a name for himself in this league and then graduate to a level where he could be a great ambassador off the field.

“That was the second part of the vision in speaking with Mike,” says Hervey.

“He and I share the same passion for this league. We love this league, we appreciate this league and we understand that we have to do our part to help this league. That means that we have to inject life into a fan base where some might be sceptical of this organization and some might be playing ‘wait and see’ with this organization. I believe that today, for those who are sitting on the fence, we put our money where our mouth is and we ask that you put your faith back into the BC Lions.”

Many have pegged this move back to the west coast as a foregone conclusion; especially when you consider Hervey is now steering the Lions’ ship and the market’s proximity to his offseason home in Seattle. However, the quarterback will be the first to tell you the family angle is a benefit, not the sole reason he’s here.

“Family is the most important thing in my life,” says Reilly.

“We’re always going to do what’s right for us and it’s certainly is a nice advantage to have them very close and to be able to hop and the car and drive up for the weekend, all that kind of stuff. But make no mistake that my decision to come to BC was not based on the fact that my family is close by. We’re looking out for our family, but we’re trying to win championships. The things that I’ve seen done around this team since Ed took over and the conversations that I’ve had with him and DeVone about the vision for this team, that gets me excited about the possibility of being able to win multiple championships. If that wasn’t the case, regardless of how close the family is, we wouldn’t be here.”

You can hear in his voice just how motivated he is to add to his Grey Cup ring collection and join the likes of Lulay, Dave Dickenson, Damon Allen, Danny McManus, Roy Dewalt and Joe Kapp in the exclusive group of signal callers that have brought the silver chalice to the west coast.

“I’m excited to move on to the next chapter. This is a different scenario, but one that I’m extremely excited about and I couldn’t be happier with where we’re at.”