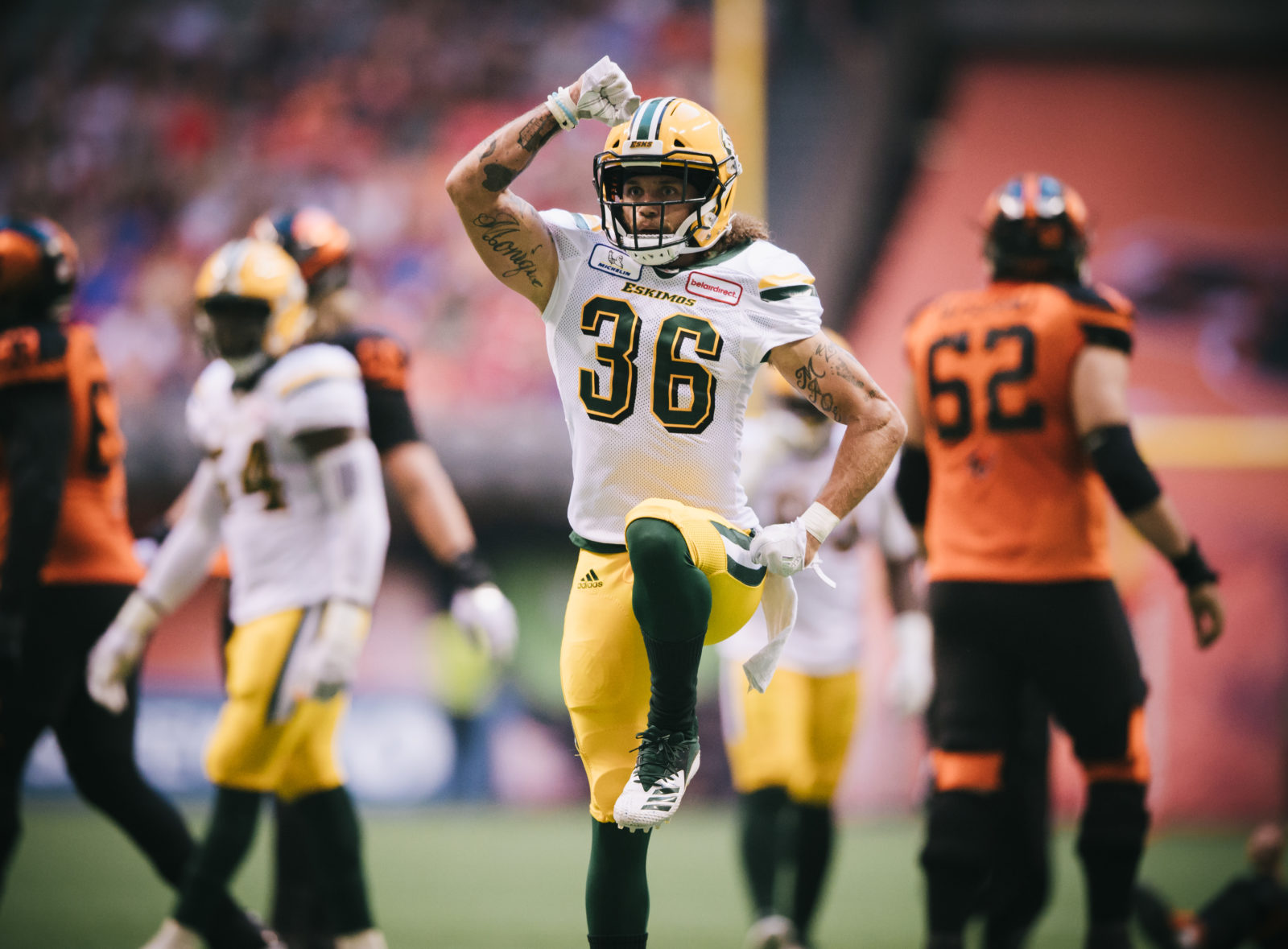 Aaron Grymes (36) of the Edmonton Eskimos during the game against the BC Lions at BC Place Stadium in Vancouver, BC on Thursday, August 9, 2018. (Photo: Johany Jutras / CFL)

It may have come six years later than he originally anticipated, but the journey to British Columbia is complete for Aaron Grymes. Quick history lesson: the athletic defensive back out of the University of Idaho was certain he’d wear Lions orange after attending the club’s free agent camp in his hometown of Seattle in 2013.

“I remember it clearly to this day,” recalled Grymes in a chat with bclions.com.

“Wally, Mark Washington and RP (Ryan Phillips) were all there at Rainier Beach High School. Afterwards, I thought they were going to sign me and I would be headed up the street to play football.”

As fate would have it, his college defensive backs coach Torey Hunter, also a fellow Seattleite, was a new member of the Edmonton Eskimos scouting department where Ed Hervey had just been promoted to general manager. One of their initial moves was making sure Grymes was added to the Eskimos’ negotiation list. For Buono and company, it was chalked up as one that got away.

Along with being a key piece of a defence that brought the Grey Cup back to Edmonton and earning a CFL All-Star nod in 2015, Grymes racked up 11 interceptions in 66 games, one of those taken to the house against the Lions at BC Place last October, and also earned a contract with the Philadelphia Eagles before returning to Edmonton in late 2017. The highly sought-after free agent couldn’t resist the opportunity to reunite with some old friends and be closer to Seattle.

He makes his offseason home in Moscow, Idaho with wife Hannah and two daughters: five-year-old Zoey and four-month-old Flora. “The fans are awesome, the stadium is awesome and the area is awesome. I kind of sold my older daughter on the move by telling her I hope the guy that beats the drums will be at the games,” laughed Grymes.

“I also told my wife that I usually play good games up there in Vancouver and now I get to do it with the home team.”

Grymes also couldn’t resist the chance to join childhood friend TJ Lee in the Lions’ secondary. The pair first played football together at the age of seven and were teammates at West Seattle High School where Grymes also excelled in track and finished fifth in the state of Washington in the 100-metre dash. It’s safe to say had you told them as kids they would be pros in the same defensive backfield one day, neither would have believed it. 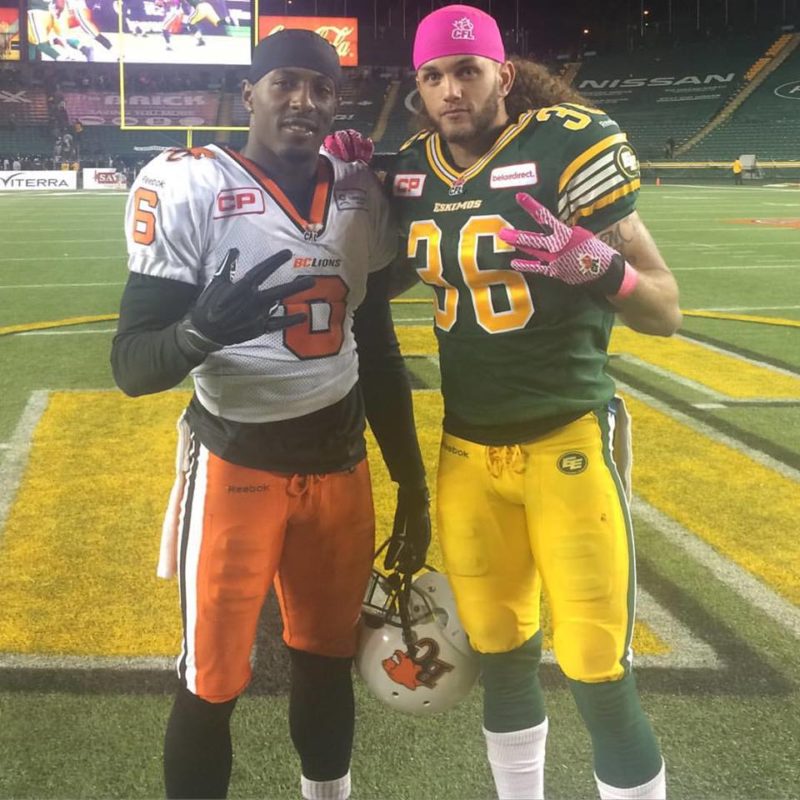 Aaron Grymes and TJ Lee after a matchup at Edmonton’s Commonwealth Stadium on October 17th/2015.

“I would have had no idea what you were talking about. We both definitely have always had the plan of ‘let’s make it big,'” said Grymes of his long history with Lee.

“To actually have it come true as teammates is pretty unreal.”

Adds Lee: “Being able to play with my best friend is nothing short of a dream come true. Along with his nice hair (laughs), he brings physicality as well as a high football IQ. To have someone with that work ethic and leadership is a huge asset, not only to our defensive backs but the entire team.”

And of course, the Emerald City contingent of the Lions’ secondary doesn’t stop there. Grymes, Lee and company will have Phillips as their defensive backs coach; a guy who knows a thing or two about carving out a long career after showing up to his first professional training camp as a relative unknown.

The free agent camp six years ago has been far from Grymes’ only encounter with Phillips.

“We’re proud of where we’re from and for good reason,” said Grymes.

“Having RP back there coaching is kind of a blessing for me. He’s a 12-year BC Lion and a future Hall of Famer in my eyes. Even from afar when I was in Edmonton, I would still reach out to RP sometimes for advice on how he got to where he was because that’s where I want to be one day. It will be really cool having him as a coach. I respected him a lot as a player, but more importantly as a friend.” 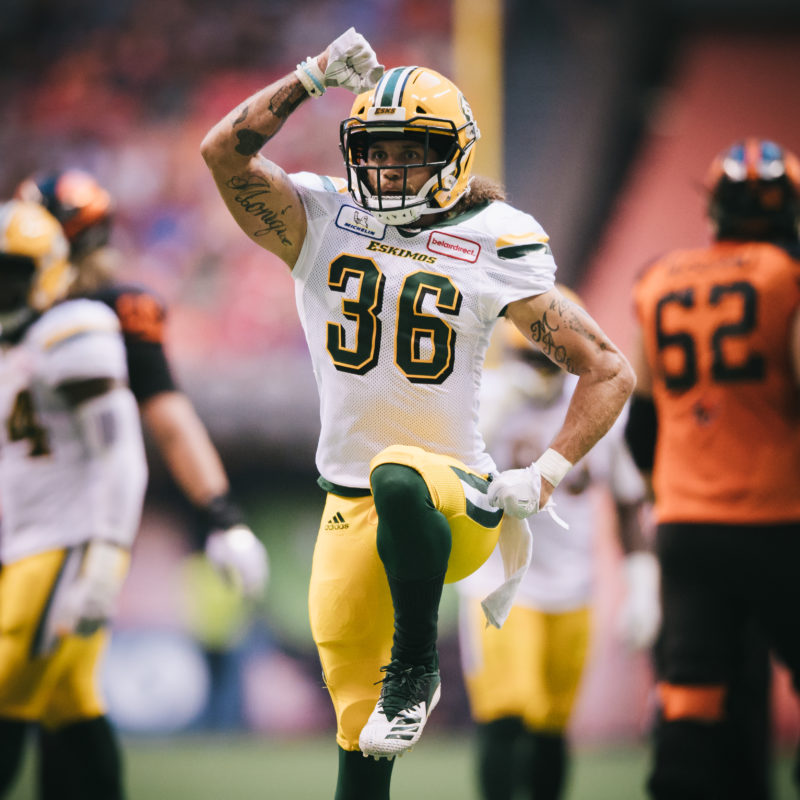 Aaron Grymes (36) of the Edmonton Eskimos during the game against the BC Lions at BC Place Stadium in Vancouver, BC on Thursday, August 9, 2018. (Photo: Johany Jutras / CFL)

The defence will surely benefit from practising against Mike Reilly every day. Grymes already knows this from his five-plus seasons as a member of the green and gold. “In my opinion, Mike is the best quarterback in the CFL,” said Grymes.

“He’s a very competitive guy. If you make a play on him he’s definitely going to throw the ball back at you. He wants to get his play in against you as well. To be able to practice against him every day only brings out the best in me. Being able to grow our friendship will also be a lot of fun.”

Much of the free agent excitement has so far revolved around the addition of Reilly and a couple of dynamic receivers. But let’s not understate the potential makeup of this defence that so far has a solid mixture of returnees and additions like Grymes, Chris Edwards, Josh Woodman and Terrell Davis.

Even if it has come a few years later than anticipated, Grymes’ presence can mean nothing but good things for the goals on defence.