Big O Looks Back With No Regrets 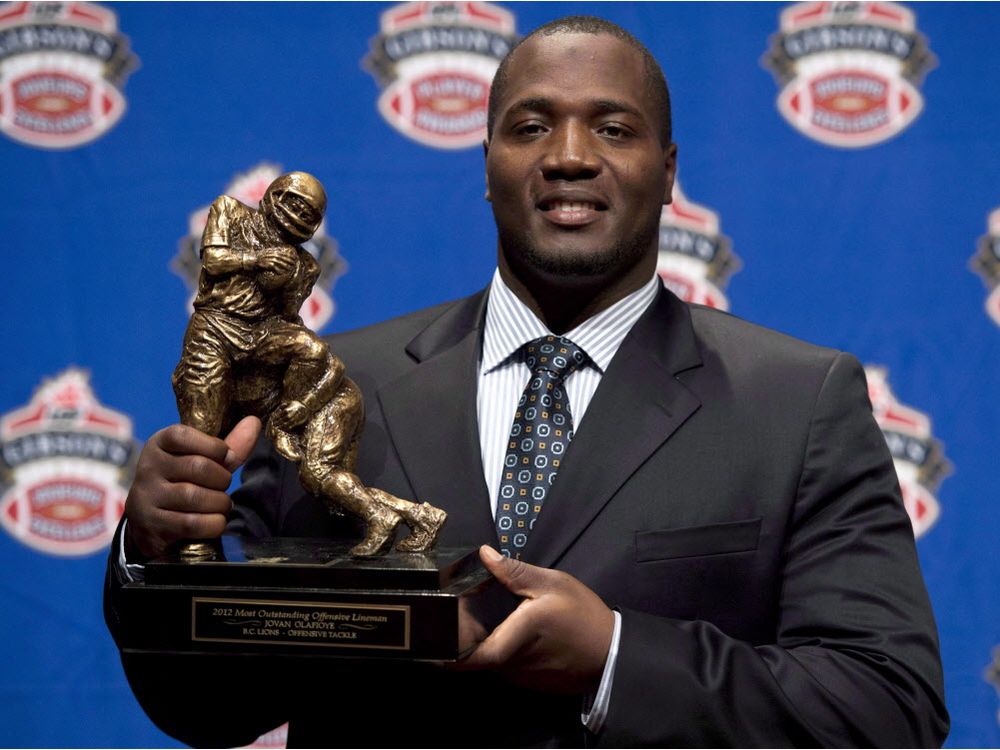 Big O Looks Back With No Regrets

When chatting about the difficult decision to walk away from pro football, Jovan Olafioye couldn’t help but reflect on how his path to Canada began. Flashback to a BC Lions open workout in early 2010. The big lineman out of tiny North Carolina Central University had just been cut following a mini-camp with his hometown Detroit Lions. Like many that came before and after him, the CFL represented perhaps a final opportunity to make it in the professional ranks. Knowing what we know about ‘Big O’ now, it’s no surprise that he made a solid first impression.

“Wally was running the offensive line drills and I could tell he took a liking to me after I got done with the short shuttle,” remembers Olafioye.

“I talked to Wally and (then director of player development) Roy Shivers after the camp. They told me to send them my highlight tape and we’ll see what happens later on. They ended up sending me a contract two or three weeks later and the rest is history.”

He walks away as a six-time CFL All-Star, winner of the league’s Most Outstanding Lineman award in 2012 and of course, there was the 2011 Grey Cup victory where he helped anchor a nasty offensive line that helped the likes of Travis Lulay and Andrew Harris do their thing. And who can forget? He also caught a touchdown pass to help solidify a big win in Regina in 2016.

You can easily make a case for Olafioye as the best offensive lineman this franchise ever had and we know there have been plenty of good ones. Yet, despite how he played on the field one of his more remarkable traits was to be a big teddy bear off of it.

That’s why it’s no surprise that family played a huge role in his decision to move back home to suburban Detroit and take a job as head football coach and administrator at Ecorse High School, his alma mater. He looks forward to spending more time with his fiancée Desmabra and daughter Dezyrah, 5, and Jovan Jr, 1. 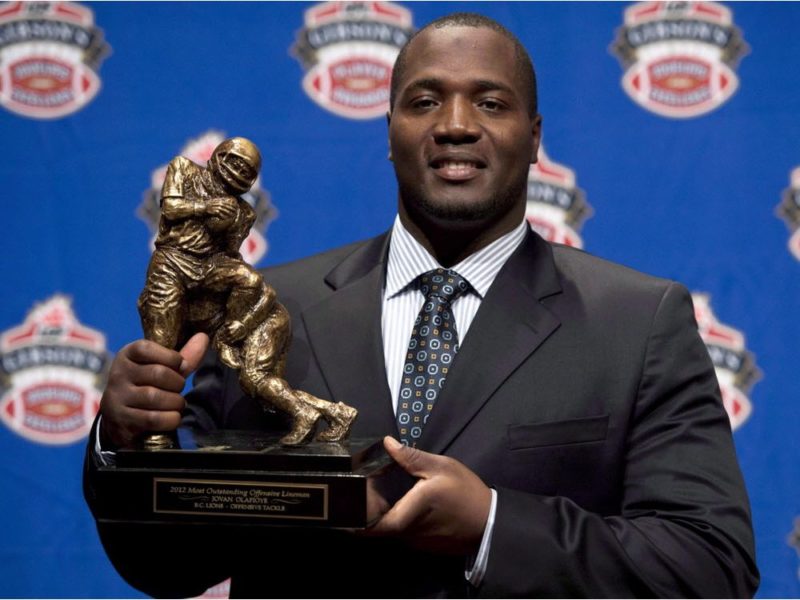 B.C. Lions offensive tackle Jovan Olafioye holds the trophy for Most Outstanding Offensive lineman trophy as he poses for photographers during the CFL awards show in Toronto Thursday, November 22, 2012. . THE CANADIAN PRESS/Sean Kilpatrick

“I got tired of seeing them grow up through Face Time,” laughs Olafioye.

“My fiancée understood what I had to do to be a professional football player. She knew what she signed up for when we got together in college. It was understandable but hard at the same time. I missed my daughter’s birth (in 2013) because we were playing in a playoff game in Saskatchewan that same day. I’m ready to be home with the family and now I’ve got a good steady job that pays well. I could still provide for them and that’s what it’s all about.”

We’ve talked about the ups. There was also a few downs, particularly health issues that led to his contract with the St. Louis Rams being voided in 2012. Then there was the trade to Montreal for 2017 that didn’t pay off for him or the Lions for that matter. The silver lining in all of it? Olafioye still got to finish his career in orange.

“No regrets. I’ve definitely been blessed to play pro football for nine years,” he said.

“I don’t know what would have happened if I went down there (NFL), I could have had a career ending injury. I believe I had a hall of fame career in Canada and you can’t take anything away from that. I have no regrets at all. In hindsight, I knew it (the trade) was part of the game. I know it had hurt my feelings, but I think it hurt them too with the problems they had on the offensive line. In the back of my mind, I knew it was part of the game, part of the business so I didn’t take it as such. I went to Montreal and gave it all that I had.” 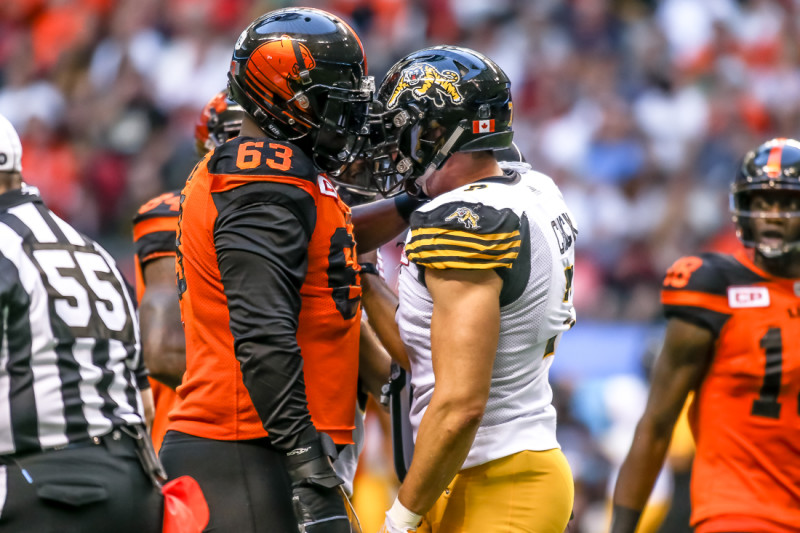 Looking back at that evaluation camp in Florida, it’s no doubt he took an immediate liking to Wally Buono and made sure to never sever that relationship in his eight seasons with the Lions. Olafioye was quoted as saying he would “run through a wall” for Buono when the CFL’s all-time wins leader announced his return to the sidelines prior to 2016.

“It was awesome to play for a legend and a guy I really care for a lot and respect. He’s been like a father figure to me and taught me a lot about life, being a man, being a good father,” explains Olafiyoe.

“He’s always been there for me and always believed in me. When the NFL was turning me down he would reach out to make sure I was okay. That really meant a lot to me. It was just amazing and I was glad I was able to be there for his last season. Unfortunately, we weren’t able to finish strong and win another Grey Cup but it was amazing travelling the country with him while he got his farewells and all of the respect he deserved.”

As for what he will miss the most? Other than the locker room camaraderie and thrill of competing on the gridiron itself, the loveable Olafioye couldn’t say enough about the great fans he met over the years.

“The fans in BC are great, always supportive of the team and me,”

“Even when I was looking for a house last season, so many fans came out and tried to help. The fans have been amazing to me and I want to thank them for opening up their arms and welcoming me. I’m going to miss them.”

You know he will one day get the chance to thank them again when he gets added to the club’s Wall of Fame at BC Place.

“I’m definitely looking forward to that. My fiancée and I are already talking about it. It is a dream of mine to go in the Lions Wall of Fame and also the Canadian Football Hall of Fame. That’s my goal and hopefully, all of it happens.”

Not bad for a solid guy who was just looking for a chance in Miami nearly a decade ago.