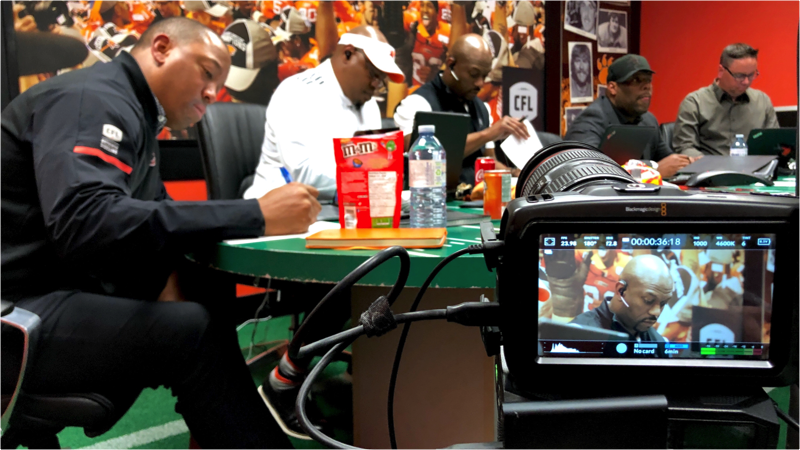 It may have been a far cry from free agent frenzy when he came swinging out of the gates with perhaps the biggest splash leaguewide, but GM Ed Hervey and his brass could hardly contain their smiles as action wound down in their war room Thursday night.

The overall consensus is they upgraded their Canadian talent quite significantly. And that’s saying something when you consider they were backstage until the 26th overall pick in round three. As always, there were overtures to move up. In the end, Hervey was more than happy to stick it out and land Missouri linebacker Noah Robinson with his first selection of the night.

“I’m a patient person. Patience is a virtue and fortunately, that’s one of those things that I was blessed to have and we were waiting patiently for the opportunity to make a selection,” the GM said.

“I know people say they got the player that they wanted. You hear that all the time. In this case, it was. This was a player that was high on our list, it was an area we wanted to get with our first pick in Noah Robinson and then as the draft carried on we were able to address areas for our special teams for the most part. On the defensive side of the ball, we wanted to get bigger, more athletic and more physical. I feel like we’ve done that.”

A native of Barrie, Ontario, Robinson’s most productive college season came in 2015 at Memphis where he posted 25 total tackles in 12 games, forced one fumble and had one recovery. He transferred to Missouri for his junior season in 2017 and saw most of his action on special teams. He was suspended for the 2018 season after a DUI stop- he was only arrested after refusing to take a breathalyzer- something both he and the Lions brass insist is behind him and there were no concerns over taking the linebacker in round three.

“We watched some of the early film of his first two years of his university career. We saw some things on special teams and particularly in the box as a Mac backer that intrigued us,” added Hervey.

“He was always flashy and had many plays that he was striking people and making tackles. We felt that he could come in and contribute on teams for us and that it was worth us taking a chance on. We had the chance to speak with him over the last several weeks and getting to know him a bit more. With the positions, we made adjustments to in the offseason, a linebacker at the national position was a priority for us.”

The fourth round brought about some familiar bloodlines with the selection of Western DB Hakeem Johnson at 33rd overall. He is the brother of Lions wide receiver Shaq Johnson. The younger Johnson didn’t play last season due to a torn ACL but was a major contributor to the Mustangs’ Vanier Cup win in 2017 and named an OUA second-team All-Star. Not bad for a kid who didn’t start playing football until the age of 19.

Then, of course, there is the line of scrimmage, always an important piece of the ratio puzzle. Hervey selected Alberta offensive lineman Jonathan Harke in the fifth round (42nd overall) and nabbed a pair of defensive linemen: UBC T-Bird and former Langley Ram Charles Nwoye in the sixth round and Simon Fraser University’s Brad Lyons in round seven. Despite getting into the later rounds at this point, Hervey is of the mind they took care of an important assignment.

“Priority one is always addressing the line of scrimmage,” stated Hervey.

“Jonathan Harkey addresses an area that we feel we need to at the centre position. We wanted more depth at that spot. Last year when there was an injury or two we were lacking depth in that spot. It was important to make sure we were able to address that with a player who has experience playing that position rather than trying to make someone into a centre and hoping for the best.” 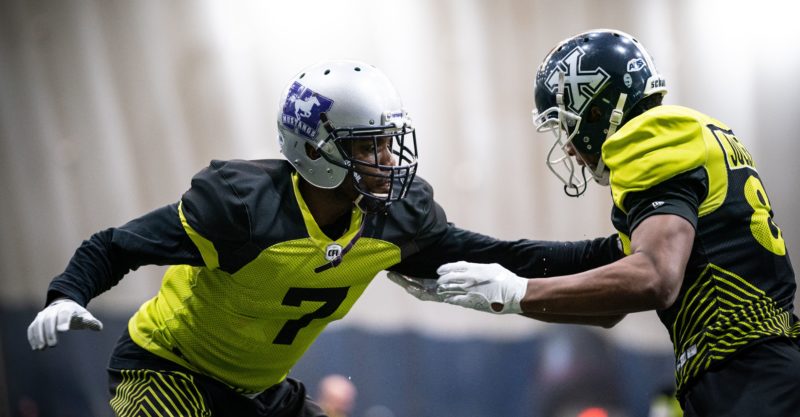 Hervey also addressed the backfield before the night was finished. Laurier fullback Mario Villamizar was taken with their second pick in the sixth round, 51st overall, while they ended the draft by taking Manitoba Bison running back Jamel Lyles in round eight. Overall, Hervey was of the mind he accomplished what the set out to do. Now the challenge is seeing how everyone performs on the field in Kamloops later this month.

“Our objective is to become a bigger, more physical football team and you just can’t do that with small players,” said Hervey.

“That’s just something that we talk about all the time in our meetings. They also have to have the athleticism and the speed to play at this level. When you look at our board, there are guys that are above 6’2 and above the 230-pound area, especially on the defensive side where we are looking to get younger and more dynamic.”

Now the grind doesn’t stop. Hervey and personnel director Torey Hunter were headed to Los Angeles for their next free agent camp this Saturday and will also be in Seattle the following weekend. You can indeed smell football in the air.

“When the Canadian draft is complete, you know you’re rolling into training camp,” added the GM.

“We’re still going down there ( US camps) to find that special talent to invite to training camp and also provide depth when there is an injury. Our team is always hard at work looking for those players. We’re excited about our training camp this year, we’re excited about the many changes that we have and we feel like we’re getting better every day with every move we make.”