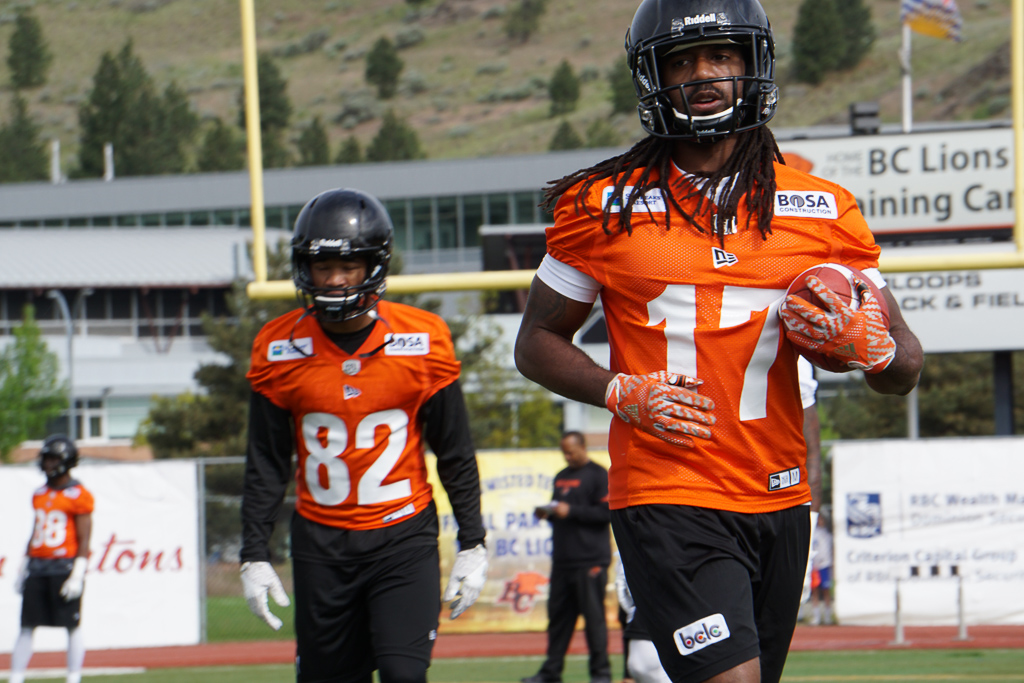 Shakeir Ryan has been long subscribed to the theory that all good things come to those who wait. Whether it was the 63-yard punt return touchdown in Edmonton last week or the 104-yarder to the house as a member of the Hamilton Tiger-Cats before coming to BC last season, the speedster has been known to take advantage of every opportunity; even if those are few and far between. That was something he first got a taste of as a junior at Northwestern State University.

“It was our second game of the season and I wasn’t getting thrown to all game,” recalls the native of Lafayette, Louisiana.

“We were struggling on offence and then our second-string quarterback came in. He said, ‘I’m going to get it to you.’ Up until that point, I was a little upset about not getting the ball. The first play, he throws to me and all of a sudden I was breaking tackles and headed for the end zone and we were only within six points. That was special for me because my family was in the stands cheering for me. It’s all about capitalizing.”

With the battle to return kicks more wide open than the holes Joel Figueroa and Sukh Chungh are creating for the running backs, Ryan has made an impact as we approach the final pre-season tune-up against Calgary this Friday at BC Place. And the man they call ‘Shake’ just might be reaping the benefits of how he has stuck with it since leaving Northwestern State at the end of 2016.

“It’s been good. I had some adversity early on in terms of missed assignments and trying to stay healthy but overall, I’ve loved the experience. I’m learning lots of new things,” explains Ryan.

Like many others here, Ryan’s road to Kamloops had more twists and turns than the classic wooden rollercoaster at the PNE. After leaving Northwestern State, he attended 2017 training camp with the Los Angeles Rams and suited up in all four pre-season games before being sent home as part of the squad’s final cut downs. He appeared in the one game for Hamilton last season before being cut loose when Brandon Banks returned to the lineup in late September. That’s when the Lions scooped him up and he was promptly put on the roster for an October 27th game in Saskatchewan that wasn’t too memorable for anyone on the visiting sideline. If there is a silver lining to any of it, Ryan has used it as motivation to perform well in this camp.

“It always makes you feel a little down knowing that you’re at the bottom of the depth chart and you need to climb all the way up,” he said.

“For me to make plays and show them what I know I can do when I get the ball, that’s just all praise to God right there. (Receivers) coach (Markus) Howell has been great to work with. He helps everybody, whether you’re third string or first string. He takes the time to explain everything. I’ve been around a lot of coaches and he actually cares about the players.” 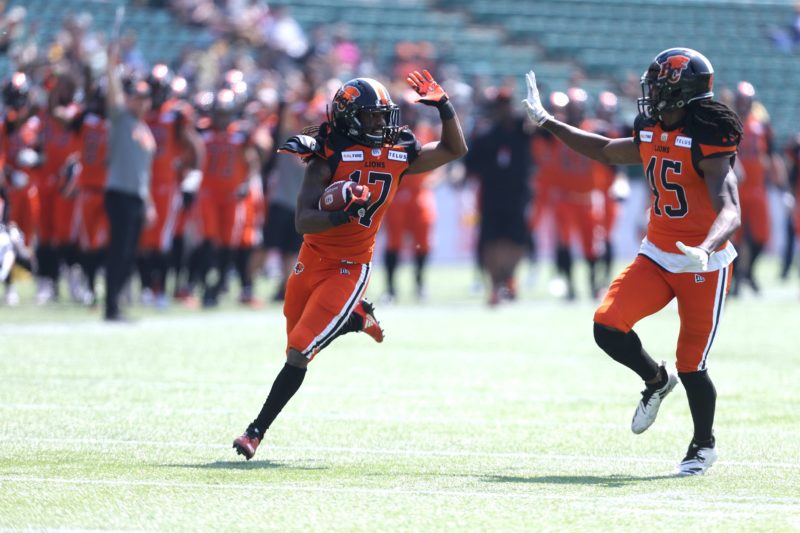 Shakeir Ryan high-fives teammate Steffon Herd on his way to the end zone in a pre-season game at Edmonton on May 26th. Photo: Kyle Clapham.

Football is also in Ryan’s blood. He is a cousin to former New England Patriot and fellow Lafayette native Kevin Faulk and Trev Faulk, a linebacker who suited up for the Arizona Cardinals, St. Louis Rams and New Orleans Saints. Kevin was a versatile running back who was with the Patriots for their first three Super Bowl victories in the early part of the last decade. Having a couple of mentors of that calibre certainly didn’t hurt.

“I’m just trying to follow in their footsteps and continue the legacy,” says Ryan.

“Everybody loves a winner and Kevin competing at the highest level and winning Super Bowls was definitely an inspiration. I wanted to be him growing up. Now that I’m here, the goal is to make the most of this opportunity.”

A self-admitted jokester, Ryan also makes the point of trying to be funny and loosening up the mood when those moments of camp stress start to wear on his teammates.

“I get that from my dad,” says Ryan of his humorous side.

“He was always kind of a clown and had the ability to make others laugh. Being out here and competing every day can become a grind and many of these guys are away from their families, going through adversity and have a lot on their minds. I just like to make guys smile and tell jokes. At the end of it, we just want to enjoy this experience.”

Yet when opportunity knocks, you know his prime focus will be taking care of business. That’s something to watch for as camp breaks and they hit the field one more time before the games start counting in the standings.

“I view it as a blessing being here in Kamloops. I know so many others who would love to be here but didn’t get the chance,” adds Ryan.

When Shake gets loose, watch out.