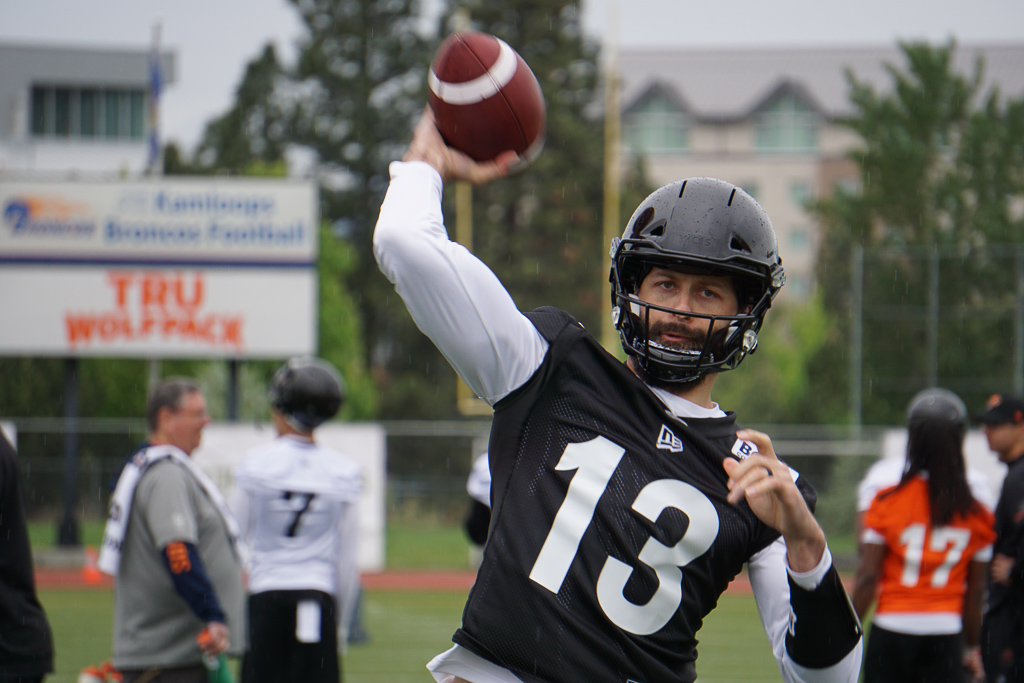 217 days after the 2018 regular season wrapped up, the BC Lions are back home at BC Place for their final pre-season dress rehearsal against the defending Grey Cup champion Calgary Stampeders. While there may not be anything on the line in terms of the Western Division standings, it provides an opportunity for some of the veterans to get some game action under their belt and some of the younger guys to make a last impression before DeVone Claybrooks and his coaching staff make their final roster cutdowns on Saturday. All in all, it should provide a few interesting storylines for fans in attendance on Friday night.

Pre-Season Game B: Calgary Stampeders at BC Lions

Lions last result: a 22-7 loss at Edmonton in their first pre-season tune-up on Sunday, May 26th.

Stampeders last result: a 37-1 win over Saskatchewan in their first pre-season tune-up on May 31st. 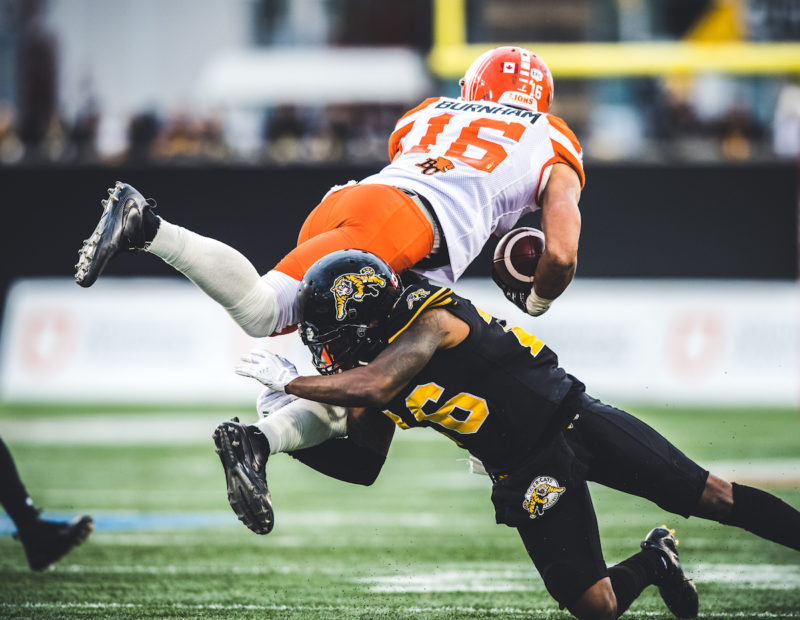 Bryan Burnham (16) of the BC Lions and Cariel Brooks (26) of the Hamilton Tiger-Cats during the Eastern semi-final game at Tim Hortons Field in Hamilton, ON on Sunday, November 11, 2018. (Photo: Johany Jutras / CFL)

Reilly Back Where It All Began

Although he isn’t expected to see more than a full quarter of action, Mike Reilly is slated to be behind centre for the Lions since the 2012 Western Final at BC Place- he completed his only pass attempt for 26 yards off the bench- and make his first start for the club since October 26th of that season.

Whether it means anything in the standings or not, number 13 is treating it as a real opportunity and can’t wait to be back in front of the orange-clad supporters once again.

“It’s been a long time and it will be weird to be in the home locker room,” said Reilly.

“It will be a nice change to be on the home side, for sure. BC Place is a great place to play football games and I’ve always enjoyed it. Empire was fun, but once we moved out of Empire I loved playing indoors, whether the roof was open or not. I always considered it indoors because the wind doesn’t get to affect the ball. But I’m excited. It will be a lot of fun to go out there and play with the guys I’ve been with for three weeks on the field.”

Reilly will start and is expected to play at least the first quarter, depending on how everything plays out.

A Final Audition For Some

Not everyone suiting up has the luxury of their spot being set in stone. Far from it. With Claybrooks and company heading right to the drawing board and trimming the roster down to 75 on Saturday, some of those “on the bubble” guys or players who haven’t had the chance to really stand out yet will get one last chance to do that in live game action. It’s always an intriguing part of the process to see if who can parlay it into a spot on either the active or practice roster for week one of the regular season.

“The thing you want as a head coach is to be able to make the decisions hard. The players are doing a great job of that. If we had come in here and the roster was set and we already know who it is, then we didn’t do a great job of bringing competition into this building. We have some very competitive guys at a high level who can play. I’m excited to unleash and let them go instead of hitting the same colour (in practice).”

A few of the more intriguing battles for starting spots come on defence. Rush end has been quite the competition with Mat Boesen, Darius Allen and Ebo Ogundeko all standing out in camp and the pre-season opener at Edmonton. Field corner and safety will be other spots to watch. On offence, a big question will surround which of the young receivers will be around come next week. Friday’s game depth chart can be found below.

Don’t think for a second that just because this is pre-season, it means the intensity will be down a few notches. Players like Reilly and Bryan Burnham have endured nearly a month of practicing against their own teammates and will want to do everything in their power to put fans and outside observers on notice that this version of the BC Lions will mean business in 2019.

“It’s a football game. If you approach it any other way, you’re in trouble,” explained Burnham.

If there is one takeaway from camp for the six-year veteran receiver, it’s that the addition of a few newcomers on offence wasn’t cause for any rust once the on-field work began.

“These are a lot of guys that I’ve gotten to know over the years, whether it was at CFL Week or just talking to them after a game or the offseason. We kind of got to camp and it felt like we’ve known each other for a few years already. The chemistry has been great, the locker room has been great and I’m just excited for the season.” 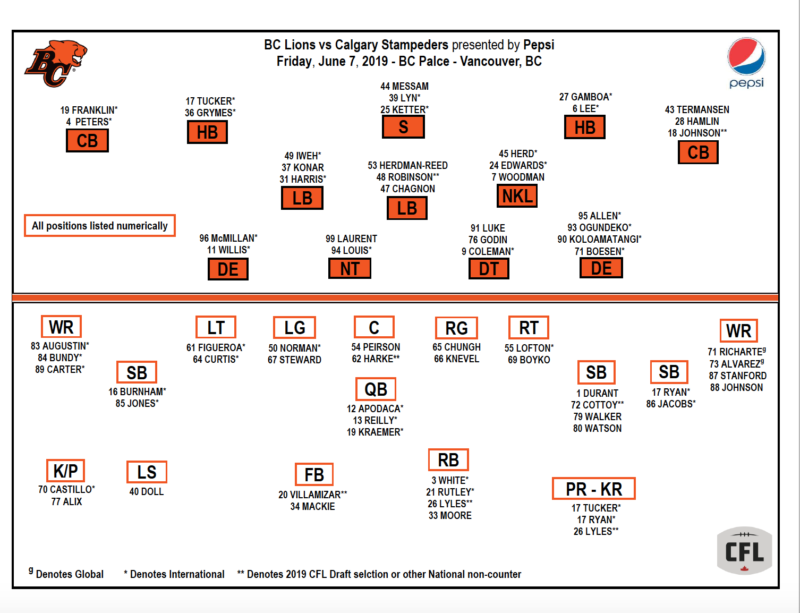 View From The Other Side

It hasn’t been your typical pre-season for Stampeders head coach Dave Dickenson. First, he went toe to toe with his younger brother Craig, now head coach in Saskatchewan, and now he gets his first matchup with Claybrooks. Dickenson’s first year on Calgary’s staff was in 2009, the same year Claybrooks arrived to finish out the final three seasons of his playing career. Like the former quarterback, Claybrooks made the immediate transition to Calgary’s coaching staff (defensive line) after hanging them up as a player.

“My other brother,” joked Dickenson in an interview with Alana Nolan of stampeders.com.

“All first-year head coaches, and say what you want, I’ve been there, they still want to get that win. Whether it’s pre-season or not, you want to generate that culture. I know his guys are going to be ready to play. We do feel like they’ve got a lot of experience over there with their squad and their coaching staff, especially on defence with Stubes. We’re expecting a good battle. It will be good to see him and shake his hand.”

One of Dickenson’s first moves upon being promoted before 2016 was elevating Claybrooks to the role of defensive coordinator. The results spoke for themselves: three Grey Cup appearances with the one victory last season and Claybrooks’ defence allowing the least amount of points as well as being on top of many other key statistical categories over that span.

Claybrooks, special teams coordinator Taylor Altilio, defensive backs coach Ryan Phillips and players Lemar Durant and Maleki Harris will be presented with their 2018 Grey Cup rings prior to kickoff on Friday. Claybrooks spent the last three seasons as Calgary’s defensive coordinator while Phillips was a member of their personnel department. The young Altilio was a special teams assistant under long-time coordinator Mark Killam last season.

TSN 1040 has the action for all BC Lions games in 2019. Coverage on Friday night begins with the pre-game show at 6:00 PM. Bob Marjanovich and Giulio Caravatta bring you the play-by-play at 7 PM. Viewers can watch the game on TSN 2.