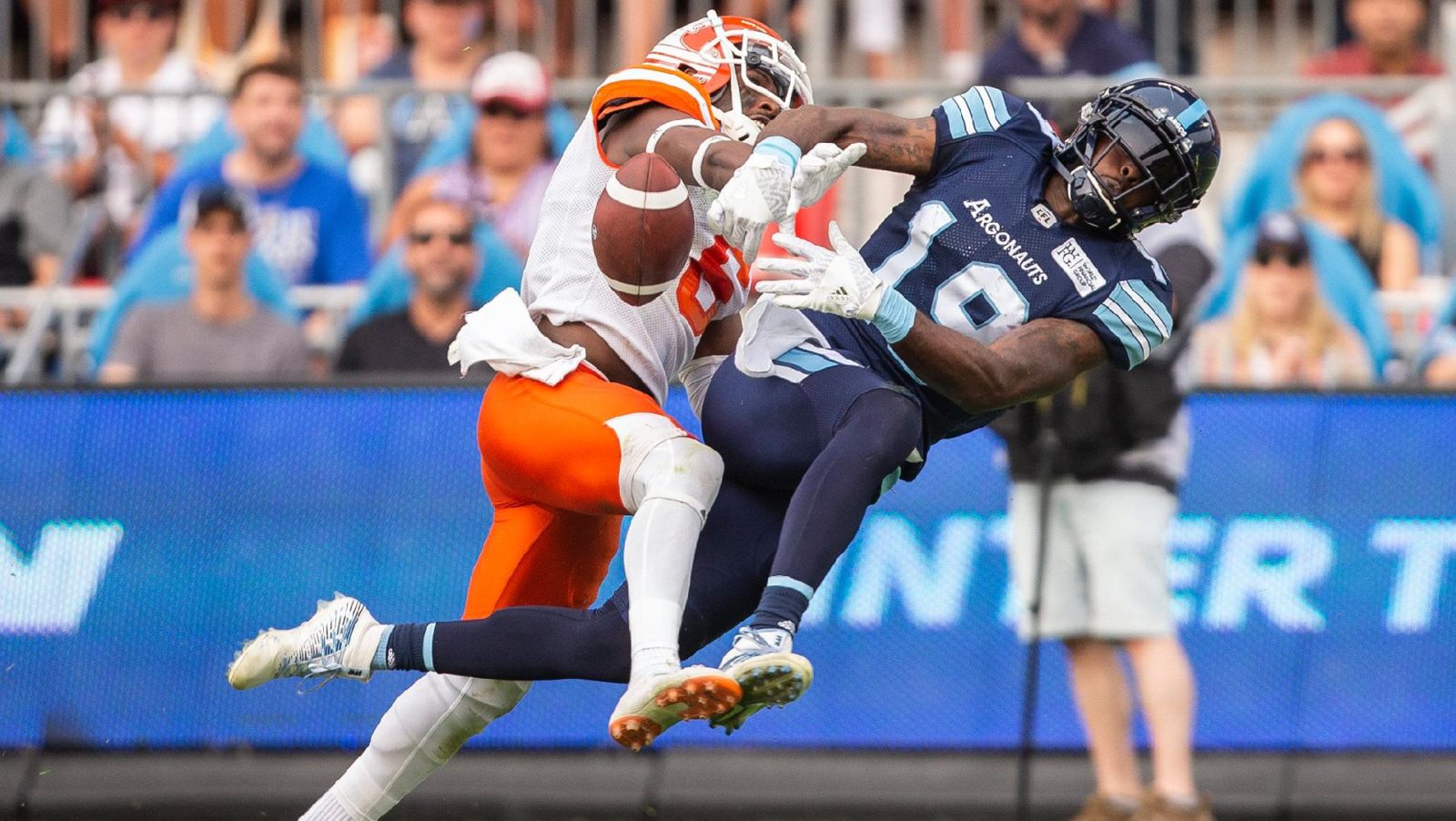 Recent history: These teams split two regular season meetings in 2018 with the home team winning each time. Ty Long kicked seven field goals in the Lions’ 26-23 victory on October 6th. That result snapped a four-game home losing streak to Toronto that dated back to 2014. The Lions have won two of three visits to BMO Field since the Argos moved there to start 2016.

Vegas Line: The Lions are listed as six-and-a-half point favourites with the over/under set at 57.5.

The loss in Calgary was a cruel reminder that you can play lights out for the opening 27 minutes of each half, but it’s what you do inside of the final three minutes that can have a real barring on the result. Case in point, Mike Reilly and the offence driving the length of the field only to be stuffed at the one-yard line on the final play of last week’s opening half. We all know what then occurred in the final 90 seconds of the fourth quarter. Head coach DeVone Claybrooks has been preaching the ’57 plus three’ mentality all week and so far, the players have taken it to heart.

“You’ve got to finish because the last three minutes of each half is like an extra quarter,” said linebacker Chris Edwards.

Although the scores in their games haven’t indicated it, the Argos are likely taking the approach that they aren’t as bad as their 0-2 record indicates. Like the Lions, they have some playmakers on both sides of the ball. Edwards and the defence are aware of that.

“I see a good team, they’ve got some good players like always, but I feel like we’re a better team and we should go out there and get this ‘dub,” added Edwards.

Specifically, for Canadian receiver Rashaun Simonise. The Vancouver College product got most of the practice reps. in place of leading receiver Bryan Burnham who will miss one game after tweaking his ankle in Calgary last week. A second-round draft pick of the Winnipeg Blue Bombers in 2018, Simonise prepares to live out a childhood dream this weekend.

“It’s always exciting to get on the field,” said Simonise.

“Basically, my mindset going in is to execute the plays as detailed and sound as possible and make sure I’m in the right spots at the right time so either I’m getting the ball or I’m opening it up for someone else getting the ball. I’m just trying to do what’s best for the team and ultimately we’re trying to come out with the win so that’s really all (that’s) on my mind.”

Simonise dressed in all 18 regular season games with the Bombers last season, hauling in four receptions for 122 yards.

“He understands the offence, he’s been putting in the time and Markus, Jarious and Chiu have been doing a great job of getting him caught up. He’s been practicing like a pro and he’s been a pro so that’s all you can ask for.”

Burnham’s scratching also came with the consideration of the schedule. It’s a quick turnaround before the Eskimos visit BC Place next Thursday night.

For the second time in as many trips to Toronto, the Lions will face quarterback McLeod Bethel-Thompson. This comes after James Franklin went down with an injury in their loss to Saskatchewan. As far as TJ Lee and the defence are concerned, the preparation and defensive game plan shouldn’t change much.

“We expect the ball to go there. They’re going to do whatever they can to get the ball to him and we need to capitalize.”

“The system is going to be the system,” added Claybrooks.

“I’ve faced Bethel-Thompson before and Stubes has as well so we kind of know what he likes to do. They’re a hungry team as well. We’re both Oh-for and that type so we’re going to expect their best efforts as well as they’re going to get ours. They don’t want to lose at home so we understand that and we understand the dynamics of what we’re facing.”

Lee has been a strong voice in the defensive meeting rooms in the midst of this 0-3 start to the season. In a dejected visitors locker room in Calgary, he basically challenged the group to ‘put up or shut up.’ Based on this week at practice, it appears the message was well received.

“When you put in the hard work, that gives you confidence. We’re building each other’s confidence, making sure we’re clicking on all cylinders and putting in the extra work in the meeting room. That’s the only way to get things done.” 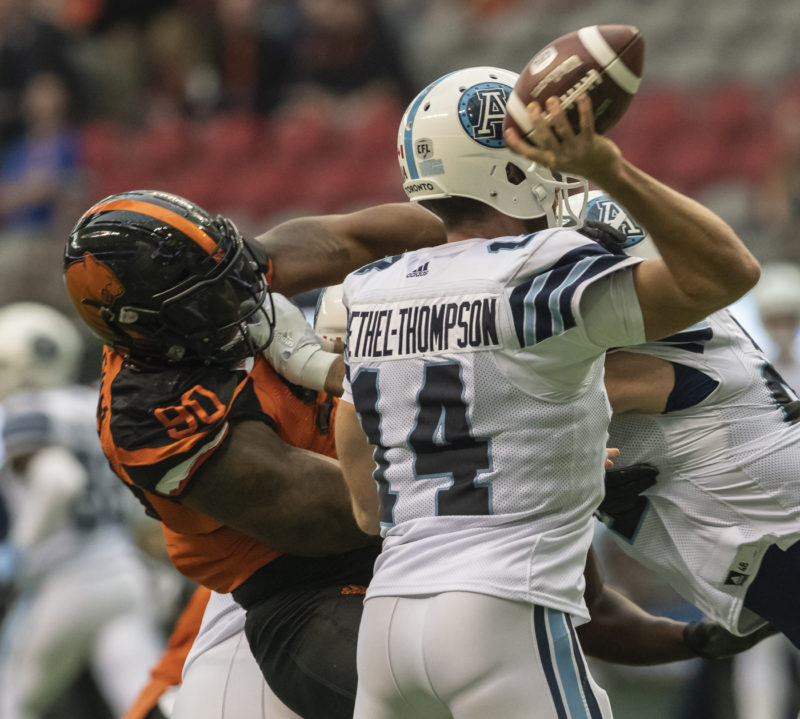 2019 W/L record: this will be Bethel Thompson’s first start of the season after James Franklin went down in Saskatchewan with a hamstring injury. 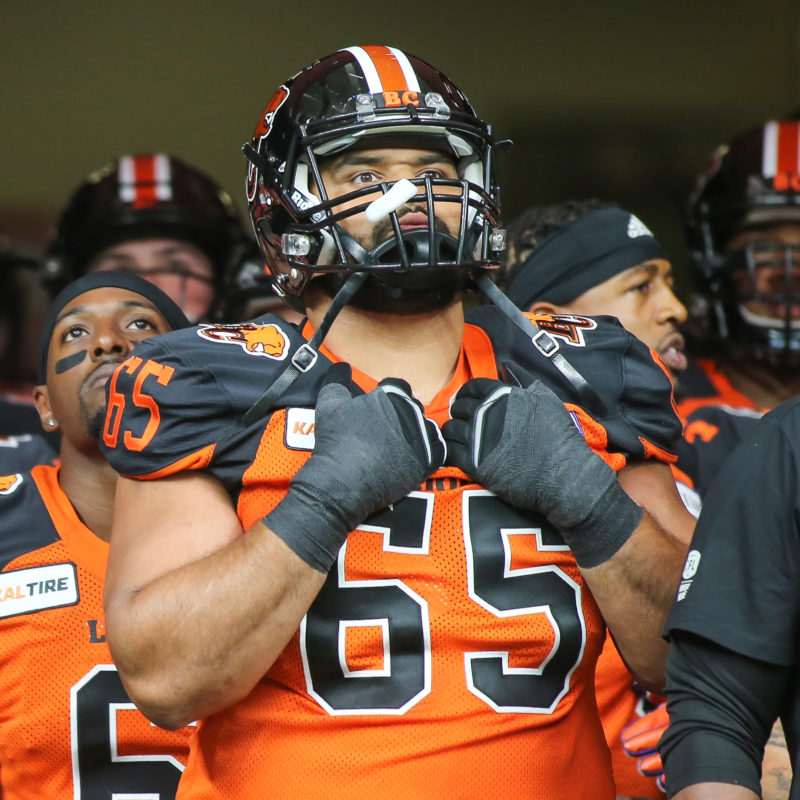 A deeper dive on Reilly’s latest numbers: with two 300-plus yard passing games this season he has now gone over that total 47 times in his career. Last week, the QB surpassed Kerry Joseph for 17th on the all-time league- passing list and sits at 28,452 yards. Next up on the list is Tom Burgess at 30,308 yards.

Brett Boyko is back in the lineup at right tackle after sitting out one week with his ankle injury. His return will see David Foucault slide over to left guard with Jean-Simon Roy remaining in the middle.

The Argos’ new (ish) home digs haven’t been too kind to them. Entering Saturday night, they have a 12-15-0 regular season record since their return to the CNE grounds.

Rain in the forecast? The Lions hope not on a couple of fronts. Chris Rainey departed for Toronto in the opening hours of free agency and is looking to break out in double blue. In two games with the boatmen, he has returned five punts for 81 yards and added 95 yards on five kickoff returns. He hasn’t yet been a factor on offence, hauling in just one reception for seven yards. As we saw for a few seasons here on the west coast, the Rain Man is capable of breaking out at any time. The Lions’ cover units will be prepared for that.

TSN 1040 has you covered beginning with the pre-game show at 2:00 PM PT. Bob Marjanovich and Giulio Caravatta bring you the action at 4:00 PM PT. Viewers can watch on TSN 1, while Lions fans south of the border can stream it on ESPN+, those in Mexico can watch on MVS and fans across the pond in the UK and Ireland can tune in on BT Sport. 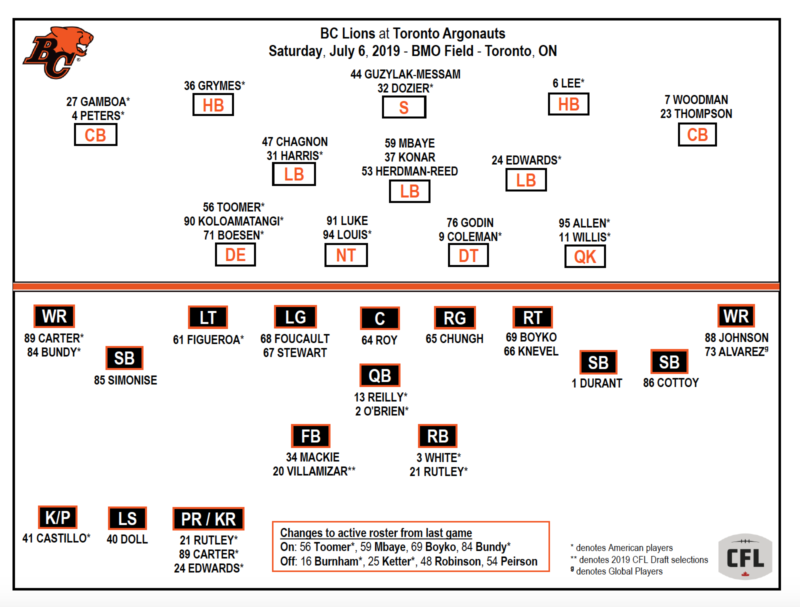