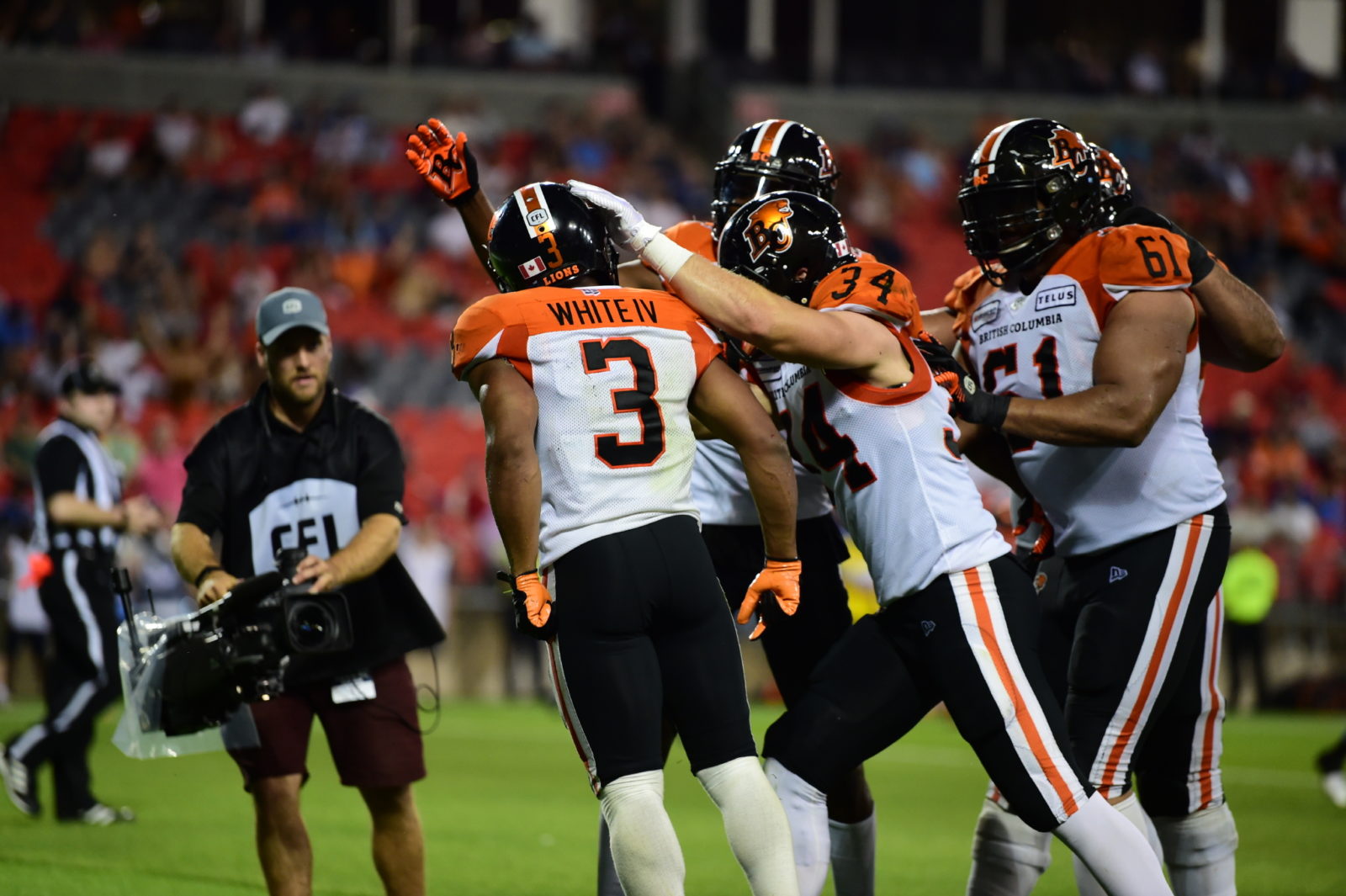 It was a vintage CFL ending, in more ways that one. And it all occurred in the final 40 seconds on a humid and sometimes damp night in Toronto. The hometown Argonauts evened the score with a touchdown and two-point conversion only to see the BC Lions get in position to win the game on a walk-off  ‘rouge’ from kicker Sergio Castillo.

His miss from 42 yards out with no time on the clock resulted in the winning point when former Lion Chris Rainey appeared to step on the end goalline before fetching the kick. The unorthodox result improved the Lions to 1-3-0 on a night where Aaron Grymes and the defence had their best performance yet.

“We won the f**n game, that’s all that matters,” said Grymes.

“We made some plays when we had to, we gave up one (touchdown) at the end there and it got a little scary but at the end of the day, it doesn’t say how you won it just says you won. We’re in the win column and we got to keep it rolling.”

The James Wilder Jr. score was the only major allowed by Grymes and the defence all night, the only other blip coming on a Rainey 79-yard punt return touchdown to get the home side within one point heading to the fourth quarter. The Argos’ two best receivers- SJ Green and Derel Walker- were held to just 39 receiving yards combined.

“Anything worth having in life is worth working for and those guys worked for it and we finished,” said Claybrooks after his first win as a head coach in this league.

“It got a little dicey in the end. We’ve got to clean up our tackling. That’s one thing we’ve been harping on and working on, especially on this field and the grass when it gets slippery and wet as the moisture comes down. They were playing into our hands and throwing those check-downs and things like to Wilder. At the end of the game, we were the nail instead of the hammer. So we’ve got to tackle and not take it for granted that the other guy is going to take him down.”

Without leading receiver Bryan Burnham, Mike Reilly and the offence had their struggles yet the quarterback was able to develop more chemistry with a couple of other targets. Lemar Durant hauled nine catches for 125 yards and a touchdown while John White had another solid outing, rushing for 138 yards and scoring a big third quarter major to give them their first lead of the night. Reilly finished 23/34 for 272 yards and the one TD strike.

“It was kind of the inverse of last week,” number 13 said.

“Towards the end there though, really we had a chanced offensively to put them away and we didn’t. (We) gave them life and then they did a nice job of driving down and scoring a touchdown. Offensively, we’ve got to put the game away, defensively we’ve got to keep them out of the end zone. That’s just what it boils down to.”

The other way of looking at it is, football is a team game. If the offence isn’t doing its thing, the defence can always back them up. That’s what we saw in this one and those who had concerns about that unit’s ability to make stops can be silent for at least one week.

“We understand we made the game a lot tougher on ourselves than it should have been,” explained Claybrooks.

Looking back on this one, most people will remember how it ended: on a missed field goal. Even veterans like Reilly scratch their heads when asked if they ever recall it happening.

“I mean, I remember watching the YouTube film of I think Toronto and Montreal with the kick out at the end of the game. This is the closest that I’ve seen in real life to that. That’s the way it goes. I was prepared for overtime. I was ready to go. You always have to be in this league.”

And as we learned in the end, you can always expect the unexpected.

10– points off turnovers for the Lions; the first-half interception from Anthony Thompson and a Jordan Herdman-Reed forced fumble in the fourth quarter.

10– the number of consecutive field goals made by Castillo after the winning single to end it.

3- turnovers forced by the Lions’ defence. One interception, one fumble recovery and one on downs.

125- receiving yards for Durant who continues to demonstrate his status as one of the Lions’ top playmakers.

156- all-purpose yardage for White when you factor in his 28 receiving yards.

36:50- the Lions’ time of possession. For a second straight week, they owned the opponent in this regard.

Quick notes on Durant and White: Durant is quickly becoming ‘Mr. Clutch’ for an offence that needs to have more than one playmaker at the receiver position. In the last two games, White has given this backfield a dynamic it was lacking in the past couple of years.

Claybrooks also saluted his team for the ability to finish it off, especially after the way it went down in Calgary last week. Those doubts can be erased for now.

Unsung hero: Jevon Cottoy. The former Langley Ram had just three catches for 44 yards, but two of them resulted in extending drives with the Lions in their own territory.

Speaking of extending drives: Reilly was sacked twice but avoided at least a couple more by getting out of trouble and making plays with his feet.

If this defence can churn out more performances like this one, look out.

The Lions are back home to face the Edmonton Eskimos on Thursday, July 11th. Kickoff is 7:00 PM.