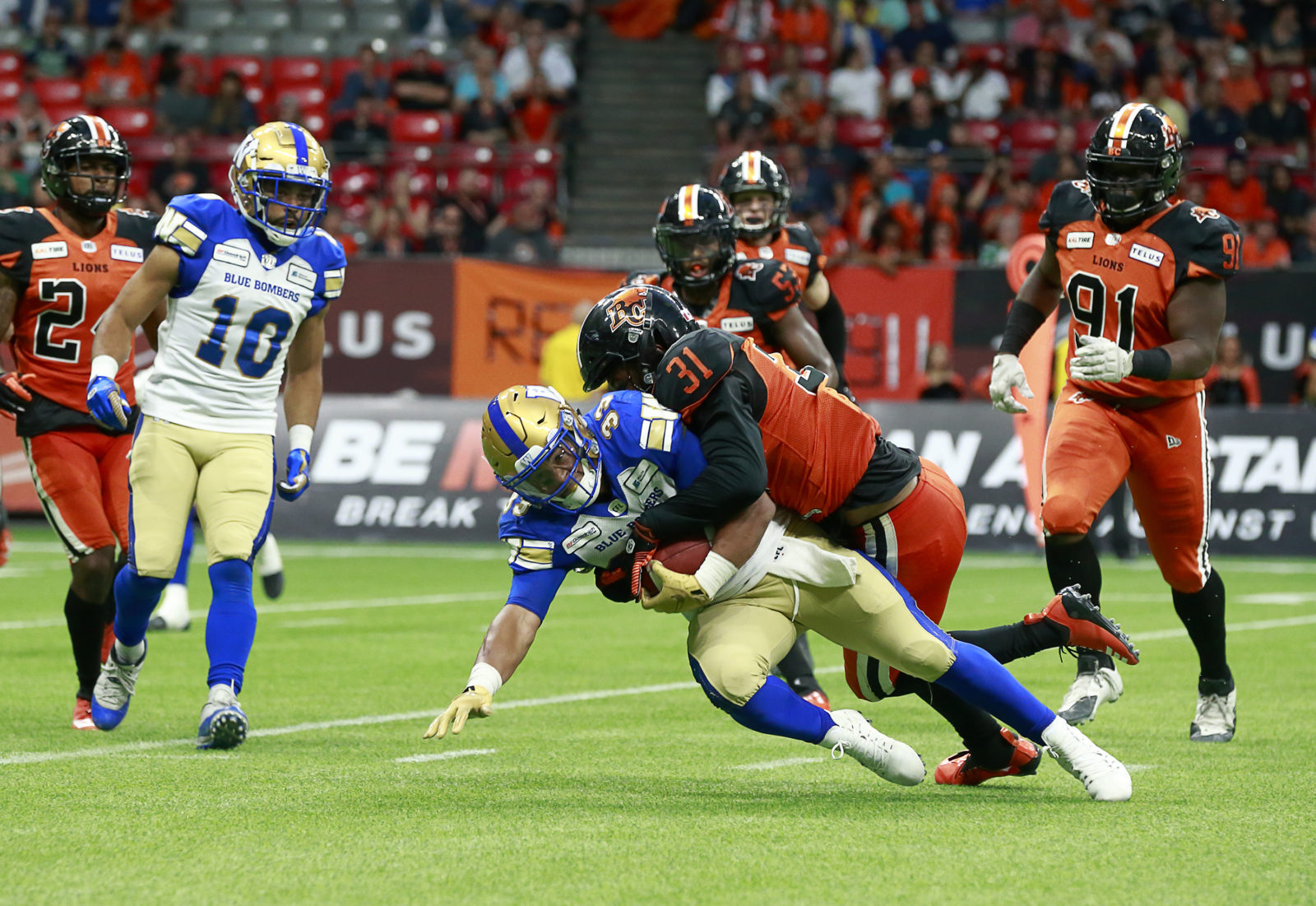 Recent history: The Blue Bombers prevailed 33-23 at BC Place in the regular season opener on June 15th. The clubs split two regular season meetings in 2018 with the home team prevailing in each contest.

Vegas line: The Bombers are listed as 12 favourites with the over/under set at 51.5 points.

Lemon Drops. The Spark They Need?

We’d probably be correct to assume no team in professional football goes three games without registering a quarterback sack without making at least one small change to their defence. GM Ed Hervey responded with Monday’s trade to re-acquire defensive end Shawn Lemon from the Toronto Argonauts. After recording ten sacks in 13 games in his previous stint with the Lions, everyone is hoping to see the same kind of production.

“Like I said, he knows our system and he can just slide right in and play and understand it’s just some new terminology, new calls and new wrinkles, but all in all he’s very familiar with us and he understands what I’m going to be cool with and what I’m not. We’ve got a great standard and a great relationship,” said head coach DeVone Claybrooks.

Lemon is reunited with Claybrooks and defensive coordinator Rich Stubler, the ladder holding that title with the 2014 Calgary Stampeders and Claybrooks cutting his teeth as the defensive line coach.

Despite a 1-7 record, Lemon is coming here with the goal of helping his new/old teammates do some damage and make an improbable run toward a playoff spot.

“Just got to find a way to get over the hump. Like I said, look across the whole league. The whole league, there is no team that is running away from everything right now. Everybody is a few plays away from getting those wins. I just want to come in and be a big piece to help out. You’ve just got to learn from the things you did good and learn from the things you did badly last week.”

2014 draft pick David Menard was also brought back and expected to see some reps. in the defensive line rotation. The move was in response to losing fellow Canadian Edward Godin (shoulder) for several weeks. 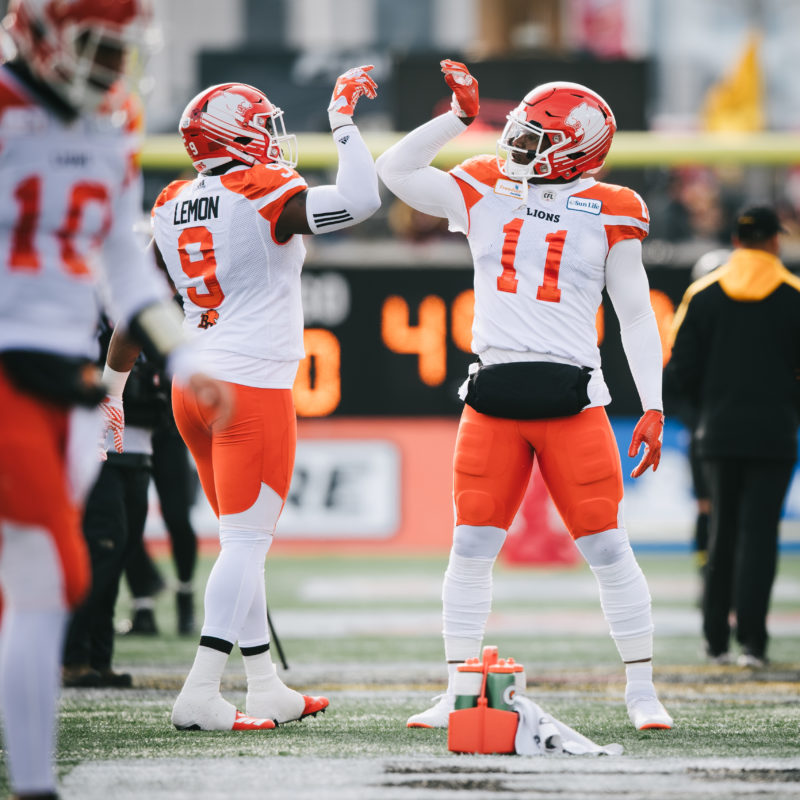 They boast the league’s leading touchdown passer in Matt Nichols, the top rusher in Andrew Harris while defensive back and former Lion Winston Rose has a CFL-best six interceptions. And let’s not forget, their special teams continue to change games no matter who is returning kicks.

At 6-2, the Bombers continue to lead the West Division and have likely been the most consistent squad in this league throughout the first half. You can never give the opposition too much respect, but the collective thought is an upset win on Thursday night would do wonders for their confidence.

“The constant with them is they play good, complementary football. All three phases of their game feed off of each other” said Mike Reilly.

“They generally do a good job, over the last couple of years, of creating turnovers and giving their offence a short field to work with and that’s a benefit for their entire team. So as you look at it from my perspective, you have to protect the football and you have to maintain field position because they do have a very good special teams unit.”

And he also knows how well his old Lions teammate and Central Washington pal Adam Bighill can make a difference to a defence.

“Biggie is a force to be reckoned with, you have to know where he’s at on the field at all times. They have a good front, their secondary plays well together, they work well as a unit. You’ve got to be able to hold up against their front so you can work and stretch their zones and you’ve got to be accurate with the football. ”

As always, the quarterback sums it up rather nicely.

On the other side of the line of scrimmage, Claybrooks is slated to go with the exact same starting offensive line from the loss in Hamilton. By allowing Reilly more time in the pocket and John White the ability to rush for 124 yards and two touchdowns, the big boys up front have erased the critics for at least one week. It’s safe to say that a similar performance will in order should they hope to pull off this upset.

“This is the first time in eight games that we’ve had the same starting lineup as an offensive line,” stated the head coach.

“To have that continuity of where you now how this guy plays this and this guy plays this because you’ve done it together is imperative. It’s imperative for us to be successful on offence and those guys understand it and are gelling well. The trust is getting there and it’s developing so hopefully we can just use that as a springboard to continue to move forward.”

“You want to have that toughness and that grit,” added Claybrooks.

“With him, Figs and Renfrow in there and you’ve got Norman and Foucalt, we’ve got a formidable five that we feel like we can really hold our own with and that’s what we want to try and build off of.” 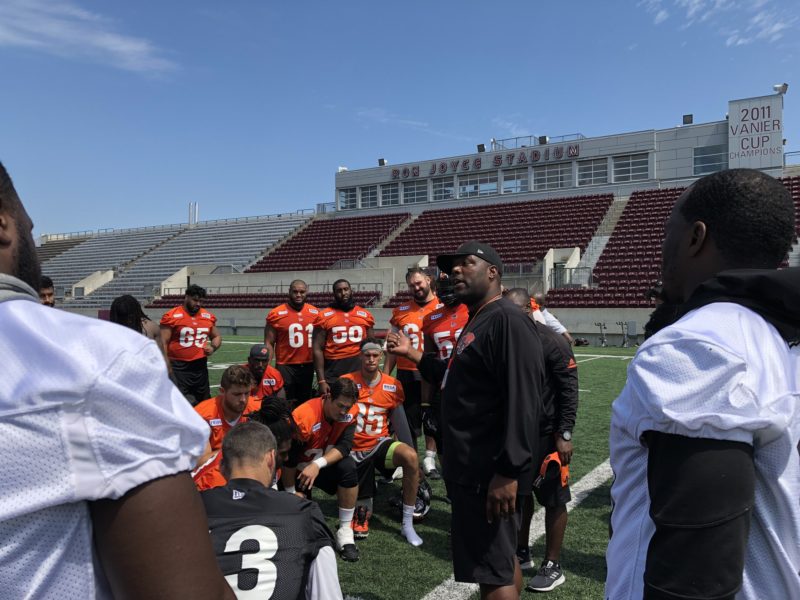 The Bombers will look to continue dominance on their home turf. They are 5-0 at IG Field in 2019 and have won their last eight games on the Manitoba capital dating back to September of last season.

More on that dynamic special teams: Last week, Winnipeg’s Janarion Grant became the first Blue Bomber to return two kicks for touchdowns in the same game since Fritz Hansen in a 1937 pre-season contest.

The Lions will look to avoid being swept in a season series with the Bombers for the first time since 2016. That year, they, of course, would recover to defeat Winnipeg in the Western Semi-Final at BC Place.

According to CFL statistician Steve Daniel, the Lions were a whopping 74 per cent on second down conversions against the Tiger-Cats last week. That is a league-wide single-game total in the league this season. In addition, four of the Lions’ five touchdown drives were at least 74 yards in length.

TSN 1040 has you covered, beginning with the pre-game show at 3:30 PM. Bob Marjanovich and Giulio Caravatta have the call at 5:30 PM. Viewers can watch on TSN 1, while Lions fans south of the border can stream it on ESPN+. Fans across the pond in the UK and Ireland can watch on BT Sport. 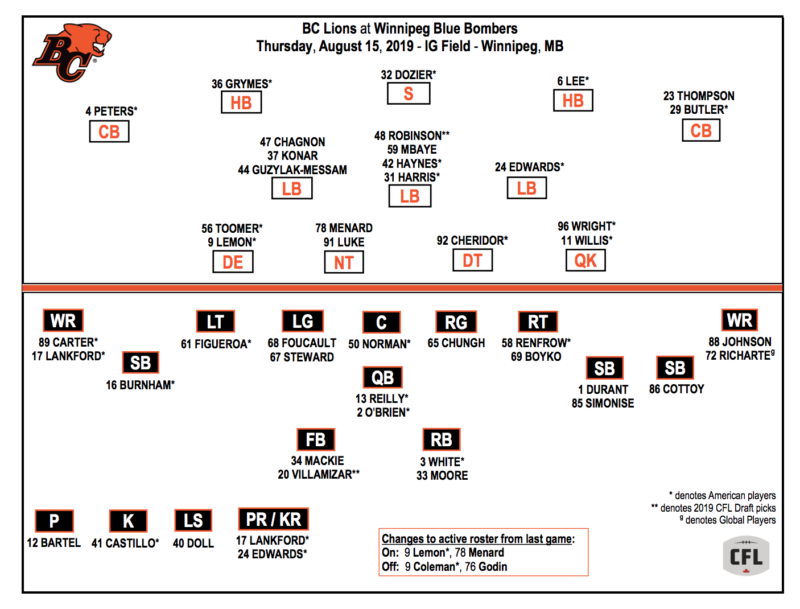