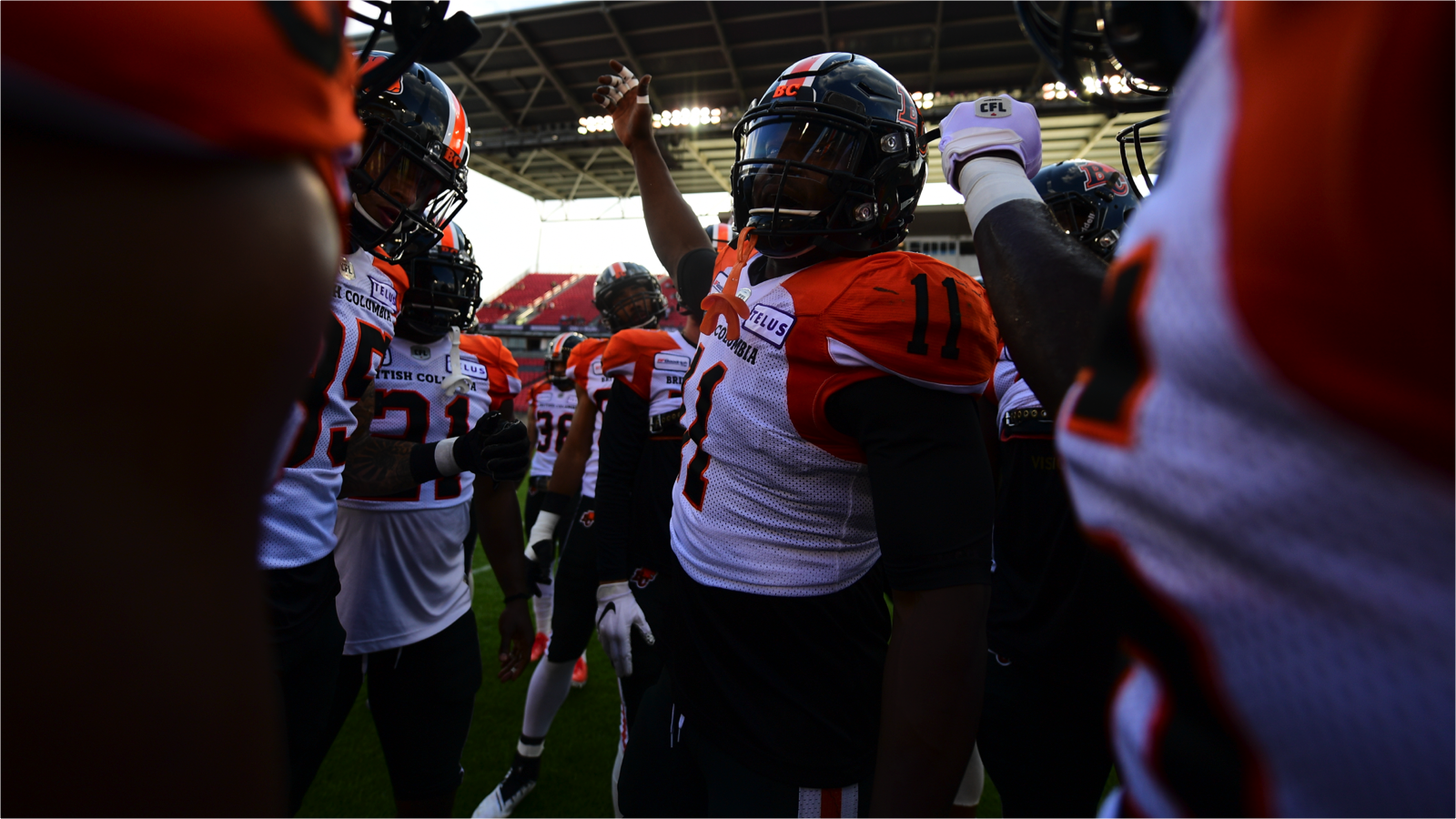 Alouettes last result: a 28-22 road win over Toronto in Moncton, NB as part of Touchdown Atlantic on August 25th.

Recent History: the Lions took both meetings from Montreal in 2018; a 22-10 home victory in week one and then a 32-14 triumph at Molson Stadium on September 14th.

Vegas odds: the Alouettes are listed as four-and-a half-point favourites with the over/under set at 51.5 points.

Big Men Under The Microscope

And that won’t change anytime soon as the offensive line continues under new position coach Kelly Bates. Something had to change in the wake of the 1-9 start. To a man, they all know the dismissal of Bryan Chiu means one thing: the performance is on them and they know that changes may not stop there if it doesn’t improve. At the end of the day, if they can’t protect the quarterback it will truly be a long eight weeks ahead.

“It’s the business aspect of it. We weren’t taking care of business and that comes with the territory,” said veteran left tackle Joel Figueroa.

“Kelly has been around for a while, he’s played in this league, that’s a good thing, and he’s a very smart guy, very detailed. We’re looking forward to playing for him.”

A Grey Cup champion with the Lions as a player in 2006, Bates later coached the club’s running backs and ran the Canadian draft before landing the head coaching gig at SFU from 2015-17. Now he’s back where he belongs.

“I can tell you after meeting the guys in that room, they’re guys that have great hearts, it matters to them and that’s as great a basis and starting point as any,” said Bates earlier this week.

Bates inherits a group that has nowhere to go but up. The Lions have allowed a CFL-high 43 quarterback sacks through ten games. The next highest total is 29 allowed by the Toronto Argonauts. A change was inevitable. This trip to Montreal will provide a nice test.

“They have vet guys, a veteran defensive end (John Bowman) and you know they’re going to be prepared and ready to go,” said Figueroa.

“Just like any other week, you’ve got to prepare the same way.”

Sukh Chungh (lower body) will miss his third game in the last four weeks. David Foucault took most of the practice reps. at right guard. 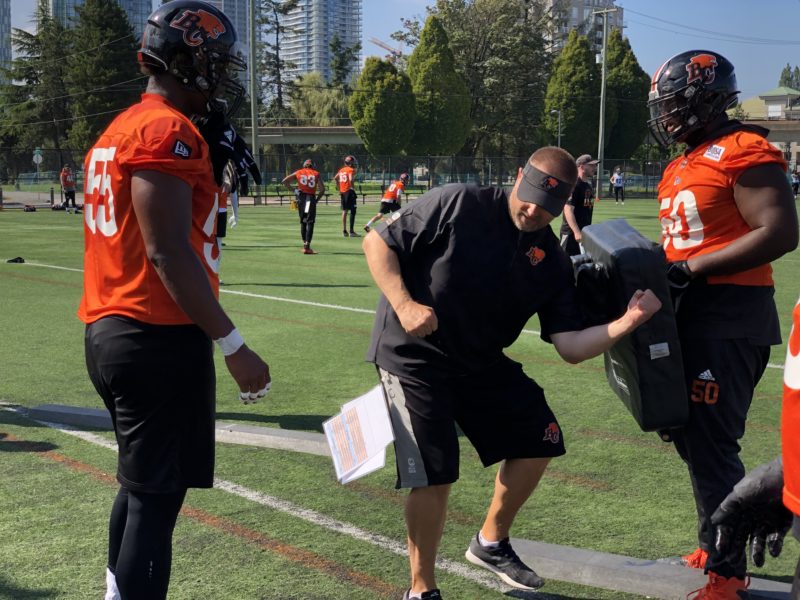 You don’t have to be Isaac Newton to suggest the math isn’t on their side. Entering this week, they trail both the Eskimos and Stampeders by ten points for a playoff spot. Given they have already dropped the season series to Edmonton, the race is more daunting than meets the eye. Still, despite unfounded media reports that the players in the room have quit, all you need to do is spend a couple of hours around the team and you’ll know the urgency is still there. Bryan Burnham and company just want to start winning some games between now and the regular season finale on November 2nd.

“For the most part, I think guys are feeling pretty good. As good as they can be,” explained Burnham.

“Unfortunately, the record is what it is. You’re only as good as your record, but I know what this team is about and I know that we’re a good football team. We’ve been in games, just haven’t been able to finish. For right now, we’re looking at it as a new season. We’re 0-0 right now. We’re going to try to do the best we can and make the best of what we’ve got. I’m almost thinking about the first half as last season. Let’s get rolling.”

If Burnham and Mike Reilly can establish some of the chemistry they showed in the 35-34 loss to Hamilton last month, that would certainly help carry over into the win column. 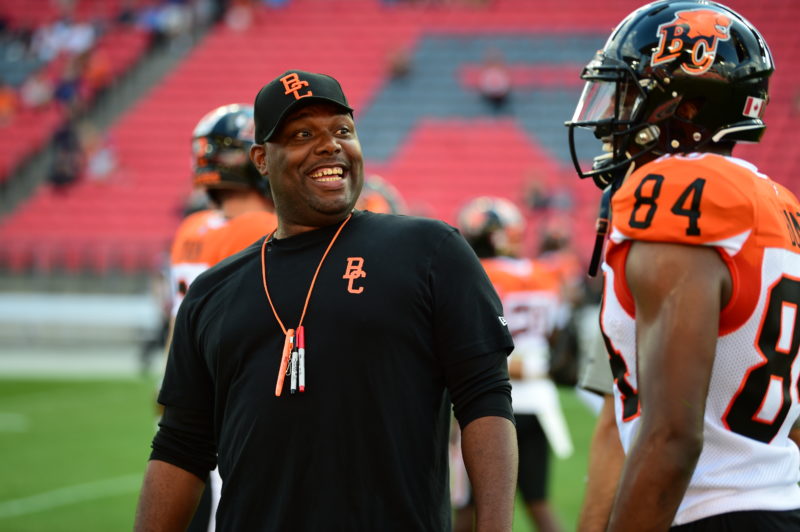 They likely represent the CFL’s biggest first-half surprise of 2019 and could be on track to spoil a lot of pre-season prognosticators’ Grey Cup picks after all signs pointed toward disaster. The CFL was forced to take ownership of the franchise, head coach Mike Sherman was axed less than a week before their opener and they recently parted ways with GM Kavis Reed. Add it all up and a 5-4 has to be considered a massive win for the organization. Former Lions offensive coordinator Khari Jones was thrust into the role of head coach and the players have clearly bought in.

“They’ve got weapons. The thing that makes them a formidable opponent is they play well together, nobody tries to do so much,” said head coach DeVone Claybrooks.

“It’ll be a big test for us but we’re coming off a bye we should be fairly fresh, we have our legs under us and it should be a great battle. We’re excited to go on this business trip to Montreal.”

A lot of their resurgence has to do with the play of quarterback Vernon Adams Jr. After taking over from the injured Antonio Pipkin in week two, the Oregon Ducks product has steered the Montreal ship and proven

“He’s a dynamic quarterback. Most people see him as a runner but he actually has become more of a passer and when he moves he just buys time in the pocket to find guys downfield. He’s not really taking off like that,” added Claybrooks.

Vernon’s favourite target this season has been Eugene Lewis, the pair connecting for 30 receptions, 4473 yards and two majors. Quan Bray and former Lion DeVier Posey have also beefed up their contributions since BJ Cunningham went on the six-game injured list.

The Lions enter this meeting having won seven consecutive games against Montreal, including four straight visits to the McGill University campus. The last Alouettes victory over BC came on August 20th, 2015 in Vancouver when Jeff Tedford was the Lions’ head coach.

If the Alouettes’ surprise start seems remarkable, maybe it’s because it’s been a while since they’ve enjoyed some early season success. Prior to this year, you have to go way back to 2014 to find the last time they were above the .500 mark at any point of their season.

This will be game 100 of Shawn Lemon’s career. In two games since he was required from Toronto, the Lemonator has five tackles and three quarterback sacks.

Backfield shuffle: John White’s ankle injury suffered in the last game will keep him out this week. Brandon Rutley is slated to be the featured tailback. He has 21 carries for 106 yards in seven games this season.

Trivia time: Shaq and Hakeem Johnson will be the first set of BC Lions brothers to suit up in the same game since Mike and Jason Crumb in the 2002 season. Hakeem will primarily have a special teams role in his CFL debut. The Lions selected him in round four (33rd overall) in this year’s draft.

TSN 1040 has you covered, beginning with the pre-game show at 2:30 PM. Bob Marjanovich and Giulio Caravatta have the call at 4:30 PM. Viewers can watch on TSN 1 while Lions fans south of the border can stream it on ESPN+. Fans in the UK and Ireland can watch on BT Sport. 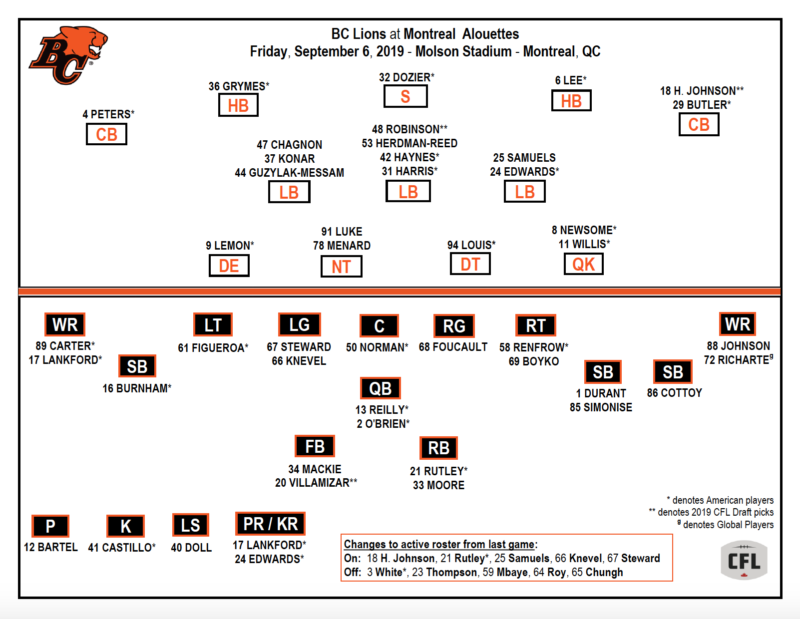