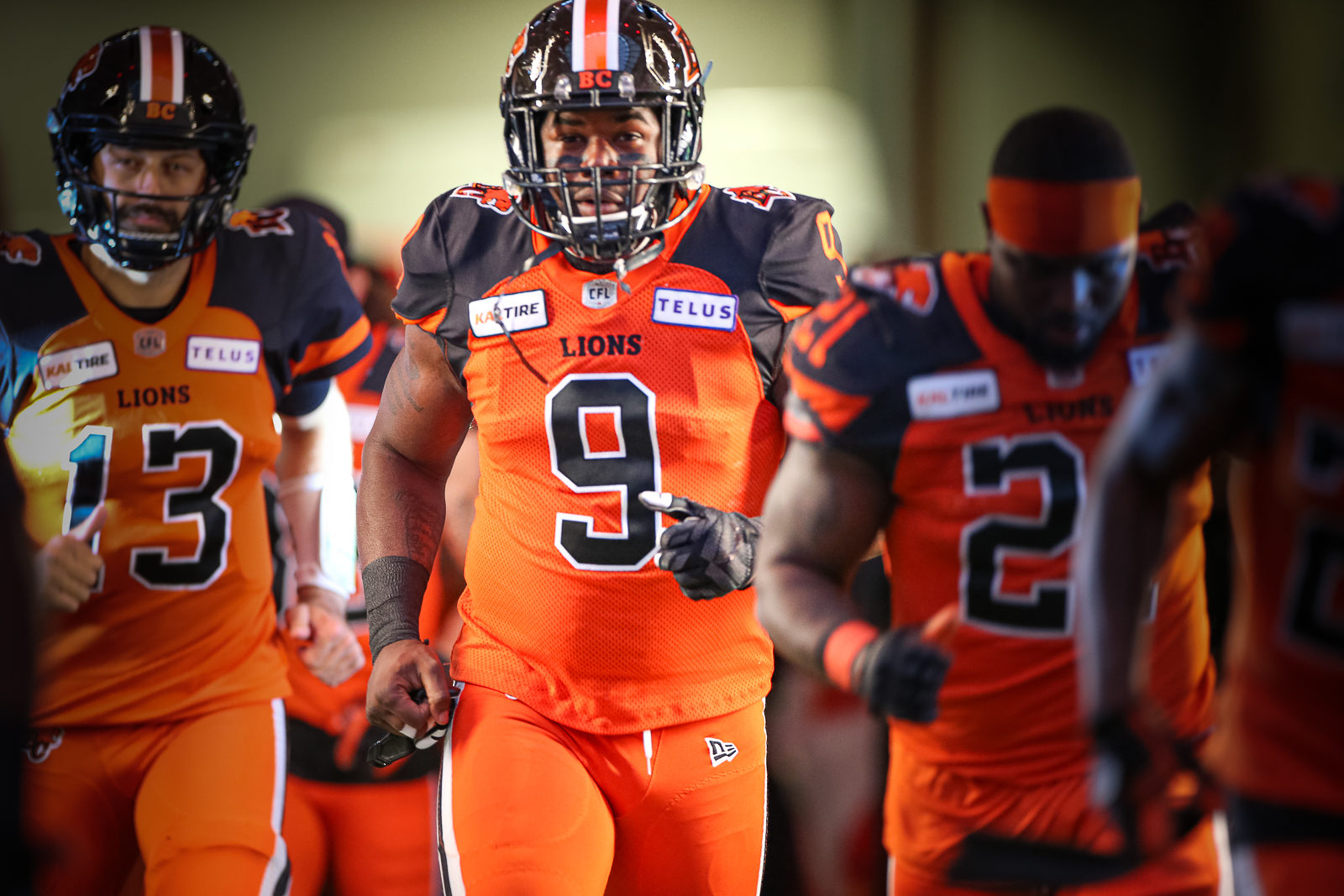 Last week: the Lions prevailed 29-5 over Ottawa in the first meeting of this home and home series at BC Place. The win snapped a seven-game losing streak for Mike Reilly and company, while Ottawa has now dropped five straight.

Vegas Odds: The Lions are listed as three-point favourites with the over/under set at 48.

Regardless of records, beating the same team twice in as many weeks has proven to be one of the more challenging tasks for any squad in this league. Prior to these meetings Ottawa, we looked back at the last ten set of back-to-back series’ the Lions have played dating back to 2013. Of those ten, the Lions swept three of them, split five and dropped both games twice. Add it up and they have a record of 11-9-0 in those games. Respectable, but by no means dominant.

Regardless of history, head coach DeVone Claybrooks expects to see a much better RedBlacks squad this time around. At the very least, he has made sure the players have bought into that message.

“I reiterated the points about playing a team back-to-back in a home and home series and a lot of teams don’t have success on the back end of that, so we want to make sure we’re one of the teams that are bucking that trend,” said Claybrooks.

“We understand that wins are hard to come by in this league clearly, from our record. You can’t get too high, you have to stay focused on the task at hand the journey of what we’re trying to do. Great teams and teams that compete for championships show up every week.”

And stop us if this sounds familiar, but Jonathon Jennings and the RedBlacks will want to put on a decent performance for their fans. After winning their opener at TD Place over Saskatchewan in week two, they have dropped five in a row on home turf.

We know we’ve praised Mike Reilly plenty for his durability this season. But consider this: with his Edmonton successor Trevor Harris on the shelf this week, Reilly is now the CFL’s only starting quarterback to remain behind centre for all of his team’s games so far this season. It’s also worth noting in a week where he missed one day of practice to get his back worked on. As was expected on that day, no issues for the league’s 15th all-time leading passer going into the nation’s capital. And he credits the ability to battle through to what he learned when he first broke in nine years ago.

“I know what I had to go through to get the opportunity to play. Having to sit behind Travis for three years, which is a great learning opportunity, but for those three years, I watched so many other teams around the league have their starters get hurt and guys that had been in the league way less than me get the opportunity to play. I knew when I finally had the chance it was going to have to be something that literally I couldn’t play. That’s just how I’ve always approached it. I appreciate every time that I get to line up, take the snap and play this game. I never take that for granted.”

As for Clarybrooks’ ‘Cheetah Blood’ label, the quarterback can only assume it’s meant as a massive compliment.

“I will not speak for coach Devone (laughs). Generally, I know exactly what he’s talking about but this is not the first, nor it will be the last time that I don’t know.

Say what you want about how it has gone in the standings, but Reilly’s ability to perform well and stay healthy has to be positives for the franchise going forward. Plus, he clearly won’t ever lose his sense of humour. 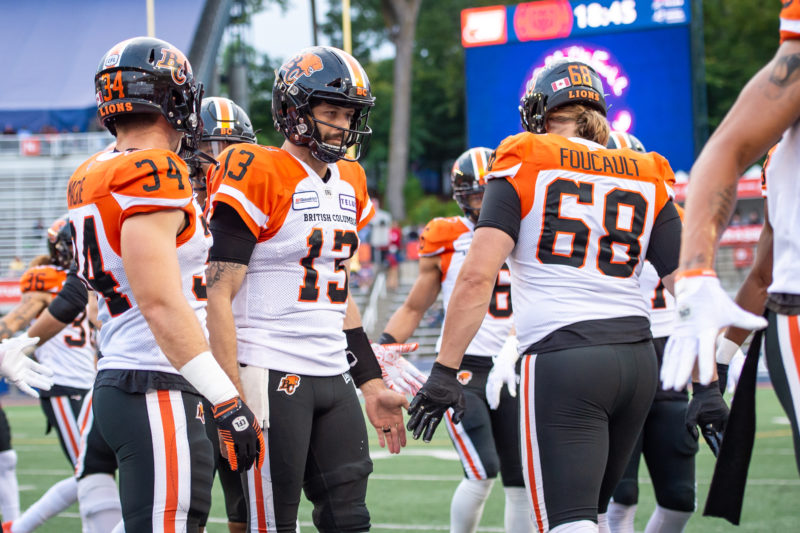 D is For Dominant. Now for an encore

The vastly-improved Lions defence has allowed an average of 309 yards, only four total touchdowns and forced nine turnovers in the last three contests. Are they satisfied yet? Not even close. After making life difficult for Jennings and the struggling RedBlacks last week, they have the template on how to keep him in the pocket and force him to try to beat them downfield. One thing is also certain: this unit has a lot more pepper in the soup since the trade to re-acquire Shawn Lemon from Toronto. Needless to say, they want to be more productive each week.

“We just have to again come out and play fast and put them away early,” said Lemon.

“If you let a team like that with their backs against the wall get a chance early, they’re going to be fighting all game.”

Lemon has vastly enjoyed his second tour of duty in orange and now he just wants more wins.

“Once you have fun and you’re winning, you want to play harder just to keep that winning feeling going. Guys are getting the chemistry down, watching the film and doing the extra things. That will make us play faster.”

They will also stick with an experiment that worked well last week. Jonathan Newsome starts at the quick end position with Odell Willis moving inside to tackle.

“It brings a good package for us as far as speed,” Lemon said.

“It’s guys with a high football I.Q. so it’s good for us to go out there and rush together.”

From the history books: this is the first time since 2003 that the Lions will face an Ottawa team in back-to-back weeks. Led by Dave Dickenson, Geroy Simon and rookie Dante Marsh among others, those Lions scored a pair of convincing victories against the Ottawa Renegades who would ultimately fold their franchise prior to the 2006 season.

The only major change on offence comes with John White taking Brandon Rutley’s place in the backfield after Rutley tweaked a quad at some point during his career-high 110-yard performance. White has healed from the ankle injury suffered against Hamilton on August 24th. He has run the ball 101 times for 559 yards and five touchdowns in ten appearances this season.

Burn Baby Burn: Not only is Bryan Burnham on just 57 yards shy of 1,000 yards for 2019, but he would also be the first Lion to hit that mark in four straight seasons since Geroy Simon in 2011. Burnham is also on pace for a career-high 1,457 yards.

TSN 1040 has you covered, beginning with the pre-game show at 2:00 PM. Bob Marjanovich and Giulio Caravatta have the call at 4:00 PM. Viewers can watch on TSN 1 while fans south of the border can stream it on ESPN+. The game is also televised for fans in Mexico on MVS and across the pond in the UK and Ireland on BT Sport. 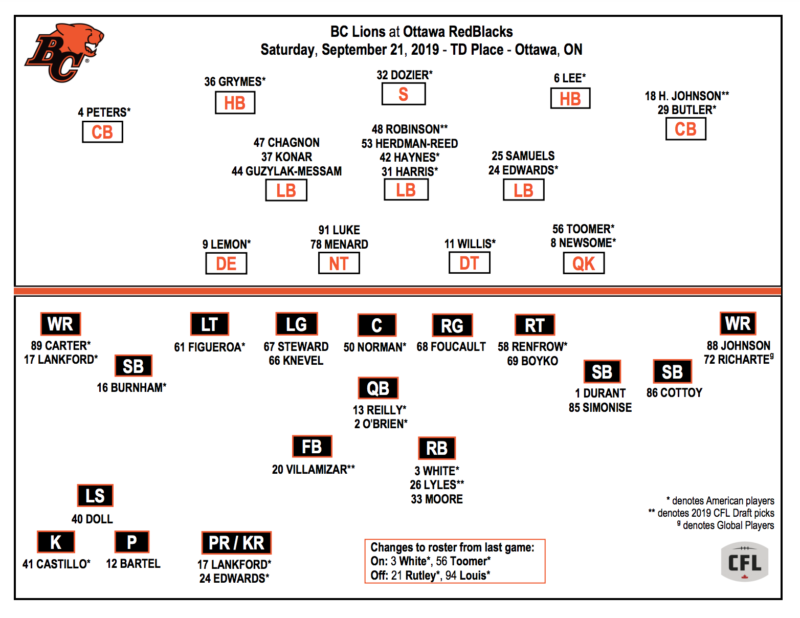