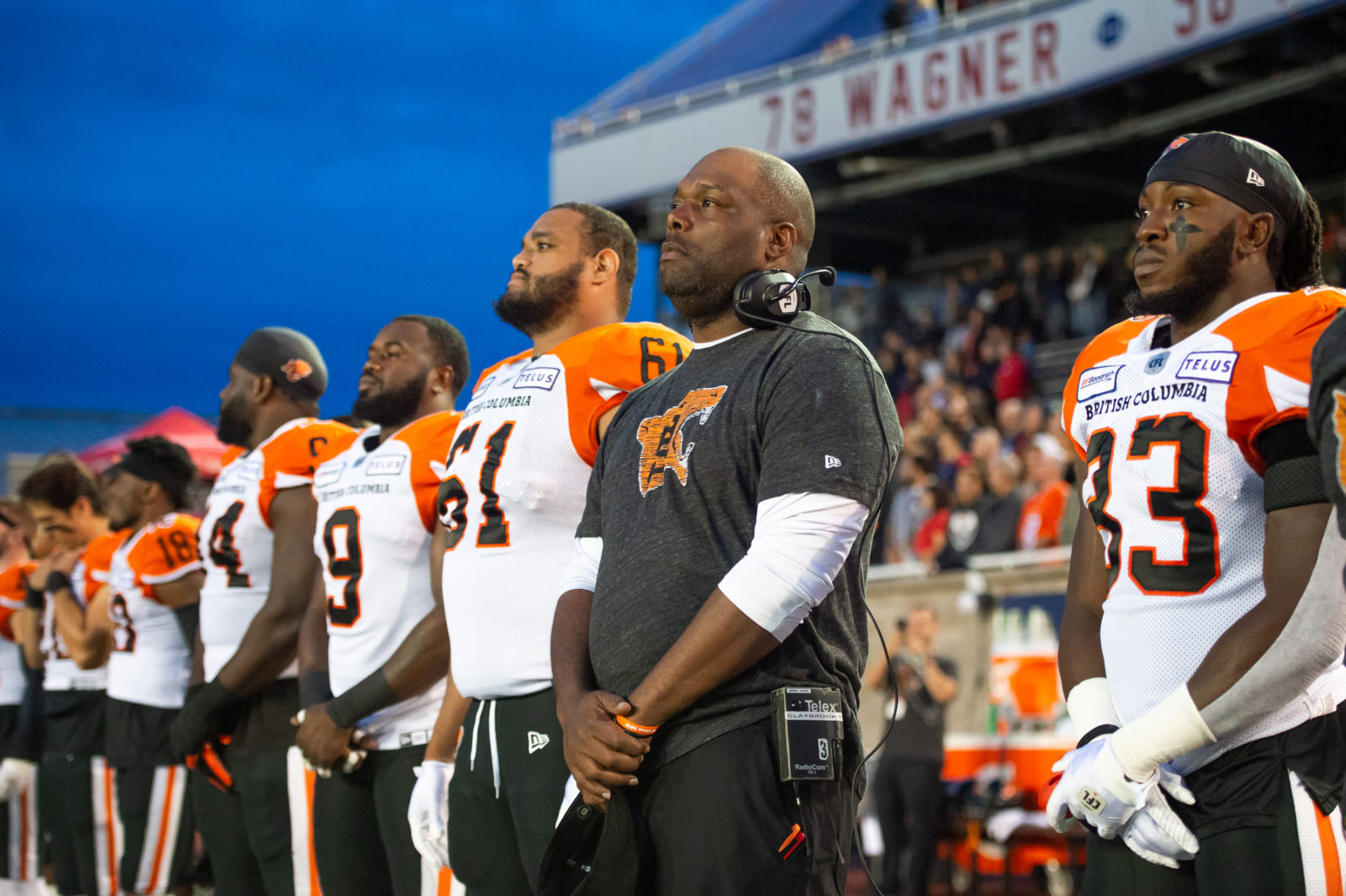 Head coach DeVone Clayrbooks stands with his players prior to a game against the Montreal Alouettes at Percival Molson Stadium on September 6th. Photo: Marc Bourget

Recent history: The Lions dropped a tough 21-16 decision in Montreal back on September 6th. The difference in that contest was the Lions’ inability to finish a couple of key red zone opportunities in the second half.

Vegas line: The Lions are favoured by three points with the over/under set at 50.5.

As cliche as that may seem, it’s all the rejuvenated Lions squad can worry about at this point, even with this two-game winning streak providing a glimmer of hope in the playoff race.

The math is simple: in order to back into fourth in the West and a possible crossover spot, they must somehow end up with at least one more point than the Edmonton Eskimos. With home games against Montreal here and Toronto next Saturday, they can, at the very least, do their part in making an October 12th visit to Edmonton mean something. The Eskimos visit Ottawa and Hamilton in the next two weeks but would have to win no more than one of their remaining four contests for the Lions to have a chance. In talking to the players and coaches, now is not the time for all of these scenarios. Nothing can happen unless they take care of the task at hand, which is beating the Alouettes.

“There’s no point bringing up the record from the past. It is what it is. We just have to keep getting better this week. We come out to practice looking at nothing except for the opponent we have right now. This week it’s Montreal. The only goal is to beat them and, hopefully, other things will just work themselves out.”

Still, it’s fun for us that don’t play to think about the possibilities, is it not? 1-0 this week, rinse and repeat. 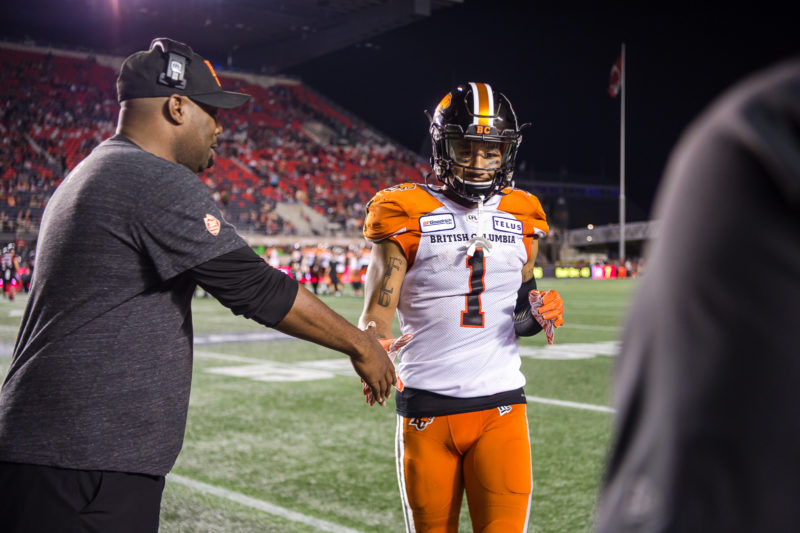 No Adams, No Different Approach

News broke early in the week that starting Alouettes QB and consensus favourite out East for league Most Outstanding Player Vernon Adams Jr. was suspended one game for his altercation with Adam Bighill. The Oregon product has simply been the straw that has stirred Montreal’s drink since he took over for Antonio Pipkin back in week two. This time around, the Alouettes will turn to Matthew Shiltz who has recently overtaken Pipkin as the number two QB on Montreal’s depth chart.

From an outsider’s view, it appears the resurgent Lions’ defence may have caught a break as the squad looks to keep winning games. However, DeVone Claybrooks was quick to remind those observers that this is still professional football.

Said the head coach: “Have you seen our record against backup quarterbacks? I think that’s an easy sell for my guys, to be completely honest with you. We can’t think we’re all this and all that when we’ve lost to numerous backup quarterbacks early on in the season. That has definitely been a point of emphasis and I expect our guys to come out and play.

True, the Lions have let Hamilton’s Dane Evans beat them twice this season and allowed Nick Arbuckle to complete a miraculous comeback in Calgary way back in week three. In Shiltz, the Alouettes do have someone that is familiar with their system. Originally signed by Montreal in April of 2017, his most recent appearance came in a 27-24 loss at Saskatchewan two weeks ago. Members of the Lions’ defence are echoing those statements of the head coach.

“This quarterback is going to be a challenge,” added TJ Lee.

“As long as we’re working, making plays when they come to us and our defence is getting a push up front, it should be a good game.”

As recently as four weeks ago, receivers coach Markus Howell issued a challenge to his position group: somebody other than Bryan Burnham must step up and make plays. Early returns suggest the group has delivered on that challenge. From Shaq Johnson’s 160-yard performance in Ottawa to the heroics of Duron Carter and Durant continuing to add to his best season to date, that balance on offence has been a major key to success over these last couple of weeks.

“Shaq Johnson had a big game and helped us get the ball rolling in Ottawa, Lemar helped us in the run game and caught a lot of jet sweeps; we tossed it to him so they count as passes (laughs) and then Duron got in the end zone and helped us on the big throw down the field. They’re sharing the load and they’re making plays, which is helping us.”

Now the task is to continue with the same plan against a Montreal defence that stopped them short a couple of times in the red zone three weeks ago.

“It’s going to be a collaborative effort from the running game to the passing game and with or without the football,” added Howell.

“We’re asking guys to do a lot in the blocking schemes and in the box helping the O-Line out and they’ve answered that call.”

It’s been the type of offensive output many had expected from the get-go. Better late than never.

That Alouettes defence will be missing one of their best in the secondary as Ciante Evans is out with an injury. 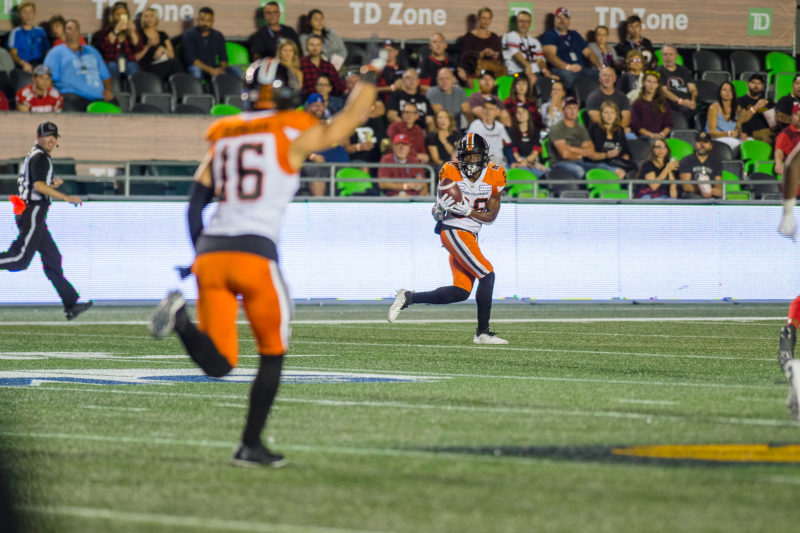 2019 W/L record: Shiltz will make his first start of the season and just the second of his career.

Your Bryan Burnham factoids of the week. He has now moved into the top ten amongst all-time BC Lions with 5,237 receiving yards and sits sixth in all-time receptions with 341.

A solid nugget from CFL stats ace Steve Daniel. Carter was the first since July 12th, 2003 to throw and catch for a touchdown in the same game. The last to do it? None other than Geroy Simon against the Alouettes, throwing a 64-yard strike to Ryan Thelwell along with a touchdown reception from Dave Dickenson.

Second half surge: when you combine this season with all of 2018, the Lions are 8-5 in the second half of the season and just 4-14 in the opening half.

A fast start is key: the Alouettes have scored first in eight of their 12 games and have a 5-3 record in those contests. In addition, the Lions have allowed just two first quarter points in their last four games.

For the first time since we can remember, the Lions will have no changes to their roster from the previous week.

BC Place hasn’t been kind to the Alouettes this century. They have won only two of their last 17 visits to the venue, those coming in 2000 and 2015. The only other Montreal win since the turn of the century came at Empire Field in 2010.

TSN 1040 has you covered, beginning with the pre-game show at 5:00 PM. Bob Marjanovich and Giulio Caravatta bring you the action at 7:00 PM. Viewers can watch on TSN 1, while Lions fans south of the border can stream it on ESPN+. Fans across the pond in the UK and Ireland can watch on BT Sport. 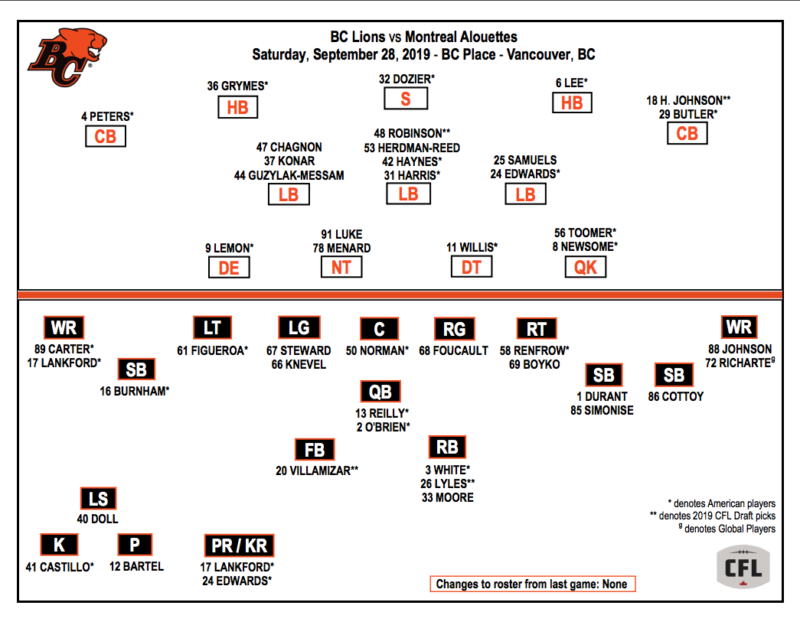