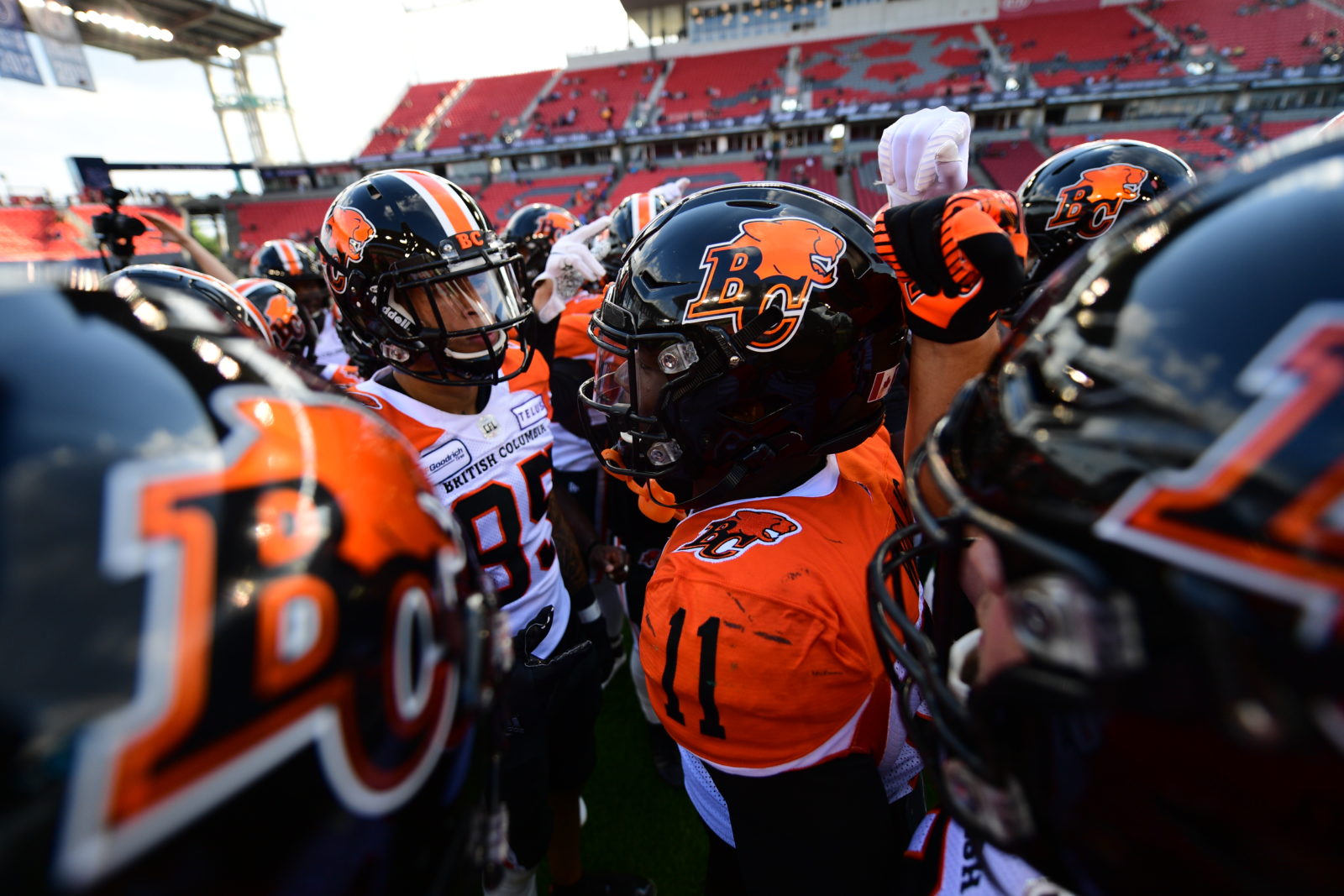 It ended 23 days earlier than members of the organization had hoped when they all reported to Kamloops for training camp nearly six months ago. And when asked to close the book and sum up what went wrong in a 5-13 season- the club’s worst record since 1996- and missing the playoffs for the second time in three seasons, players, coaches and management were left scratching their heads.

With a 1-10 start that saw the Lions drop the season series to three division rivals before Labour Day came calling, it was pretty much ‘curtains’ on a season that began with unprecedented hype after the successful coup to land Mike Reilly in free agency.

The 34-year old was leading the CFL in passing yards when he fractured his wrist in Edmonton on October 12th. After undergoing surgery and having a plate put in, Reilly contends if they were preparing for a playoff game this weekend he would be back out there practising. Instead, it was gathering items from his locker, signing a few more jerseys for club sponsors and getting ready for a long winter in his offseason home across the line in Seattle.

“But it (the injury) was a tough way to end it because we’d gone on a stretch where we felt like we were playing some pretty good football and I was excited to be a part of that and that was a very big game over in Edmonton to have it end four or five offensive plays into the game, you know, that’s the way football goes. People have been asking me all season, not that I’m superstitious about that kind of stuff, but people have been asking me all season about being the only starting quarterback left that was healthy. 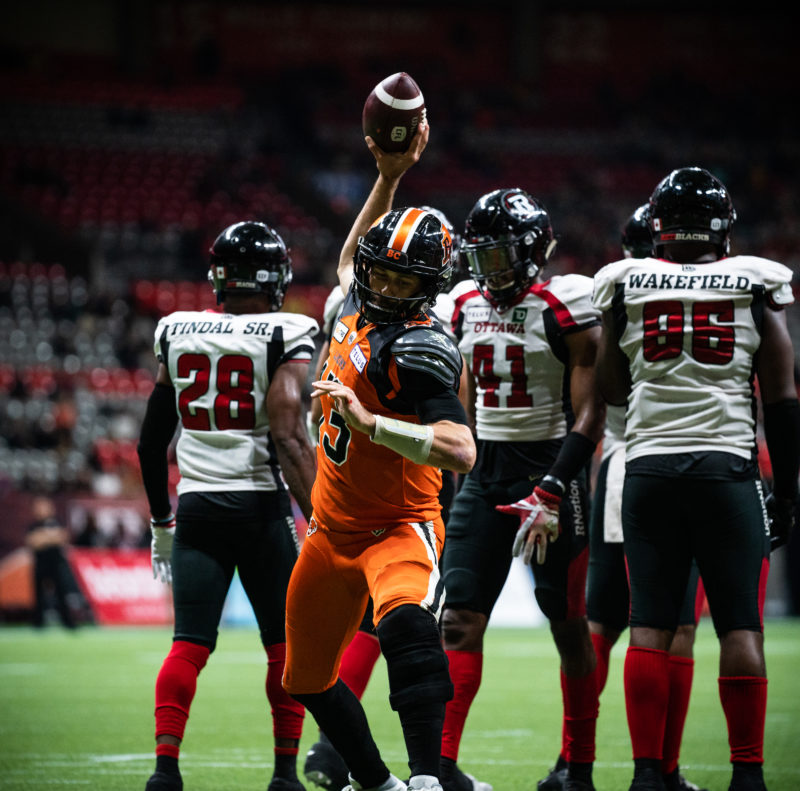 Mike Reilly (13) of the BC Lions celebrates after a touchdown during the CFL game between the Ottawa RedBlacks and the BC Lions at BC Place Stadium in Vancouver, BC, Friday, Sept. 13, 2019. (Photo: Johany Jutras / CFL)

“Basically, everything I said was that you play as hard as you can and you train for it but sometimes there is unlucky stuff that happens and that’s what had happened to a lot of guys earlier in the year and that was my situation, my time. That’s the way football goes and I certainly would have liked to have seen how that game and the rest of the season would have played out if I would have been able to be out there on the field with my guys but it just wasn’t the case.”

And that will be the number one thing the Lions and their passionate fans can feel good about going into 2020: not only will they have one of the league’s top quarterbacks on their side but he continues to prove he is as tough and durable as when he first broke in with the franchise back in 2010. With GM Ed Hervey bracing for an evaluation of everybody on the coaching staff and in football operations- including himself- Reilly and his teammates can only look back at the campaign and ask ‘what if?’

“Improvements and changes have to be made and that will take place over the offseason but yeah, absolutely it’s not good enough. It’s disappointing because you’re excited when the season starts and I say that every year. I say we expect to be a championship team. Every team expects that when you’re 0-0. But that’s why the games are played on the field and not on paper,” added number 13.

Another one of the bright spots is Bryan Burnham. In a year where he notched a career-high 1,492 receiving yards and continued to demonstrate himself as a human highlight-reel, number 16 will use the dismal record as motivation from now until next May. A Grey Cup remains the one big thing missing from his resume.

“First and foremost, it was a failure of a season,” stated Burnham.

“The expectations were much larger, I know what kind of team we have and what we could have done this year but that’s all ‘coulda, woulda, shoulda.’ Personally, I think I had a great year but looking back there is still a lot of things that I could have done better. So I’ll go into the offseason and watch the film, make the corrections I need to make of myself and make sure that those are fixed going into next season.”

With at least 20 players eligible to become free agents and a few glaring holes on the roster, Hervey and his staff will be hard at work over the next several months. When the GM himself was asked what went wrong in his second year in charge, he admitted a large amount of turnover both in player personnel and for head coach DeVone Claybrooks and his staff may have been a bit too much to overcome.

“I’m not looking at this team and saying like ‘oh well, we were favoured to win the Grey Cup.’ I don’t know who did that. That must be Las Vegas trying to get people to bet money. I don’t know what that’s all about.”

“I talked about this last week: 53 new players, 15 new starters, all those different changes, new coaching staff. Does that team win a Grey Cup? Traditionally, people say ‘with the significant changes that you have do you really have a chance?’ Of course, you’re going to believe you do. You have to. In hindsight, you look and say ‘maybe it was a lot of change.’ I look at it and go ‘the change is still for the better of what we’re trying to build here.’ Now we have the continuity. We didn’t have what everyone else had going into last season. It’s just plain and simple,” added Hervey.

Hervey is correct in his personal evaluation of how the team has been built to now. They have the quarterback in place. Burnham evolved into the league’s top playmaker. Both John White and Brandon Rutley benefited from an improved offensive line and gave the running game a physical element it had been lacking in recent years. The defensive line and secondary were major factors in the four-game winning streak after Labour Day. And last but not least, the Canadian content is better than it has been in years after Lemar Durant and Shaq Johnson both had career years. Four of the five Canadian draft picks from 2019 that made the squad saw game action. It begs the question: are the pieces in place to be a contender in 2020?

“No, but there is never going into the offseason because you’re always trying to improve and if you don’t, then you’re going to fall short,” explained Reilly.

“There have to be some different pieces brought in. But I felt that way after 2015, being part of a Grey Cup championship team. You know you’re team is going to be different the next year, no matter what. Any time you win five games in a season you have to figure out a way to get better and bring a few pieces in because if you just go with the same exact thing you’re not going to have different results. We all know that.”

Buckle up. It won’t be an offseason without storylines.