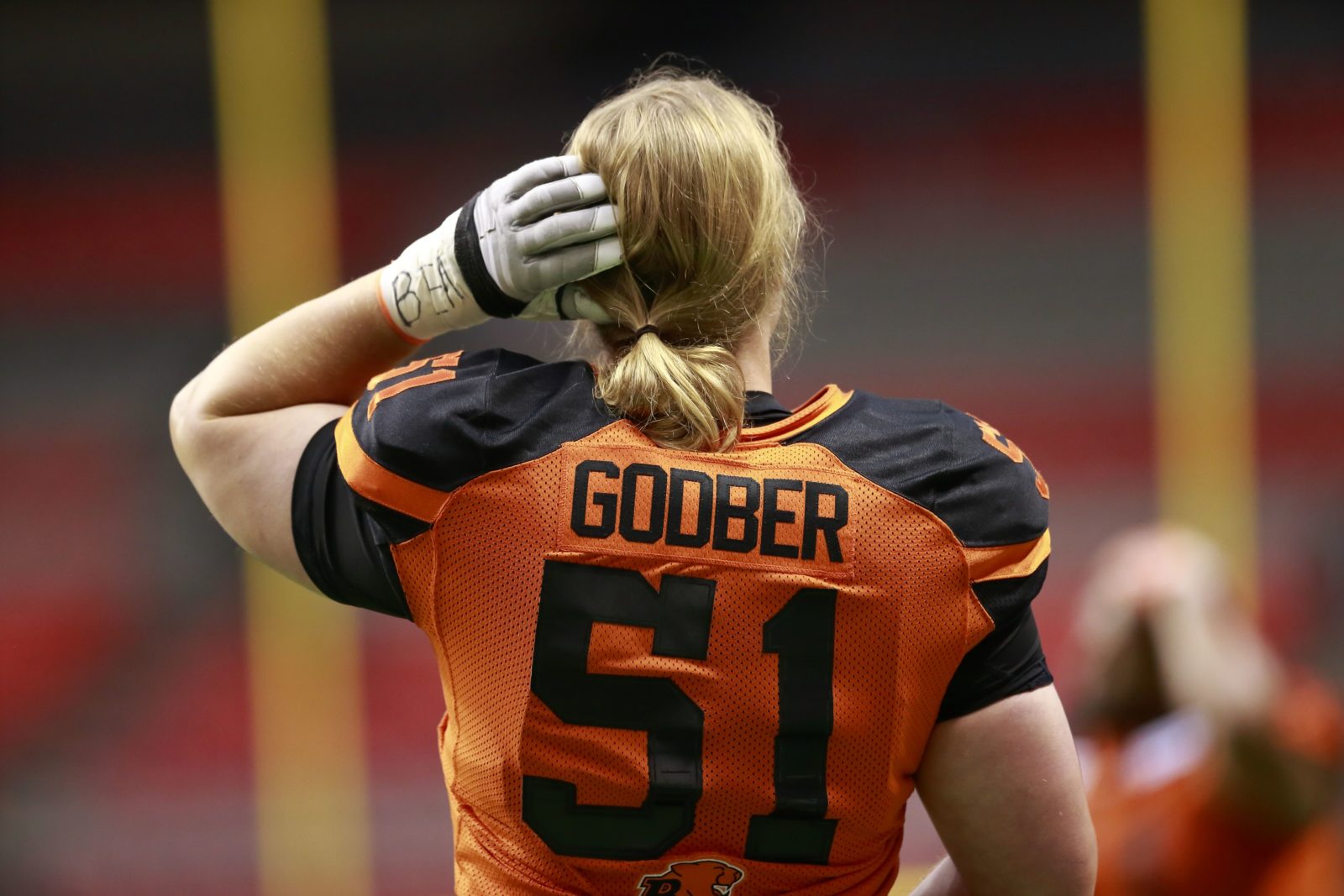 It was Canadian music icon Alanis Morrisette who shot up the charts with her hit song “Ironic.”

Drafted third overall by the Lions out of Rice University in 2018, Godber passed the necessary test of his first pro camp with flying colours. Beginning his rookie season as a reserve on the line, he would have to wait until September 14th of that year to make his first CFL start; when now-retired centre Cody Husband went down with an injury of his own.

Two weeks later, it all came crashing down when he suffered a broken foot in an ugly loss at Hamilton. Injuries happen, right? Sure. But what followed would be a true test of Godber’s ultimate character. 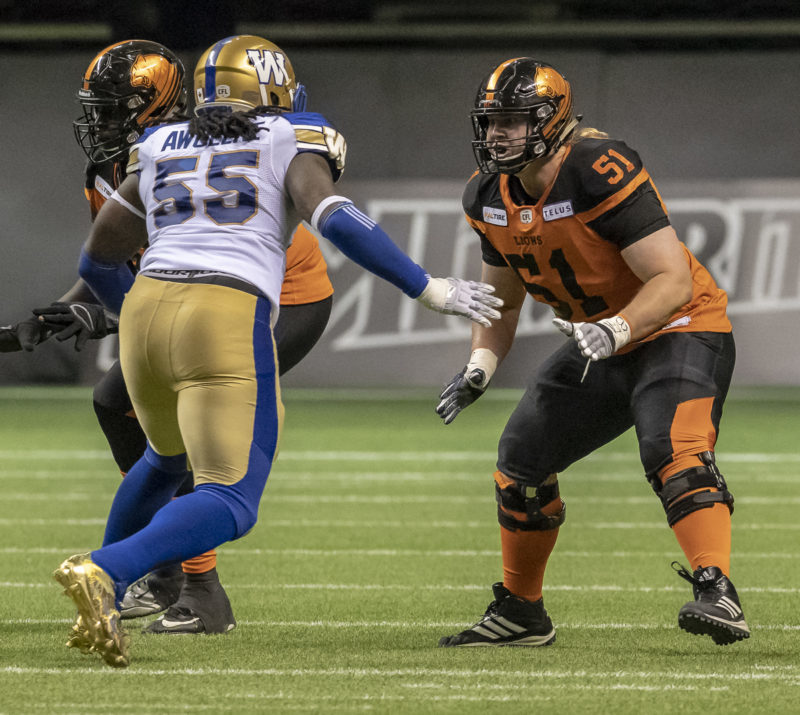 This time a year ago, he appeared on track for a training camp return. This after Dr. Kelly Apostle had successfully fixed the sesamoid bone and re-attached the tendon that ran through it. As Godber explains it, you would come away thinking it was the definition of a freak injury.

“There is no true timeline for an injury like this because it was such a rare surgery,” said Godber from his Surrey apartment on Wednesday morning.

“The sesamoid bone is very small. Essentially, my toe got separated from the others in my cleat. I got pushed back by a d-lineman and the cleat got stuck. The tendon ripped the bone right off the foot. My surgeon hadn’t fixed a problem quite like it so she called around to get different opinions and not many others had done it either. Add in the fact I am a lineman, it was kind of an unknown state.”

Therein lies another problem: a man of normal size and stature likely could have recovered easier. Godber’s 6’4, 310-pound frame would naturally put a little too much pressure on the surgically-repaired foot.

Now is where you can cue up that music. Imagine that if you will. A driven young man who spent most of his life bulking up and maintaining his physical stature in order to stay on the football field was now going through a setback in part because he was too big.

“I definitely think my size was part of it. That didn’t help anything. It was a relative unknown for everyone involved in the process,” said Godber.

When Godber reported to the practice facility for pre-camp physicals last May, the tendon still hadn’t fully stretched out. He could barely move his foot without experiencing pain. Team doctors told him it would still be a few months before they could clear him for action. As a result, he started and his second pro season on the injured list before being activated for the regular season finale on November 2nd. 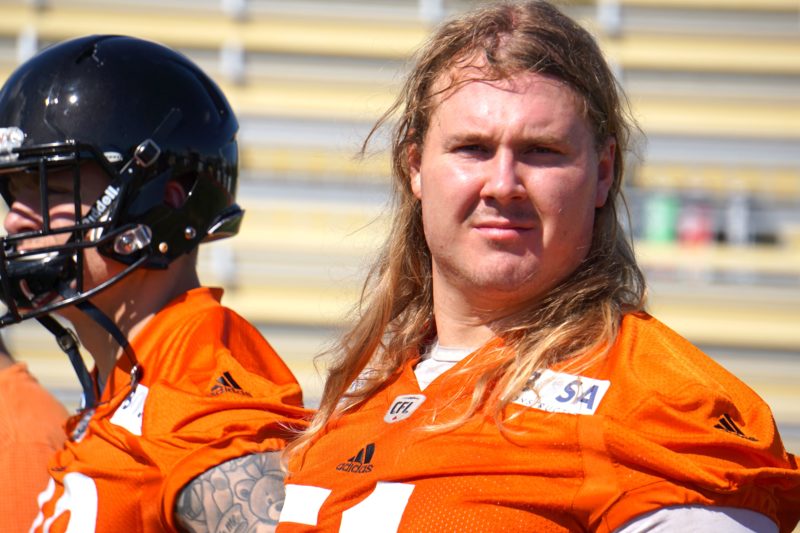 Through it all, he vowed to come back better and stronger than he was before. Six full months of training and consulting with team physicians followed. It couldn’t have been much fun being around the team every day during a very difficult season and not being able to contribute. That would eat at any true competitor.

But now with 2020 camp just four months away, Godber is inching toward the summit of being a full-time player again.  After one heck of a climb, he says it’s a credit to everyone who has helped him along the way.

“I can’t say enough good things about the training staff here in BC. (Therapists), Tristan (Sandhu) and Chris Wong have been excellent. I met with the doctors at every home game and we were impressed to see the progress. At the end of it, one of our docs pulled me aside and told me to buy the surgeon a Christmas card because none of them thought I would easily make it this far.”

Now that he has, it’s all eyes on Kamloops. Truth be told, Godber is approaching it like he is a rookie all over again, looking to pass those same gruelling tests. With a new head coach in Rick Campbell, that’s an easy mindset to adopt in his hopes of emerging as a starter at whatever position they need.

“I feel I can play at all three spots inside, whether that’s centre or guard,” said Godber.

“I think centre is the best position for me, but that’s not necessarily my decision. It’s up to the coaches. I’ll be ready to play wherever they need me to play. I just want to be on the field. No matter what year I’m in, I’ll always have something to prove. This is not how I thought my first two years in the CFL would go at all. I’m hungry and I’m going to keep working hard.”

Another big difference compared to last winter is the fact Godber is living and training in Surrey with a bunch of his teammates. Last year, he opted for the warmer and dryer climate of Houston where he had kept a home since his University days.

“Being around guys like Sukh Chungh, Joel Figueroa, Hunter Steward and my housemate Phil Norman has been great. That competition in the weight room pushes all of us. Add in the fact that coach Bates is here, we’re going to know a lot of the stuff we want to do before we get to camp.”

The other benefit of being in town is the chance to get out in the community and give inspiring messages to school kids at the club’s annual round of visits across the province. It’s something near and dear to his big heart.

“Growing up in Toronto, I looked up to the Argonauts players. Whenever they had a community outreach thing, I was excited to meet them and hear them talk. I closely paid attention. To be in a position to give back to kids who are now in those shoes and looking up to a professional athlete, it feels great. I can’t wait.”

As important as it is to give back, nothing will compare to the sound of banging pads in his first live practice.

“I’m glad this whole process is behind me, I can definitely say that. I’m glad I can look forward to playing football.”

And with an organization that has greatly improved its Canadian content in the last couple of years, there would be nothing ironic about a successful return.