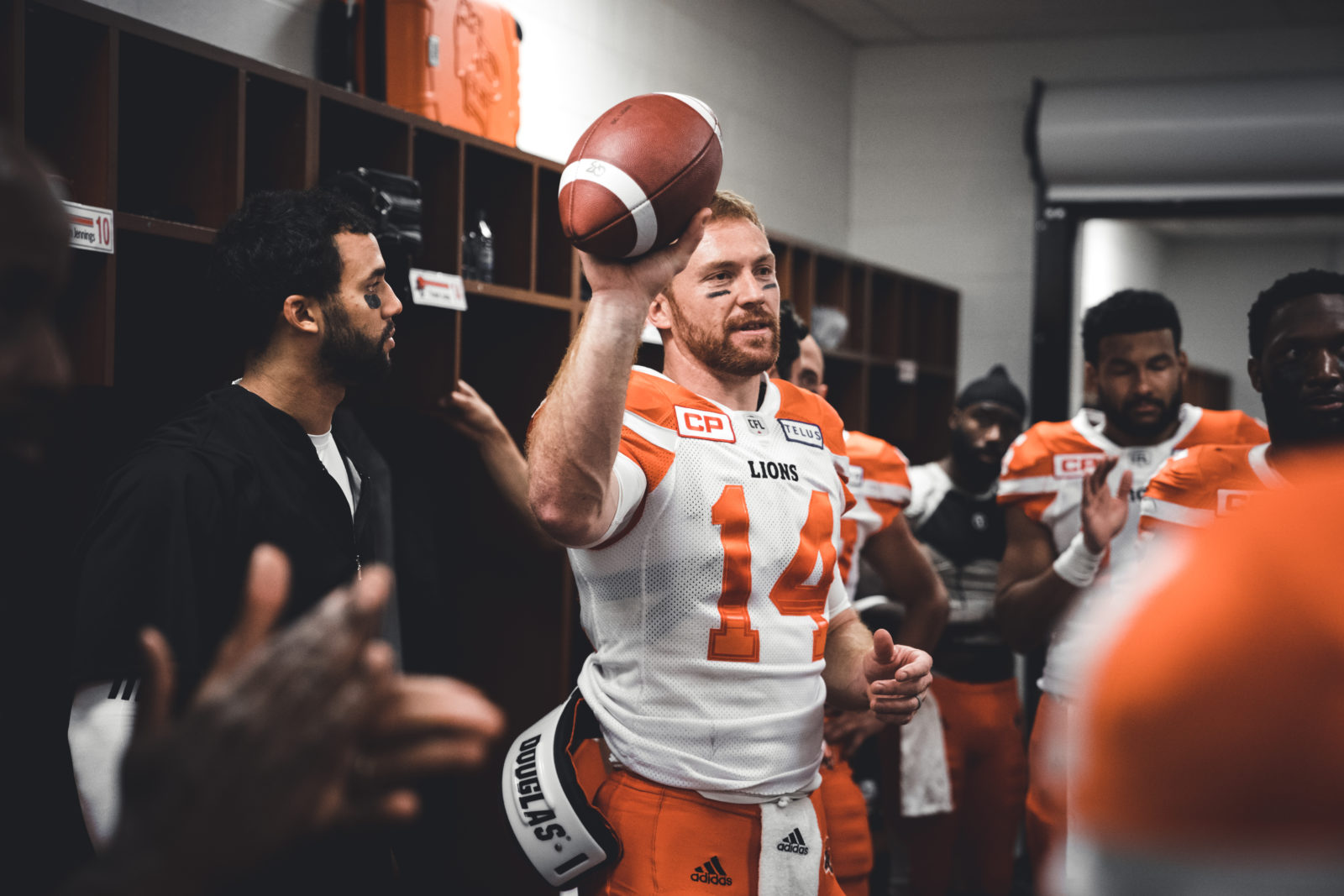 Jonathon Jennings (10) and Travis Lulay (14) celebrate in the locker room after a win against the Hamilton Tiger-Cats after the game at Tim Hortons Field in Hamilton, ON., on Saturday, July 15, 2017. (Photo: Johany Jutras)

During these times of self-isolation and no live sports to enjoy, BC Lions Communications and Content Manager Matt Baker digs back through his previous game archives to recap some of the more memorable games he has covered over the last four seasons on the job. To kick off this series, we look back at a rather memorable steamy summer night in Hamilton on July 15th, 2017 when one Travis Lulay would deliver one of his finest ever performances and set a new CFL record in the process.

Since going down with a torn MCL in September of 2015, Lulay had gracefully been accepting the role as backup and chief mentor to friend Jonathon Jennings who enjoyed an MVP-caliber season in 2016 when the Lions finished 12-6 and advanced to the Western Final against Calgary.

With Jennings behind centre, the Lions were a trendy pre-season Grey Cup pick to start 2017. After opening the season with a tough 30-27 home loss to Edmonton, they faced the unenviable task of playing three consecutive road games out east.

They would prevail 28-15 in Toronto then bus to Kingston for three days of practice and team bonding before a 23-16 triumph in Montreal. The successful eight-day stretch away from home lightened the mood but many inside the organization knew they needed Jennings to revert back to his old form. Thus, big things were expected of him as the squad was back home for a regular week of practice before jetting back out to Hamilton. And then, as they say, all Hell broke loose. 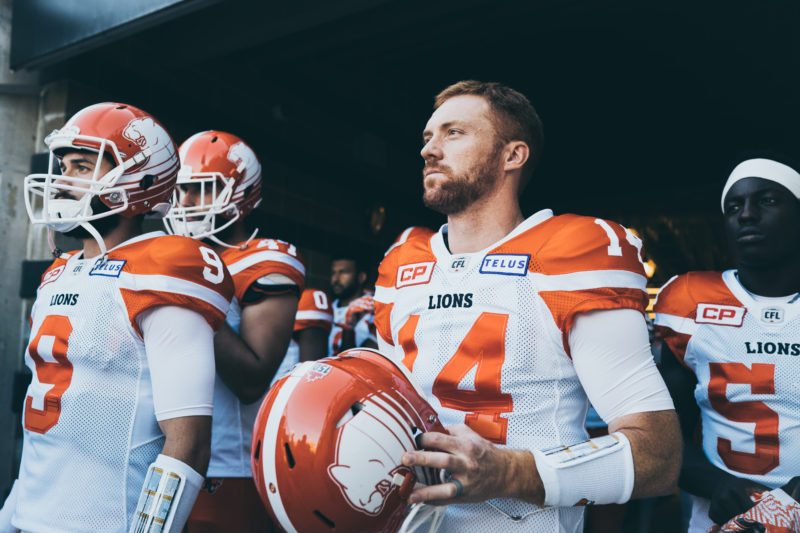 Travis Lulay (14) of the BC Lions before the game against the Hamilton Tiger-Cats at Tim Hortons Field in Hamilton, ON., on Saturday, July 15, 2017. (Photo: Johany Jutras)

What is it about Hamilton? Strange things always happen there. Off the top of my head: Solomon Elimimian’s ruptured Achilles in 2015 was a dark day. Of course, in his next game at Tim Hortons Field, Solly would play like a man possessed while setting a new CFL record for defensive tackles in a game.

There was also the ugly loss in the Eastern Semi-Final that unceremoniously sent Wally Buono into retirement in 2018.

Earlier that same year, Ticats players and CFL media had a field day with some Lions innocently dancing at mid-field (accidently on their logo) during a pre-game walkthrough.

Even Lulay himself suffered a shoulder injury at old Ivor Wynn Stadium in October of 2012 that began a series of ailments which prevented him from staying in the lineup up until the knee issue that thrust Jennings into action late in the 2015 campaign. What would happen next?

Fast forward to week four of the 2017 campaign. Steeltown was typically sunny and steamy for mid-July and Jennings was ready to revert back to his old form while leading the Lions to a third consecutive win…

And then future teammate Davon Coleman awkwardly fell on top of him on after a throw that was intercepted by Richard Leonard on the Lions’ first play from scrimmage.

Enter number 14. Other than two-point attempts and short-yardage situations, his most recent “relief” appearance during this 22-month stretch as the number two came in the Western Final loss at Calgary the previous November. 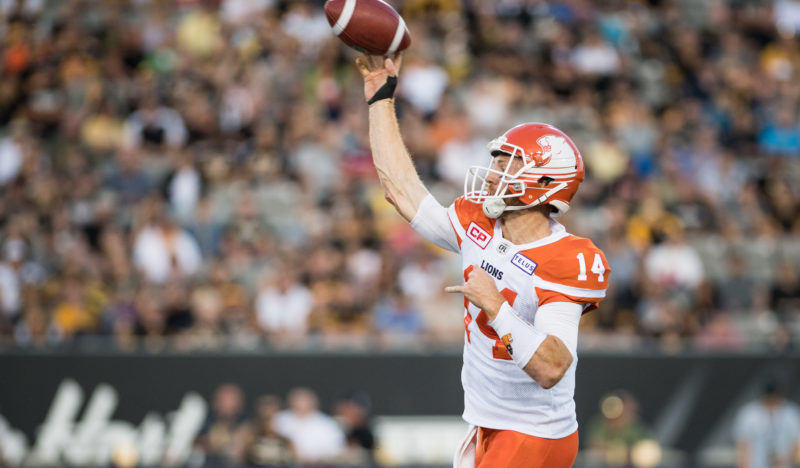 Travis Lulay (14) of the BC Lions during the game against the Hamilton Tiger-Cats at Tim Hortons Field in Hamilton, ON., on Saturday, July 15, 2017. (Photo: Johany Jutras)

After the Ticats took advantage of the turnover with a nine-play touchdown drive, Lulay responded by marching down the offence down the field in only five plays and connecting with Shaq Johnson on an 11-yard touchdown pass. It would be the first major of young Johnson’s career, so fittingly it set the tone for what would be a night of Lions and league milestones.

Many of you know what transpires next. You just had to be on the sidelines that night to truly take in what was transpiring in front of our eyes.

Lulay re-discovers some of that magic from his early days as Lions pivot and winds up passing for a career-high 436 yards as the Lions torch Hamilton 41-26 to improve to 3-1 on the young season.

His passing total set a new CFL record for a quarterback coming off the bench (previously held by Tim Kerrigan with 408 yards in a 1987 game), eclipsed Tim Cowan’s franchise record (385 yards in 1985) for a Lions quarterback coming into the game in relief and at that point was the 18th 400-plus yard game by a Lions passer in history.

The best part of this whole night was that in classic Lulay form, he refused to take all of the credit for his record-setting performance.

“The first two plays I got hit pretty good and that kind of jarred my senses into the game,” said Lulay outside the victorious locker room.

“I thought (offensive coordinator) Khari (Jones) did a really nice job as the game went on of getting a feel for what they were doing defensively. I think that’s a good indicator of our potential on offence. It was a big win.”

Flashback for a second to the first drive that ended with Johnson’s touchdown. Prior to the major, Lulay connected with Nick Moore on back-to-back receptions for a total of 27 yards that set them up on Hamilton’s 11 -yard line.

It set into motion what would also be a career night for Moore, the sure-handed receiver who had recovered from his own serious knee injury suffered early in 2016.

Moore finished with a career-best 220 receiving yards and caught a second quarter touchdown pass to help give them a 21-16 lead at the break. Moore’s yards total was the 12th best single-game total in Lions history.

“I just wanted to come and put it all on the line for my team,” said Moore after the game.

“We were shooting ourselves in the foot with turnovers in the first half and we knew Lulay was going to step in and do what he does. This was our goal from the start to go 3-0 on this trip.” 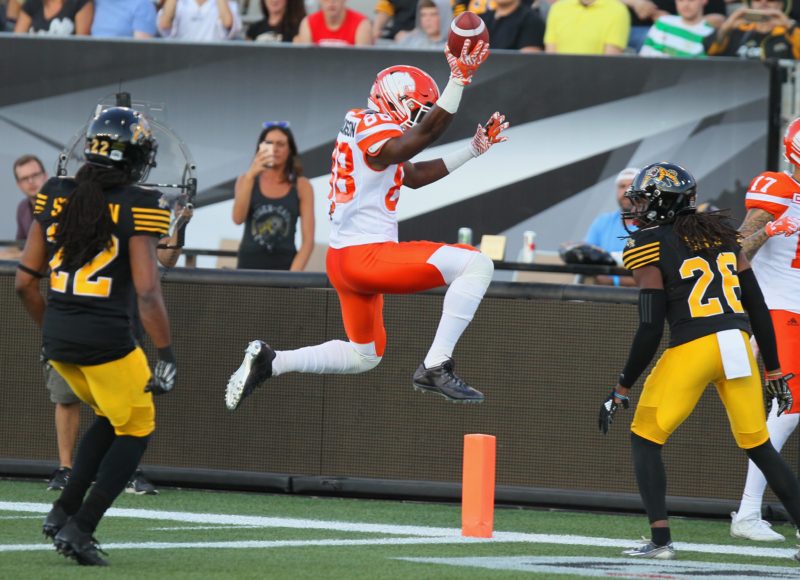 Added Lulay on Moore’s own heroics: “I can really relate to Nick. An ACL on a receiver is like a shoulder on a quarterback so I know what he went through.

“I have always been a big Nick Moore fan. We have a comfort level, a familiarity. He really came along in 2012 and in 2013 he was my guy. It was really fun to be on the field with Nick.”

As for Lulay’s third touchdown strike of the evening? It was of course a highlight-reel connection to Bryan Burnham.

As a man who had seen it all in his nearly three decades as a CFL head coach, Wally Buono had this to say about that night in Steeltown.

“It’s about the whole team, not just one player. I thought it was a great team win, all three facets stepped up when they had to and the most impressive thing was Travis coming off the bench and putting up 41 points and I don’t know how many yards in offence. We kept our composure, just before the half we scored the quick 14 points and that made a difference.”

The post-game locker room was expectantly vibrant. But deep down, there was some initial concerns on the severity of Jennings’ injury. After all, this was the guy being counted on to lead the Lions to another step in November and his long-term health would no doubt have a big impact. Overall, everyone inside the organization was thrilled for Lulay, his pal Jennings included. He stood right by Lulay’s side during the game balls presentation. The quarterback duo had formed a friendship that extended well beyond the field and the meeting rooms and that did nothing but make Lulay’s transition into the backup role a lot easier for everyone involved.

Another emotional moment took place during game balls and that was when Lulay acknowledged long-time equipment assistant Stuart Mitchell who had recently lost both of his parents. As Lulay stated during his post-game speech: “Farmer Stu is a guy who doesn’t say anything, but he will do anything for all of us.”

That was a special moment and also signified just how tight-knit this Lions team was. The five-hour post-game flight home was also fun with lots of clapping and yelling for individual players walking through the aisles to their prospective seats. As was the custom after wins, many of the guys were taking selfies and having some fun on their personal social media accounts before takeoff.

In an eerie sort of way, you can probably look at the night of July 15th, 2017 as a contributing factor to Jennings’ own inconsistency and yet another devastating setback for Lulay who would pick up where he left off with 404 passing yards in a thrilling 45-42 home win over the Blue Bombers.

After falling to 4-2 with a loss at Edmonton, Lulay orchestrated a 30-15 home win over Saskatchewan on August 5th. Jennings then made his return in an ill-fated rematch in Regina eight nights later. The motivated Riders intercepted Jennings four times – including one taken to the end zone by Ed Gainey – and cruised to a 41-8 victory. Jennings lost his starting gig after falling short at home to Calgary the next week and a road game at Ottawa right before Labour Day.

Lulay then went down with a season-ending torn ACL on the opening series of the next game, an emotional night where they would prevail over Montreal at BC Place. With Jennings back behind centre, they would win only one of their remaining seven games to finish 7-11 and out of the playoffs for the first time since 1996. It truly was a season of ups and (mostly) downs. But Lulay’s big night in Hamilton will not soon be forgotten.