Jevon Cottoy Looking to Double his Stats in 2020 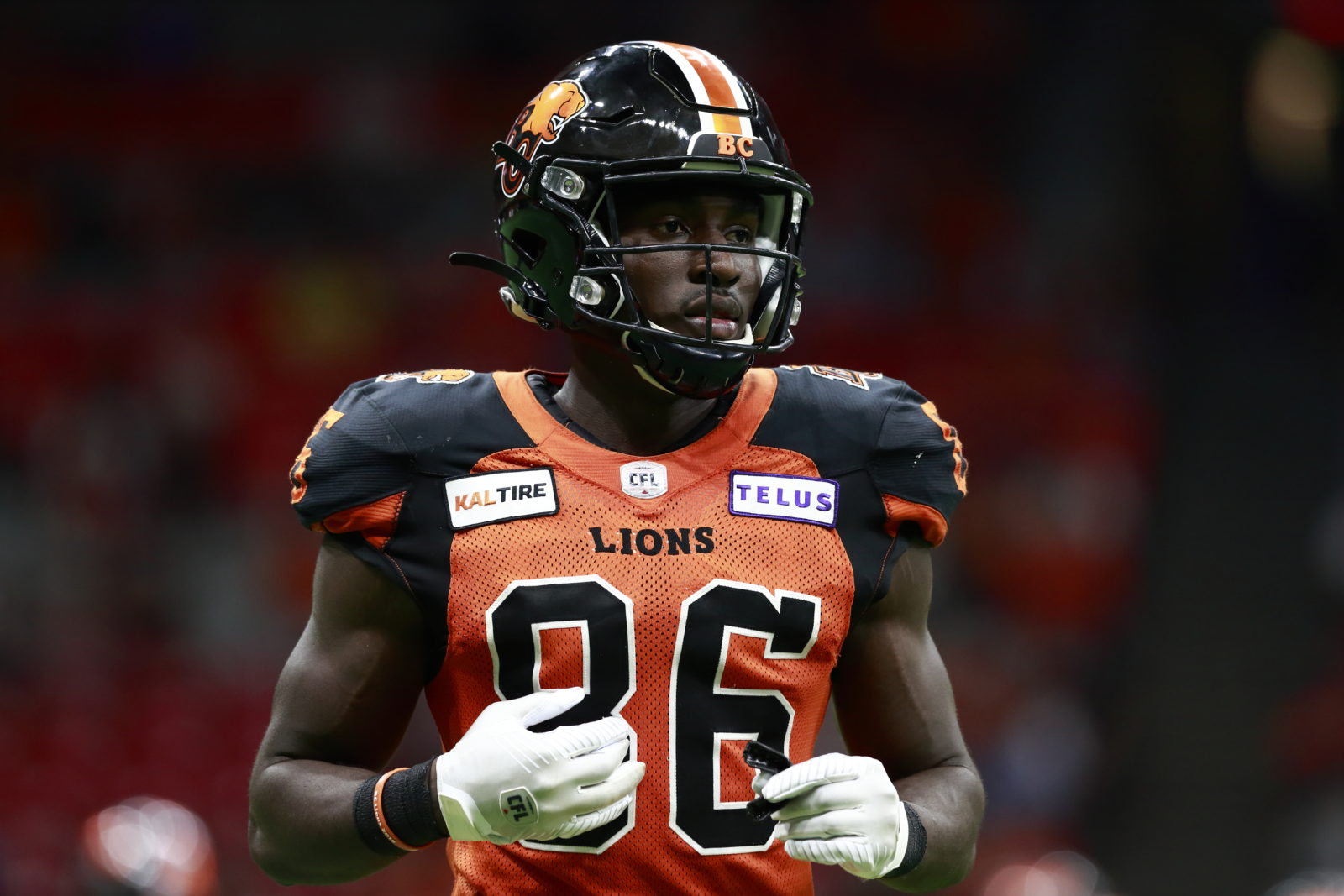 Jevon Cottoy Looking to Double his Stats in 2020

Jevon Cottoy opened eyes in Kamloops last spring. His performance impressed coaches enough to earn him a spot in the starting lineup by the time the 2019 season started. People’s eyes remained open throughout the season as Jevon caught 38 passes for 386 yards and one score as a rookie. 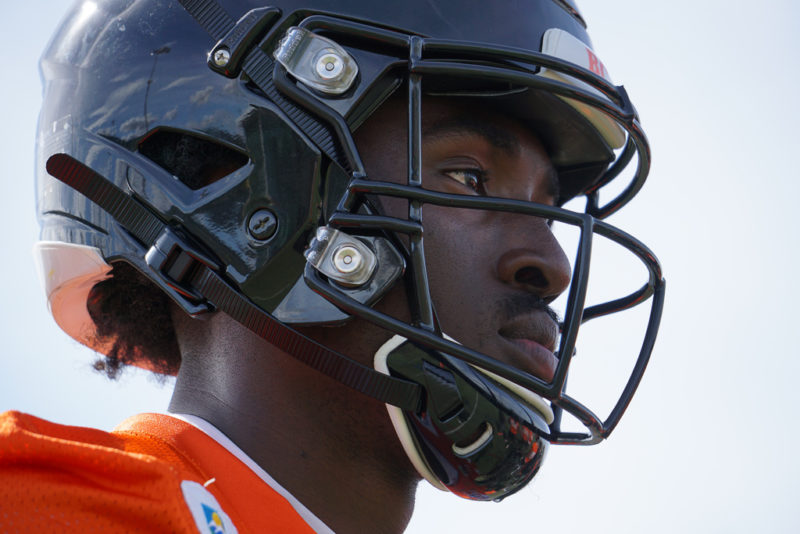 The 23-year-old made the rare jump from the junior ranks to the Lions and appeared to gain confidence as the campaign progressed. Cottoy’s role in the offence expanded in the back half of the season and he ended up leading the Lions by hauling in 86% of his targets. He proved to be a threat to defences once he had the ball in his hands. Jevon showed remarkable agility and athleticism considering his large frame en route to finishing fourth on the team with 197 YAC.

Mike Reilly employed Jevon as a safety net last season. He trusted the sure hands of Cottoy, and more importantly, he believed in Jevon’s ability to come down with the ball in contested situations. He converted eight second down attempts and Lions’ quarterbacks posted an efficiency rating of 108.7 when targeting Cottoy, placing him second on the team in this category.

Despite his impressive debut in the CFL, Jevon is setting his sights even higher in 2020.

“I want to double my stats from last year,” said Cottoy when asked about his aspirations for 2020. That is certainly an ambitious goal, but it is a realistic one considering Jevon’s talent and work ethic.

After last season ended, Jevon spent the holidays with his family back home in St. Vincent.

“At Christmas time I went back home to the Caribbean to see my mom,” says the lanky St. Vincent product. “A couple other family members came down from Toronto, some from New York and a couple others from Barbados. I pretty much got to see everyone I needed to see this offseason which was great.” 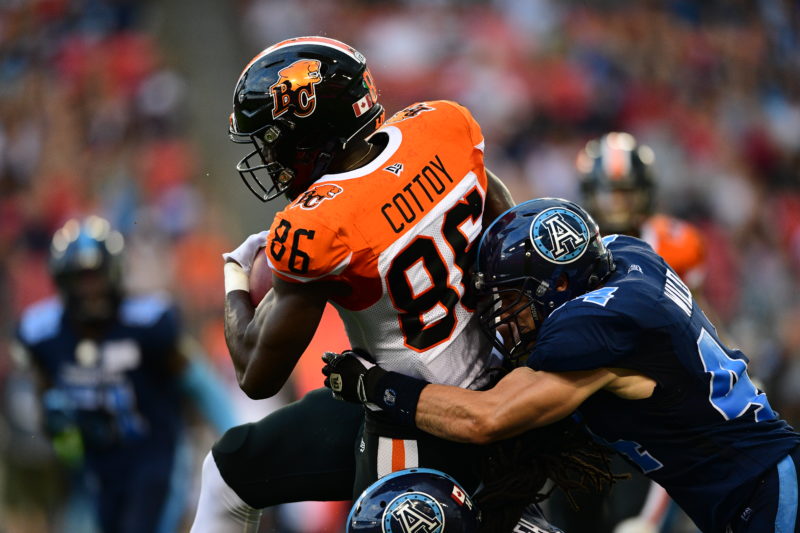 Jevon was motivated to get back to work upon returning to Canada in January. He has lofty goals for the upcoming season and he knows that the only way to make himself and his family proud is to outwork the competition.

“I was extremely excited to get the season started,” said Cottoy. “ I have been working hard every day since I came back from vacation to improve myself in every aspect and unfortunately because of the circumstances, I have had to slow things down a bit. But hopefully, things get better soon and we can get back on track.”

There were many highlights for Jevon in 2019. However, the best part about playing for the Lions last season was the fact that his mother and family back home in the Caribbean finally got the chance to watch him on the field.

“Last season was the first time my mom has ever watched me play,” said Cottoy. “It’s pretty exciting to know that my mom can watch my games anytime because I didn’t have that growing up since she is still living in St. Vincent. It feels good to know that she is still watching over me.”

Jevon Cottoy’s path to the Lions is a story of determination and has a uniquely Canadian feel to it. Born on the island of St. Vincent, Jevon left his mother and family in 2005 to move to Calgary with his father. A natural athlete, Cottoy excelled at nearly every sport he tried, but something was different about football.

Jevon was a swiss army knife in high school, starting games at quarterback, receiver, running back, kicker and punter. The versatile performer joined the Calgary Colts of the CJFL after high school and decided to focus his efforts on only playing receiver. He lit up the league in his lone season with the Colts. However, a devastating knee injury suffered late in the year put his love of football to the test.

“When I got hurt, it really made me question my commitment to the dream of playing football,” said Cottoy. “I had to decide whether I wanted to keep playing or just give it up and take a step back. When an injury like that happens, it takes a toll on the person. Having people around me and seeing how much people cared for me really helped me out. They could see my love for football and they encouraged me to keep playing.”

Lions fans are thankful that Jevon battled through his rehab and decided to continue his football career. Cottoy’s future is bright and it will be fun to see him take another step in his development in 2020.

Huddle at home and stay safe out there Lions fans.