Fans know what they’re getting from Shaq Johnson every week; a reception over 30 yards and an infectious grin that exudes joy. Lions’ fans have been fortunate to watch the Toronto, ON native make big plays for the past four years. During his career, Johnson has established himself as one of the best National receivers in the Canadian Football League.

Over the course of 54 career games in Orange & Black, Shaq has 97 receptions for 1,454 yards and seven touchdowns. 2019 was his best season, but Johnson has registered a minimum of 521 receiving yards and averaged at least 15.3 yards per catch in two of his last three seasons. The potential is there for stardom, and 2020 might be Shaq’s most productive year yet.

Today we will take a closer look at the Leos fleet-footed wide-out. Below are five things to know about Shaq Johnson.

2019 was not kind to the BC Lions, but Shaq Johnson teamed up with Mike Reilly to produce his best season as a pro. The 27-year-old set career highs with 39 receptions for 597 yards. He also added a pair of scores to his stat line. Shaq’s best outing of the campaign came in Ottawa when he torched the RedBlacks secondary for 160 yards and a touchdown. 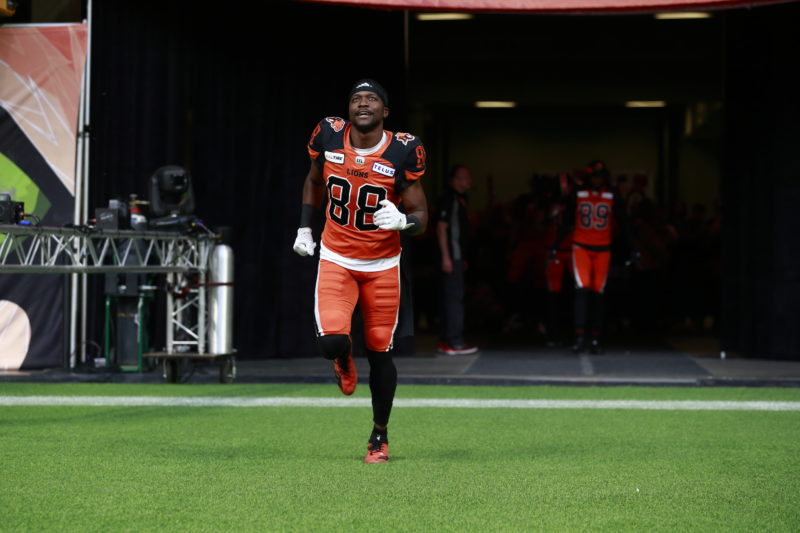 Despite a very productive amateur career, some scouts still had questions about Shaq. His size wasn’t ideal for a Canadian receiver and there were some that thought he would struggle to remain healthy over the course of an 18-game regular season. With the pressure on, the ex-London Beefeater silenced his critics with a combine performance for the ages.

Shaq ran the 40-yard dash in 4.56 seconds, good for third overall in the entire combine. Showcasing his explosiveness, Johnson posted the best broad jump of the event at 10’ 10 ¼”. Additionally, he finished in the top three in the vertical jump and the 3-cone drill.

The Lions got themselves quite a steal when they selected Shaq in the fourth round of the 2016 CFL Draft.

Shaq is third amongst National receivers in yards since 2017

Since becoming a regular in the Lions’ lineup in 2017, Shaq has recorded the third most receiving yards of any National receiver in the CFL. His 1,454 rank third amongst Canadian receivers in the CFL over the last three seasons. Only Brad Sinopoli and Lemar Durant have racked up more yards than Johnson in that time span. Additionally, his 97 receptions since 2017 rank fifth in the league for Canadian receivers.

Shaq began his collegiate career at McGill University in Montreal. He came out of the blocks fast with the Redmen, setting a U SPORTS freshman record with 61 receptions on the season. Johnson racked up 792 yards receiving and crossed the goal line five times during his debut campaign.

Football must run in the Johnson family genes. The BC Lions used some insider scouting tips when they selected Shaq’s younger brother, Hakeem, in the fourth round of the 2019 CFL Draft. The 25-year-old defensive back appeared in eight games as a rookie, recording three defensive tackles and one special teams stop. Shaq and Hakeem lived together during the 2019 season, and if Hakeem can exhibit the same work ethic as his older brother, the Lions could have a pair of brothers representing them as CFL All-Stars before long.