Behind The Scenes | The Voice Of BC Place 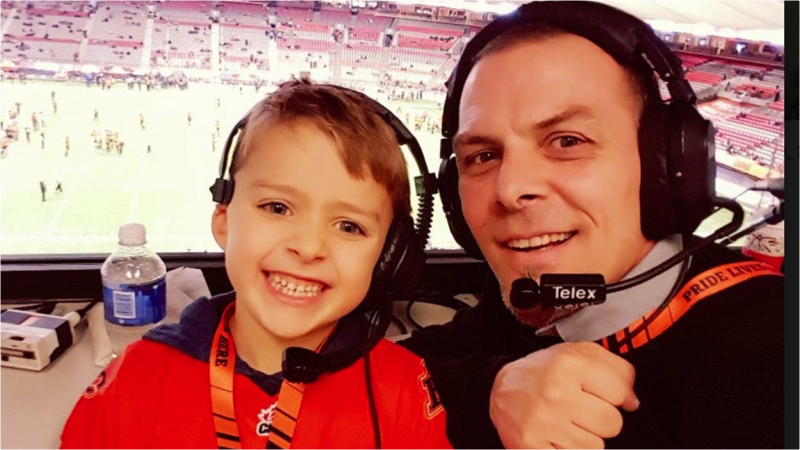 Behind The Scenes | The Voice Of BC Place

Written by Victor Gouchee- A stadium announcer is often a role that is appreciated by fans but also under-acknowledged for the work put in during events. For those who frequent BC Place for Lions games, they should be familiar with Don Andrews, the in-stadium PA voice. Even throughout all of the changes on the field, Don’s Voice has been the one constant inside BC Place.

Don Andrews has been with the Lions for the last seven seasons, eagerly looking forward to his eighth, whenever we are cleared to play again. In the meantime, Andrews has been keeping busy, working from home. But he mentions these other jobs don’t quite compare to that of speaking in front of thousands of screaming fans and cheering on his favourite club. Here is a dive into the man behind the voice of the BC Lions.

“I’ve been lucky to be able to keep working from home during this time. I do voice-overs for many companies throughout the Vancouver area and around the world,” explained the man with the great pipes.

Andrews has built a studio in his house which allows him to record instructional videos covering occupational health and safety for SeaSpan at the Port of Vancouver, as well as other media pieces for various companies, such as the Vancouver Whitecaps.

Realizing that the voice in our stadium stretches into many other industries, one may wonder how Andrews began a career with his voice.

“It was a weird beginning, “he remembers.

“As a young kid, my voice changed quite quickly. Everyone said I should be in radio. I wasn’t thinking about it, I mean, why would I?

So, years later at age 30, I finally went to broadcasting school at Columbia Academy, a classmate called me offering me a job, a baseball team needed a new PA announcer. I’m a big sports fan so I began looking into it. Although I was volunteering while doing school and working as well, I had jam-packed days. I went for the audition anyway and luckily, I got the job.” 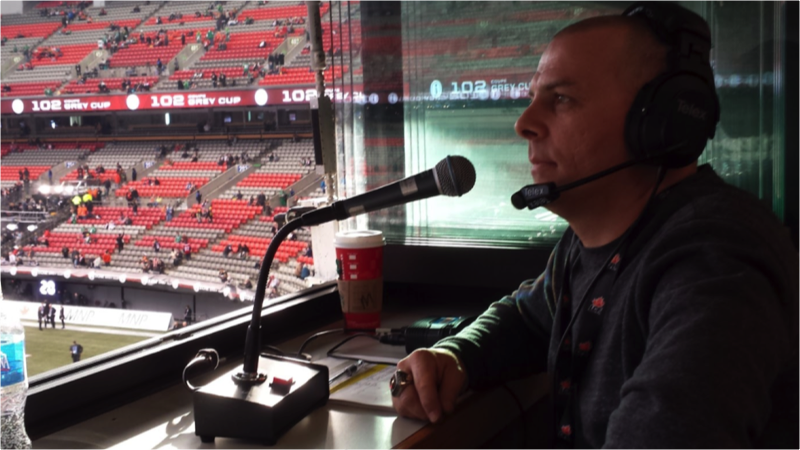 Andrews soaks it all in during a regular season game at BC Place in 2014.

Starting with the Vancouver Canadians some 14 years ago, Andrews has networked tirelessly to build a portfolio that has landed him where he is today. One moment that projected Andrews’ career was the day he met legendary Canucks announcer, John Ashbridge.

“I wanted to learn from the best, so I asked if I could watch him work and luckily he granted me the opportunity”, said Andrews on the massive impact the late Ashbridge had on helping him get started as an announcer.

“Eventually, I was offered a chance to work a fraction of John’s games while still learning from the best.”

In addition to having great mentors, Andrews has also had an impact on younger announcers aiming to follow a similar path.

“I’ve had the pleasure of knowing and working with Don since those Vancouver Canadians days,” said Matt Baker, the Lions Manager of Communications and Content.

“I started as the C’s internet play-by-play broadcaster that same year and like many others who frequented the ballpark, I was immediately struck by those pipes. I mean, imagine stepping into the batter’s box and having that voice call your name. That’d be unreal. Then I got my foot in the door with the Lions as stadium play-by-play announcer in 2014 and having Don on the mic next to me really helped ease some of my nerves. Talking right to 20,000-plus people isn’t an everyday thing, right?  The two-man booth at BC Place is a great set up and Don’s pedigree is a big part of that.” 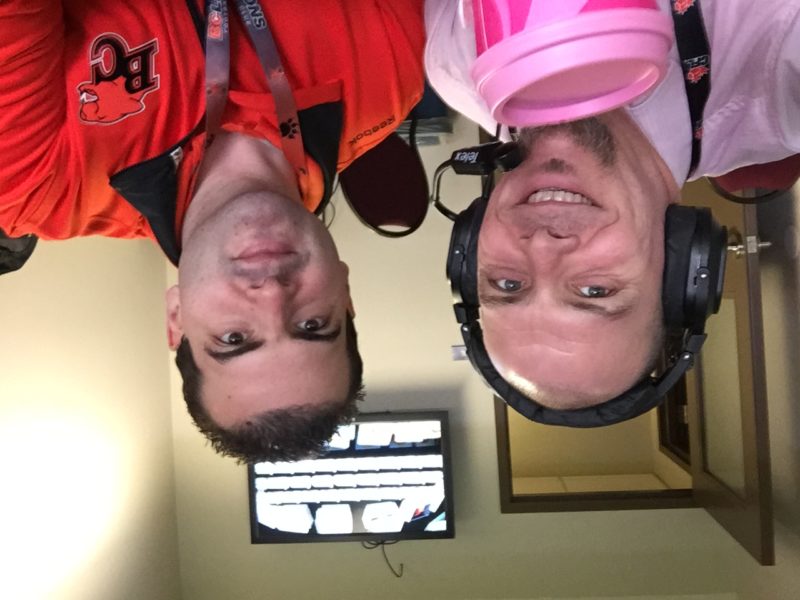 Andrews (left) and Matt Baker take a break during the action of a home game at BC Place during the 2015 CFL season.

Side note: Don handled all of the stadium voice duties in 2016 and 2017, proving that his versatility is another strong suit. When he’s had a partner handling play-by-play, the famous voice primarily does sponsor reads and helps pump up the crowd on defence.

Vancouver may be a big city on a map or in the eyes of people around the world, but the way Don has navigated his network around the city shows that it may not be as big as initially thought. BC Lions Vice President, George Chayka, was attending a Vancouver Canadians game almost a decade ago and that is when he first laid ears on Andrews’ intoxicating voice.

RELATED: Behind The Scenes Of A BC Place Game Day.

Once realizing how engaging this Canadians’ announcer really was, Chayka had to snatch him up to bring his talents to BC Place.

“Here we are 8 years later and I’m very thankful to be doing what I’m doing, working for the sports teams I grew up supporting as a child,” adds the Voice.

Over the years, Don Andrews has been the voice for many companies. Along with local sports teams like the Lions, Whitecaps, Giants,  and Canadians. Don also hosts the annual Rugby 7s tournament at BC Place.

“My favorite event I’ve worked has to be the 102nd Grey Cup at BC Place, to be part of such a big event in History was just amazing. But aside from football, there’s nothing quite like working the Rugby 7s weekend. It’s an exhausting two days, but it could not be more rewarding.”

Although Don is keeping busy with his own business and his many global clients keeping him busy, he says he cannot wait to get back to working in front of the fans at BC Place, and hopefully get back to sharing a pre-game meal with Baker, his old pal from the Nat.

“I love that guy, we get along very well. We’ve had some history working together for the Canadians too. Aside from Matt, the people I’ve grown so used to seeing every day at BC Place is what I miss the most right now, it’s weird being away from everyone for so long.”