They were just the second team in CFL history to do it and, to date, it’s the only time in five attempts where the BC Lions won a playoff game as a crossover team from the West. This Friday evening, TSN Encore flashes back to November 15th, 2009 when Casey Printers and company pulled off a 34-27 overtime victory in the Eastern Semi-Final at old Ivor Wynne Stadium in Steeltown. 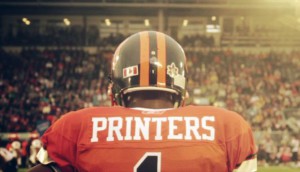 To say these Lions limped into the playoffs for a then CFL-best 13th consecutive year would be an understatement. With three weeks to play in the regular season, they still controlled their own destiny for second place in the West and a home playoff date at BC Place. A nailbiting overtime loss in Saskatchewan, followed by home setbacks to the Stampeders and Eskimos ultimately dropped them to 8-10 and ironically, it was the same Tiger-Cats prevailing in Winnipeg on the regular season’s final day that enabled Wally Buono’s squad to back into a crossover spot. That’s how razor-thin it was: they quickly went from being in the driver’s seat for second place to potentially out of the playoffs altogether if they didn’t get help on the out of town scoreboard.

This Lions season would be best remembered for the return of Printers, who joined the practice roster in mid-September and took over the starting duties from Buck Pierce and Jarious Jackson for those final three contests. Despite the losses and dealing with a nagging thumb injury, Printers was starting to show flashes of his old form that won him the 2004 Most Outstanding Player Award. That, coupled with the fact he was facing a Tiger-Cats squad that had cut him loose in the off-season made this an intriguing crossover tilt for many reasons. It also marked the third time since the crossover rule was implemented in 1997 that the Lions were in the playoffs as an ‘Eastern’ club.

The rabid Ticats fans had not seen a playoff game at home since 2001, while the battle-tested Lions still considered themselves Grey Cup contenders despite a fourth-place finish in the West.  After all, a good chunk of the nucleus that won it all in 2006 was still there: Geroy Simon, Angus Reid, Brent Johnson, Barron Miles and Javier Glatt, just to name a few.

Crowd noise wouldn’t prove to be much of a factor for Printers and the visiting Lions and as you will re-live on the broadcast, they would make their own franchise crossover history. After three Paul McCallum field goals were all they had to show for their efforts, the quarterback’s 12-yard touchdown run late in the second quarter gave them a 16-6 halftime lead.

After Kevin Glenn and the Ticats responded with ten unanswered points to tie it, Rolly Lumbala- then in his second year with the Lions- scored on a one-yard touchdown run to restore a seven-point lead after 45 minutes.

And then, just like many other playoff games, it got really interesting in the final minutes. McCallum’s punt single put them ahead 27-16 with just 3:21 to go. One more defensive stop and they could pack their bags for Montreal.

Nick Setta’s field goal would make it an eight-point game with 2:17 left. After Printers failed to get a first down on the ensuing Lions possession, it was officially time for the nerves to kick in. Hamilton would ultimately tie it when Glenn hit Dave Stala for a touchdown pass and then completed one to Marquay McDaniel for the two-point conversion. The Ticats wouldn’t have a lead all day but all of a sudden, we were headed for overtime and the home side had all the momentum.

But Printers would refuse to be denied on this day. Overtime started with 2009 Most Outstanding Rookie Martell Mallet rumbling for 27 yards and the Lions were on the doorstep.  Printers then hit Ian Smart for an eight-yard touchdown and they were back ahead by seven.

It was time for the Lions defence to shine. A ten-yard sack by the always clutch Brent Johnson forced the Ticats into a 3rd and 9 with the season on the line. When Glenn’s pass to Arland Bruce fell incomplete, the visitors had officially dodged a bullet. Game over. Lions 34 Tiger-Cats 27. And for the time being, Printers had the full confidence of the organization.

“I think you saw his maturity today,” Geroy Simon told the Province Newspaper after the win.

“There was a ton of adversity, a ton of second-and-longs. And he just kept stepping up and delivering the ball where he needed to go.”

The magic was shortlived. With Grey Cup visions and the chance to really make crossover history dancing in their heads, Printers and company were thrashed 56-18 by the Alouettes at Olympic Stadium. With that, the roller-coaster season had officially peaked for the last time.

2010 marked a big change with a move to the temporary structure on old Empire Stadium grounds. It was good for nostalgia but not much else. Printers struggled to build off the momentum of the previous fall and would be released by the club following a blown lead in Winnipeg on Thanksgiving weekend. This would pave the way for Travis Lulay to be the new face of the franchise. The rest, as you all know, is history.