Written by Steven Chang- Newly signed Lions offensive lineman Ryker Mathews ultimately committed to BYU for two very important reasons ­— for his education and to grow as a football player in an environment where coaches had faith in him since day one.

Growing up only a few minutes away from the Provo, Utah campus, Mathews actually disliked the Cougars as a kid. In a neighbourhood that predominantly supports the white and blue, he was one of the few who rooted for the rival University of Utah Utes.

“A lot of people outside of Utah really don’t understand, ” Mathews said.

“I mean they know about the BYU and Utah rivalry but they don’t quite get the depths of it. I actually cheered for Utah growing up and hated BYU.”

But when the former U.S. Army All-American Bowl all-star had to make a realistic decision on who to play for in college, he chose BYU instead.

“Once I got into the recruiting process, I thought more as a player and not a fan. Trying to look at it from that aspect, there were a lot of things at BYU that I wanted to be a part of,” he added.

Although Mathews had multiple college offers from Utah, Kansas, Oregon, UCLA, Notre Dame and Arizona, he wanted to stay home. It ultimately came down to BYU or Utah. He felt BYU was more invested in his potential.

“They were telling me from day one that I could have an immediate impact on the team and they needed me, which I think I could’ve done that at Utah as well. It just felt like a better fit at BYU for my personal growth and I seem to get along with the coaches better.”

The 320 lb offensive lineman started 33 games and helped the Cougars to a 33-19 record during his college career at BYU. Playing under head coach Bronco Mendenhall at the time, Mathews said the team has played in a few interesting games. What he meant by interesting consists of last-second missed field goal against Utah in 2012, the brawl in 2014 Miami Beach Bowl and winning Hail Mary plays in Mathews’ senior year.

Out of these exciting and unusual games, Mathews couldn’t leave out upsetting the Texas Longhorns in his backyard. BYU defeated Texas back-to-back seasons but the meeting in 2013 was the one to remember.

On Sept 7th of that year, BYU piled up a total of 550 rushing yards against the Longhorns.  Current New Orleans Saints quarterback Taysom Hill was only a sophomore at the time but finished the game with 259 yards rushing. Running back Jamaal Williams, now with the Green Bay Packers, added182 yards on the ground. BYU ran past 15th ranked Texas with a ton of breathing room, 40-21.

BYU isn’t a small school by no means, but when the opportunity to line up against a team that was receiving all the attention, there was always something to prove.

“Going into that game as an offensive line, all we heard was how incredible their defensive line was and how three of the four were going to get drafted, possibly the fourth,” Mathews recalls.

“When you put a rushing record on supposedly one of the best D-Lines in the country, it makes you feel pretty good when you’re outperforming the guys that are getting all the hype.”

Blocking for a mobile quarterback like Taysom Hill meant Mathews and the O-Line needed to have high awareness because he was going to utilize his legs once he saw daylight.

Mathews said it made his job a little more difficult but it also made it extremely exciting. He had no plays off and it gave him the chance to pancake the opposing defence.

“It’s very satisfying because the defence has to respect all angles of the game. A lot of pocket passers, defence don’t ever have to worry about them running around so they really just have to key off the running back or a wide receiver. But adding that extra dimension really screws with a lot of defences,” he said.

“Coaches and scouts look at your finish. Offensive lineman that finish they love. They love the pancakes at the end of the play. So, when you’re playing with a quarterback that you never know where he’s going to be and you’re forced to do that to protect him.” 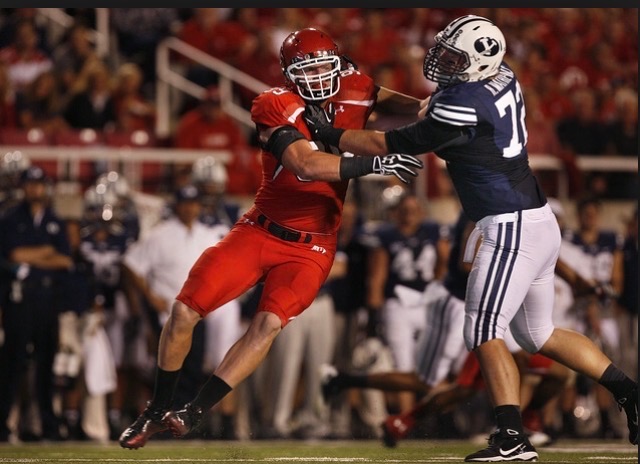 BYU kicked off their 2015 season with back-to-back victories that were determined by last-second Hail Mary throws from quarterback Tanner Mangum.

Both games were nail biters, first against Nebraska and then Boise State. For Mathews, a senior at the time, he had the chance to be a part of two remarkable wins.

“Anytime you have a Hail Mary opportunity, it’s crazy when you convert it and it’s even crazier when you have two games in a row where you convert Hail Mary passes, that’s just unheard of,” Mathews remembers. 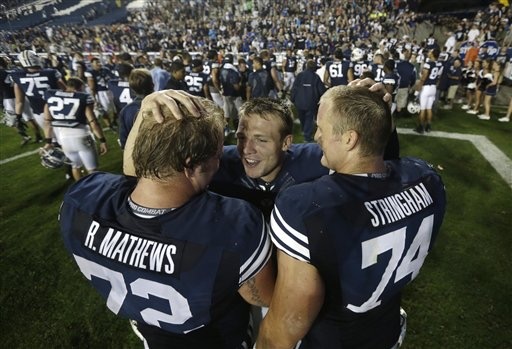 The game itself was a story on its own. BYU lost a heartbreaker in double overtime (55-48) against the University of Memphis. The end game was only a bloody beginning for both teams.

BYU had the ball possession until it was picked off on the very last play. The camera was focusing on a group of Memphis defenders dogpiling on the field celebrating the interception. Then a few seconds later, the screen switched to a bench-clearing brawl between two sides. Coaches were trying to drag their players away from the fight but it was already out of control.

Amidst all the madness, Mathews said he blew his knee on the last play. While the brawl was happening, he was being carried off the field by a teammate and the trainer.

“I didn’t even get to throw a punch. That was kind of sad. Watching all my buddies getting mauled by Memphis and I’m limping off the field into the locker room because I couldn’t even stand up,” he recalled.

While some players were serving their suspension, Mathews was rehabbing his knee to ensure he could play at full speed again. It wasn’t the first time he had to fight through an injury in college. Mathews was thankful to have a supportive staff who helped him recover both physically and mentally.

“When you get injured, a lot of guys feel very distant from the team. They don’t feel like they’re a part of the team at all. It actually gets in your head and you go into this realm of depression. Coach (Bronco) Mendenhall knew that and he was helping me mentally to stay on the right path of recovery,” Mathews said of his injury rehab.

This was an ending that might only occur in college football. BYU was down by three and they managed to put themselves within field goal range. Then so many things happened in the last ten seconds but BYU just couldn’t put three points on the board.

First, there was an error with both the game clock and play clock that caused Utah’s bench and fans to storm onto the field thinking they had just beaten their rival. The officials gave BYU one second back.

That was followed by a blocked field goal attempt and Utah fans charging towards their players once again while the ball was still live. The referees penalized Utah for interfering with the play and move the ball 15-yards ahead of its previous spot. The second field goal attempt would’ve sent the game to overtime, but ended up drifting to the left and shanked off the goal post. Utah fans ran onto the field for the third time, finally to be able to celebrate without being told to get off the field. BYU fell to Utah 24-21.

“I’ve had some weird games like that. Some of them good, some of them not so good. But I’ll never forget,” Mathews said.

Now when looking back at this particular game against Utah, Mathews reacted described it in one word: anger. But he then quickly smiled. He’ll at least have this crazy story to tell for the rest of his life.

Although he may want to win those games back, he’ll never forget how his former teammate Jamaal Williams, who owned multiple colours of Beats headphones and would match them to his Jordan’s sneakers. That also puts a smile on his face.