November Rides, Switching Sides | Our History With The Stamps 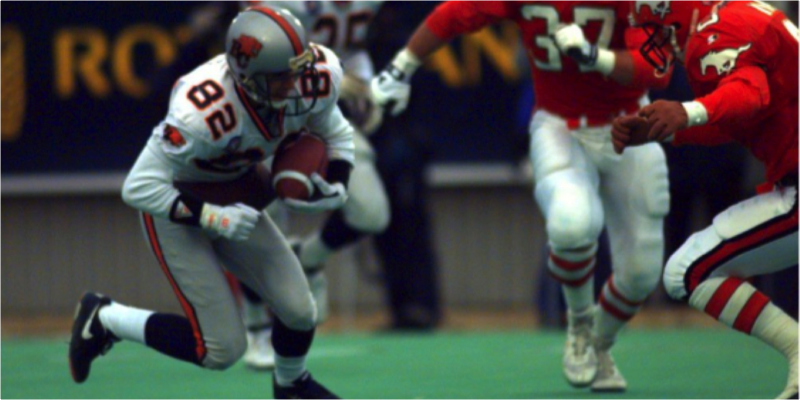 November Rides, Switching Sides | Our History With The Stamps

We figured it’s time to talk about our rivalry with the Calgary Stampeders. Why not? The teams were originally scheduled to lock horns in the second of three meetings this week and as you may have read over the past few months, we love going down memory lane. Now, about that rivalry: The Stamps have been on the losing end of a couple of the more celebrated results in BC Lions history and also handed this franchise a couple of November gut punches in return.

They also stole away the best quarterback in CFL history in the early 90s; a move that began a brief down period for the Lions while giving the Stamps a building block for their most dominant run in franchise history.

And then there is the man who was at the helm of that dynasty for most of the 1990s. Wally Buono migrated to the other side of the Rockies in 2003 and would quickly put a similar stamp on a Lions team that desperately needed a boost. With more, we take a deeper dive into our all-time history with the Stamps. Big wins, a couple of bad losses and some big movement on the player and coach front. As we have indicated, the relationship is a bit complicated. 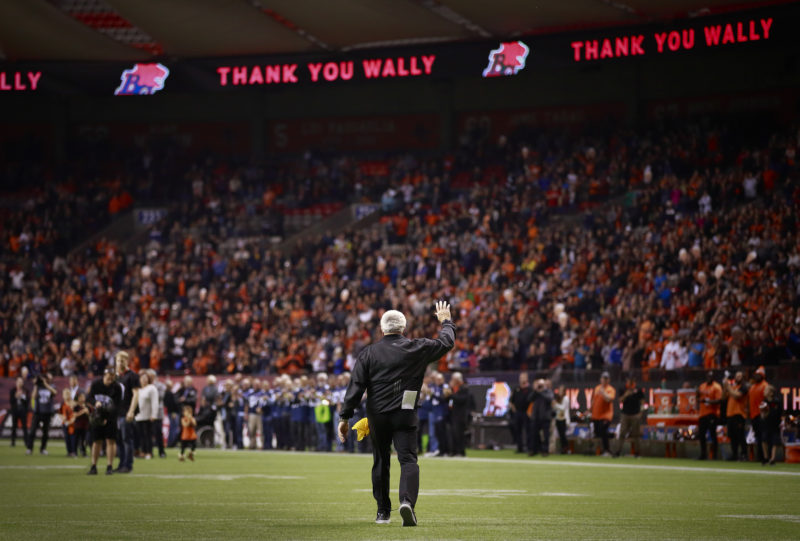 Whenever the Lions and Stampeders have met in the CFL playoffs, it has usually resulted in good things happening for the winning team. The first November meeting took place way back in 1964 when the Lions prevailed two games to one in a best of three Western Final series. The deciding result was a 33-14 victory for Joe Kapp and company at Empire Stadium. One week later, the Lions took down Hamilton 34-24 in the 52nd Grey Cup; finally winning that elusive first title in team history.

From there, the Stamps prevailed in both the 1969 and 1979 Western Semi-Finals. After that, the playoff rivalry got interesting. Flutie’s last game as a Lion was to his eventual replacement at Quarterback Danny Barrett in the 1991 Western Semi. Stamps 43 Lions 41. Two years later, Flutie would beat his old team in the division Semi-Final in 17-9 defensive struggle.

And then, who could forget the magic of 1994? Danny McManus to Darren Flutie, in the snow with no time on the clock, to cap off one of the biggest upsets in CFL history. It proved to be the perfect appetizer for the victory over Baltimore at home in the 82nd Grey Cup the following Sunday.

Six years later, the Lions won another Western Final at McMahon Stadium, 37-23 over the heavily favoured Stamps to spoil their home Grey Cup plans. That proved to be sweet revenge after the Stampeders did the same thing at BC Place in the previous Western Final.

The Stampeders have since prevailed in all four playoff meetings: the 2001 Western Semi-Final as well as the 2008, 2012 and 2016 Western Finals. Calgary’s victories in ’01 and ’08 both led to Grey Cup titles. Lions fans might point to the 2008 and 2012 losses as greatly missed opportunities.

The visiting Lions controlled most of the 2008 game but had to settle for six Paul McCallum field goals in a 22-18 defeat. The 2012 loss came at home, following a 13-5 regular season and visions of winning back-to-back Grey Cups for the first time in club history. The 2016 meeting in Calgary was a 42-15 Calgary blowout after the Lions seemingly used up all their energy in a brilliant comeback win over the Winnipeg the week prior.

But hey, you can’t take away the times we sent Calgary packing either.

With the arrival of Doug Flutie to the BC Lions quarterback room in 1990, Lions fans were rightfully expecting to be set at the position for a number of years. In fact, Doug’s 1990 debut came against the Stampeders and it was a classic CFL rollercoaster. His Hail Mary touchdown to Ray Alexander on the final play of the fourth quarter sent it to overtime and the game ended in a 38-38 tie. Another nugget from that one? It was Buono’s first game as Stampeders head coach.

However, a memorable 1991 campaign would prove to be the end of Doug’s chapter with the Lions. After throwing for 6,619 yards and winning the first of six CFL Most Outstanding Player Awards, Flutie was due for a big raise but also had a preference to stay on the west coast with his brother Darren. He outlined that process in a recent episode of BC Lions 1st and Now Chat.

“I would have loved to have stayed. My biggest regret throughout my career is that I couldn’t stay in one place for a long period of time and just build and build and get better,” Flutie told bclions.com earlier this year.

“The fact that I had a chance to play with Darren; I was becoming a free agent. I did not want to go anywhere but BC was offering me less than half of what Calgary was offering me. I went to Bob O’Billovich and said, ‘just come close. Meet somewhere in the middle.’ He said, ‘no, that’s the best we can do.’ Because he knew I wanted to stay and play with Darren.”

Doug’s move to Calgary would be bad news for the Lions for a couple of seasons before Darren and company finally exercised their Stamps demons in the dramatic 1994 Western Final. Doug did lead Calgary to a Grey Cup win in his first season there, snapping the franchise’s championship drought of 21 years, but would he not sip from the Grey Cup again until moving to Toronto in 1996 and 1997. 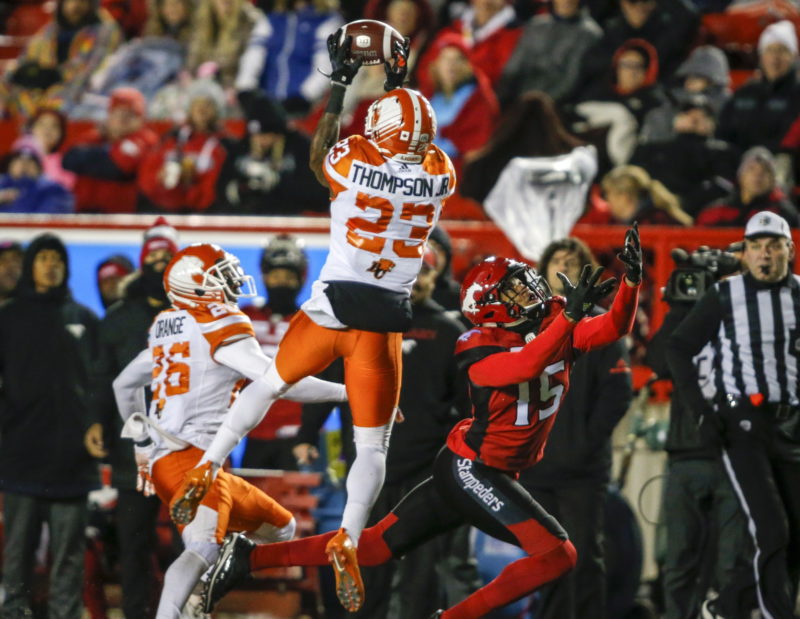 2002 saw the return of legendary Bobby Ackles to the Lions as team president. After an up and down season that ended with a loss to Winnipeg in the playoffs, Ackles made the decision to fire GM and head coach Adam Rita. From day one, Wally Buono would be the target of his search. The actual process that led to Buono finally being freed from the Stampeders is probably worth a separate story, but his move to the west coast immediately brought credibility back to a franchise that had quickly fallen on hard times since winning the Grey Cup in 2000.

Buono quickly reunited himself with quarterback Dave Dickenson after the ladder finally grew tired of sitting third on the San Diego Chargers depth chart. And much like Flutie’s move to the Stamps 11 years prior, Buono’s presence with the Lions would prove to be bad news for his former team. Wally and the Lions swept Calgary in 2003 and his record against the Stamps was an impressive 9-2-1 in games against them from 2003- 2007. It wasn’t Calgary brought in John Hufnagel as GM/head coach in 2008 that their fortunes against Buono changed.

At any rate, it’s impressive how Buono got similarly excellent results as the head coach of two different franchises, a rarity in pro football. With Calgary, he won three Grey Cups and left with a regular season record of 153 wins 79 losses and two ties. With the Lions, he was in charge of the Grey Cup wins in 2006 and 2011 while finishing his tenure here with 129 wins, 86 losses and a tie. Buono passed Don Matthews as the CFL’s winningest coach in a victory over Toronto in 2009. 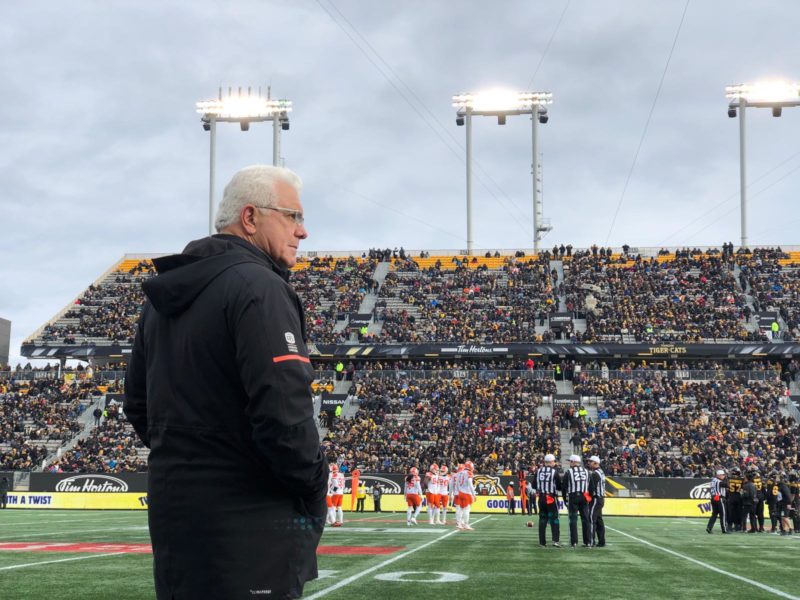 Wally Buono reflects on sidelines as his coaching career comes to an end in a loss at Hamilton in the 2018 Western Semi-Final. Photo: bclions.com

We had been wanting to do a more in-depth piece on this rivalry for some time. So we figured, why not do it in a week when the two teams were scheduled to play each other? Over the history of the Lions franchise, it’s hard to say who their number one rival has been. That’s especially tough considering the club has never had the traditional Labour Day rival. Calgary would have to be a contender on this front, especially when you consider the number of playoff battles in the last 30 years, combined with big figures like Flutie and Buono switching sides.

If we asked this question before 1991, Winnipeg would be a prime contender based on three consecutive Western Final meetings in the 1980s followed by a Grey Cup meeting in 1988. Buono’s arrival also sparked a few memorable playoff meetings with the Saskatchewan Roughriders.

One thing we all know is everyone reading this can’t wait for the day current CFL rivalries are being talked about once again.