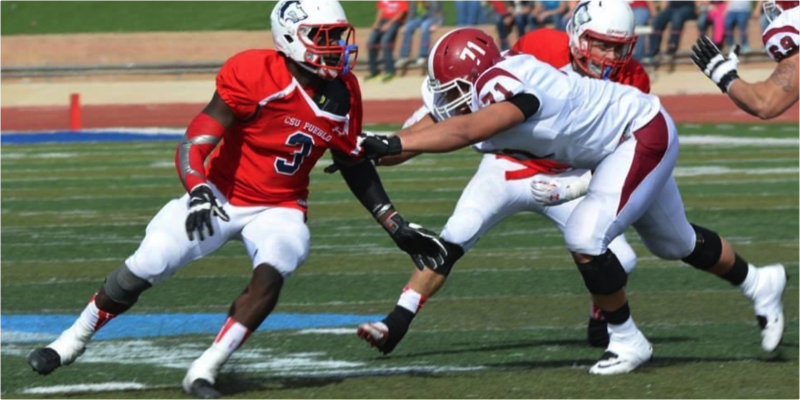 Lions defensive end Darius Allen remembers that time when his Colorado State-Pueblo ThunderWolves team took four years to win the national championship after a few years of playoff heartbreak. While reflecting on those heartbreaking playoff losses in the previous three seasons, it’s almost as disappointing as the year 2020.

Cancelling the 2020 CFL season wasn’t the news people wanted to hear, including Allen. However, he has decided to stay in B.C. to continue his training and stay healthy for the next season.

“Coming off with the ACL, being to be able to work with [Chris] Boyko, they were there from the beginning when it first happened to be so being back here and working with them, I think it’s a lot better for me,” Allen said.

Like many others, Allen was unable to access any gyms during the lockdown a few months back, when he desperately needed to be back in shape after suffering his season-ending knee injury in a victory at Toronto in July of 2019.

“I think going back home and dealing with the whole COVID situation was rough for probably everybody. For me especially when I got back right before the season was about to begin, every gym was shut down and you don’t know when it’s going to be over,” said Allen on dealing with the lockdown.

“But I’m glad to be back in the facility. We got Fig, we got Claudell, we got all the big guys there. So it’s fun to be around the team,” he added.

Allen was the cornerstone of the Colorado State-Pueblo ThunderWolves football team, especially in his junior year when he was named defensive player of the year and a finalist of multiple individual awards for being the top defensive lineman among the competition.

Originally born in Lexington, Kentucky, Allen moved to Colorado in his junior year of high school where he played football just down the street from CSU-Pueblo. Despite only playing 14 total games in high school, Allen made enough noise to get the ThunderWolves knocking on his door.

Although his ideal school at the time was to play for the University of Colorado Boulder and to compete in the Pac-12 conference, Allen joined the Division II Rockey Mountain Athletics Conference ThunderWolves for four seasons to be a part of the winning culture.

“When I first came in, our team went undefeated and it was amazing to witness. As a freshman, I got a chance to play and be behind really good seniors. I got a taste of winning at a very young age,” Allen recalled. 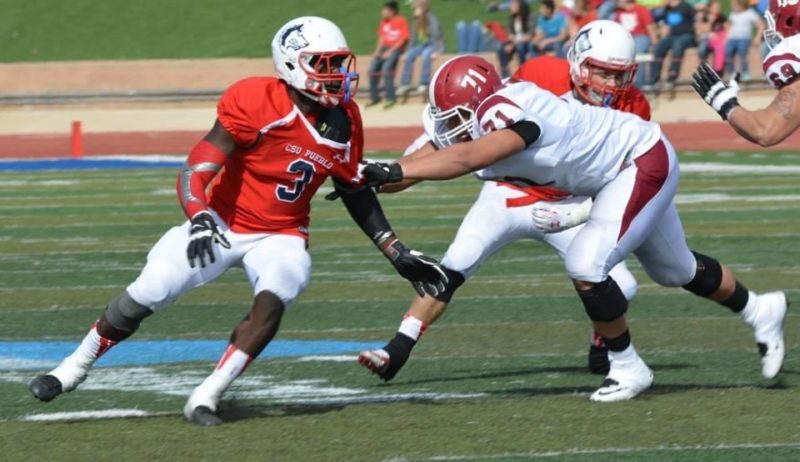 From 2011-2014, CSU-Pueblo would have a nearly perfect record in each season. But in three out of four years, the ThunderWolves fell short in the playoffs. Those setbacks made winning the conference seen as meaningless.

“There would always be like some schools from up north and they would beat us. In my first year, we played Minnesota Duluth and we lost on an offside in the last play of the game. We had an offside penalty which gave them field goal range. They kicked the field goal and beat us,” he recalled.

In 2012, CSU-Pueblo faced a familiar opponent, West Texas A&M University. The ThunderWolves had beat the Buffalos in the previous two meetings. But West Texas A&M showed up when it counted. Opposing standout running back Khiry Robinson sat out for the season but suited up in the playoff game and tore apart CSU-Pueblo’s defence.

Allen and the team encountered the same challenge in the following year. Despite going undefeated in the regular season, the ThunderWolves could not end their playoff losing drought. Although Allen recorded multiple sacks in the game, his contributions didn’t provide enough edge in another heartbreaker- 34-30 at the hands of number 22 ranked Grand Valley State.

In three years, Allen gained almost 40 lbs and grew a couple of inches. His growth transferred onto the field as well. He led NCAA Division II football with 15.5 sacks in 2013. On top of being selected as a conference all-star and defensive player of the year, Allen was a finalist for the Gene Upshaw Award(best lineman in Division II, offensive or defensive) and Cliff Harris Award (small college defensive player of the year) all in the same season.

“Fast forward to my senior year, all those years we had been undefeated in the regular season. When we went up to Fort Lewis, Colorado, which is a team we beat by 50 every single year. We had a two-hour rain delay at halftime and lost to these guys by a point. We lost to the worst team in the conference,” said Allen describing the beginning of 2014.

That particular loss didn’t break the team apart as the ThunderWolves’ championship season in 2014 was completed by a strong defence, according to Allen.

“We just blew out everybody else and then we went to the playoffs. We just had a great playoff run. Honestly, no one could score on us,” he added.

The CSU-Pueblo ThunderWolves shut out Minnesota State University, Mankato with a 13-0 to capture its first national championship in program history. 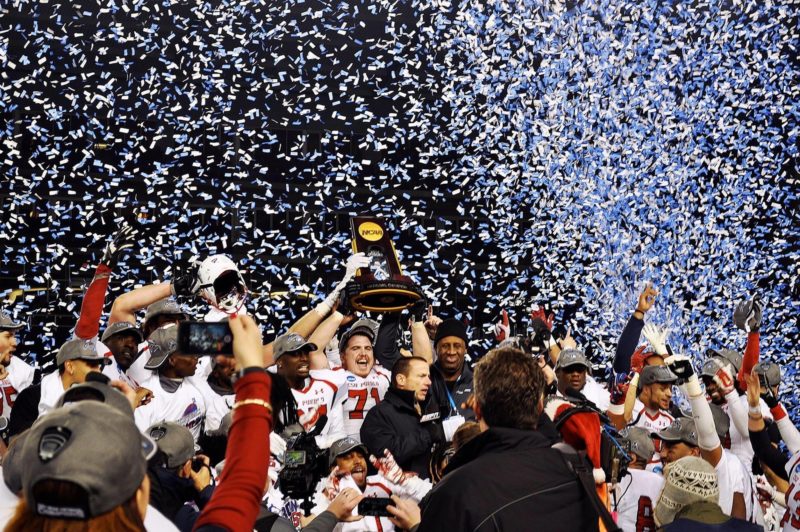 Allen’s top college moment would have to be his first game as a freshman.

It was a memorable one because not only did Allen recorded his first college sack, but the hit helped the team close the game in a tight 26-24 victory.

“We went down to West Texas A&M and it’s hot man. It’s like 110 degrees [Fahrenheit] in Amarillo. I don’t know how they do it,” he recalled.

Having to watch the veteran guys battle on the field, Allen was watching from the sideline. Allen said he wasn’t even supposed to play that day 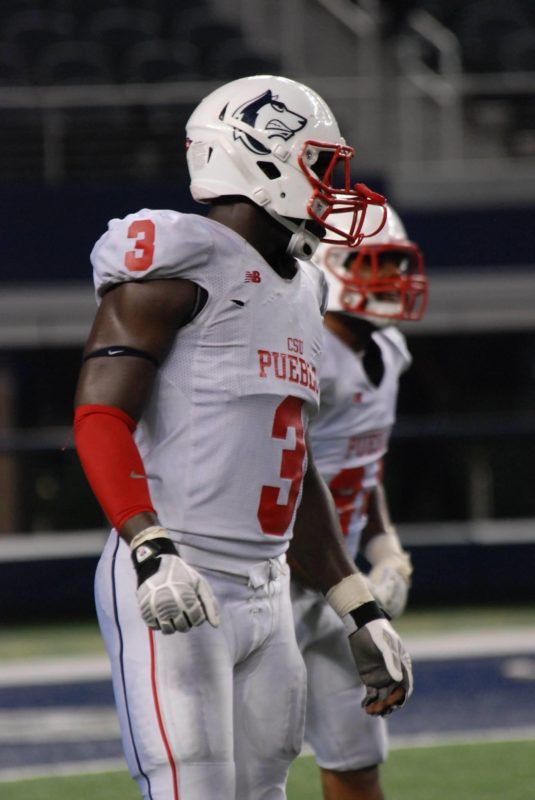 because he forgot to turn in a test.

“Coach came up to me and said, ‘I shouldn’t even travel you. You’re a prima donna,’” he recalled.

Allen said he was dumbfounded because his coach decided to play him late into the game.

“I think Dustin Vaughn was playing quarterback and he went to drop back. I’m coming off the edge and the tackle just grabbed me and it’s a lot of strength. He was pushing me down but I’m spinning closer to the quarterback. He happened to step up in the pocket right as I’m spinning inside and I squeezed my way through,” said Allen on his very first pass rush in college.

Allen wrapped up the quarterback for a sack with the game on the line. He was beyond ecstatic at the time as a freshman because he had just won the battle against an experienced West Texas A&M tackle.

And an unexpected turn to a day where he was supposed to sit out for the game.