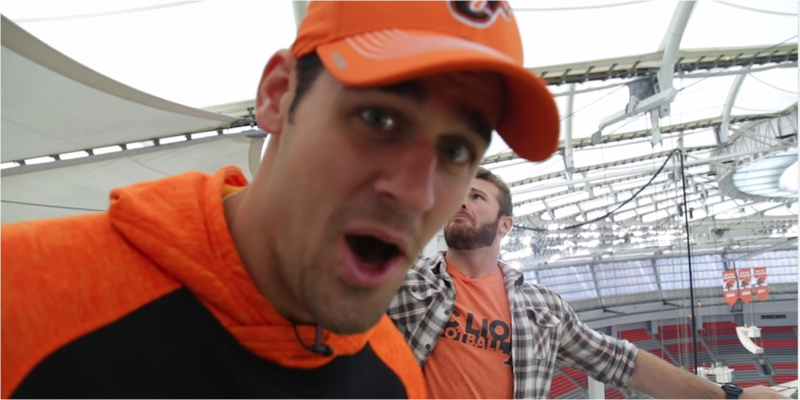 Darts and Bombs. It was the catchphrase Richie Leone and Mike Benson were known for in their two seasons with the BC Lions. Another brilliant memory of their time together in orange was the Stadium Cribs series filmed at venues across the CFL. Richie and Mike joined Matt Baker on episode 36 of 1st and Now to talk about a variety of topics, including some of those legendary Cribs moments.

“It was the best one-season spinoff, I think in the history of sports spinoffs,” stated Benson.

Leone responds by asking, “did we win a local Emmy for that or no?”

“I put one on my mantel. I made an Emmy myself, and it’s just a picture of you and me Rich,” responded Benson.”

“When I was with my friends this offseason, on YouTube, we’d search each other’s names to try to find something embarrassing. All of the Cribs popped up. We watched through all of them. Every now and then I’ll be bored or something or have those feels that you kind of want to reminisce. It is pretty cool.

It’s funny to watch. Mike is definitely so funny in all of that. I didn’t even get some of the jokes, like how we were in Montreal and there was this little concrete cutout of the stadium. You were just like, ‘this is where the Alouettes meet.’ There was a bunch of bird poop there so that was clever on your part. Not to mention, I learned what portaging meant that day.”

Under normal circumstances in 2020, Leone would have been back in Ottawa while Benson had signed a one-year deal with Montreal in free agency. Once the season got canceled, Leone was one of several players to opt-out of his contract in search of NFL opportunities. Leone was on the Arizona Cardinals’ practice squad for a few weeks and with the team for their week one victory at San Francisco. He also had workouts in Pittsburgh and Baltimore before returning home to Atlanta.

Benson has spent most of his extended offseason growing his personal training business- Pro Player U- and renovating his house in Winnipeg. As the weather cools and leaves continue to fall, both are missing CFL action and the annual push for the playoffs as games would get more important.

“We should be looking at the playoff picture. It’s starting to get fall (weather) down here. Mike has been in Ottawa when the fall comes and it’s got a beautiful fall. That gives me a lot of FOMO (Fear of Missing Out) the whole season. I’d rather be playing than doing anything else in the world. It really does suck and it’s definitely hitting hard right now.”

Added Benson: “I was out with the dogs, outside wearing shorts, and it went through my head that I hope they’ve got the sweatpants ready at practice. When you get out and go ‘it’s cool today, the sweatpants are going to be laid in the locker.’ That’s the kind of day I had today and that kind of just triggered some memories. Obviously, I’m missing football. I’m missing game day, missing the fans, missing the camaraderie with the teammates and my buddies, missing putting the helmet on and practicing. All of those things. It’s tough and it’s a weird thing to get used to.” 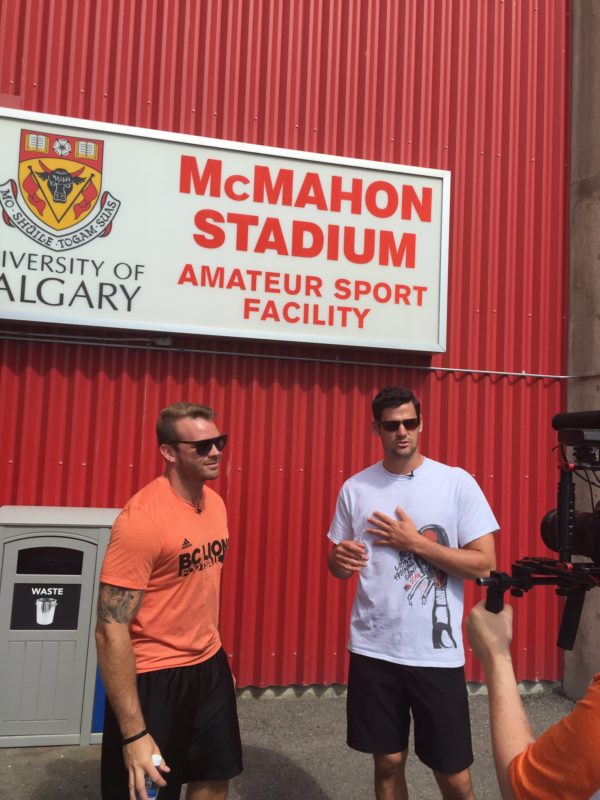 And along with Cribs, both players will forever share fond memories of suiting up for the Lions and all of the friendships they made along the way.

“I just feel like I kind of group up in Vancouver,” said Leone.

“It was the first time I had a job playing football and I loved it. Obviously meeting Mike and becoming so close with Mike and other guys on that team like Jon Jennings and Lulay, who I’m so close with, and playing for a guy like Wally meant a lot to me. Just friendships for life. Even Don Sweet, somebody who I am still in touch with. The city itself, just going through the ins and outs and ups and downs of pro football; it’s a place I’m very fond of and can’t believe it was five years ago.”

Added Benson: “Those are some of the best memories. I met my wife in Vancouver, Kira, my dog, got to hang out in Vancouver. And then playing under amazing coaches like Wally, all the other coaches that have all become acquaintances and friends, all the players, we’ll talk for the rest of our lives like Richie said. Playing with people for five years, forming those relationships, that’s one of a kind. I was just thankful to be able to say that I did that and lived in Vancouver for so long.”

No matter where they end up in 2021, most of us agree we might have to get together one day for a Cribs reboot.