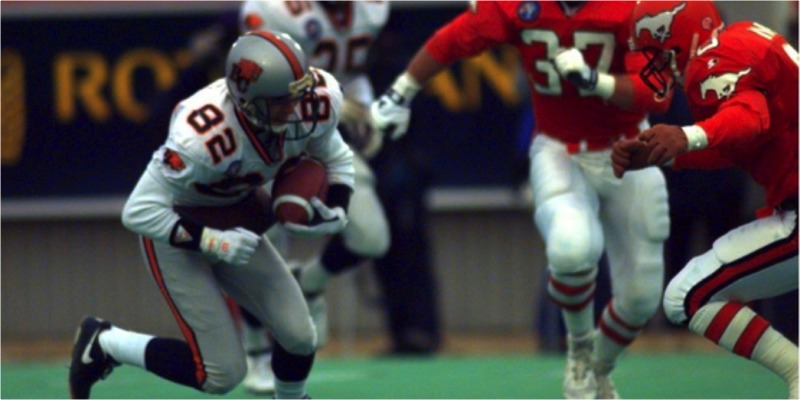 In a normal year, we’d be down to four teams in the Grey Cup tournament. Division Final weekend in the CFL is rarely a dud. And in many cases, one or both of the games to determine who plays for Earl Grey’s mug is better than the actual Grey Cup game itself. With six Grey Cup titles and ten total appearances in the big game, your BC Lions have a memorable history when it comes to the Western Final. With more, we take a look at five memorable Western Final wins plus a few honourable mentions.

The Backdrop: 1964 was all about “revenge” for Joe Kapp and a Lions squad coming off a loss to Hamilton in their first Grey Cup appearance at home in 1963. There would be no hangover. With a record of 11-2-3 (yes, three ties) and a suffocating defence that allowed a remarkable average of 10.5 points and 245 yards per game, the Lions cruised to a second straight 1st place finish in the West. Kapp also led the CFL with 2,816 passing yards in 1964. It all set the stage for a best-of-three showdown with the Calgary Stampeders.

The Games: Defence continued to do its thing as the Lions prevailed in the opener at McMahon Stadium by a 24-10 score. However, when the series shifted to Empire Stadium, Calgary wasn’t going to roll over. The visitors won a 14-10 defensive battle to set up a third and deciding game. Kapp and the offence would finally get rolling when it mattered most as the Lions cruised to a 33-14 win to punch their Grey Cup tickets for a second consecutive year.

The Aftermath: It was onto Toronto’s Exhibition Stadium and a rematch with Angelo Mosca and the Tiger-Cats in the 52nd Grey Cup. Bill Munsey scored two touchdowns- one on offence, one on defence- in the third quarter, while the Lions also got majors from Willie Fleming, Bob Swift and Jim Carphin in a 34-24 win and the elusive first Grey Cup title in franchise history.

The Backdrop: 1985 was the third straight year Winnipeg would travel to BC Place for the Western Final. The Lions prevailed 39-21 in 1983 and the Bombers took care of business 28-7 a year later en route to Grey Cup win. The rubber match was set after Roy Dewalt and the Lions secured 1st place with 13-3 regular season record. The pressure was on the home team to win and then sip from the Grey Cup for just the second time in franchise history.

The Game: A capacity crowd of 59, 478 screaming Lions fans packed BC Place that day. Dewalt recovered from his early turnover that led to a Winnipeg score and threw for three touchdowns. A ferocious Lions defence intercepted Bombers starting QB Tom Clements four times and then had another against his backup John Hufnagel. 42-22 was the final score. On to Montreal’s Olympic Stadium for another Grey Cup matchup with the Tiger-Cats.

The Aftermath: Once they got past their hated rivals from Winnipeg, there was no looking back. Dewalt’s 84-yard touchdown pass to Ned Armour was an early boost they needed and there was no looking back. Despite being without star receiver Mervyn Fernandez due to injury, the Lions offence was in fine form in a 37-24 win over Hamilton. It was the first Grey Cup victory as a head coach for Don Matthews. 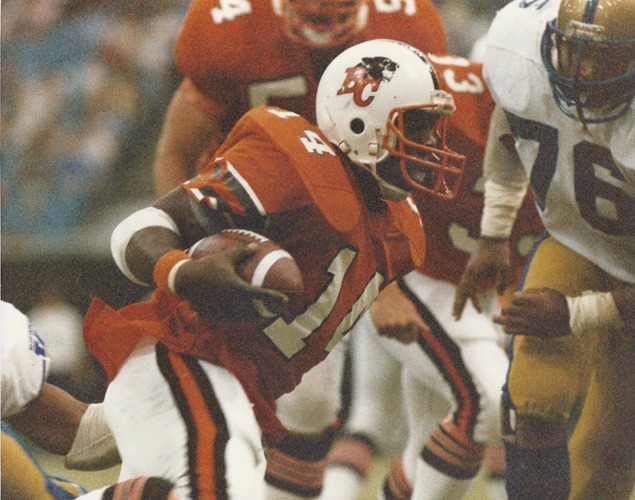 3. Playoff Bedlam Returns To Dome In ’04

The Backdrop: In the long run, events from the 2004 Lions season sparked a quarterback controversy. In the short term, Casey Printers provided fans with excitement they hadn’t witnessed since Doug Flutie’s remarkable 1991 campaign. With Printers replacing the injured Dave Dickenson for most of the regular season, the squad finished 13-5 and top spot in the West for the first time since 1999 only the second since 1985. Standing in their way of a spot in the Grey Cup was a very determined Saskatchewan Roughriders squad, led by quarterback Henry Burris.

The Game: Over 55,000 fans showed up for the biggest game in the city since 1994. Printers struck quickly with a long touchdown bomb to Ryan Thelwell on the second play from scrimmage, then was pulled for Dickenson when the offence was struggling in the second half. The veteran then drove the Lions into range for Duncan O’Mahony’s game-tying 47-yard field goal as time expired. Prior to that, the game had many momentum shifts. The Lions defence clutched up by recovering a Kenton Keith fumble on the Lions’ two-yard line with the game slipping out of reach in the second half. In the end, it was a classic “team” win.

Overtime is where it got really crazy. A Paul McCallum field goal miss from 18 yards out on the Riders’ lone possession meant all O’Mahony had to do was hit one from much closer than where he tied it. Final score: Lions 27 Roughriders 25.

The Aftermath: Wally Buono opted to go with Dickenson over Printers- earlier that week named CFL Most Outstanding Player- in the Grey Cup against Toronto. The real stories of this contest were the determination of Damon Allen on the other side and a shaky Lions kicking game. The Argonauts prevailed 27-19 and an impressive turnaround season ultimately ended on a sour note.

The Backdrop: The 2000 regular season was highlighted by inconsistency and the departure of head coach Greg Mohns to the XFL. Steve Burrato took over a team that was looking to erase the playoff failures of the previous couple of seasons. As the playoffs drew closer, pro football’s all-time leading scorer Lui Passaglia announced he would retire at season’s end. It proved to be a successful retirement mission.

The Game: After escaping Edmonton with a 34-32 win, Allen and the rejuvenated Lions headed to Calgary for a matchup with the heavily-favoured Stampeders team that was already planning to play in the Grey Cup in front of their home fans. The visitors who had packed for an extra week in Cowtown had other ideas. Allen threw for 312 yards and two majors, while the defence forced eight turnovers, including a big Eric Carter interception return for a major that set the tone early. Final score: 37-23 Lions. It was the perfect response after Calgary did the same thing to them in 1999: win the Western Final in their house to spoil the Grey Cup party.

The Aftermath: After taking over the Stampeders locker room, running game and stout defence were the pillars of a 28-26 win over Montreal for the franchise’s fourth Grey Cup win. Allen rushed for two touchdowns, while Robert Drummond ran for another. Passaglia’s field goal with 1:25 left proved to be the eventual winning points. It got interesting when Anthony Calvillo connected with Ben Cahoon for a 59-yard touchdown strike in the final minute. Thankfully, Chuck Levy broke up the two-point attempt to tie it and the Lions were champions for the fourth time in club history. The 2000 team was also the first in CFL history to win it all despite finishing below .500 in the regular season. 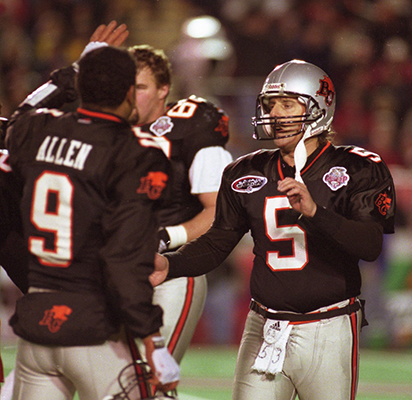 The Backdrop: Who could forget the magic of 1994? Despite an impressive 11-6-1 record, the Lions finished third in the West and were forced to take that familiar Alberta path in hopes of playing in the Grey Cup at home. They would ultimately need both of their quarterbacks, some big plays on both defence and special teams and need to overcome some inclement weather to get it done!

The Game: After knocking off Edmonton 24-23,  it was time to face their nemesis, the Calgary Stampeders. The Stamps as you may recall lured Doug Flutie away from the Lions prior to 1992 and had proceeded to have their way in pretty much every meeting since, including a victory in the 1993 Western Semi-Final. Re-watching this 1994 classic, one thing stands out: the hate between the two teams was real. Lots of chippy play between whistles and even a few punches were thrown.

Thankfully, the Lions had the better Flutie on this day. Darren caught three touchdown passes, including the winning score from Danny McManus as time expired to lift the Lions to one of the biggest upsets in league history. 37-36 final. Once the snow started falling to begin the fourth quarter, it truly became a November classic. Flutie’s heroics were set up when Ray Alexander blocked a Stampeders field goal attempt to keep the visitors between five and give McManus and company decent field position. All of this occurred after McManus had relieved the injured Kent Austin at quarterback. What a day it was.

The Aftermath: The Lions were back home and had an entire country behind them against a Baltimore team that was looking to steal the Cup away from Canada for the first time ever. They would need to wait a year in order to do that. With McManus once again pressed into relief duty, the Lions battled back to tie things up at 23. Passaglia’s go-ahead field goal attempt was wide with 1:02 to play but the defence would then hold down the fort to give them another chance to get into range. Lui made no mistake on his final try with zeroes on the clock and the Lions had completed one of the best underdog stories in pro football history. 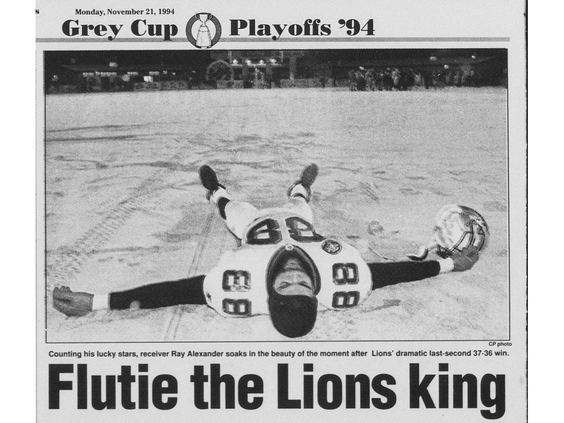 If you do the math above, we’re missing the two other wins that led to Grey Cup titles. Neither of those games was ever really in doubt, but they are worth mentioning in this space. In 2006, Dickenson and company thrashed Saskatchewan 45-18 to set up another Grey Cup triumph over Montreal in Winnipeg. 2006 was the third straight Western Final played at BC Place and was a nice response after getting beat at home by Edmonton in 2005.

The 2011 home win over Edmonton was best-remembered for Travis Lulay’s 61-yard touchdown scramble to put it out of reach. 40-23 final. The turnaround season was completed at home the next week with a 34-23 victory over Winnipeg in the 99th Grey Cup.

The first of those three straight meetings with Winnipeg in the 80s was also a memorable contest. In the first playoff game ever played at BC Place, Dewalt, Fernandez and the Lions offence scored 29 second half points in the 39-21 win before falling 18-17 at home to Toronto in the Grey Cup.